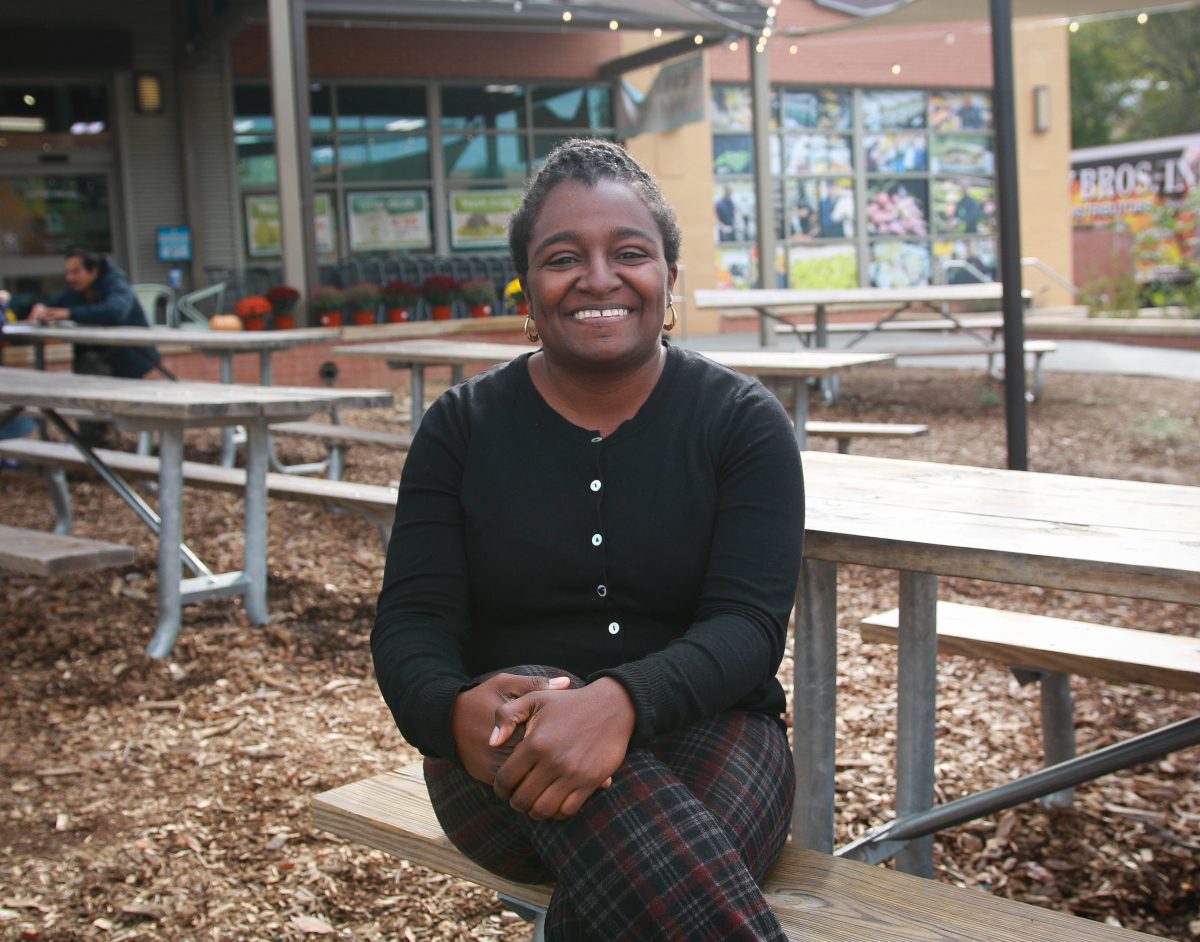 Among the targets was Jillian Johnson, Durham’s mayor pro tem and council member since 2015.

The challenger candidates, often joined by supporters in the audience, huffed skeptically when Johnson  dug into policy and community engagement plans like her “Beyond Policing” conflict resolution solution to gun violence in Durham.

Johnson remained calm, unemotional and confident. “I have tried very hard to focus on the issues and to not publicly criticize other candidates positions during the campaign. We just have different policies,” she said after the October forum.

Johnson is running for re-election for an at-large City Council seat. A big theme of her campaign is collaborative leadership, a commitment made concrete by her joint “Bull City Together” platform with fellow incumbents Charlie Reece and Javiera Caballero.

Johnson moved from Virginia to Durham in 1999, an 18-year-old Duke University freshman drawn to public policy and community activism. Four years later, she stayed, eager to put her newly earned degree to work for the city.

“Durham just felt like home. It felt like a place where I could do the kind of work I wanted to do, have the kind of community I was looking for, and have my kids in a diverse and fun city,” she said.


Though cool and often reserved in the council chambers, the one-term councilwoman has sparked controversy with her unashamed, leftist takes on gun violence and policing.

In 2016, she posted on Facebook that “the most dangerous people with guns are cops and soldiers.” In an interview with The News & Observer after that, she was quoted saying she believes that “the no-fly list and FBI anti-terror efforts are seriously corrupted by entrapment, racial profiling, and Islamophobia.”

Critics called for an apology; some wanted her to resign. But Johnson carried on.

Johnson’s 20-year history in Durham is deeply rooted in activism and the nonprofit sector. She co-founded Durham for All, a grassroots organization that works to mobilize people of all races and socio-economic status to support progressive candidates and causes.

She is the former director of operations and a current board member for the nonprofit, Southern Visions Alliance. The group supports teenagers and young adults working on social justice issues in the South.

While on the City Council, Johnson was a primary proponent of the raise in minimum wage for part-time Durham workers in 2018. She’s also the council representative for the Durham Housing Authority, Participatory Budgeting Steering Committee, and the Race/Equity Task Force.

The Bull City Together platform points that are most important to Johnson are promoting public safety and community facilitated conflict resolution, increasing eco-friendly infrastructure, and increasing affordable housing opportunities for residents, she said.

During a council budget working session in June, Johnson was one of four council members who rejected Police Chief C.J. Davis’ request for funding for additional police officers. The money was better spent on wages, they concluded.

Three challengers vying for council seats criticize that move. Although violent crime dropped in Durham in recent years, the city is seeing a spike in gun violence this year. That unwelcome shift was made especially stark this week, when several shootings, including drive by assaults, killed two people and injured eight. A 17-year-old was among the murdered.

At an Oct. 17 council candidate forum, Johnson said intervention and prevention are the keys to reducing violent crime in Durham’s inner city. “Unfortunately, in North Carolina we can’t stop people from carrying their guns around, but given that, it’s very important for people to learn how to deal with conflict in a healthy way,” Johnson said.

Intervention means engaging people at risk of committing gun violence on a peer-to-peer level, Johnson said. She likes gang-intervention programs like Project BUILD and Bull City United, which hires community members to try to diffuse conflicts before violence can occur.

The city recently invested in a couple of electric buses, some hybrid police cars, and solar panels on Durham Fire Station 17, Johnson said. And it will use energy efficiency infrastructure in the affordable housing council members hope to build.

“Everyone who believes in science and cares about the future is concerned about climate change,” Johnson said.

“We have a history of not having the same level of environmental amenities in places like east Durham,” she said, referring to the now gentrifying part of the city that for years was home to many low-income households.

Johnson’s “Housing First” philosophy depends upon passage of the $95 million Housing Bond, also on the ballot next week. “We have a $160 million five-year plan and the $95 million closes the funding gap between the money that the city gets from state and federal resources,” she said.

The money would help the city provide housing for over 15,000 Durham residents, primarily in permanently affordable units, supporters say. In partnership with the Durham Housing Authority, the council would use the money to build more multi-family rental housing like the Willard Street apartment project, which includes 80 units of permanently affordable housing for people at or below 60% of the area’s median income, Johnson said.

City Council candidate Jackie Wagstaff has been skeptical that the City Council will create permanent affordable housing. But Housing Authority housing is by its nature permanently affordable, Johnson noted.

The city needs private developers to help expand affordable housing too, even though the units would likely remain affordable for a limited time: 15 to 20 years, Johnson said. “People need housing now, and so we might build housing with a 15 or 20 year affordability period knowing we’re not getting the permanent affordability that we really want because the trade off is we can get people into housing now,” she said.

Johnson, Caballero, and Reece’s joint platform has not been embraced by all. Challengers accuse the incumbents of being interchangeable. Where others see weakness, Johnson sees strength.

“You can’t do anything on council on your own. I think the idea that this sort of collaboration is anti-democratic is misguided. We have to work together, we have to collaborate, we have to have a shared vision, and shared policies in order to make anything happen in the city,” she said.