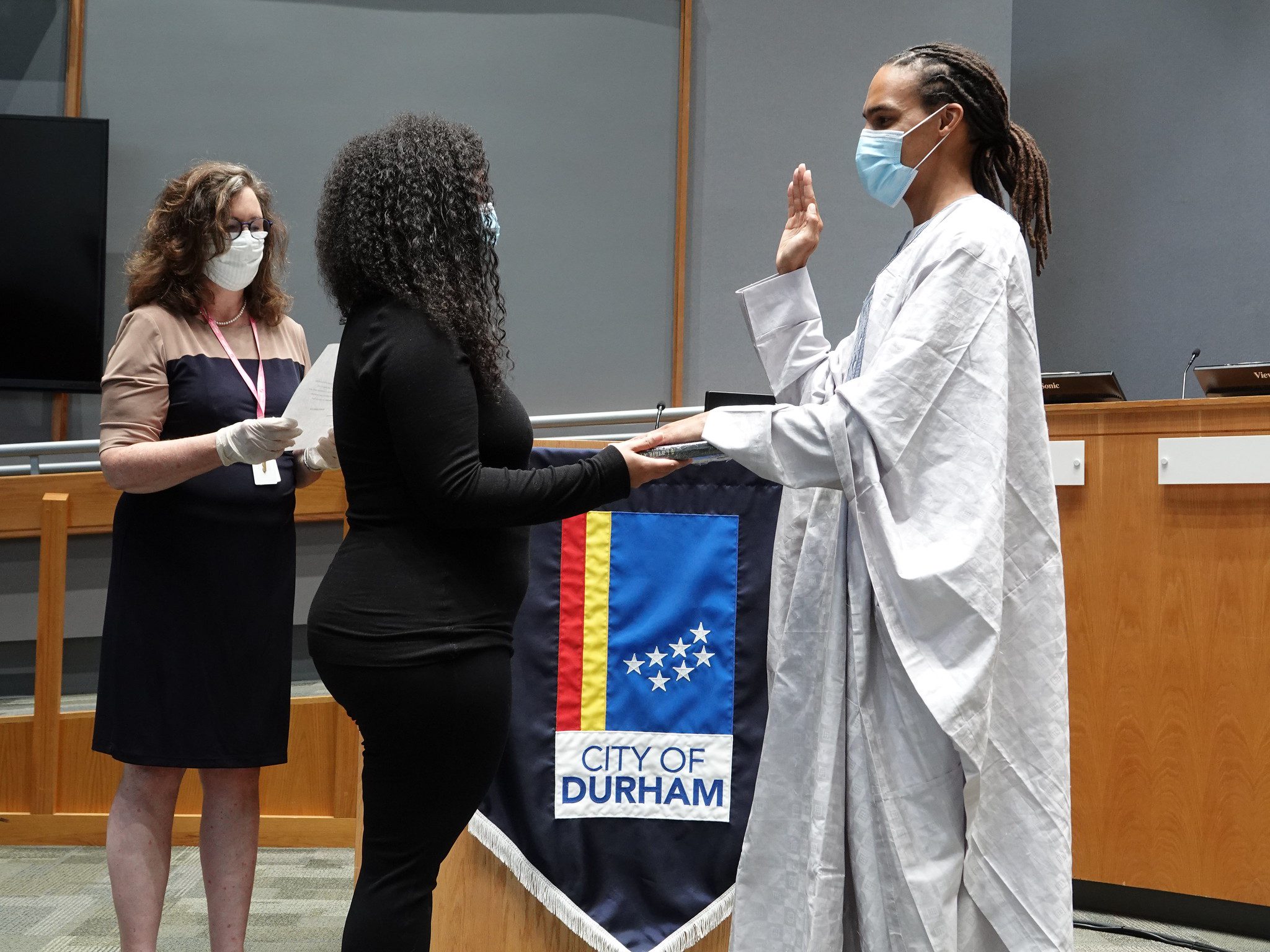 Sworn in today, Freelon was selected in a 4-2 vote Monday, taking the position left empty when Vernetta Alston was appointed to the NC House representing District 29 in April.

Freelon pointed to poverty as one of the biggest challenges facing the city in his online interview with council members last week. “Poverty is a policy choice,” he said, tying violence, crime, the impacts of the coronavirus pandemic on Black, Indigenous, and communities of color and a shortage of affordable housing to poverty.

He said Durham must acknowledge the city government’s historic role in zoning and development that harmed communities of color and push for inclusiveness, such as multi-class, inter-generational involvement in city decisions.

During the interview, Freelon said his budget  priorities include ensuring no city workers will be laid off because of the pandemic, supporting Durham as a cultural and artistic center, and continuing the COVID smart response of the current council. Freelon also drew parallels between COVID-19 and the racism experienced by communities of color.

“Because when you’re black and you get hit by the storm, it’s not just the rain and the wind, it’s the tempest of racism,” said Freelon. “When you’re black and brown and there’s a virus, the diagnosis itself can be dire, but it’s the plague of white supremacy and poverty that exacerbates the havoc that black folks are experiencing,” he said.

Council members DeDreana Freeman and Mark-Anthony Middleton voted for Daniels-Kenney, a clinical social worker who for many years has worked to expand mental health and addiction treatment, among other things.

During the council interviews, Middleton questioned Freelon on his residential status. The two went back and forth for about four minutes, with Middleton asking whether Freelon moved to Ward 3 this year to seek the appointment. Freelon said he has lived at his current address since March of this year. He also said he’s lived in the ward for a total of 10 years at various times.

After the first vote, Schewel gave council members the chance to make the vote for Freelon unanimous. Middleton and Freeman did not respond, producing an awkward silence.

Schewel praised Freelon after the vote. ”Pierce Freelon emerged as the council’s choice because he is generous, brave, straightforward, incredibly knowledgeable on the issues that face us, and a powerful voice for the new generation of Durham,” he wrote in a press release.

Freelon’s appointment comes after two unsuccessful runs for office in Durham in the last three years. Schewel thwarted the first in 2017 when Freelon finished third out of six Democratic candidates competing to succeed former Mayor Bill Bell. In March, Freelon finished second to Natalie Murdock in a primary race for the District 20 state Senate seat.

Ward 3 stretches north and south on the western side of Durham, from below Route 54 to above Interstate 85. Although Freelon ran on the principles of black liberation and reparations, the ward, which includes Duke University, is majority white.

Freelon, 36, is a Durham native and the son of the late architect Phil Freelon, who spearheaded the design of the National Museum of African American History and Culture in Washington, D.C., and Nnenna Freelon, a Grammy-nominated jazz singer.

A musician, he is founder of the digital maker space and creative center, Blackspace, whose artistic workshops offer youth of African descent “a breathing space to manifest their dreams by any medium necessary”.  He and his wife, Katye Proctor Freelon, have two children.

Freelon’s appointment runs through 2021. If he wants to remain on the council, he’ll need to run for re-election in November.

9th Street reporter Cameron Oglesby can be reached at cameron.oglesby@duke.edu

At top: Pierce Freelon wore an agbada, a robe worn by men in parts of West Africa, when sworn in a new City Council member on Friday. He is facing his wife, Katye Proctor Freelon. Photo courtesy of the City of Durham