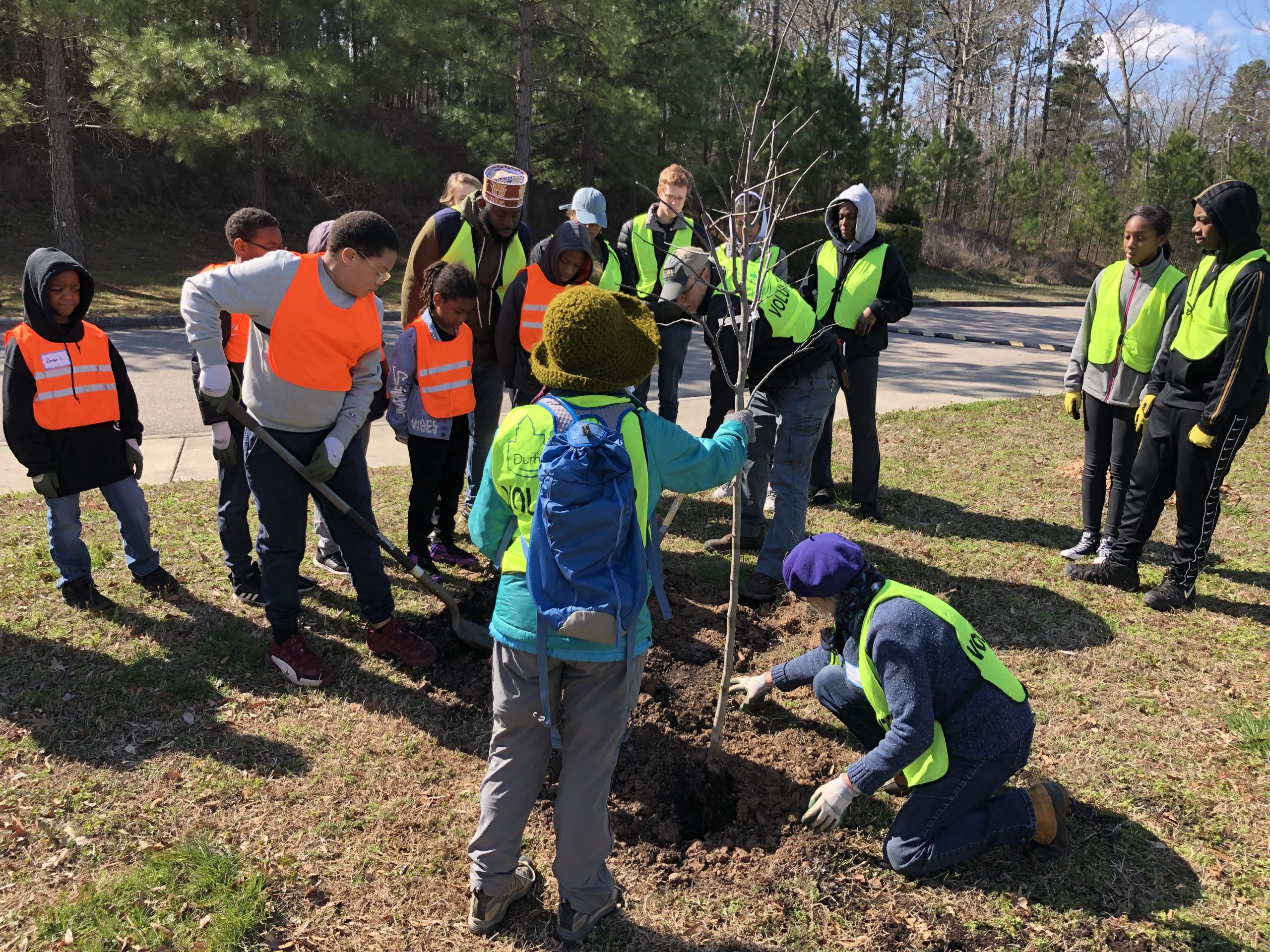 For almost three years now, the city of Durham has committed to planting 1,500 trees a year, nearly all of them in low-income communities.

The city’s initiative to add more street trees is an effort to maintain Durham’s canopy and address historic discrimination that extended even to the ground between streets and sidewalks.

But this ambitious program faces questions about how it will be funded, and whether the rapid development in Durham’s booming real estate market will uproot trees as quickly as new ones are planted.

“The city is doing more and they have this goal,” said Katie Rose Levin, executive director of TreesDurham, an advocacy group. “It’s just a matter of ‘Now that you know the right thing to do, you actually have to pay for it.’”

When the program was launched in 2018, the plan was to pay for it with a mix of private and public funds, according to Durham Mayor Steve Schewel.

Schewel said the city never intended to pay for the program by itself. “I don’t think it’ll ever be true that there won’t be private donations for tree planting,” he said. “But I’m sure that the city will continue to fund more and more trees. I agree that we need to be increasing public funding for it.”

Slightly more than half the funding this planting season, around $65,500, will come from nonprofit Keep Durham Beautiful, which works very closely with the city. In fact, its executive director, Tania Dautlick, is paid by the city and works in the city’s General Services building.

The rest of the money, around $60,000, is supposed to come from donations to the city, which is cobbling together its share from tree-planting donations citizens make in their water bills, stormwater funds and donations from Duke, through its carbon offsets program.

There is no sizable, recurring line item in the city budget for the tree initiative. Last year, the city came up with its share, nearly $68,000, through the participatory budgeting process, a one-time community budgeting source.

When asked if Keep Durham Beautiful had the same understanding of where funding would be coming from and the nonprofit’s role in funding this program as Schewel, Dautlick said: “The City continues to support the tree planting program, while leveraging additional community resources to meet its goals. The City has always worked closely with Keep Durham Beautiful and other community partners, as part of its ongoing tree planting partnerships and will continue to do so in the future.”

This lack of a guaranteed source of city funding worries tree advocates inside and outside City Hall. The city’s share of the funding for this year has not started flowing yet, and planting season begins in November.

“We actually don’t have funding for our tree-planting program as of right now,” said Daniel Hickey, the city’s tree-planting coordinator.  “We were expecting to get it this year, but due to COVID, there’s been a lot of, you know, stalls with funding,” said Hickey.

Dautlick said that Keep Durham Beautiful will continue to support the project every year. But Hickey worries about the impact of the pandemic.

“I think my concern is how many years in this post-COVID economic depression are there still going to be donors,” he said. “If we don’t have a tree-planting budget and the donors dry up, we’re going to have to get really creative.”

“Durham will continue to have a tree-planting program.” said Lilley, whose agency includes the city’s urban forestry unit. “We have a remarkable staff and wonderful community partners who find creative ways to fund the program,” he said in an email.

Schewel agreed. “The city is 100 percent committed to planting at least 1,500 trees a year. That’s a commitment of the City Council,” he said.

Schewel has made the 1,500-tree initiative one of his signature programs, an effort to not only  beautify Durham and provide shade, but also to provide a measure of social justice. The goal of the program is to plant 85 percent of the new trees in low-income neighborhoods.

TreesDurham, an environmental justice non-profit dedicated to protecting forests and creating environmental equality across Durham, was established in 2018, when the city had no formal plan for its tree plantings. Without Durham’s former urban forester, Alex Johnson and Keep Durham Beautiful,  dying trees wouldn’t have been replaced at all, Levin said.

However, it wasn’t enough to replace dying trees; historic redlining practices had left many low-income and minority communities without much needed greenspace.

“When the research came out showing the racial distribution of trees . . . if we just replanted the trees where they died, we perpetuated this racial inequality,” Levin said.

“We have two problems,” said Schewel. “One of our problems is that we’re losing our tree canopy, but an equally important problem is that our tree canopy is inequitably distributed. This is a racial justice issue, and we have to be able to help correct that inequity.”

But the reality facing the tree-planting program, besides the need for long-term funding sources, is  the impact of the bulldozers and chainsaws that have been reshaping the urban landscape.

As developers have discovered Durham over the past two decades, the fate of the city’s trees has become bound up in concerns about growth, gentrification, and the health of neighborhoods.

The coronavirus pandemic has made apparent the need for tree cover and greenspace in urban settings and in lower income communities. Tree cover helps to reduce urban heat island effects and local air pollution, lowering air and ground temperatures through shading and the absorption of carbon dioxide.

“If you live in a place that doesn’t have trees, your house and your yard is 10 degrees hotter than people who live around trees,” said Levin, noting that those communities without adequate tree cover are also known to have higher rates of asthma, diabetes, or immune-compromising conditions.

Several neighborhoods including Braggtown, Walltown, and Merrick Moore are currently fighting developers that plan to cut down local woodlands.

“We can’t plant our way out of this, we have to preserve trees, and we have to stop emitting,” Levin insisted.

Schewel said that when land is developed, about 85 percent of the trees, on average, come down. “With so many people moving here, we’re not trying to stop development. But what we do need to do is strengthen our regulations around tree preservation.”

When he began advocating for the tree initiative Durham was planting around 750 trees annually. Doubling that was a start.

Schewel has modeled the program after a similar one in Charlotte that also depends in part on private contributions, and his goal is to eventually get to 3,000 trees a year.

Durham’s 36,000 acres of tree canopy currently covers around 52 percent of the city. The goal is 55 percent by 2040, a challenging goal given the pace of development.

Hickey, the tree-planting coordinator, questions the value of that metric.

“I don’t think that we should have a canopy on our plan,” he said. “It just makes no sense because so much of the land in Durham is privately held and developers are just going to do whatever they want anyway.”

9th Street journalist Cameron Oglesby can be reached at cameron.oglesby@duke.edu.