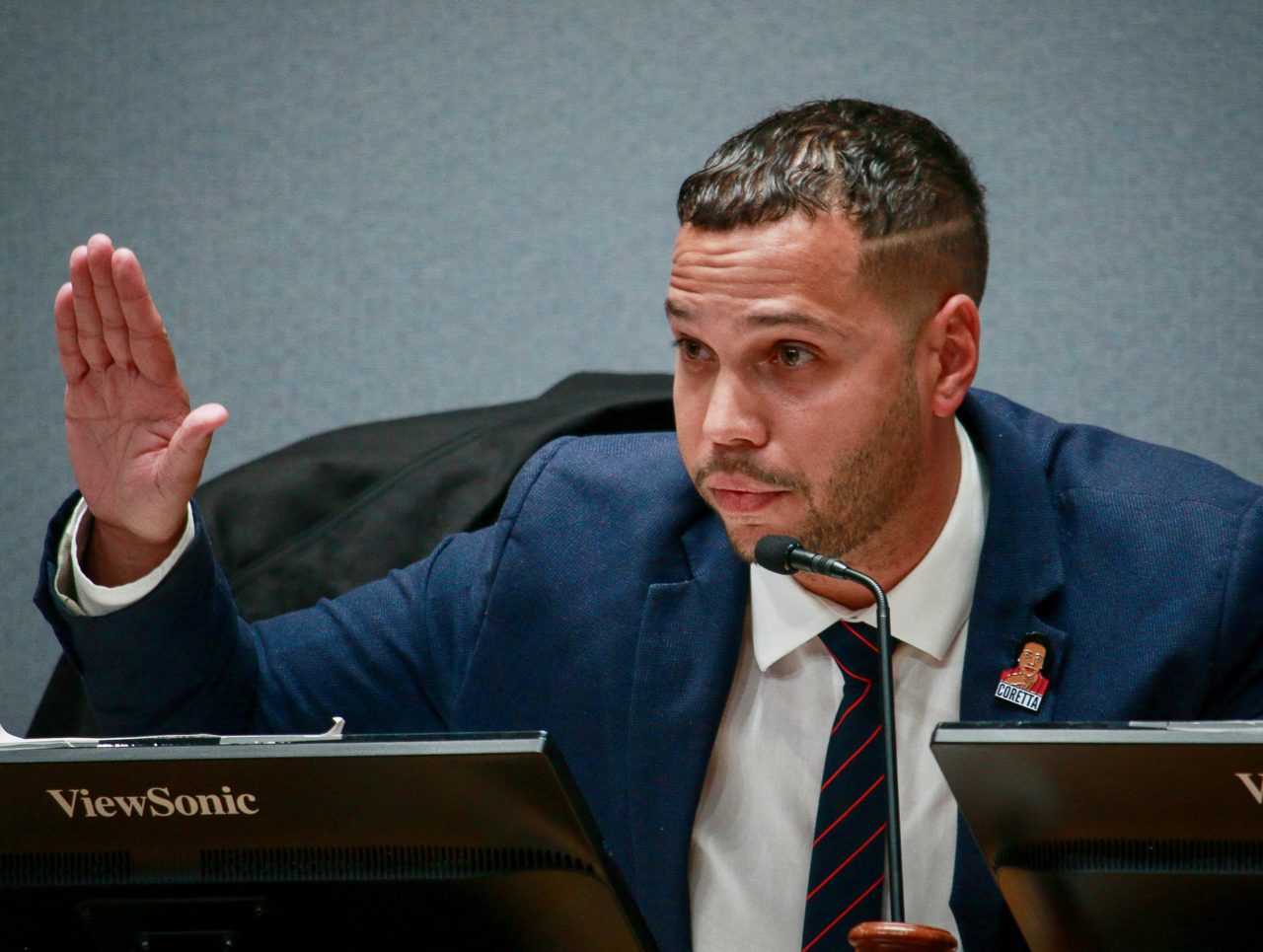 In a music video dropped in May called “What a Wonderful Durham,” Joshua Gunn sits at a desk in a high school classroom. Wearing a black windbreaker and a Durham Bulls cap, he raps about his dream for a future Durham.

There are no ICE raids, he says. No one loses a home to gentrification. No food deserts. All religions, races and genders are respected. Everybody has health care. Opportunity abounds.

Five months later, in Durham’s city council chambers, Gunn is wearing a navy jacket, crisp white shirt and a red striped tie. A Gunn for City Council button is pinned to his lapel.

He’s explaining his dream again, not with rap but with data about crime, poverty and economic development needs. And he’s taking aim at three incumbent council members whose shared campaign platform, he says, doesn’t serve all of Durham.

“We have a homicide rate that has doubled from 2018 to 2019, we have a crisis of public safety in our community, and I fear that our council lacks the proper perspectives to address those concerns,” Gunn said.

Gunn’s family has been in Durham, where he grew up, for four generations. After leaving to pursue his music career, Gunn said he found a changed city when he returned in 2013. New condos, apartments and restaurants lined downtown. While some of change was positive, Gunn noticed stark problems with the way the city was growing.

“There was a food scene and a theater scene, and all these amazing new additions to our community,” Gunn said. “But on the other side of that, I noticed that people were being displaced and that not all of Durham was being able to participate.”

Gunn quickly got involved, co-founding the annual festival Black August in the Park to “celebrate blackness.” He and friends launched the annual Black Market, a gathering for black owned businesses to gain exposure and to network. Gunn is still rapping and works at the Durham Chamber of Commerce, where he is a vice president. He tries to bring new jobs to Durham and help existing businesses expand, he said.

The fourth-place finisher in last month’s primary and youngest candidate in the race at age 35, Gunn continues to build his campaign. A campaign disclosure report filed early this month counted only $4,608 in contributions, but he’s fundraising.

And Gunn has notched some key endorsements. Current city councilman Mark-Anthony Middleton, not on the ballot this year, supports Gunn. So does former Durham Mayor Bill Bell.

Middleton said he endorsed Gunn because of his intelligence and his ability to bring a wide range of voices to the council. As a young hip hop artist, Gunn can bring a new demographic  into the fold, Middleton said.

“He’s a generational voice and he pulls from a lot of different areas of experience, from business to activism to the arts community. He’s one of those rare candidates that brings so many different elements,” Middleton said.

Like Gunn, Middleton is concerned by the nature of the three incumbents’ shared platform, called Bull City Together. “From a democratic point of view, when you have three people that are currently sitting on a deliberative body, telegraphing publicly that they’ve already made up their minds on some things, prior to having any public debate, I think that should give us all pause,” he said.

In his campaign, Gunn emphasizes the need for more comprehensive economic development, more direct and pragmatic crime prevention, and an affordable housing solution that is linked to accessible jobs.

The Jordan High School and North Carolina A&T grad says he sees an absence of engagement from city council members with the private sector.

“Real estate developers are going to build what’s easiest for them if we don’t engage with them,” Gunn said. And what’s easiest are the luxury apartment buildings that seem to be taking over downtown, in lieu of offices and other commercial developments that bring jobs.

To help get Durham’s economy on track for everyone who lives here, Gunn favors incentivizing business development downtown. “Downtown is a live, work, play environment,” Gunn said, “but work is a very important component of that.”

Gunn says his top priorities are the economy and public safety, issues that are closely connected.

Despite a decline in recent years, Durham is experiencing an uptick in violent crime and gun violence. Members of the Durham community are split on how best to approach a solution, candidate forums have made clear.

When Durham Police Chief Cerelyn Davis requested 72 more officers for her department in March, the city council denied her funding. Later, a split council vote denied a compromise that would have funded 18 officers.

The short-term route to improving public safety is to trust Chief Davis and give her what she needs to run her department, Gunn said. As a black man, he understands the complex and sometimes painful relationships between residents and officers. But Davis is focusing on the right ways to train a police force, including using de-escalation techniques, implicit bias training, and crisis response services, he said.

Most of these issues can be traced back to a lack of long-term, comprehensive planning, he said.

“The bond overemphasizes downtown,” Gunn said, and doesn’t do enough to expand jobs where people can afford to live. Many of Durham’s jobs that pay above the living wage are located outside of downtown, he said.

Gunn’s platform emphasizes policy, but it is also fueled by his desire to expand points of view on city council council.

Gunn said he wants a spot on the council for the Durhamites who do not live in the booming downtown core. That includes people who are facing the impacts of gentrification and poverty, and who are struggling to make progress in a city that is celebrated as being the most progressive in the area.