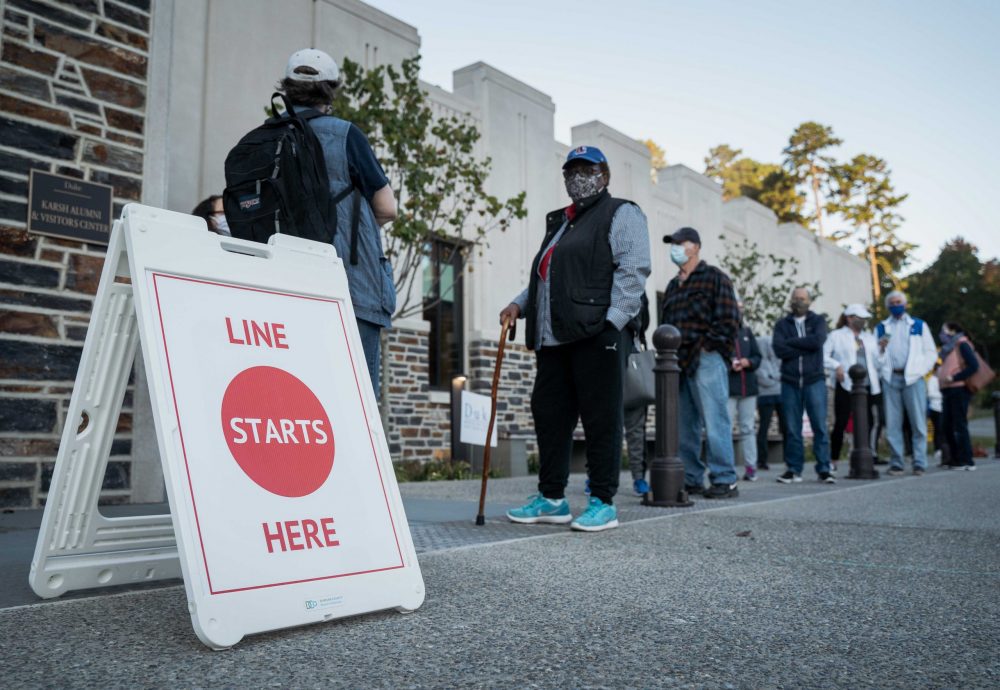 Four years ago, the number of absentee and in-person early voting ballots cast in North Carolina crushed records. But those records didn’t stand a chance against this year’s stunning numbers.

Absentee ballots, which include mail-in and in-person early voting, have revealed the intense interest in the 2020 election. A surge of mail-in voting could be expected during a global pandemic, but the numbers suggest COVID-19 is not the sole reason behind the state’s record-shattering count.

The tally is so staggering that Damon Circosta, chair of the North Carolina Board of Elections, said he “absolutely believe[s] that this will be the largest turnout in the history of North Carolina.”

What the numbers tell us

With two days of early voting still to go, more than 4 million North Carolina voters have already cast their ballots. For perspective, 2.5 million people had voted at this point in 2016, and the early voting period ended with 3.1 million total ballots cast.

Unaffiliated voters also requested more mail-in ballots than did Republicans – a little under twice as many.  In total, only 287,552 Republican voters chose to request a mail-in ballot, making up 19% of all requests.

The most revealing aspect of this year’s vote is the amount of early voting that has been done in person.

Compared with 2016, nearly 1 million more voters cast their ballot at in-person early voting sites. This is often referred to as one-stop voting, because you can register and cast your ballot at the same time.

Even with the threat of the coronavirus, in-person early voters account for about 78% of all absentee ballots cast.

The massive jump in the number of mail-in ballots compared to 2016 – more than a sixfold increase, to 883,964 – can partly be explained by the pandemic. Voters who would normally head to the polls are now sending in their vote from a safe distance. But the overall growth of early voting suggests a bigger force at work.

Mac McCorkle, a Duke University public policy professor and longtime Democratic consultant, said the pandemic has actually opened up new avenues of voting, because mail-in ballots are now more widely accessible than ever before.

Strong feelings about the race are also likely playing a role, he said. There’s passionate voters on both sides, and that increases overall turnout. “The realistic view is that each side’s turnout enthusiasm magnifies and expands the other’s,” McCorkle said.

Circosta, chair of the North Carolina Board of Elections, said he also sees more energy and enthusiasm from voters. “This year, everybody is talking about [the election],” he said. “It’s not just in the media and not just on the news, it’s a topic of constant conversation.”

The influx of early voters is a relatively new phenomenon, Circosta said. The rhythms of election years have gradually changed as the state has allowed more early voting. The trend began in 2008, when North Carolina first established one-stop voting.

“There used to be an Election Day,” Circosta said, “and now Election Day is like the last call for voting.”

Election Day will still be busy, but Circosta says counting all the votes won’t be the problem. The state is well suited for the high numbers of early ballots it’s receiving this year.

“North Carolina is lucky to have laws in place that have let us begin the preparation for counting all of the absentee ballots, both for early voting and absentee vote by mail,” Circosta said. “I anticipate us being able to achieve that task quicker than most other states.”

Voters lined up on the first day of early voting – and kept coming. Photo by Henry Haggart | The 9th Street Journal