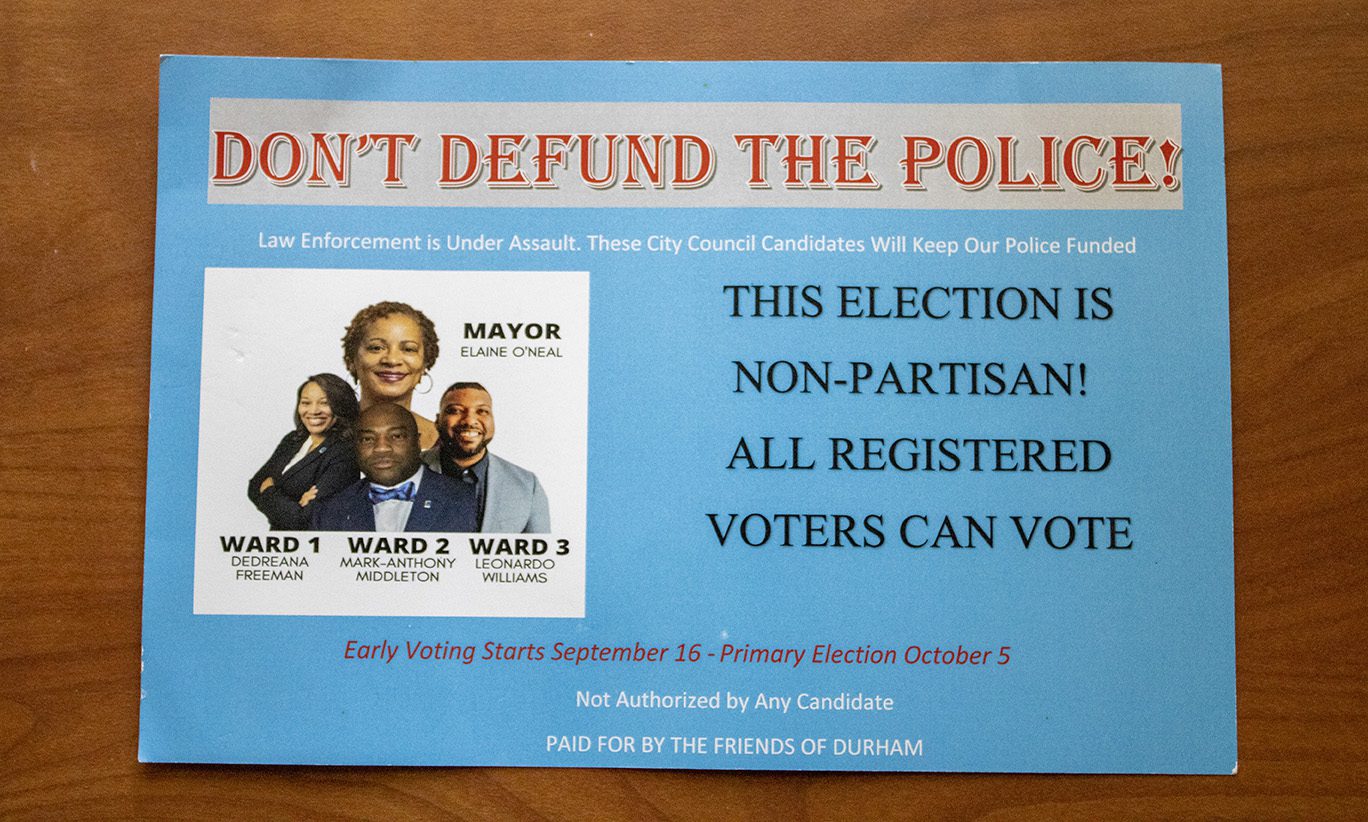 By Caroline Petrow-Cohen on November 1, 2021

The flyer that arrived in Durham voters’ mailboxes had an urgent message: “Don’t defund the police!” it said in capital red letters. “Law enforcement is under assault.”

The mailer, distributed in September by the Friends of Durham political action committee, endorses Elaine O’Neal for mayor, incumbents DeDreana Freeman and Mark-Anthony Middleton for City Council Wards I and II, and Leonardo Williams for Ward III.

Friends of Durham supports the slate of candidates for one specific reason, the mailer says: “These City Council candidates will keep our police funded.”

In reality, it’s not that simple. Many of Durham’s candidates hold nuanced views on police funding that the mailer’s definitive language doesn’t capture. But the mailer itself and the candidates’ reactions to its pointed messaging offer a revealing window into the world of Durham politics.

How do O’Neal and Caballero compare on policing?

Since Minneapolis police murdered George Floyd in May 2020, the nation has wrestled with violence and racism pervasive in law enforcement. In Durham, large swaths of the community called to defund or abolish the police.

Throughout the summer following Floyd’s death, Durhamites took to the streets to protest traditional policing and racial injustice. In June 2020, during the public comment period of a City Council meeting regarding the city budget, activists urged Durham’s leaders to decrease police funding.

The city launched a new Community Safety Department in response last May. The department will run pilot programs aimed to determine effective alternatives to policing, including responding to 911 calls with unarmed mental health professionals. Still, despite public pressure to do so, the current City Council has never decreased the police budget.

Friends of Durham chair Alice Sharpe said that her organization’s mailer was prompted by Javiera Caballero’s statements during a City Council meeting on June 15, 2020. Caballero, who is currently serving as an at-large City Council member, suspended her mayoral campaign on Oct. 11 after receiving far fewer votes than O’Neal in the primary.

“I wholeheartedly believe in defunding the police,” Caballero said at the meeting. “I know what I want in the future of Durham, and I want less police.”

Later in the meeting, Caballero still voted with the rest of City Council to unanimously approve a new city budget that included a routine increase in police funding.

More than a year later, Sharpe and Friends of Durham have not forgotten Caballero’s statements. The organization sent out the mailer because it wanted voters to know which candidates would fight to keep the police funded, Sharpe said.

But in contrast with the mailer’s black-and-white language, O’Neal’s position on policing isn’t very firm. And it might not be too different from Caballero’s own stance.

Both Caballero and O’Neal have said they support community-driven alternatives to policing, like the ones that will be tested by the Community Safety Department. They also both want to keep the Durham Police Department sufficiently funded, at least until there are proper structures in place that would allow the department to function with less resources.

“I do believe that it’s necessary for us to continue to support our police until we can build up community capacity,” O’Neal said in an interview with The 9th Street Journal. “We don’t have to choose between being supportive of our law enforcement agencies and also being innovative with public safety. We can do both in Durham.”

If executed properly, this plan eventually would lead to defunding the Durham police, Caballero said. She clarified that defunding, in this case, doesn’t mean abolition or even slashing the police budget to shreds. It just means diverting resources away from the police once they are no longer needed.

O’Neal has provided fewer details about her vision for the role of the new department. It’s not meant to replace the police, she said, but she can’t predict how things will unfold. When asked if she thought the Community Safety Department might eventually have the capacity to relieve police officers of some of their traditional duties, like responding to medical emergencies or domestic disputes, she declined to speculate.

“That’s like asking me if I have a crystal ball,” O’Neal said. “I would hope one day we could get to the place where we could manage without armed citizens … but that’s a hope. Whether that would actually become a reality, I’ll wait till we get there.”

A window into Durham politics

Technically, the Friends of Durham mailer is accurate: O’Neal has no plans to defund the police. Neither does City Council Member Mark-Anthony Middleton, who’s running for reelection and is also endorsed on the mailer.

Like both Caballero and O’Neal, Middleton doesn’t think the Durham Police Department should be the city’s only approach to public safety. He wants a robust, fully-funded department, he said, but he understands the flaws in policing, too.

“A fully-funded police department does not preclude us from having other tools in our toolbox that will help us keep Black and brown people and mentally distressed people alive,” Middleton said. “That’s my position. It’s not either or, it’s this and that.”

In an interview before she withdrew from the mayoral race, Caballero said that the Friends of Durham mailer over-simplifies the question of police funding and fuels polarization. “Clearly, this is the issue that they’re creating a wedge with,” she said. “I think that folks are trying to create division, and that’s politics.”

Marion T. Johnson, who’s challenging DeDreana Freeman in the Ward I City Council race, also found the mailer’s messaging unnecessarily divisive. “I was disappointed when I saw it because I don’t think that it really serves our communities at all to lean on that sort of politics of fear,” Johnson said.

Johnson is “committed to no longer investing in a system that generally over polices and over criminalizes Black and brown folks.” But abolishing the police overnight will not make anyone safer either, she said.

The challenge of community safety requires careful discussion and attention to detail, Johnson said, not an all-or-nothing approach. “All of us who are running for office are fully capable of — and really committed to — having nuanced conversations about what true community safety is and what our communities need,” she said.

The Friends of Durham mailer doesn’t encourage those nuanced conversations, but that probably wasn’t its intention, Caballero said. As a political action committee, Friends of Durham is entitled to frame its messaging however they please, she said.

Sharpe acknowledged that the mailer was likely to antagonize some people. It takes a strong stance, she said. To influence Durham voters, that might be an effective strategy.

“It may be pointed, I’ll grant you that,” Sharpe said of the mailer. “We were trying to make a point.”

The 9th Street Journal will continue to cover the city elections. Check with us Election Day for updates and results. You can submit questions and news tips to our staff by emailing jacob.sheridan@duke.edu or julianna.rennie@duke.edu.

At top: A political mailer sent by the Friends of Durham political action committee endorses a slate of candidates that it suggests won’t “defund the police.” 9th Street photo by Josie Vonk.