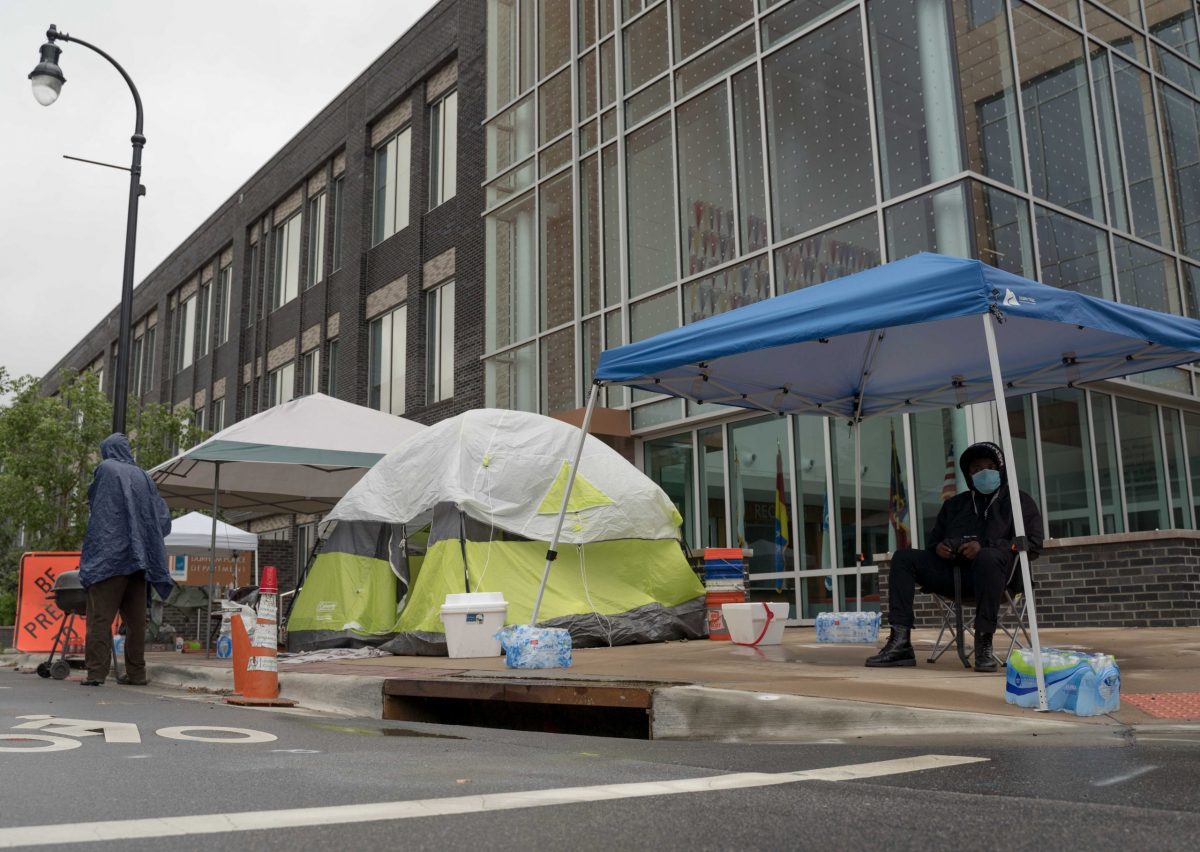 For the second time this month, frustration and outrage over police misconduct against Black people dominated a Durham City Council meeting on Monday.

Before that vote, council members passed the Durham City Council Statement on Community Health and Safety, which commits the city council to continue the process to “transform policing” in Durham.

Written primarily by Mayor Steve Schewel and Mayor Pro Tem Jillian Johnson, the statement calls for reforming the Durham Police Department’s use-of-force policies.  It also requires an analysis of 911 calls to identify police activities, such as responding to mental health crises, that other city departments could handle.

The statement pledges $1 million to fund a Community Safety and Wellness Task Force. Johnson championed the body last year as a means to research and present proposals for alternative community safety measures.

Schewel and Johnson emphasized that $1 million was not the only amount elected officials will commit to new community safety measures.

“A million dollars is a down-payment on the work we need to do to be transforming community safety in Durham,” Schewel said.

“I think the million, even as an initial down payment, the pure power of the symbolism of it is just not enough,” Middleton said.

He criticized what he felt was the council’s reluctance to commit at least $2 million to exploring measures, such as universal basic income, which he says would help reduce crime by addressing poverty, a root cause.

“I think we have an opportunity to literally transform the budgetary culture of our city and be a beacon for the rest of the world,” he added. “Do you want to put police out of business? Let’s start spending real money on those things that will put them out of business.”

Middleton noted that the city council spent $2.4 million in 2018 on the Durham Participatory Budgeting initiative spearheaded by Johnson.

“Some of us fought like hell for $2 million for participatory budgeting, and 60% of the voters were white,” Middleton said. “We need to fight like hell now to send the right message for the folk that are dying right now.”

Council member Freeman said she would have preferred a figure closer to $11 million.

“It’s almost like we’re saying that these Black lives are worth a million dollars,” she said. “It just doesn’t feel right.”

Johnson, Reece, and Caballero campaigned last fall on a joint platform that included addressing police brutality and developing new community safety institutions. They have favored decreasing the police budget and reducing the number of officers while supporting community-led task forces to create proposals for community safety.

While Freeman and Middleton have also supported calls for police reform, on Monday they emphasized the continuing need for policing due to what they say are unacceptable levels of violent crime affecting lower-income neighborhoods in Durham.

Freeman and Middleton also questioned the need for a task force to investigate solutions that they said the city council and community already understand.

“I don’t need the task force to tell me that mentally ill people don’t need people with guns being the primary responder,” Middleton said. “We can move on that now. And we can start preparing the groundwork now for a budgetary revolution.”

Freeman emphasized that some in Durham are alarmed by campaigns to defund the police.

“The people I speak to in the community have a very different understanding of what that means and how it’s going to impact their lives,” Freeman said. “There’s a whole lot of folks that we are scaring this evening, and we have to be mindful of the fact that they are still residents in this community, and they deserve to be represented.”

Approval of the statement passed 4 to 2, with Middleton and Freeman voting no.

The passionate discussion took place immediately after a heated public commenting session where almost 50 people addressed the council about the city’s proposed budget.

Noting that a large number of people wanted to speak, Schewel limited comments to those who pre-registered, giving each one minute. That angered several community members who criticized the council during their remarks. Others voiced their complaints in a virtual chatroom.

Of those able to make comments, 35 spoke against the budget, demanding that the city council defund the city’s police department. That is something included in an alternative budget proposed by Durham Beyond Policing, a coalition of local activist groups.

Some speakers expressed outrage that council members were considering any increase in police funding at a time people are protesting across the county against police violence directed at Black people.

“How dare you — at a time like this — give $70 million, a 5% increase, to cops when cities are burning in rage and mourning across the country,” said Erin Carson, a member of the city’s Human Relations Commission. “Our city workers’ wages and our vital programs are frozen, but the police never miss a cent while delivering nothing.”

Others emphasized what they felt was the community’s desire to have police funding redistributed to other services. “To say defund the police, we’re just saying give the people back our money, and that’s what we’re asking for now,” said Mabelle Segrest, a resident.

Four people spoke in favor of passing the budget as it was drafted. Sheila Huggins, who represented Friends of Durham, a moderate political action group focused on public safety, asked council members to commit to working with residents on a “comprehensive plan for community policing”.

Middleton stressed that approving the budget did not preclude advancing police reforms.

“This budget is increasing the police budget, full stop. It’s not buying tanks, it’s not buying tear gas, it’s not hiring more officers to be on the street. But it is going up,” said Middleton. “Because inflation happens. Things happen.”

This year’s budget, rewritten after considerable revenue losses during the coronavirus pandemic, canceled raises for city employees. Reece explained that he supported the budget because he says it avoids further layoffs, preserves essential city services, and safeguards city finances in case revenues continue to decrease.

Reece noted that the thousands of emails he received asking to transform public safety and policing was the most he had ever gotten for any city council matter. Still, he said he felt more dialogue and understanding were needed. “There are lots of folks in Durham who have a hard time imagining a Durham beyond policing,” he said.

With the budget issues seemingly settled, the city council meeting moved onto seemingly less contentious topics such as community development grants. But a public hearing on that matter provided another opportunity for comment from audience members.

“You don’t have the moral courage to take a very small step toward addressing the centuries-old damage that’s been done to our community at the hands of government,” said Donald Hughes, who had earlier spoken in favor of the Durham Renewal Project, a budget proposal by activist group Other America Movement Durham calling for more spending on community services.

At top: Members of the Other America Movement have set up camp in front of the city police headquarters downtown. Photo by Henry Haggart

Published in Local government and Uncategorized