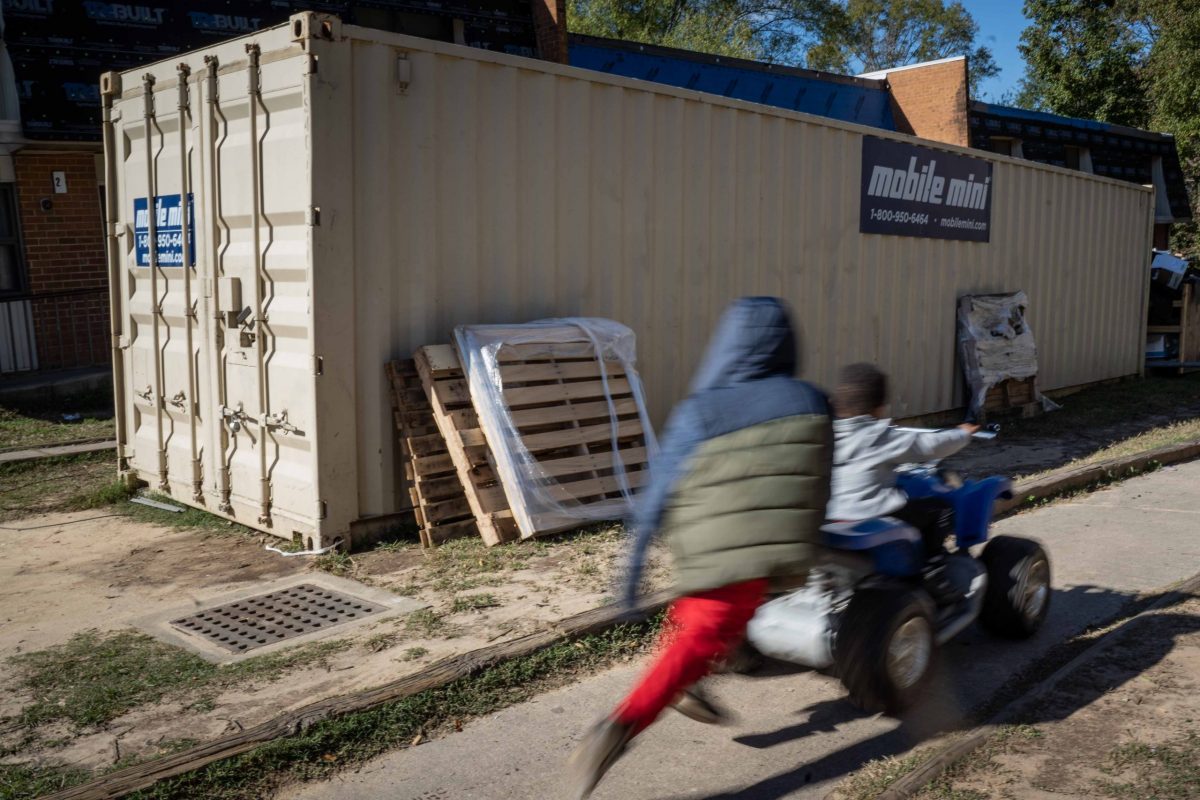 Residents at Hoover Road public housing knew much-needed repairs to their roofs would begin in June.

But they didn’t expect the project, not yet finished, would bring rats to the space where children play near their front porches.

Since July, Hoover Road residents have been grappling with an outdoor rodent infestation under a storage trailer and a makeshift dumpster. The containers, full of materials and bags of waste from the renovations, were placed in the middle of a grassy corridor between two apartment buildings where multiple families with young children live.

Community activists and residents want Durham Housing Authority, which runs Hoover Road and other public housing complexes, to fix this problem. They want the trailer and a growing rodent colony underneath removed.

In a brief phone conversation Friday morning within earshot of a 9th Street reporter, Emanuel Foster, DHA’s director of housing operations, reassured community organizer Ajax Woolley that the agency was aware of the problem. He said the roofing contractor would be moving the trailer, which workers were still opening and taking materials out of on Friday, and the agency would retain another company to fill in the rodent burrows.

When pressed on if it would happen soon, Foster wouldn’t say. “I can’t give a timeline,” he said.

He promised to update Woolley, part of a team of activists working on housing issues at Durham Congregations, Associations and Neighborhoods, a community group, by noon Friday. Woolley at 5 p.m. said that he has not yet heard back from Foster and that he plans to raise the matter with the joint city-county Environmental Affairs Board and City Council members.

Some Hoover Road residents say their complaints have long been brushed aside.

Shaneeka Marrow, who has lived at Hoover Road since 2015, said that maintenance workers first alerted Cheryle Roberts, a long-time DHA employee who is property manager for multiple complexes including Hoover Road, to the rodent infestation in mid-July.

Marrow, whose front porch is a few feet from the trailer, said DHA employees told her in July that they would handle the situation when they could.

“They’re not doing their job,” Marrow said. She described a host of long-standing complaints, including black mold in bathrooms, possible lead exposure, insects in her home, and a screen door that has been falling off its hinges for three years.

Multiple calls and emails to Durham Housing Authority and its CEO, Anthony Scott, went unanswered on Friday. A prerecorded message informed callers to the Hoover Road property manager’s office that only emergency maintenance requests would be considered at this time. The voicemail inbox was full.

Hoover Road is one of Durham’s oldest public housing complexes, built in 1968. After hundreds of people living at McDougald Terrace, another DHA property, were evacuated last year due to unsafe conditions there, city officials blamed inadequate federal funding.

But housing authorities elsewhere in North Carolina manage to keep their properties in better shape than Durham does in the same tough funding environment.

In 2019, Hoover Road was the only DHA complex to score lower than McDougald Terrace in the annual HUD public housing inspection. This year, Hoover Road was rated 60 out of 100, the lowest passing score.

Marrow said she would like to allow her four children living with her at Hoover Road, ages 5 to 15, to play outside more often. But she’s worried for their safety. “I’m not letting them anywhere near the rats,” she said.

Sasha Pass, Marrow’s next-door neighbor, said some residents have largely given up voicing concerns. “A lot of us speak up, and it feels like we’re wasting our breath,” said Pass, who lives with seven children, ages 1 to 11. “Why do I say anything when nobody does anything?”

Pass said Scott, the DHA CEO, visited her apartment last year and she showed him mold and other problems, which she said have not been fixed.

Pass said the problems families and children face in public housing are far greater than rats or even deteriorating homes. She said the threat of violence from outsiders who gather at Hoover Road to sell drugs, as well as a lack of safe outdoor activities, create an environment where she feels she has to forbid her kids from playing outside at all.

“What are they gonna do?” she said, gesturing at a tiny playground at the end of the path. “It’s hard to accept that this is where you and your kids have got to be for a while until things get better,” she added, cradling her youngest son as her children ran across the patchy grass.

At top: Children who live at in the Hoover Road community play near a storage container sitting outside apartments. Photo by Henry Haggart

Correction: This article was corrected to note that Sasha Pass lives with seven children, ages 1 to 11.