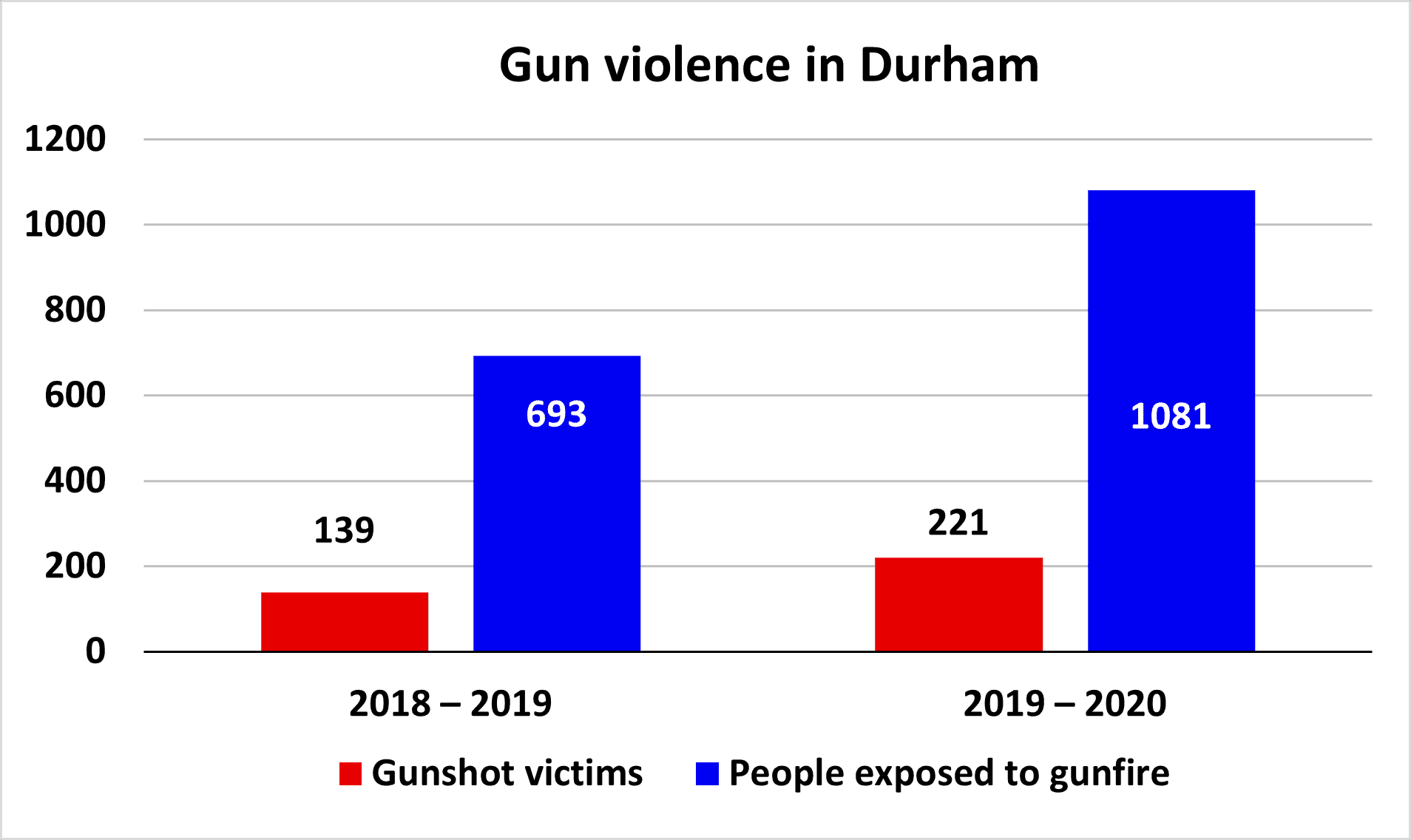 Kenneccia Woolard was in her North Carolina Central University dorm room when she heard gunshots outside. Just as she was about to look out the window, a stray bullet shattered the glass and sent splinters flying.

“I was just inches away of losing my life,” the visibly shaken student told City Council members on Oct. 8.

“I believe that we need an action plan immediately, because our campus is not safe from the residents and criminals that are surrounding our community,” Woolard said after describing the September incident. “I am facing this trauma each and every day, the anxiety, the fear.”

Woolard is one of a growing number of people demanding that Durham leaders take action to reduce rising gun violence, which has soared here over the last twelve months. As cities across the nation confront a rise in violent crime this year, Durham is facing a surge that is a stark reversal of a downward trend since 2017.

Stories of tragedies involving students, children, and elders are emerging from communities most vulnerable to daily gunfire, which residents say makes them afraid to go outside or sleep at night.

At the same virtual meeting where Woolard made her plea, NCCU Chancellor Johnson Akinleye emphasized the need for city leaders to act to reduce the dangers posed by gunfire. “Doing nothing at all is not an option,” Akinleye said.

City Council members agree a response is urgently needed. But they haven’t reached consensus on what to do, in part due to long-standing disagreements over policing.

Data makes clear that gun violence is surging in Durham.

From Oct. 1, 2019 to Sept. 30, 2020, 1,081 people were reported as victims of shootings. Police define victims as people close enough to be hit by a bullet, including people in rooms that bullets fly through. That figure is up 56% from 693 victims in the previous twelve month period.

The number of people shot in Durham has also soared 59% during the past twelve months to 221 people. One out of every six gunshot victims in Durham during that time was younger than under 18, including eight children under 12.

Many of these conflicts are motivated by gang activity and are fought with weapons reported as stolen from legal gun owners, Davis said.

The pandemic is also playing a role. Jails are releasing inmates to reduce coronavirus exposure risks, children are at home rather than attending school in person, and some community programs that diverted teens from joining gangs have been paused, Davis said.

“This is just an environment that has allowed for various gangs in the city to wreak havoc,” Davis said.

Numbers don’t come close to conveying the scope of this problem, which disproportionately harms Black families and children, said City Council member Mark-Anthony Middleton. He has made it a personal mission to try to reduce daily gun violence.

“We saw a major stakeholder in our city come forward saying, essentially, that this is a state of emergency,” Middleton said, referring to the statements from NCCU students and administrators.

Middleton supports five recommendations that Chancellor Akinleye presented to the City Council on Oct. 8. Fellow council members DeDreana Freeman and Pierce Freelon also voiced support for all of the initiatives during the meeting.

Mayor Pro Tem Jillian Johnson said she supported Akinleye’s request that NCCU police be allowed to patrol neighborhoods surrounding their East Durham campus. She said she wanted city staff to research and prepare a report on the other four recommendations.

Akinleye also urged the city to increase its own police patrols nearby and install speed bumps around campus, which is near neighborhoods the city has identified as hard-hit by violent crime.

The city should accept a six-month trial of ShotSpotter, an automated service that alerts police when shots are fired, something that residents who hear shots so often don’t always do, he said. Akinleye also pushed for the city to appoint an NCCU administrator to serve on the city’s new public safety task force.

The City Council rejected ShotSpotter in 2019 and again in September. Council members Javiera Caballero, Charlie Reece, Freelon, and Johnson cited the unclear evidence for its effectiveness and the $195,000 the city would need to pay each year.

They also said they were reluctant to embrace a tool they felt would lead the city to continue depending too much on police to solve problems.

Middleton, a longtime backer of trying ShotSpotter, reiterated during an interview last week that the six-month trial would at least give the city valuable data for free. He also rejected the idea that ShotSpotter would lead to over-policing of already-vulnerable neighborhoods.

“We know that unreported gun violence is a problem,” he said. Refusing to invest in tools to measure the extent of that problem, he said, was “morally indefensible.”

For Mayor Pro Tem Johnson, solving the problem of gun violence means tackling deeper “root causes” in the community, rather than reflexively expanding the police.

“There will be less violence in Durham if people can stay in their homes and not be evicted, if people can find jobs that are safe,” she said during an interview the day before the Oct. 8 meeting. “It’s not a lack of policing that causes our economic and social disruption.”

Johnson said she feared that continued job losses linked to economic disruption from the pandemic, a coming wave of evictions, and other problems caused by the pandemic will fuel an increase in crimes, like selling street drugs, that often turn violent.

The city set aside $5 million for its COVID relief fund and poured another $1 million into Durham County’s housing and rent relief program. But Durham doesn’t have the scale of resources to offset residents’ financial distress, she said.

“What we really need, number one, is more federal support,” Johnson said. “We’ve been watching very closely the situation with the federal relief bills.”

“Those conversations need to continue,” she said.

The police department is working to reduce the surge in gun violence by focusing on the gang members who are committing most of the shootings, Chief Davis said.

Officers are being trained to identify shooters linked to gangs, she said, adding that she wants her department to focus on tracking and stopping repeat offenders rather than “casting a wide net on communities.”

A serious challenge is the widespread availability of stolen guns used during violent conflicts, said Davis. She estimated that 40% of the guns recovered by her department were reported as stolen.

The department is trying to educate gun owners on ways to store their weapons more securely, hoping to stem the flow of illegal firearms onto the streets.

Davis said she agrees that gun violence is a problem that requires more than a police response. Many of the people involved in violent conflicts are teenagers between 15 and 17, she said.

“There have to be other entities involved in helping to redirect our young people’s activities on a daily basis,” said Davis. She noted that officers are working on building relationships with residents by being more visible in communities, including by attending neighborhood events.

Programs in the works

City staff are also analyzing 911 calls to identify tasks like responding to mental health crises that could be redirected to other city departments, freeing up police resources to address violent crime, Johnson said.

“The police department has a very specific mandate from council to focus their resources on violent crime,” she said.

The city is still working with the county and school board to launch the Community Safety and Wellness Task Force, a group of residents and researchers tasked with recommending alternatives to policing, which Johnson has said will be more successful at reducing violence compared to “reactive” tools like ShotSpotter.

“If we don’t deal with root cause issues, the need for police will actually increase,” she said.

But for Middleton, too much is at stake to not act more aggressively now while discussions about long-term interventions continue.

“Every time somebody says root causes, I want somebody to point to our budget and say here’s a root-cause initiative, and here’s the amount of time it’s going to take for gun violence to come down in our city,” he said.

At top: Data shows a surge in overall shootings as well as gunshots between Oct. 2019 and Sept. 2020. Shooting victims increased by 56% to 1,081 people. The number of people shot increased even more by 59%, reaching 221 gunshot victims. Data provided by the Durham Police Department. Graphic by Charlie Zong