Home » A tale of two cities: Lessons for Durham about ShotSpotter 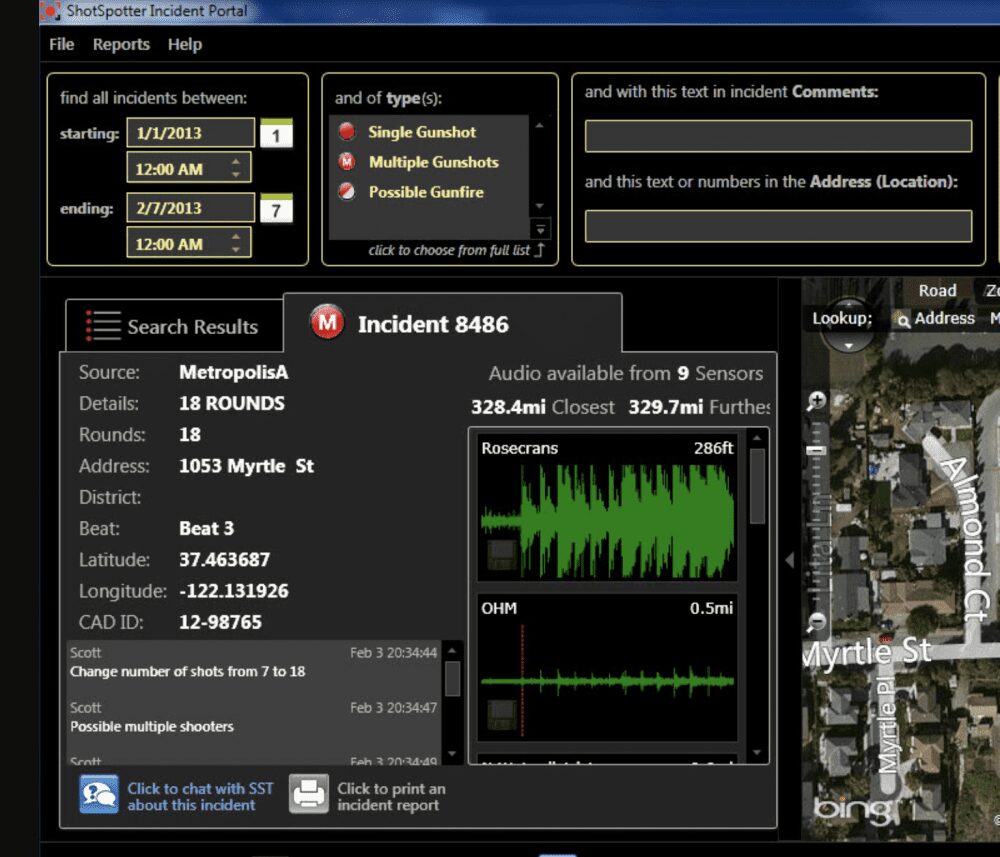 A tale of two cities: Lessons for Durham about ShotSpotter

A gunshot goes off.

In many neighborhoods, no one calls the police.

But in more than 100 cities, the sound is picked up by audio sensors, and computers quickly triangulate the location of the sound.

Meanwhile, in a room in California, audio experts sit behind several large monitors that are filled with red and green maps. They monitor the alerts from the sensors and, if they determine the sound was indeed gunfire, they quickly alert the local police.

The whole process takes approximately 60 seconds, according to ShotSpotter, the company that sells the technology. That enables officers to respond quickly and – city officials hope – reduce the likelihood of injuries and further shootings.

In June, the Durham City Council voted down a measure to implement ShotSpotter, citing insufficient data about the service and other budgetary priorities. But after a spate of recent shootings, Council Member Mark Anthony Middleton is urging them to reconsider.

“Kids in Durham are being trained to jump in the bathtub when they hear gunfire,” he said. “They’re getting soldiering skills at eight or nine years old.”

As Durham deliberates, Middleton and others can learn from the experiences of two North Carolina cities with very different experiences with ShotSpotter. In Charlotte, officials decided ShotSpotter wasn’t worth the money. But, in Wilmington, officials like the system so much they want to expand it.

In 2012, Charlotte had high hopes for ShotSpotter.

The city was about to host the Democratic National Convention and wanted to be prepared for potential gun violence.

Patrick Cannon, then the mayor pro tem, told the City Council that ShotSpotter was a smart investment.

“I know we don’t like talking about guns … but having a system for the long-term is something I believe is really important to this community,” he said.

At the time, the Charlotte-Mecklenburg Police Department bought a contract covering two square miles in the center of downtown, only a fraction of the department’s 473-square mile jurisdiction. Cannon said the technology might make the city safer because of its ability to alert police officers in real-time.

But ShotSpotter didn’t live up to its promise. In 2016, the City decided to abandon its $160,000 contract with ShotSpotter.

“The premise of the technology is to be alerted to gunfire in the absence of someone calling 911,” she said. “But, in our city, we’ve found that primarily citizens call 911. We are already on route to it, just about as soon as we get the information from ShotSpotter.”

ShotSpotter wasn’t worth the investment, said Cody. The city canceled the contract.

Wilmington has had a much better experience. After using ShotSpotter for nearly nine years, the city recently signed a contract to expand services with the company.

In Wilmington, ShotSpotter covers a six-mile radius. Officials used data to determine neighborhoods that had high incidents of gun violence, which decided the locations of the sensors.

Deputy Police Chief Alejandra Sotelo said she’s pleased with the technology because it speeds up the process of dispatching police officers.

When people call the police, it slows the process. A ShotSpotter alert can often be faster than a 911 call, which needs to go through a dispatcher  Even a one- or two-minute delay can mean life or death for victims of violent crime, Sotelo said.

It’s so good, Sotelo said, that some people might trust the system a little too much.

“One of the things we have noticed since we’ve implemented this technology is that people often don’t call 911, which is concerning. They think ShotSpotter will just pick it up,” she said.

Wilmington has seen a reduction in crime in the last few years. “Our overall violent crime numbers have gone down, and this year we’re proud of a record low,” said Sotelo. She thinks this might be correlated with the implementation of ShotSpotter.

Sotelo said ShotSpotter doesn’t need to generate arrests in order to be effective.

“We use it as a tool to get to the scene and gather evidence quicker. You still have to go through the investigative process” to make arrests, Sotelo said.

The Wilmington Police Department liked ShotSpotter so much the city has expanded its use. As of this month, it was the first in the nation to complete training for the ShotSpotter Missions tool, a data analytics program that forecasts crime and preemptively dispatches police.

Sotelo said she would like to see a system of cameras integrated with ShotSpotter. Video footage would help identify victims and suspects, something the current tool does not do.

As for Durham, Sotelo recommends the city do its research. “I could tell you how great it is, and I do think it’s a great, but make sure you go to other cities. Come to Wilmington, see how it works and what officers think about it.”