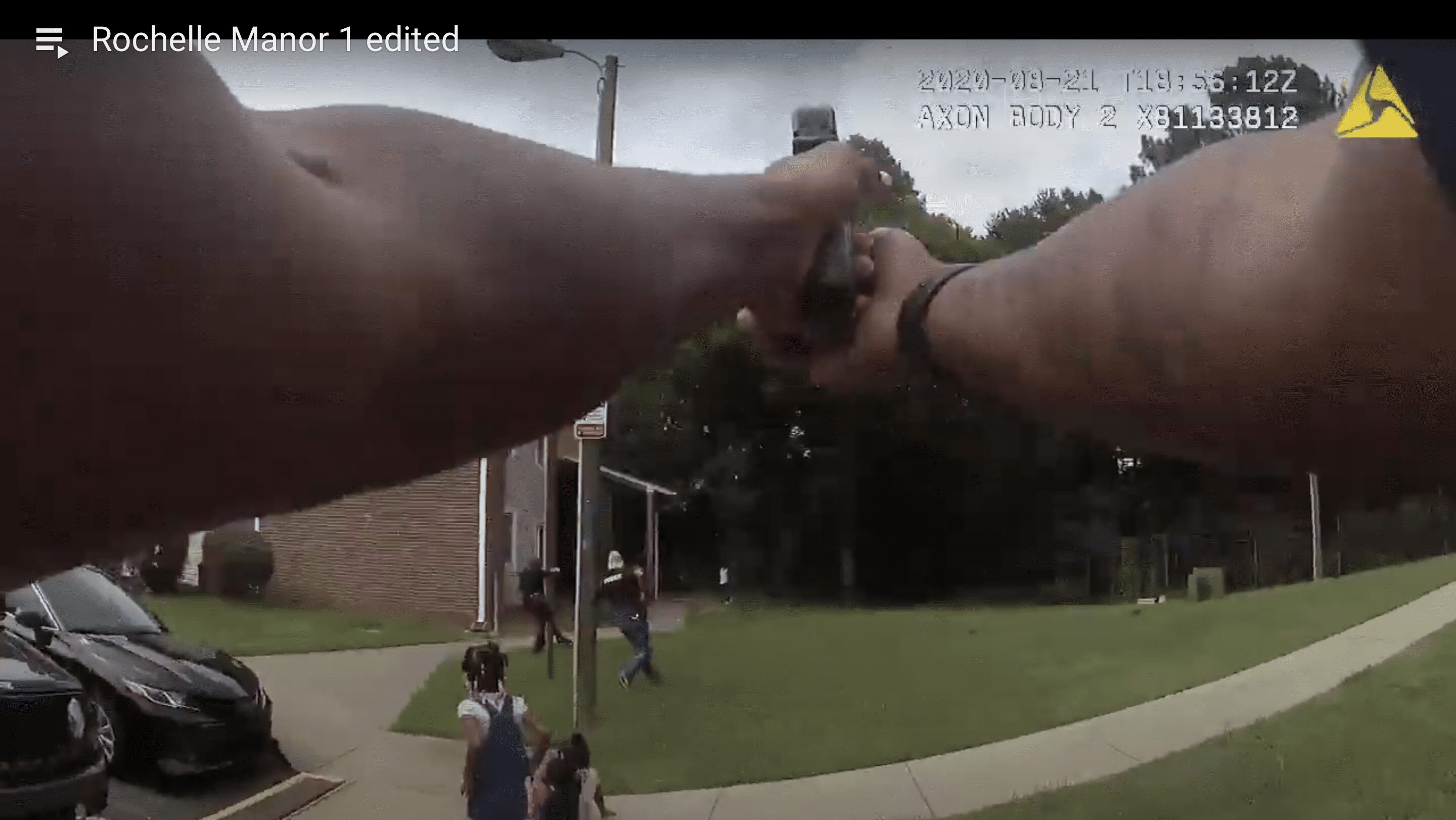 As Durham faces a surge in gun violence this year, it’s not just shootings that can pose risks to residents.

Police videos released this week show how terrifying it can be for children and parents when officers rush into a neighborhood looking for someone they believe is armed and dangerous.

Teenager Jaylin Harris and two young friends were playing tag on the lawn at Rochelle Manor apartments on Aug. 21 when Durham police arrived. Officers were responding to a 911 call that reported a Black man in a white tank top who was armed and selling drugs out of an SUV parked near where the children were playing.

The videos, recorded by officers’ body cameras and a Rochelle Manor security camera, show Jaylin, the 15-year-old, watching from a rear corner of a building as officers scouted the building and the parking lot.

After an officer saw him, the teen went behind the building toward the other side. At least four officers drew handguns and ran after him as residents and children nearby screamed.

Jaylin’s playmates, 8-year-old Zakarryya Cornelius and an 11-year-old boy, cowered on stairs next to him as officers ordered Jaylin to the ground. One officer briefly pointed his gun toward one of the younger boys before recognizing that he was a kid. The officer then cuffed Jaylin’s wrists behind his back and yanked at his tank top and shorts to frisk the teen.

As adults rushed to the scene, officers ordered them to keep a distance. Makeba Hoffler, Zakarryya Cornelius’s mother, arrived frantic and nearly hyperventilating. She begged an officer to let her get her boy. Once she beckoned her son and the 11-year-old boy over from the stairs, she tried to help Jaylin.

“He’s a baby. He’s a child, he just turned 15,” an anguished Hoffler said, pointing to Jaylin. “Please take them cuffs off him!”

“Well we’ve got to figure out what’s going on,” an officer replied.

Officers uncuffed Jaylin after about 2 minutes and 30 seconds. They told the teen to sit on the sidewalk. Before letting him go, one officer told Jaylin that he should not run from the police.

Superior Court Judge Josephine Kerr Davis ruled in September that City Council members could see the body camera footage. But the city could not release it to the public until after the Durham Police Department finished an internal investigation, Mayor Steve Schewel said. The investigation was completed last week.

After the investigation, Police Chief Cerelyn Davis disciplined two of the seven officers involved in the incident, including a one-day suspension of Officer Zack Starritt, according to City Attorney Kim Rehberg.

Release of the footage was long overdue, said Hoffler. She said she requested that the videos be made public within days of the incident, when the mothers of the children involved met with Chief Davis.

“We should have had it by that Monday. They just stalled a lot,” Hoffler said, referring to the police department. “They didn’t want it released because we were in the right, and they were wrong.”

Meier stressed that he didn’t believe anybody involved had acted inappropriately. “The officers did nothing wrong here but the kid didn’t either,” he said, referring to Jaylin, the teen. “He just got caught up in an unfortunate situation and, I mean, this is what policing is.”

But Schewel said he thought that a 15-year-old handcuffed for even two minutes and 30 seconds was restrained for too long in that situation. “I think that he should have been immediately uncuffed,” the mayor said.

Although Schewel said he couldn’t speak to the exact reasoning behind Chief Davis’ decision to discipline the officers, he made clear that he supported her response.

“Clearly, the officers made a mistake in identification. And it was a mistake that I’m sure has very adverse consequences for this young man, and for the other children who were there watching and their families,” said Schewel.

Surveillance cameras showed two small boys who immediately raced up the stairs on the other side of the building to get indoors. But other young children clung to parents and watched from a distance while Jaylin was handcuffed on the ground.

The fact that residents and police officers don’t know each other is repeated again and again during the videos. Officers and parents made clear they feel that’s a serious problem, but for different reasons.

After Jaylin was released, Ashley Harris, his exasperated mother, told an officer that Jaylin was a child. Police should not have pointed guns at him no matter what, she said.

“I understand you’re upset — Ma’am, we’re responding to a 911 call, a person with a gun,” the officer said, explaining that the police had no way of knowing Jaylin was just a child.

“When officers come out here, and they respond to a threat — somebody out here called, alright? We don’t know nobody out here. We don’t know if he’s 15 or 25,” said the officer, who asked Harris if she wanted him to call Jaylin the following week.

“No, I want y’all to stay away from my kids,” Harris said.

Months later, the mothers are still trying to help their children cope with the incident.

“How can I tell my kids to trust you when the last thing they remember was you holding a gun to them?” Hoffler, the mother of Zakarryya Cornelius, who turned 9 the day after the incident, said during an interview this week.

“We still got to be careful calling the cops to our own house because they’re so gun happy,” she added. “Now we have to protect our kids from the people who’re supposed to be protecting us.”

Hoffler said officers needed to get to know the community so they would be familiar with kids who are usually outside playing, rather than treating them as suspects. An increasing number of teens aged 15 to 17 are participating in gang-related shootings in Durham, Chief Davis revealed in a recent interview.

“If they came around and got to know these kids, they’d have a whole different perspective with how they approach our community,” Hoffler said. “They would have known it’s the same boys out here every single day doing the same thing.”

Hoffler said she hoped the release of the footage would lead to more accountability for the officers involved.

“I hope they review this case again and take more action against these officers, take them off the streets for a little bit,” she said. “What if it happens to someone else’s kid and they aren’t as lucky as our kids were? Is that what it’s going to take?”

“One day, that’s a little vacation for him,” she said, referring to the 8-hour suspension handed to Zack Starritt, one of the officers at the scene.

9th Street Journal reporters Charlie Zong and Cameron Oglesby can be reached at charlie.zong@duke.edu and cameron.oglesby@duke.edu.

At top: Recordings from body cameras and surveillance video capture police handcuffing a teenager at Rochelle Manor. The footage from August shows Durham police responding to a 911 report that an armed man was seen at the apartment complex. Mothers say police were wrong to point guns towards kids and handcuff a teenager. City officials released the video this week after police investigated the officers’ behavior and disciplined two officers. Video edited by Cameron Oglesby.