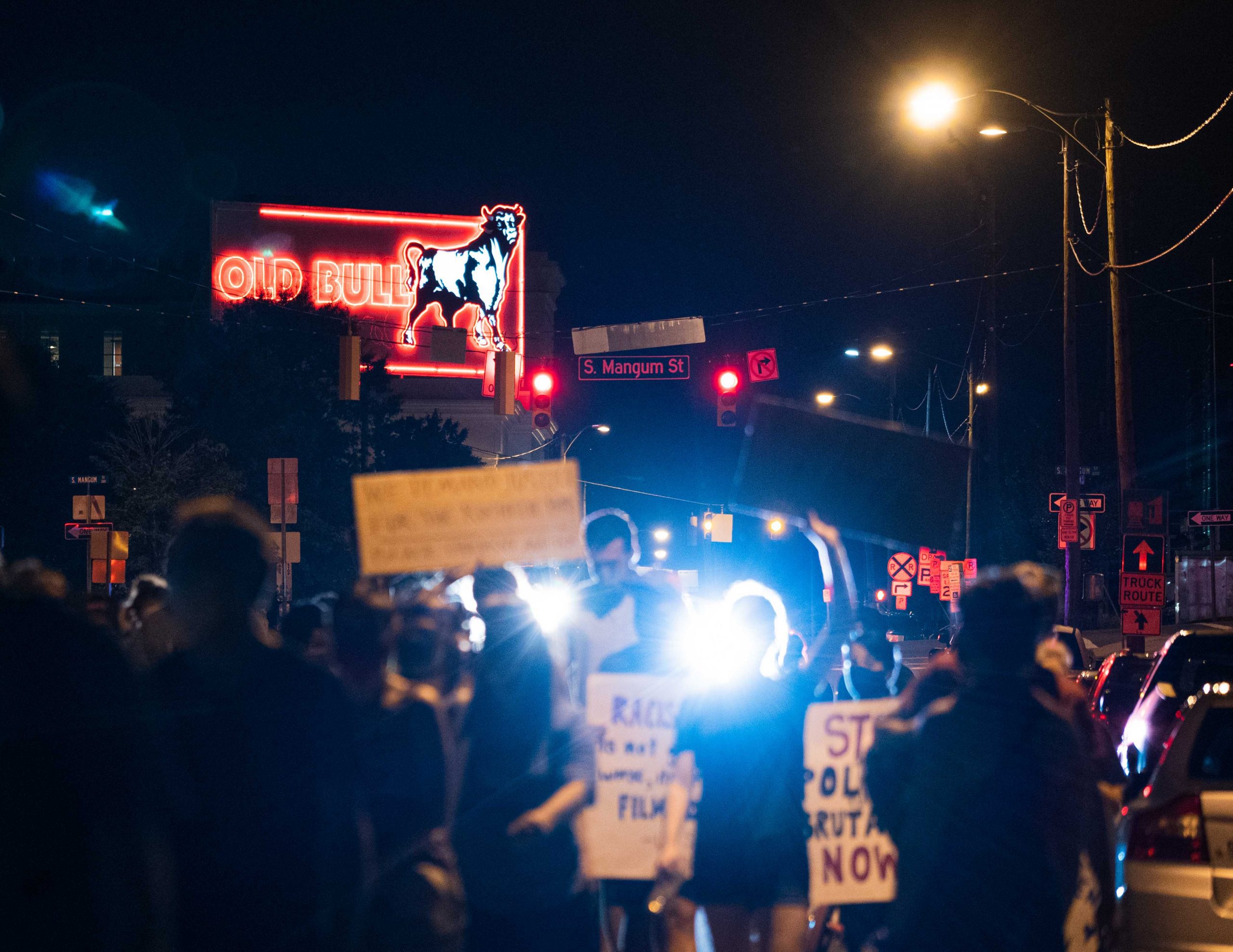 A summer of change was just beginning when Durham’s elected leaders vowed on June 15 to “transform policing” in response to local and national protests against systemic racism and police brutality — matters long debated in Durham.

Among other promises, Mayor Steve Schewel and council members pledged to review and reform the police department’s rules on police use of force in the next 90 days.

With that deadline approaching, the mayor and Police Chief Cerelyn Davis are preparing to release a presentation concerning the department’s rules on police use of force, said David Anthony, executive officer to the police chief.

The mayor’s office and police department have not specified a release date or whether the presentation will be the city’s final response to the 90-day pledge.

“Force” in this context means physical tactics police can use against people who don’t comply with lawful orders as spelled out in department policies. The department updated those policies in June, but activists and some city council members say some rules are still not clear enough.

The reform campaign 8 Can’t Wait, a project by Campaign Zero, a national group that promotes what they say are evidence-based reforms, won the support of some Durham officials, activists and residents.

Launched June 3, the campaign urges police departments across the nation to adopt eight policies intended to restrict the use of force. They include banning chokeholds, requiring officers to exhaust all means before using deadly options like firearms, and requiring police to intervene if they witness another officer using excessive force.

Durham police department spokesperson Amanda Fitzpatrick said in an email that the department’s rules “are currently aligned with the recommendations.”

But an analysis by The 9th Street Journal of Durham’s manual of rules for officers — which was updated on June 10 — found that DPD written policies meet only six of the eight recommendations explicitly.

Years in the making

Efforts to reform how police interact with residents began long before this summer.

In 2013, a 17-year-old named Jesus Huerta committed suicide in the back of a Durham police cruiser. Investigators determined Huerta shot himself with a gun hidden on him at the time of his arrest, and officer Samuel Duncan was suspended without pay for violating search protocols and failing to switch on the cruiser’s video and audio recording devices.

Though the Huerta family ultimately accepted the findings, police donned riot gear and released tear gas at a vigil for Huerta. The controversy intensified pressure on the city to reform its police department.

From 2013 to 2019, 203 people were killed by police in North Carolina, according to the Mapping Police Violence research project. Black people were 38% of those killed, though they make up only 21% of the state’s population.

Durham, where police killed 5 Black people and 1 white person between 2013 and 2019, had the largest racial disparity between rates of Black and white civilians killed by police among major cities in the state, the research project found. Officers were not charged in any of the cases, as tracked by Mapping Police Violence.

In 2015, the city commissioned a study by the International Association of Chiefs of Police that found the Durham police department faced “deteriorating relationships” with the community and a “lack of public trust” in part from perceptions of racism and discriminatory practices.

In 2016, the city hired police chief Cerelyn Davis, who vowed to build a “culture of trust” between police and the community.

They include requiring police to obtain written consent before vehicle searches, de-emphasizing marijuana violations, and monitoring data on traffic stops for racial disparities. Davis has been a “change agent” who led “a definite shift in the culture of our police department,” Middleton said.

But recent controversies over a police officer being accused of assault of a high school student and officers drawing weapons on three youngsters have renewed demands for an end to police violence.

The 8 Can’t Wait recommendations are based on Campaign Zero’s 2016 analysis of civilian deaths involving officers and restrictions on the use of force at 91 of the 100 largest police departments in the country, including Durham.

The group’s analysis says the typical department uses only three of the eight deadly force reduction practices intended to help prevent officers from harming or killing civilians. According to the group, in 2015 Durham had only two of eight policies on the books explicitly.

“Harm reduction is important and you can’t enforce what isn’t against the rules,” said Samuel Sinyangwe, a co-founder of 8 Can’t Wait.

Cities across the country, including Raleigh and Durham, have moved to reform their policies in line with 8 Can’t Wait’s recommendations.

Durham officers are encouraged — but not required — to exhaust all possible alternatives before resorting to deadly force, the manual states.

Officers are required to file a use-of-force report only if physical force or injury occurs. The 8 Can’t Wait recommendations say reports should be filed every time violence is threatened, including when officers point guns at people.

Fitzpatrick told The 9th Street Journal that the manual is being updated “to explicitly state officers have a duty to intervene to prevent or stop excessive force if witnessed.”

The manual states officers are not trained in the use of chokeholds. Nor are they listed among authorized force options, which escalate from hand techniques and pepper spray up to firearms. But the manual does not explicitly say chokeholds are prohibited, either.

In an interview, Mayor pro tem Jiillian Johnson said that ambiguity in the policy is a problem.

Johnson early this year criticized Durham as “one of the poorest performing cities” when it comes to having a clear and explicit use-of-force policy, citing the absence of an explicit ban on chokeholds and the department permitting officers to use deadly force before exhausting other options if the officer deems it “objectively reasonable,” according to the manual.

“When you give the officer discretion to determine whether it’s reasonable … That’s my main point of contention with the interpretation that we meet these guidelines,” Johnson said. “Those hedges make it so that we don’t actually meet the guidelines as they’re written.”

She and a co-author called for “significant improvements” in a January op-ed in USA Today that recently retired city manager Tom Bonfield and council member Mark-Anthony Middleton strongly rebuked.

Middleton said he did not agree that police use-of-force rules were only effective if they closely followed the wording in standards created by 8 Can’t Wait or other groups.

“It’s not true that our department is woefully lacking in use-of-force standards,” he said.

Debate over police reform to continue

While 8 Can’t Wait has gained traction among local governments being pressured to take action, not all local activists agree its agenda is enough.

Some say cities, Durham included, should “defund” or abolish their police departments and focus instead on community wellness and crime prevention. Andréa Hudson, director of the North Carolina Community Bail Fund, said she considers the emphasis on 8 Can’t Wait a distraction from defunding the police and spending more money on community health and safety initiatives.

“A system that has white supremacy embedded in it will not change just because you banned them from doing things that they shouldn’t have been doing in the first place,” said Hudson.

But city council members remain focused on achieving what they say is sustainable, long-term change. The city council in June unanimously passed the city’s $502 million 2020-21 budget, which included $70 million for the police, despite a vocal campaign from local activists.

In a June op-ed in Spectacular Magazine, council member Middleton pointed to the city council’s 2019 decision to reject hiring 18 officers — only to hire 6 officers several months later in response to gang violence — as evidence that the city needs to first develop viable alternatives to the police.

Also in June, council members committed $1 million to form a Community Safety and Wellness Task Force, a resident-led group that will recommend alternatives to traditional policing.

As the city wraps up its 90-day pledge to review police use-of-force rules, Johnson said she wants to see an explicit ban on chokeholds and more comprehensive reporting when police use force. But Johnson’s end goal is deeper.

“These reforms are useful, but they’re not systemic reforms,” Johnson said. “Ultimately, I want to do less policing overall.”

At top: Protesters march through downtown last week in support of the families of three Black kids who police confronted with drawn guns at an apartment complex in August. Photo by Henry Haggart

Published in Public safety and Uncategorized