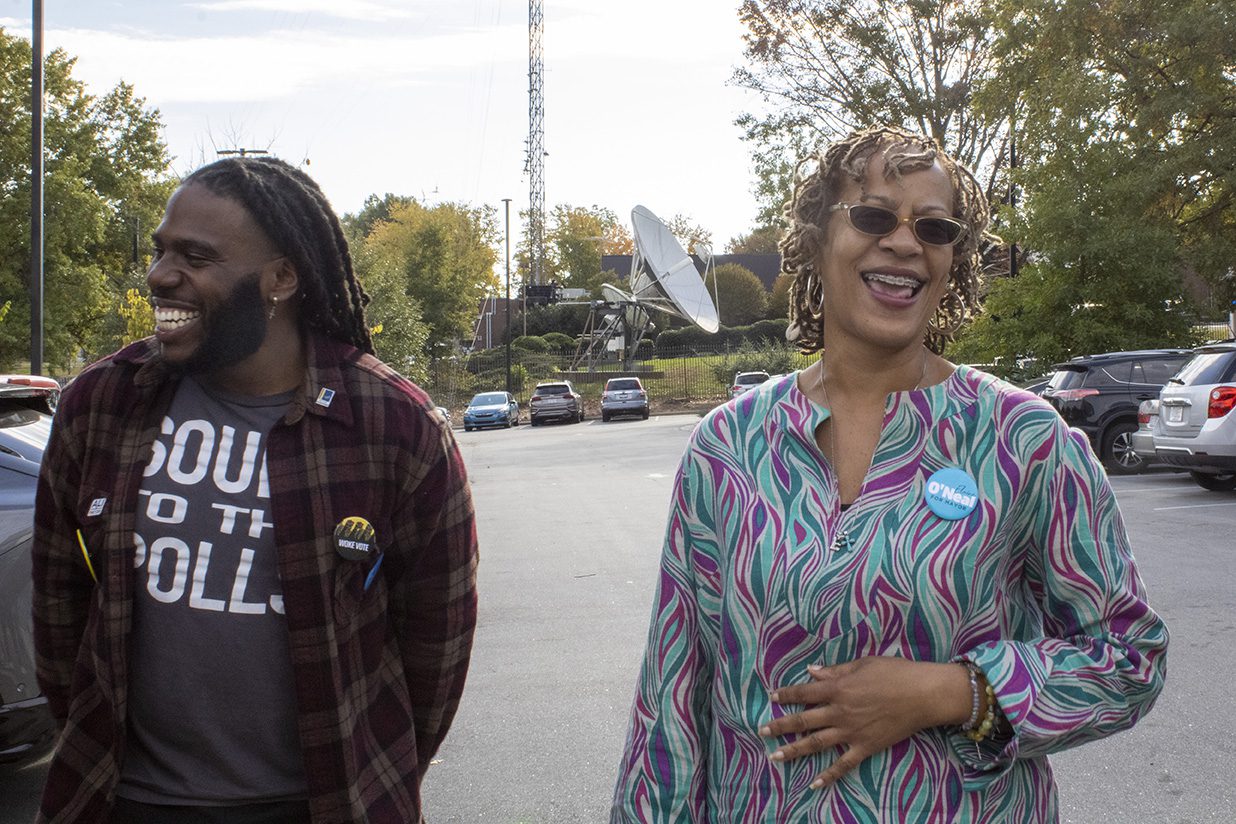 Although the contest started with a big surprise — a top mayoral candidate suspended her campaign just weeks before Election Day — there were very few shocks at the end of last night’s Durham municipal elections.

Elaine O’Neal, Durham’s new mayor elect, was sure to become the first Black woman to serve as the city’s mayor. Last night only made it official.

Former Judge O’Neal received 25,604 votes, or 84.69% of the total. Her challenger, City Council member Javiera Caballero, remained on the ballot after halting her campaign and won 4,385 votes, or 14.50% of the total, Durham County’s unofficial election results site showed late Wednesday.

Turnout is always low in Durham’s municipal elections, but this year was even worse. The number of people who voted appeared to be considerably down. As of Wednesday night, just over 30,000 ballots were counted in the mayoral race. That number could rise modestly as a few mail ballots trickle in, but won’t go up much. In the 2017 and 2019 municipal elections, around 36,000 and 35,000 votes for mayor were cast, respectively.

There was a slow start to voting this election cycle, even in the primaries. Just one in 10 registered voters cast ballots in the Oct. 5 primary, in which candidates running for mayor and two City Council seats competed. The 10.02% turnout rate was in between the turnout rate for Durham’s last two municipal primaries. The primary showed a slight upshift in votes compared with 2019, back when Mayor Steve Schewel was running for re-election and 8.96% of Durham registered voters cast ballots.

This year’s low turnout could have something to do with what was on the ballot. Mayoral candidate Javiera Caballero suspended her campaign, and decisive primary victories told a relatively clear story of who would win Ward I and Ward II.

2. Incumbents dominated in Ward I and Ward II

Unsurprisingly, City Council incumbents Mark-Anthony Middleton and DeDreana Freeman won by large margins. This was expected after decisive primary wins by both candidates.

Freeman won an impressive 71.17% of the vote against the more progressive community organizer Marion T. Johnson. Johnson was no pushover: she received a big endorsement from the People’s Alliance, as well as Mayor Pro Tempore Jillian Johnson. and led a hard-fought campaign that included call canvassing and yard signs across the city.

Still, Freeman’s work on the council, including efforts to fight child poverty and support environmental justice initiatives and small businesses owned by people of color proved robust enough to easily grant her another term.

With incumbents and clear primary wins in the races for mayor, Ward I and Ward II, it was Ward III that truly proved the night’s most suspenseful contest. Community organizer AJ Williams and Zweli’s restaurant owner and educator Leonardo Williams both ran extensive campaigns, splitting key endorsements from throughout the city. Pierce Freelon, who was appointed to the seat in 2020, endorsed AJ Williams earlier this year.

After a tense night, though, Leonardo Williams won by just 635 votes.

His win followed a trend. The somewhat more moderate candidate also won in a Ward I race where both candidates campaigned hard. Same goes for the mayoral race, where Elaine O’Neal won the primary so decisively that her more progressive opponent effectively called it quits.

In the end, the most progressive candidates lost in Durham yesterday, excluding Middleton, and a more moderate Durham won. The People’s Alliance PAC, the most progressive endorsing PAC with significant influence in Durham, endorsed Caballero, Johnson, Middleton, and AJ Williams. The Durham Committee on the Affairs of Black People, a more moderate body, endorsed Elaine O’Neal, Freeman, Middleton and Leonardo Williams.

Every single candidate on DCABP’s endorsement list won their election on Tuesday night. There are many factors at play in why a candidate wins: incumbency, effort in campaigning, positionality on significant issues. Yet, still, the most progressive candidates in Tuesday’s races did not come out on top.