Home » As Durham buildings fall to the wrecking ball, a Facebook community gathers to watch, vent and question

As Durham buildings fall to the wrecking ball, a Facebook community gathers to watch, vent and question 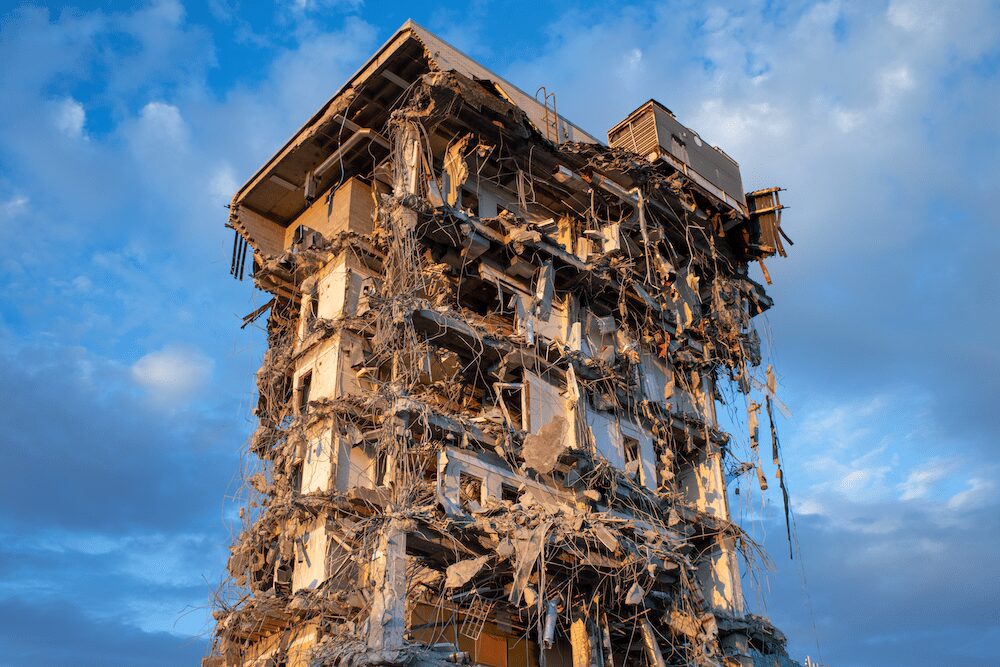 “My block @ Hillsborough and Rutherford has been sold,” the Feb. 21 post says. “Final day to move out March 4th. The buyers are developers. I’m assuming more apartments will go up.…”

The comments came rolling in, mostly sympathetic, some angry and indignant.

Cozart’s is just one of the emotional posts that litter the walls of The Teardowns of Durham, an open Facebook group that focuses on pictures and information relevant to Durham’s changing housing landscape.

This is a place of solidarity: with over 3,500 members and counting, the group includes posts about hundreds of buildings that have been torn down, housing justice activism and new, expensive housing in the area. Though the active member count is much smaller, the Facebook group is a public page for a reason: it’s a place for free information. And with about 50 posts per month in the group, and many more comments on each, there’s much to be informed about.

The Teardowns of Durham is partly just what it sounds like — a Facebook group about buildings that have been or are being torn down. But it has also become a forum where locals discuss how Durham is changing and shifting, where new developments are coming and which buildings they once recognized are coming down.

The active discussion reflects Durham’s housing crisis: in the first three months of 2021, about 2,400 homes were sold in Raleigh and Durham. Of those, more than half were bought either by people from out of state or companies, according to a report from the Triangle Business Journal. According to WRAL, 20% of homes in Durham have been purchased by investors in the fourth quarter of 2021, up from 11% in second quarter 2020.

Durham housing prices and property taxes also have increased, making it harder for newcomers to buy and for residents to stay. Meanwhile, though Durham has made efforts to create rent relief programs, the demand for housing remains high, and housing stocks are low.

The Facebook group began as a way to exchange information among a small group of Durham friends and colleagues. It has now ballooned to include thousands of members, from Duke students to Durhamites who have been here since childhood.

There’s a catharsis that runs through each post about a demolished Durham building — a need to tell someone about the frustration at losing a property. A recent post by David Becker is typical of many.

“Big beautiful place on the corner of Gregson and Club was there yesterday when I drove by. This morning….gone,” Becker writes. Much of the frustration aired on the Facebook group reflects worries about losing Durham’s personality, including historic buildings that are dispersed throughout the city. Durham has 15 historic neighborhoods that are listed as National Register Historic Districts. In addition to the Facebook group, other activists and preservationist groups include Open Durham, Historic Preservation Society of Durham and Preservation Durham.

Frequent poster Chris Jay notes that a homeowner refurbished an old home to make it an “weekend getaway” out in Narrowsburg, New York.

“Imagine if all the old homes in Durham that are getting torn down were revitalized and brought back to life to their original classic design, including decor,” Jay says. “That’s what this woman did!”

“I’m sad we are losing so much of Durham’s history,” the post says. “When someone’s lived here all their life, the changes seem so overwhelming… not always a good thing.”

Some posters on the Facebook group push back, arguing that romanticizing old houses will not make Durham more affordable, and will not stop gentrification.

The posts that consistently get substantial interactions, though? Questions. Many users in the Facebook group wonder what is happening to Durham’s warehouse district, around the corner from Fullsteam Brewery and The Accordion, where commercial buildings are being torn down on Geer Street. Another poster supplies a partial answer, responding that a Washington D.C. developer plans to create two large apartment complexes called GeerHouse.

One user laments the teardown of one home replaced by four modern tiny homes on Pritchard Place, near North Carolina Central University. Another user shares a tip: she heard that a century-old Pentecostal church in West Durham is being sold. Responses flood in. The overtone of the conversation: will the church be torn down?

Concerned Durhamites started the Teardowns of Durham Facebook group in May 2019, when the pace of construction and demolition around Durham was ramping up in neighborhoods including Trinity Park, Braggtown, Watts-Hillandale, Campus Hills and more.

In part, the group fills an information gap. Local journalism has been declining in most places in the country, including in Durham, and there are fewer local news sources to keep Durhamites informed about their changing city.

That is a major reason why Ellen Dagenhart, who previously served as president of the Historic Preservation Society of Durham, joined the Facebook group in September 2019.

“The few remaining reporters just can’t be at every meeting where so much of the sausage is brought up and made,” she said. “There’s an awful lot of mischief happening that is under the radar now. Teardowns is filling a void, a need, for a place where people can share, learn, question, vent.”

Bonita Green was born and raised in Durham. She left Durham for South Florida in 1999, and when she returned in 2012

“I saw all the development in my community and the acres of land that the city bought on the West side of Durham. So I had a fear of being washed out. I was fighting to protect the legacy of this community,” Green said. 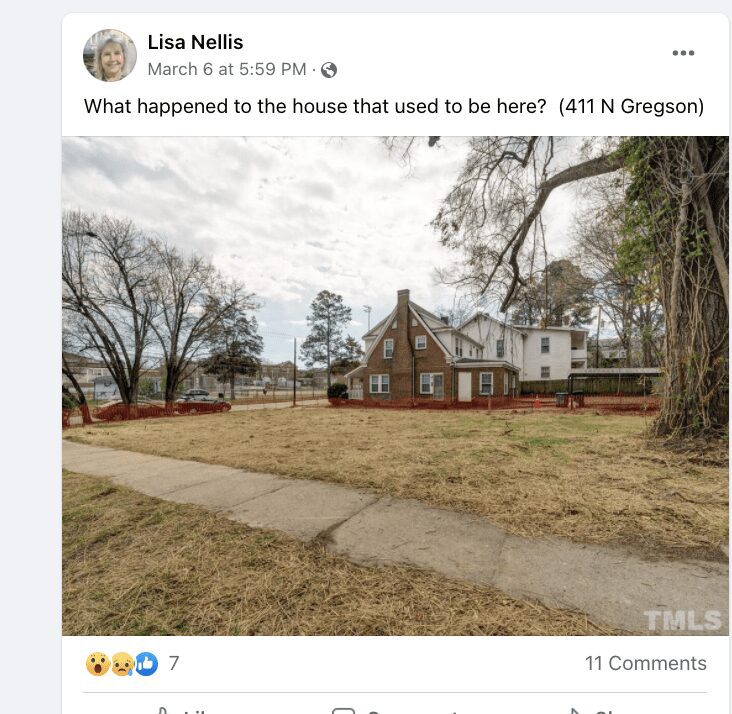 For people like Green, the Facebook group has become more than a place to simply share news and vent. It has also become a site of political organization and mobilization. There are almost as many petitions in the group as pictures of bulldozed buildings.

Urban planner and Durham resident Nate Baker said the petitions and political activism of the group tell a greater story: they reflect many Durhamites’ desire for control over the housing situation in their city. He believes Durham residents are not necessarily resistant to change, as long as they are included in the process.

“I think people have anxiety about the world changing around them and not really having much of a say in the matter,” Baker said. “There hasn’t been robust community engagement and planning processes to alleviate some people’s concerns over teardowns.”

Dagenhart, the member who joined the Facebook group in 2019, said the Facebook group is also a place where residents can talk about their aspirations for what Durham could be. She recalled the joyous ceremony that took place in 2011, when ​​more than 2,000 citizens took vows to “Marry Durham,” promising to protect the city and its reputation and to honor its diversity.

“I think Durham is in need of some marriage counseling,” Dagenhart said.

Above: The South Bank building downtown is among many Durham buildings undergoing demolition to make way for new construction. Photo by Milena Ozernova — The 9th Street Journal