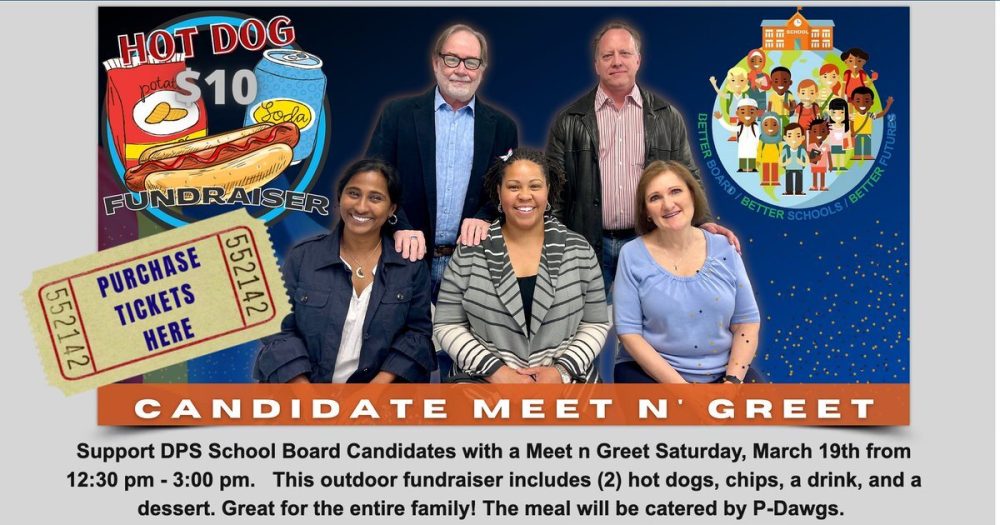 At first glance, a group of candidates in the upcoming Durham Public Schools Board of Education election appears to be pretty typical. On its joint website, the “Better Board, Better Schools” slate mentions a passion for education and the goal of preparing students properly for college or the workforce.

Yet when Durham County resident Bill Busa took a closer look, he noticed some unusual things.

Busa, director of the Democratic campaign data analytics firm EQV Analytics, first saw that the group of five candidates had all filed to run on the same day. They share the same campaign treasurer, Donald Stanger, a precinct chair for the Durham County GOP. Stanger’s home address is listed as the campaign headquarters for each candidate. Each candidate is also a registered Republican.

None of this would be strange, except for the fact that the candidates’ party affiliation is not mentioned in any campaign materials or on their website. Durham school board elections are, in theory, nonpartisan. This means that candidates’ political affiliations are not listed on the ballot.

In Durham, one of the most heavily Democratic counties in the state, Republicans rarely win public office.

Busa believes “they do not want people to know they’re Republicans,” he said in an interview with The 9th Street Journal. “They can only win through the ignorance of the electorate.”

Busa shared his concerns in a recent article posted online, hoping to draw attention to the group ahead of the May 17 election. The article has since been shared widely over email and on local neighborhood listservs.

Unlike other races on the ballot in May, the Durham school board race is not a primary but a final election; the results will decide the composition of the school board.

Members of the “Better Board, Better Schools” group are not breaking any regulations by not listing their party affiliation in their campaign materials. Candidates in nonpartisan races are permitted to reveal and publicize their affiliation if they choose, but are not obligated to do so.

Each of the five candidates listed their affiliation as nonpartisan in their campaign filings.

Busa and others are troubled by the omission. Busa describes the “Better Board, Better Schools” group as “a highly organized campaign… launched and supported by the Durham County GOP, in hopes of slipping a bloc of Republicans under the voters’ radar.”

The 9th Street Journal reached out to all five members of the slate for comment. One candidate, Curtis Hrischuk, responded by email.

“I think this is meant to distract from the fact that the current school board is failing the students and has failed them for years,” Hrischuk wrote in response to the accusations in Busa’s article.

“I certainly wasn’t recruited… Were there a bunch of people who connected us? Yes, but I think that was because we all talked about how bad the situation is and somehow found each other,” he wrote.

Along with Hrischuk, who is running for the District One seat, the “Better Board, Better Schools” slate includes Christopher Burns of District Two, Gayathri Rajaraman of District Three, Valarie Jarvis of District Four and Joetta MacMiller of Consolidated District B.

Some members have leadership positions in the local Republican Party.

The slate also recently held a meet and greet fundraiser at 800 N. Mangum St., the official headquarters for the Durham GOP. Flyers advertising the fundraiser listed the street address, but did not mention that the building is the GOP headquarters.

School board races also don’t draw much attention, McCorkle said. “These are low information races,” he said. “Somebody might just be able to sneak in.”

In an email response, Hrischuk termed those charges “a load of nonsense.” He said he believes human-caused climate change exists, but that there are also other causes of global warming, such as sunspots and volcanic activity.

However, in a pair of Facebook posts from 2011, Hrischuk accuses the “green pseudoscience” industry of manipulating the public for profit. “Man-made global warming is a hoax,” he wrote at the time.

Asked if he believes in creationism, the notion that life was created by divine forces rather than through evolution, Hrischuk wrote that he supports teaching evolution in schools. “It isn’t clear to me what ‘creationist’ is supposed to mean,” he added. “But it is something that must be bad?”

Hrischuk’s signature appears on a statement entitled “A Scientific Dissent From Darwinism,” whose authors say they are “skeptical of claims for the ability of random mutation and natural selection to account for the complexity of life.”

The statement was published by a subgroup of the Discovery Institute, an organization that promotes the creationist concept of intelligent design.

Hrischuk said he decided to run for the school board after learning of an incident in Loudoun County, Va., in which a non-binary individual allowed to use the women’s restroom was convicted of assaulting another student. He did not respond directly when asked if he supported or opposed transgender-affirming policies in schools.

MacMiller, meanwhile, appears on a list of members of the New Group of Patriots, a self-described “growing populist movement” that seeks “to destroy the socialist takeover of our lives and the American dream.”

She is also listed as a participant in the NC Values Coalition’s Mama Bear Workshop. The workshop aims to educate parents on protecting children “from harmful curriculum and indoctrination in school.” The coalition’s website calls for combatting “progressive activists [who] have targeted schools as a primary conduit of social change.”

Issues such as support for transgender students and the teaching of critical race theory have become hot button topics in other school board races across the country. MacMiller did not respond to questions regarding her stance on those issues. The “Better Board, Better Schools” platform website states that the group is against “curriculum deviations” in Durham schools.

McCorkle said the emergence of the “Better Board, Better Schools” slate fits with a larger national trend.

“This is an area that the right wing, as articulated by Steve Bannon and others, think of as a good national strategy: to focus on school boards,” McCorkle said. Bannon, a political strategist who served in the Trump administration, has spoken publicly about the conservative campaign to target school boards.

In North Carolina, state law is helping to facilitate that campaign, McCorkle said. State regulations make school board elections nonpartisan by default, but the North Carolina General Assembly has the authority to adjust that rule on a county-by-county basis.

According to McCorkle, the Republican-controlled state legislature has seized advantages for Republicans by making school board elections partisan in North Carolina’s red counties. Out of 115 school districts, the number of N.C. school boards elected on a partisan basis grew from 16 in 2015 to 41 in 2022, according to data provided by the North Carolina School Board Association. Two additional districts are set to become partisan in 2024.

About two-thirds of the school boards that are now elected on a partisan basis fall within counties with a Republican majority, according to state voter registration data.

Meanwhile, the legislature has left nonpartisan school board elections in place in blue counties like Durham. In those counties, the lack of a partisan label helps Republican candidates, McCorkle said.

“I don’t think it’s that shocking that Republicans are maximizing their advantages,” McCorkle said. “They know that these races are sometimes kind of imponderable and low interest, and in Republican areas it pays to have that partisan label.”

Because Durham is so heavily Democratic, Busa says he believes it’s a prime target for the GOP.

“In Durham, this is clearly not a struggle for more or better representation,” he said. “This is an attempt at a takeover of a liberal county’s school board by radical conservatives.”

Above: A flyer advertising a joint fundraiser for the “Better Board, Better Schools” slate was featured recently on the group’s Twitter feed.