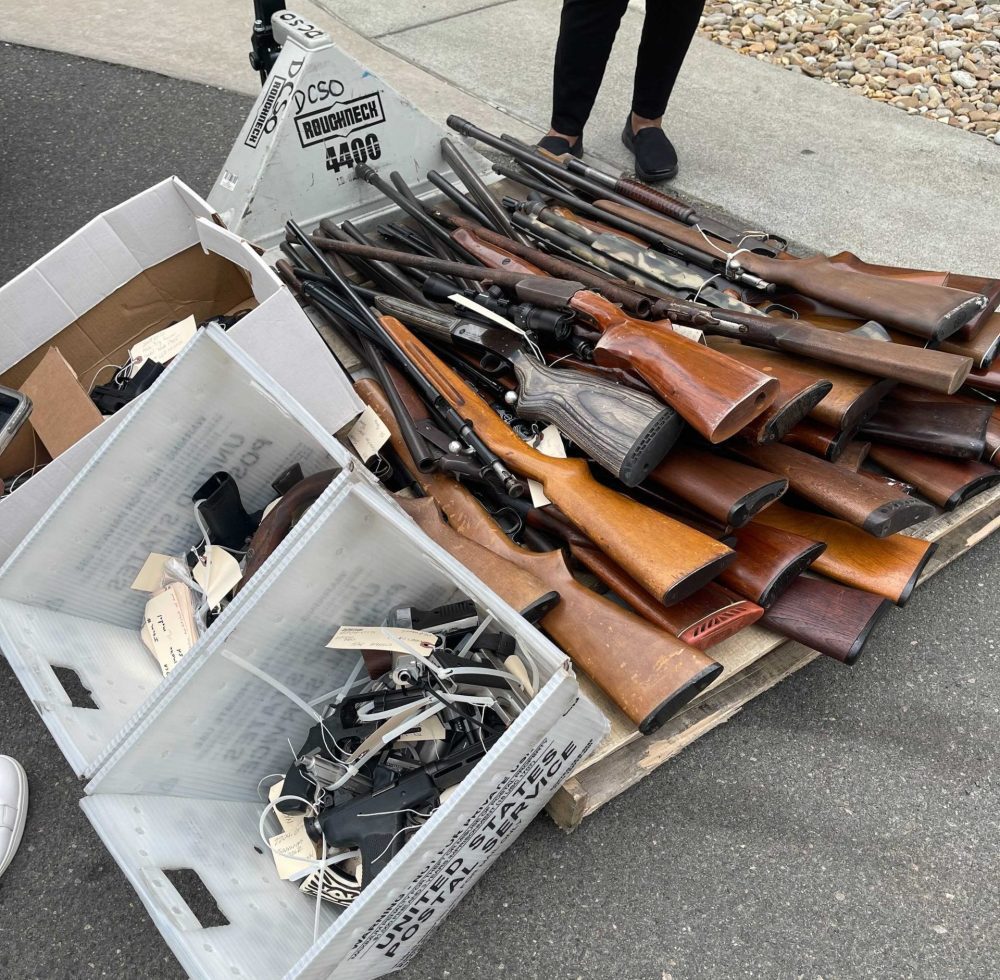 On a recent Saturday, nearly 100 shotguns, handguns and assault rifles of all shapes and sizes were unloaded from police vehicles outside of the Durham County Detention Facility.

Some were rusty muskets that looked straight out of the Revolutionary War. Others were sleek black pistols with added metal devices making the gun fully automatic and equipped to kill quickly. Most ominous of them all were revolvers with shiny metal barrels that conveniently don’t drop shell casings when they’re fired.

Michael Taylor, a member of District Court Judge Pat Evans’ community outreach team for her reelection campaign, pointed at one of the revolvers. “That’s the murder weapon,” he said.

The assortment of guns had one thing in common: they had all been bought back from Durham residents by the sheriff’s office April 9 in the county’s first-ever “Bull City Gun Buy Back.”

The sheriff’s office offered Visa gift cards as compensation, $100 for a shotgun, $150 for a handgun and $200 for an assault rifle. At both the Mount Vernon Baptist Church and Durham County Stadium, residents could bring their guns in for a financial reward.

At each location, deputies turned more than 40 people away after they had run out of gift cards.

One man brought in 13 guns. “If someone had broken into his house and robbed him, that’s 13 guns hitting the streets,” Taylor said.

“I was thinking if we got 10 that would be amazing. I’m stunned,” said Lieutenant John Pinner as he unloaded firearms from his trunk.

The buy-back event was organized by Durham County Sheriff Clarence F. Birkhead in partnership with Evans. Both Birkhead and Evans are running for reelection and are on the ballot in the May 17 primary.

The buy-back process was anonymous and voluntary, and there was no limit to how many guns an individual could turn in. The press release from the sheriff’s office stated, “No questions will be asked.”

Guidelines for the event were straightforward: Individuals were instructed to drive up in their vehicles, making sure their firearms were visible, so deputies could then retrieve the guns. Participants were compensated only for firearms that were operational.

“Some people gave us their guns even after we ran out of gift cards,” Evans said.

Evans, a former lawyer with the Durham County District Attorney’s office, has lived in Durham County for 39 years and served as a District Court Judge for the last four.

Fighting gun violence in Durham is one of the main promises of her reelection campaign. She proposed the buy-back event about a month ago as a way to get guns off the streets.

Evans noted that gun violence in the past four years has been especially bad. More than 1,900 shooting incidents have occurred in Durham since the start of 2020, wounding 650 people and resulting in nearly 90 deaths.

The sheriff’s office will catalog the guns collected during the buy-back event, then keep them for six months and issue public notices to verify that there are no legal owners who wish to claim them. Then, Evans will sign an order to have the guns either destroyed or used for training purposes, she said.

After both locations ran out of gift cards, the guns were brought to the Detention Center and loaded onto two large carts. Evans posed triumphantly behind them for photos. As Taylor recorded her on his iPhone, Evans said, “Thank you Durham, for joining us and taking ahold of our vision to make Durham a safer place.”

Evans said another buy-back day may take place later this month. Many residents who brought guns after organizers had run out of gift cards want to come back next time, she said.

Taking guns off the streets is only a first step, Evans added. She favors additional solutions that address the root of the gun violence problem.

“It’s not enough to just take these guns,” Evans said. “We need to replace them with jobs, with mental health treatment, with substance abuse treatment, with tools for people to have a sustainable life.”

Above: Firearms of all sorts were collected at Durham’s recent gun buy-back event. Photo by Sophie Horst — The 9th Street Journal

Published in Elections 2022 and Public safety