Maria Jocys was enjoying a successful career with the FBI when she rejected a promotion offer and asked to move back to Durham. Now, after a 24-year career with the bureau, she is running for sheriff in her hometown. 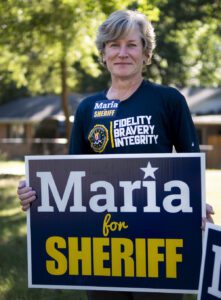 Jocys led the FBI’s Raleigh field office starting in 2007, and left that position in 2016. The Southern High School and East Carolina University graduate says she rejected high-ranking administrative jobs in Los Angeles, New York, and Washington, D.C. Instead, she says she requested an assignment to the FBI’s Raleigh-Durham Safe Streets Task Force, returning to Durham because she was disturbed to see violence take over the streets where she grew up.

“I said, ‘Put me in the room to work,’ because my commitment is to come here and to stop the violence, to help the young people that are becoming involved.”

Now, Jocys has her eyes on the sheriff’s office. Over the last five years working with the task force, she says she saw a lack of partnership, outreach, and proactiveness from current Durham County Sheriff Clarence Birkhead.

“As an FBI agent, I didn’t have a voice,” she said. “I felt that if I ran for sheriff and attained that position, I could have a lot more direct influence over helping a lot of the communities that are suffering, as well as bringing about real, true reform to the sheriff’s office.”

Despite her law enforcement skills, Jocys is struggling to gain traction with Durham’s political groups. She has yet to receive any endorsements from local political action committees.

And it is clear Jocys is no politician; at a meet-and-greet event at a supporter’s home in September, she spoke passionately but without the eye contact, confidence, or lofty promises of a seasoned politician. Instead, she responded to questions using examples from her experience with the FBI, seemingly flipping through a mental rolodex of past cases.

“I don’t see that as an obstacle,” Jocys said of her lack of political experience. “I see it as not being part of the political establishment in Durham. I believe in getting out and knocking on doors, meeting voters.”

Jocys describes her own politics as “down the middle, moderate.” She is registered as a Democrat but is running as an unaffiliated candidate in the race for sheriff, which she believes should not be a partisan position.

“Politics should not play into the safety and security of our communities,” she said.

A violent crime epidemic has ripped through Durham in recent years. Last year was a record-breaking homicide year.

Based on her time with the Safe Streets Task Force, Jocys says much of Durham’s gun violence stems from a gang feud that originated with a single murder back in 2017. Since then, several Blood and Crip gangs from in and around Durham have formed and broken alliances and created a seemingly unending cycle of retributive shootings, she said.

Jocys says racketeering cases will be instrumental in eradicating gang activity. She cites her personal experience with such cases, including the 2019 racketeering case stemming from the murder of nine-year-old Z’yon Person. In that instance, Jocys was able to bring one of Durham’s first successful racketeering cases against two members of the Eight Trey Gangster Crips, resulting in life sentences for both.

“It’s never too late,” said Jocys. “Action has to be taken.”

If elected, Jocys would seek to direct more of Durham’s affected youth away from organized crime and toward gang intervention programs such as Project BUILD, part of Durham County’s Criminal Justice Resource Center.

“It’s not about just locking people up, that doesn’t solve anything,” she said. “It’s about actually stepping back and looking at the problem holistically, and [asking] what would be more of an effective action to take—diversion treatment rather than arrest?”

Jocys says she learned this proactive approach to stopping crime in her years with the FBI. “I spent fifteen years working international terrorism and developing that skill, that if you know your threat, then you can create strategies and plans to implement to address it.”

Former FBI colleagues describe Jocys’ approach as hands-on. A Raleigh special agent recalls seeing Jocys in the office on weekends, photocopying thousands of pages of discovery for a case. Jocys says that her FBI experience gives her the hard skills necessary to alter the trajectory of violence and crime in Durham. She envisions bringing high-ranking investigators on normal patrols to help mentor younger officers. Developing Durham’s Criminal Investigative Division, guiding youth toward gang intervention programs, and bringing larger, more complex cases, like the 2019 racketeering case, are some of Jocys’ other priorities.

“There’s a ton of information and evidence that exists that locally just doesn’t get tapped into because [the current sheriff’s office] doesn’t look long-term,” she said.

“But I know, from my experience, that when you work as a team to solve problems, the impossible is possible. And I know that we can make a change here in Durham, that we don’t have neighborhoods that have lost hope. We can make a difference.”