Home » Date Night at DBAP: When love comes to the ballpark…. 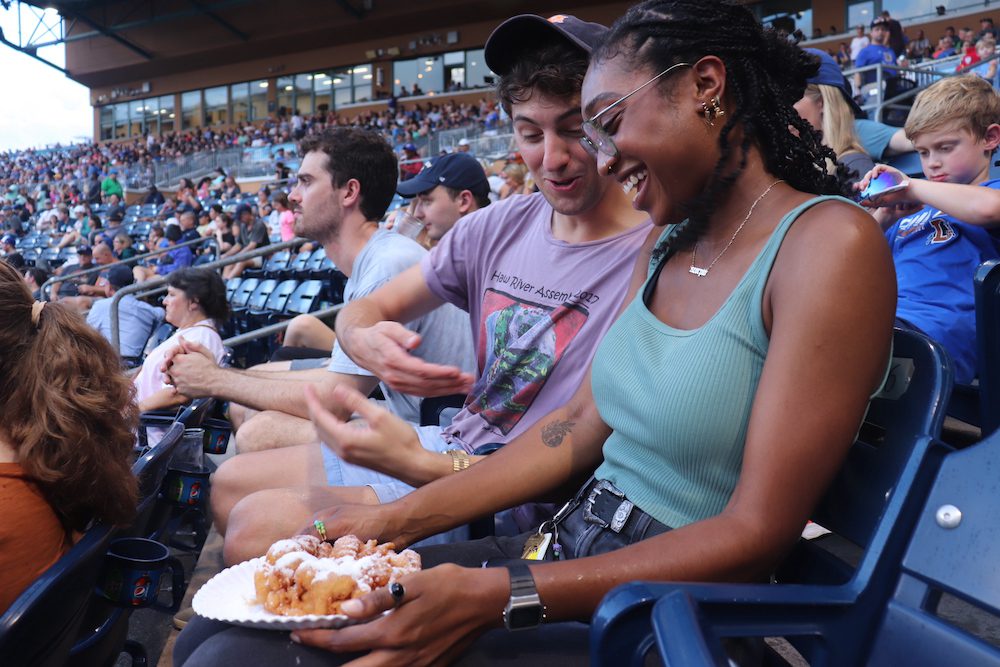 Date Night at DBAP: When love comes to the ballpark….

They have known each other for more than 50 years. They grew up together but went their separate ways, only to reconnect a few years ago. On a recent scorching Sunday, they sit out beyond right field at Durham Bulls Athletic Park, a married couple now, recalling how baseball helped draw them back together.

On a concourse, a minister and his wife sit together, savoring a pre-game dinner. They hold hands.  Over the years, going to Bulls’ games has blossomed into a sweet, semi-regular ritual.

Once the game starts, two twenty-somethings wander around the stadium, flirting as they search for food. They connected online, and they think they might like each other. They’re on a first date.

The Durham Bulls, who rode a five-game winning streak into the Triple A division’s International League championship game this weekend, don’t host an official Date Night at DBAP. But if a recent Sunday is anything to go by,  they don’t have to: We met lifelong soulmates, witnessed budding romances, and saw ample evidence that there’s lots of love to be found at the ballpark. Here are three couples’ stories:

A blind date began Karen and Kevin McHarg’s two-decade-long love story. As two “later-in-life folks,” they both went into it with the same mindset: the connection was either there, or it wasn’t.

But a full day of adventures that started in church and went into hiking, bowling and eating lots and lots of Mexican food told them everything they needed to know about each other. They talked about politics, whether the other wanted children, their futures, religion. All day long, Kevin said, they asked questions that shouldn’t be asked on a first date.

By their second date, at a neighborhood Christmas party, everyone already thought they were in love. Friends’ mothers began “planning a wedding” at that same party, and 10 months later, they were the McHargs.

The couple, originally from California, have moved around the world together, living in China and Germany  before settling down in Apex, N.C. Both in their 60s now, and still in love, the McHargs  enjoy getting time alone when they’re not at work (she’s an accountant) or at home with their two kids.

Just before the game began that Sunday, the two sat next to each other on the second-floor concourse, sharing pizza and salads. This season, they purchased a 10-game ticket pack for fireworks games, typically held on Fridays and Saturdays. But sometimes, to end the week, they like to have a date night on Sundays, which led them to the stadium that evening. 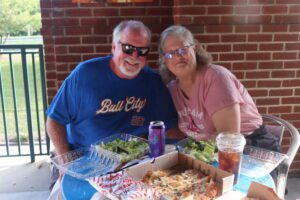 The tradition started when the family first moved to the area and got tickets to the PNC Triangle Club, a luxury seating option at the stadium, through her job. Karen and Kevin remember the day vividly, as their young sons met Wool E. Bull in the elevator.

“We came back the next time, and our youngest was selected to run the bases with Wool E. Bull,” Kevin said. “And from that point forward, he was baseball. Nothing but baseball. Baseball all the time. He slept with his glove and with his ball, he was always baseball. And so we just decided that this was a great place.”

As game time approached, they took each other’s hands, preparing to laugh and tease between innings. Being at the ballpark also means letting loose while they root for the home team.

“This is the place to go yell and scream,” Kevin said with a smile.

An older couple sat together, high in one of the 100 sections beyond right field, in the sunshine. As the woman used her hands to fan herself in the 95-degree heat, the man took off his Durham Bulls bucket hat and placed it on her head.

The couple, Marie and Randy Jones, grew up going to the same church, but when they first met more than five decades ago, it was taboo for them to mix. That’s because she went to Raleigh City School and he went to Wake County School.

“Raleigh City thought they were better than anyone at Wake County,” Marie, 70, said.

The two began going out only about five years ago after a chance reconnection. They bonded over lots of things, especially their love of baseball. She grew up going to softball and baseball games, and he played both sports until 1988 when he got “knocked out at home plate” and decided to hang up his cleats. 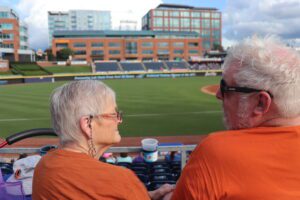 As they grew closer, both realized they were The One. So after a year together, Randy proposed on a riverboat cruise in Wilmington. She said she would think about it and let him know in three weeks. But three days later, she called him up to say yes.

“Best thing that ever happened to me,” said Randy, 69, of marrying Marie.

The feeling is apparently mutual. Marie loves him for many reasons, but says she really appreciates his selfless kindness.

“No matter how hard or how much he  may have wanted to watch something on TV,” she says, “he will get in the car and drive me wherever I need to go and not say a word.”

Before the game, Hunter Spitzer and Amaris Smith each stood alone before they found each other outside the ballpark. The two had never met in person, but they had talked for several days after matching on Hinge, a dating app.

Each thought the other seemed nice and friendly — someone worth getting to know. In their first conversation, they complimented each other’s smiles. In their profile photos, they both beamed.

From there, they talked about music. Spitzer first sent Smith a playlist, and then she sent one back. The one she sent was full of love songs.  After Smith sent him the playlist, Spitzer wasn’t sure what to think.

“I told him to read the vibes,” Smith said, laughing.

He then asked if she wanted to go on a date, and just a few days later they made it to the ballpark.

Spitzer, who is 24 and a researcher, grew up in Hillsborough, N.C., and had always known the stadium as a place to have fun. If the conversation drops off, there’s always the game to talk about, he joked.

At first, as the two met outside the stadium before heading in, things were slow and quiet.  But the atmosphere–small children dancing to the players’ walk-up songs, on-field entertainment between innings, and the game itself–eventually gave them plenty to talk about. 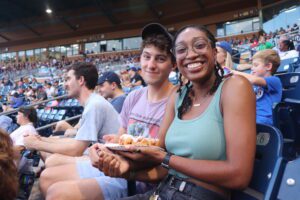 Soon, they traversed the park, exploring its ins and outs and searching for the perfect funnel cake. They found one at a stand near a side exit. After grabbing their snack, the two headed back to their seats to share the messy but delicious-looking treat.

Hunter flashed a smile and agreed: “I’m having a lot of fun.”

The Bulls fell to the Scranton/Wilkes-Barre RailRaiders, 14-2, that evening, but the couple enjoyed the evening nonetheless—so much so that they decided to go on a second date.

At top of story: Hunter Spitzer and Amaris Smith share a funnel cake at a recent Durham Bulls home game. It was their first date. Photo by Ana Young — The 9th Street Journal