Home » Fans cheer the Durham Bulls during home opener, despite the score

Fans cheer the Durham Bulls during home opener, despite the score 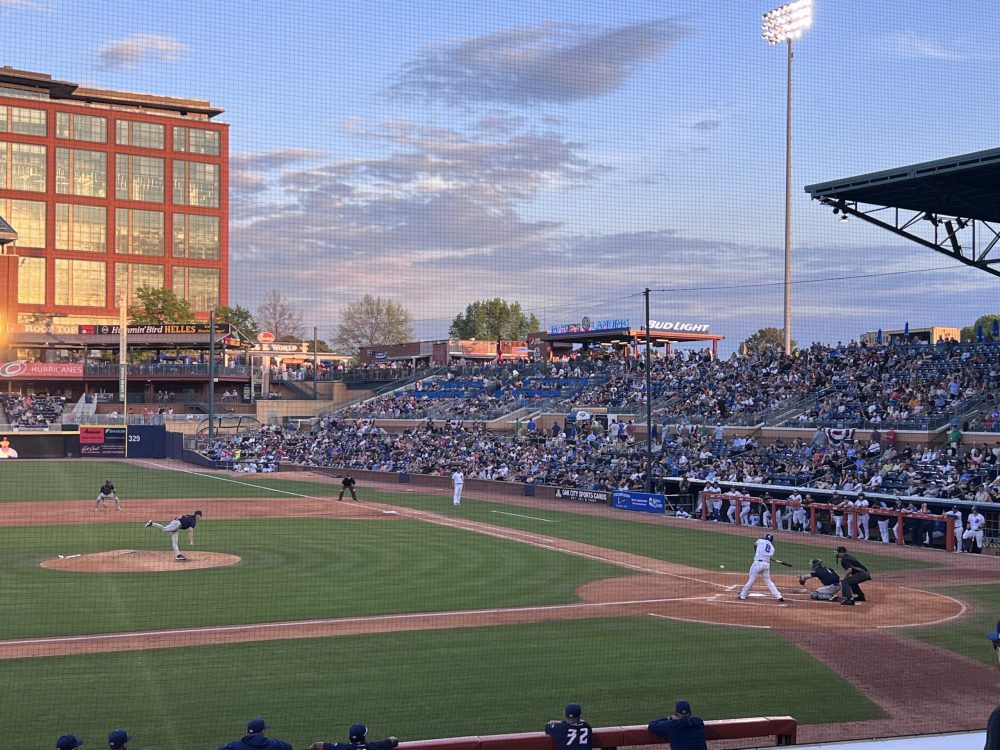 Second baseman Isaac Paredes has just struck out to end the game, as the Durham Bulls lose to the Jacksonville Jumbo Shrimp. But fans don’t seem upset. They hang around, as the stadium lights dim and fireworks paint the sky. They smile. Heads lean on shoulders. Couples look at each other with shining eyes. Baseball season is back.

A home-opening loss — especially a 7-0 thumping — is nothing to celebrate, but new beginnings are. And that’s what 7,824 fans were doing Tuesday night at the Durham Bulls Athletic Park, where they enjoyed a clear, pleasant night that featured lots of energy and entertainment, most of which occurred off the field between innings.

Fans dressed in sumo-wrestler costumes — complete with enormous bellies —  raced along the third-base line. A local celebrity couple led the crowd in song. There were, of course, the usual goofy antics from the team mascot, Wool E. Bull.

Just before the opening pitch, fans watched a squadron of jets fly over the stadium after the singing of “The Star-Spangled Banner” in honor of military men and women. Multicolored confetti floated down into the stands.

“The major leagues and everything is so expensive. Hockey, baseball, whatever, are so expensive,” said Bart White, a Raleigh resident who has attended Bulls games for decades.  “This — you get a good bang for your buck. They do a great job anytime entertaining between innings. It’s great for families and kids.”

Before the game, two long security lines stretched from the intersection of Blackwell Street and Jackie Robinson Drive, as hundreds of fans waited to enter the ballpark. Bulls employees ushered fans into the lines as they took photos with Wool E. Bull or waited for the rest of their group to arrive. Food trucks and heavy traffic lined the streets. Pop and country music blared from the speakers.

College student Ike Perry was among about 50 people in the Bulls team store rifling through baseball caps, Bulls hockey jerseys and other merchandise. Near the stuffed Wool E. Bulls at the back of the store, Perry looked at shirts with his brother as they waited for their father.

Perry hadn’t been to a game in three years. But his father got their family season tickets this year, so the Wake Forest resident hopes to catch every game. Like White, he was also excited to see that night’s off-field entertainment.

“They used to get fans to come out and play with sumo suits and fight,” he remembers. He and his brother planned to enjoy hot dogs and beer. They also intended to search for ice cream served in Mason jars — which he remembers as a Bulls specialty.

Inside the stadium, an array of aromas greeted fans. They could buy virtually every kind of carnival food — cotton candy, funnel cakes, wings, hot dogs, pretzels, IPAs. As White’s friend, Tom Holmes, purchased an IPA, he said he was feeling “pretty damn confident. Their team is called the Jumbo Shrimp. We can beat the Shrimp.”

The Jumbo Shrimp apparently thought otherwise. In the first inning, outfielder Peyton Burdick slammed a solo home run. The game unraveled for the Bulls in the second inning, when Bulls starter Adrian De Horta and reliever Zack Erwin combined to allow two walks, three singles and a double as the Shrimp rocketed to a 6-0 lead. All after two outs.

“I mean, for us, it was trying to get to the fifth inning. Just with our starters — we don’t really have any starters right now,” Bulls manager Brady Williams said after the game.

At the same time, Jacksonville starter Max Meyer pitched five hitless innings. The Bulls would finish the game with only two hits.

Williams said the team has little experience together, with players arriving from other teams as late as last Sunday, April 3.

“There’s things we’re going to do as far as team get-togethers or just trying to get to know each other as quick as we can,” Williams said.  “Once it happens, the chemistry will get better.”

Even after the game got away from the Bulls, the crowd stayed. Beginning in the top of the fifth,  fans started clapping when every Jacksonville player came to bat. The Jumbo Shrimp would score only one run the rest of the game. Maybe the fans should have used that tactic earlier.

The Bulls, off to a 2-5 start, have five more games in their series with the Jumbo Shrimp at the Durham Bulls Athletic Park before traveling to Norfolk, Va., for their second road series. Last year, with an 86-44 record, the Bulls won their third Triple-A championship. The Bulls are the Triple-A affiliate of the Tampa Bay Rays, and last season, Durham’s best players moved up to play for the American League club.

This year, the Bulls will play 150 games, instead of the 130 they played last season.

“Hopefully, we can continue to do what we’ve done over the last couple of years, which has been a lot of fun,” Williams says. The manager says he expects his team to improve and contend again for a championship.

“Those are our goals every single season,” he said.

Above: Photo of the Durham Bulls’ home opener by Bill Adair — The 9th Street Journal