Home » A Durham Moment: A pageant where camp is queen 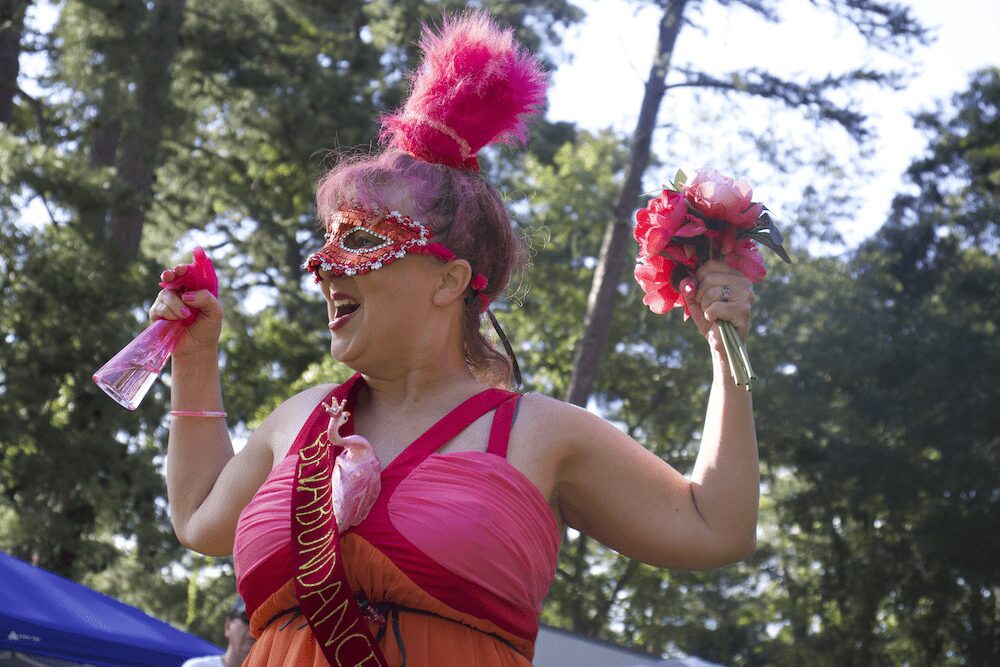 A Durham Moment: A pageant where camp is queen

At Camp Bushy Valley, the word “camp” is an understatement.

A Victorian beaver — in a red burlesque skirt under a black dress, a sequined sailors cap, steampunk glasses and a sunflower umbrella — marches with a parade. Eliza DuBose, a fish-tailed beaver in seaweed beads, flamingo sunglasses and an aquamarine octopus hat, prances around the campground. Another beaver wears rainbow sunglasses, a green fedora with flowers and a butterfly shirt. The setting looks and feels like a scene from Wes Anderson’s “Moonrise Kingdom.”

It’s June 4, and the Beaver Queen Pageant, a fundraiser for the Ellerbe Creek Watershed Association, is celebrating its 18th birthday. Hundreds of neighbors, volunteers and visitors come together for an afternoon in the meadow at Duke Park to celebrate the pageant’s first year in person since 2019. It’s one large village party featuring parades, dancing, environmental activism and an actual pageant crowning the newest Beaver Queen. 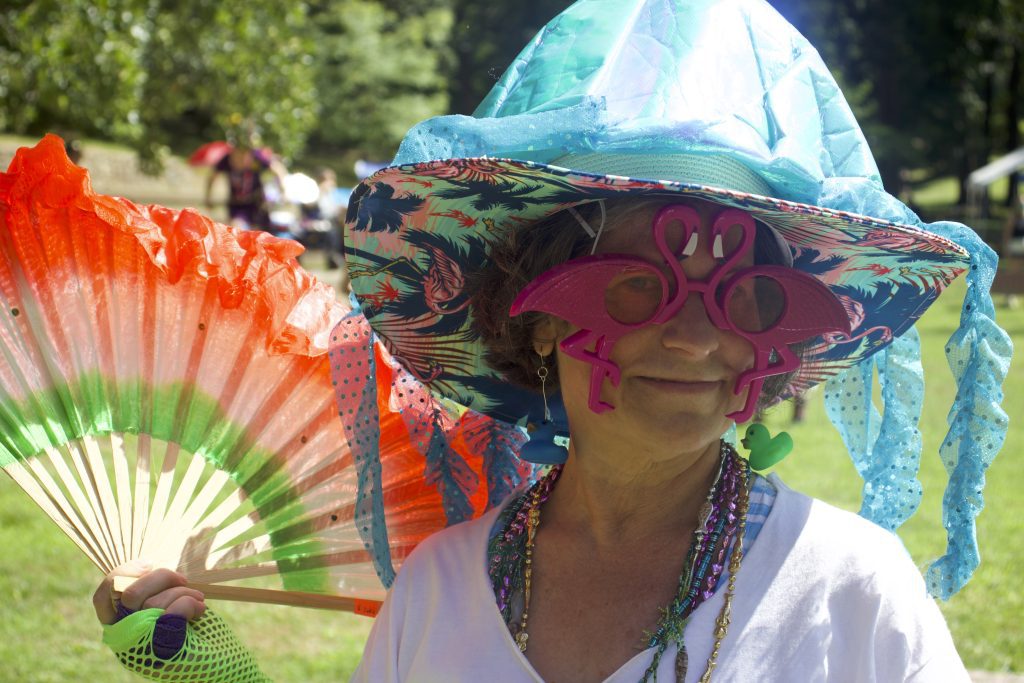 Long before the queen is chosen, bubbles blow from an entrance tent and funk music plays from the speakers while the crowds make their way towards an amphitheater. Food trucks quickly line Acadia Street next to the park. The line for a Durham staple, LocoPops, extends at least 20 feet.

Early in the afternoon, entourages representing the pageant’s contestants walk around asking attendees to “bribe” the judges so their beaver can win. Votes cost five dollars each. Charlee Halpheen and Susan Bowker carry a Tinder-themed photo booth and ask people to vote for Tinder Beaver. Others simply encourage pageant-goers to head to the voting tent, where those who vote at least 20 times can choose a home-crafted beaver tail to keep. 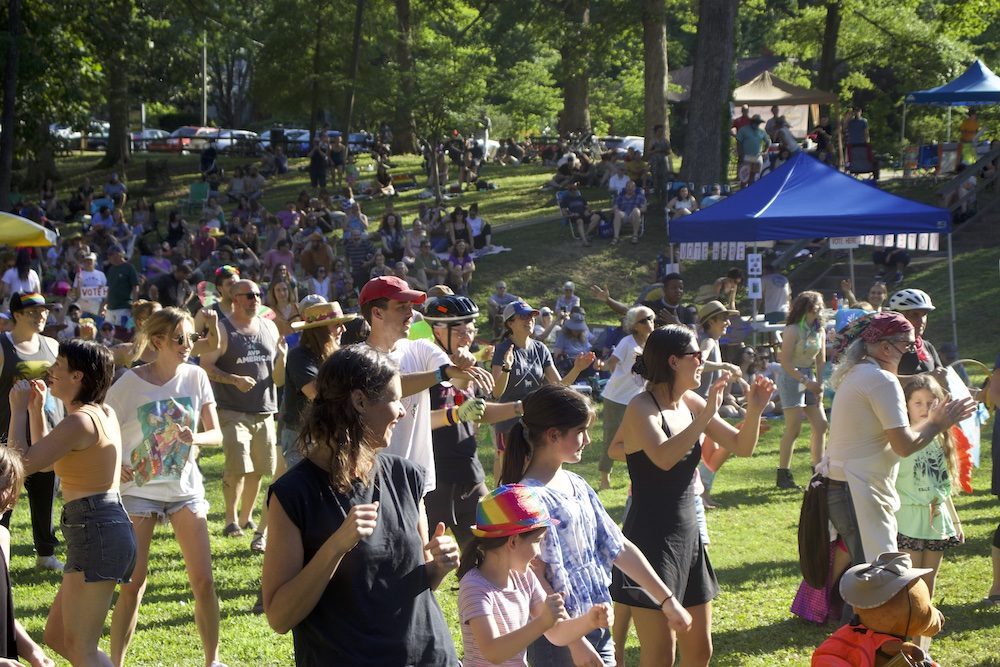 Mike Shiflett, a Durham resident since 1984, talks to neighbors from a tent labeled “Ellerbe Creek Watershed Association.” Dressed in a red long-sleeve button-down with the label “steward,” the white-haired, retired business owner passes out pamphlets offering information about Ellerbe Creek. He explains how the pageant came to be.

“They were widening [I-85], and one of the things that they were trying to do is mitigate flooding. And who causes flooding? Beavers,” says Shiflett, a longtime volunteer with the association. “So this neighborhood, Duke Park, found out that the North Carolina Department of Transportation was going to trap beavers. And when you trap beavers — you end up killing them.”

Residents were outraged, he remembers. Standing nearby, an old friend Barry Ragin, president of the Duke Park Neighborhood Association at the time, chimes in.

“They ended up moving behind the Compare Foods — the shopping center just on the other side of [I-85]. So there’s a huge beaver lodge there. One of the biggest on the East Coast.” 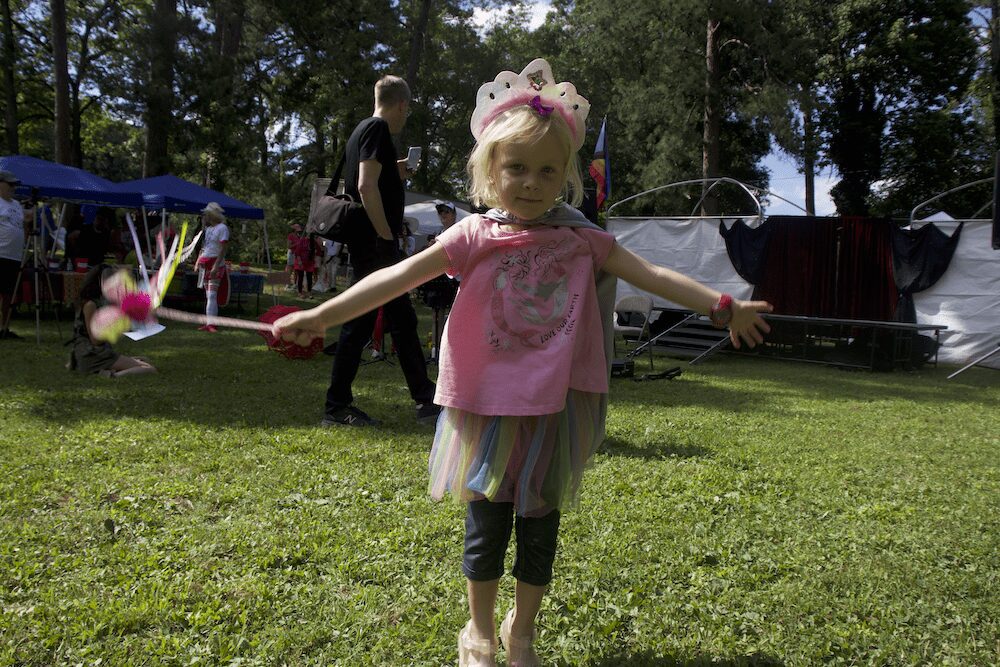 “There was a 14-year-old who competed…,” Ragin says. “Her dad, the late Bill Anderson… went to a number of the judges and said, ‘Here’s one dollar — vote for my daughter to be the queen.’

“And at the end of the day, we had something like 10 or 15 dollars. And we didn’t know what to do with it. So we gave it to Ellerbe Creek Watershed Association. And then the next year, we decided we would actually try to raise some money, and we raised closer to $100. And then the third….raised closer to $1,000. And now, I understand it’s getting close to $30,000 a year.” 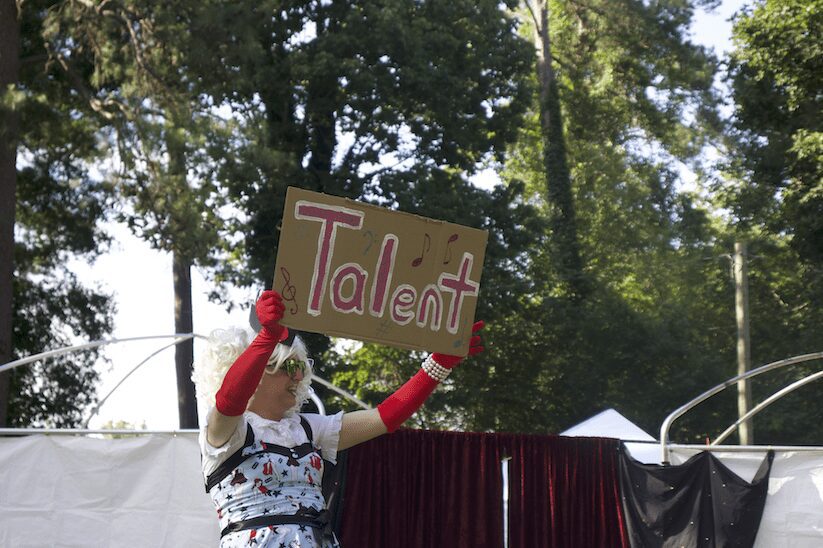 Shifflet and Ragin aren’t the only long-time pageant supporters in attendance. Bill Anderson’s daughter, Jill Anderson, is one of this year’s pageant’s head organizers, along with Greg Palmer. The very first Beaver Queen, Beverly Woody — whose real name is Richard Mullinax — also attends, dressed in scrubs and a name tag that says OGBQ (Original Gangster Beaver Queen). The former Beaver Queen walks around the campground, offering male and female condoms and lube to hundreds of people watching the stage.

In the foreground, the show begins as the Bulltown Strutters lead a parade, marching down towards the stage from a hill. People in the crowd dance along with the train as the emcee makes his way toward the microphone. He’s wearing a 1960s-esque Boy Scout counselor uniform with a homemade beaver tail. Soon enough, he introduces another emcee who calls himself Dante. 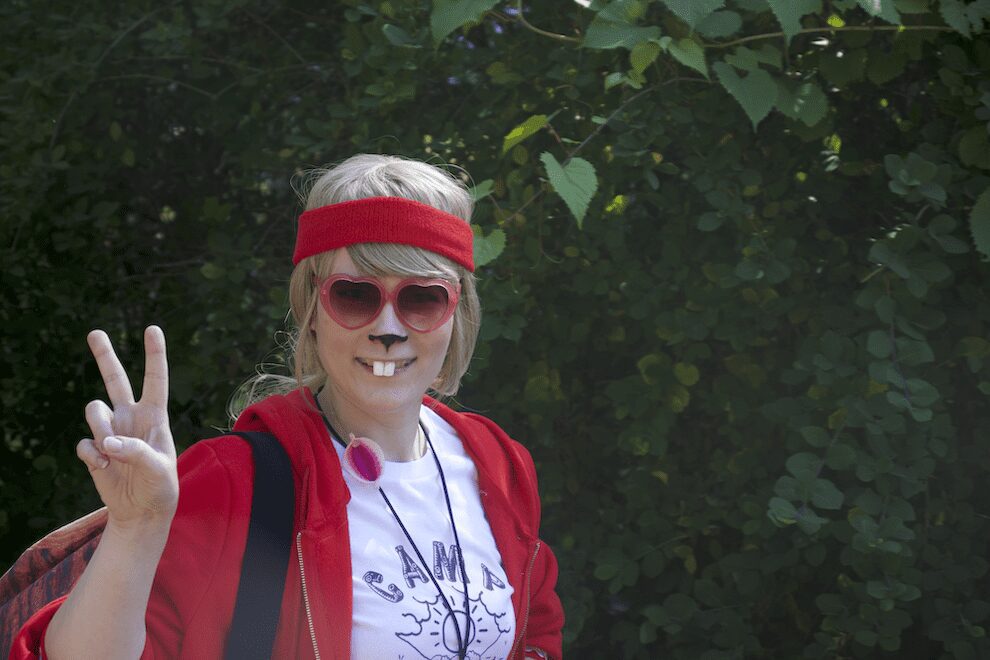 Before the actual contest can begin, Dante leads the crowd in “The Blessing of the Kits.” He calls upon all families with children to make their way to the stage. He then leads the children in an environmentally-focused prayer.

“To Mother Nature, we pray for the planet,” the blessing begins. “Breath of life, from whom all order was created. The whole of creation bears witness to you. Teach us to respect all creatures and all people and increase our gratitude for your loving providence….” 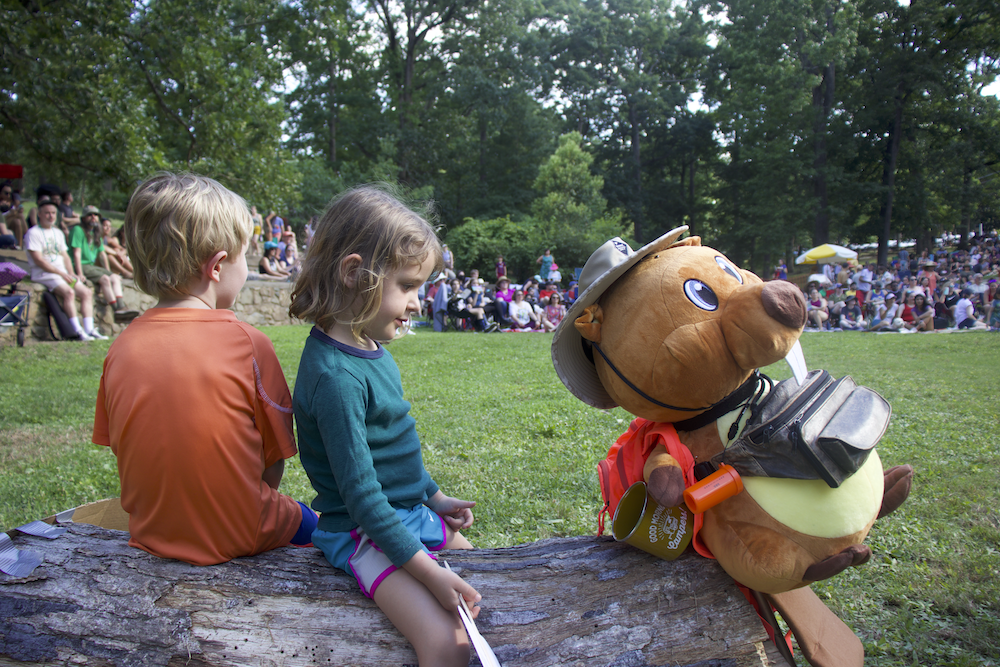 “Put a Little Love in Your Heart” by Jackie DeShannon plays as the crowd dances along. Then the six judges — each representing a brewery sponsor — come out dressed as historical figures and pop-culture characters, including Ruth Bader Ginsburg (Tooth Beaver Ginsburg) and Julius Caesar (Chewlius Caesar). Each judge states what they’re looking for in a Beaver Queen.

Next comes the talent segment. One contestant blends a smoothie using a bicycle. Another performs Janelle Monae’s “Pynk.” Tinder Beaver sing-raps a song full of puns about dating apps. Another beaver dances while spraying perfume. Ballet Beaver dances to Swan Lake (of course). The judges deliberate and count the votes.

In the end, each beaver receives a title. Satine Bieber has the Best Tail and Costuming, and Pawryshnikov Gnawjinski is the Best Talent. Beavabundancer is the Craftiest Beaver, Tinder Beaver is Miss Hygeniality and Velour Gnawsett Peltenham Riverdancer West has the Best Stage Presence.

A prima donna ready to find a hunky beaver to settle down with takes the biggest prize. Tinder Beaver, with a social score of 533 and $2,590 raised, is voted queen. 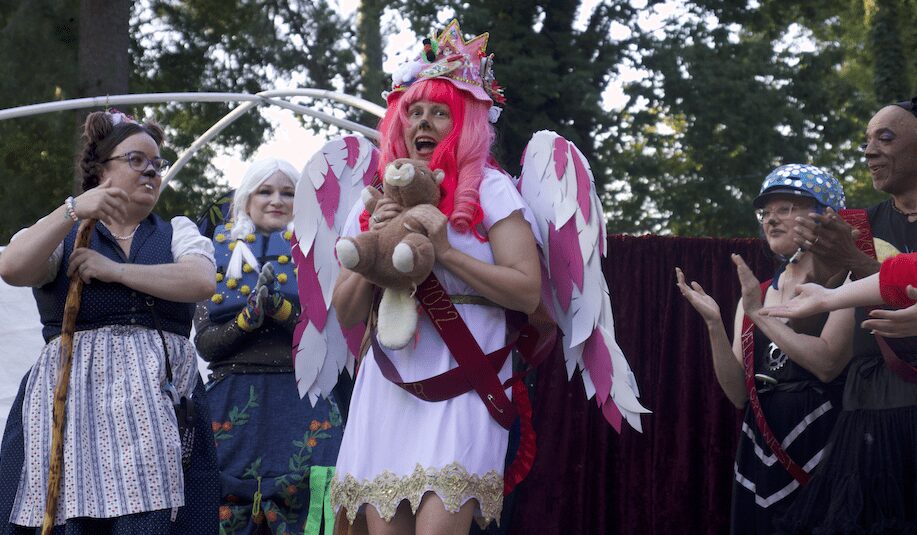 She receives her crown — a pink bucket hat with felt pointy edges, sequins and hand-sewn animals. Then the song “Dancing Queen” by ABBA plays. Instead of “digging the dancing queen,” some organizers sing “digging the Beaver Queen.”

For the children in the audience, the win is out of a fairytale. They run up to Tinder Beaver to hug and congratulate her. She embraces them and the other contestants, smiling with surprise and shock.

“I was so out of breath because my heart was going a million miles a minute,” says Tinder Beaver, whose real name is Alisa Hassinger. The first time she performed or practiced her talent was during the show, she explains.

“It was very surprising — but it was so much fun,” she exclaims.

Then she heads back into the crowd to dance again. 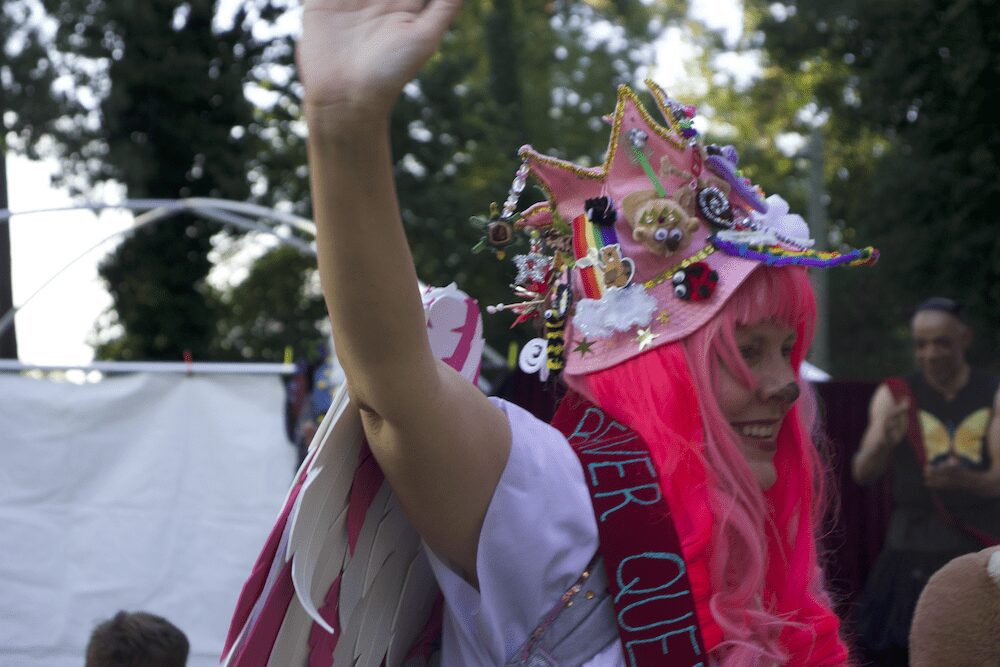