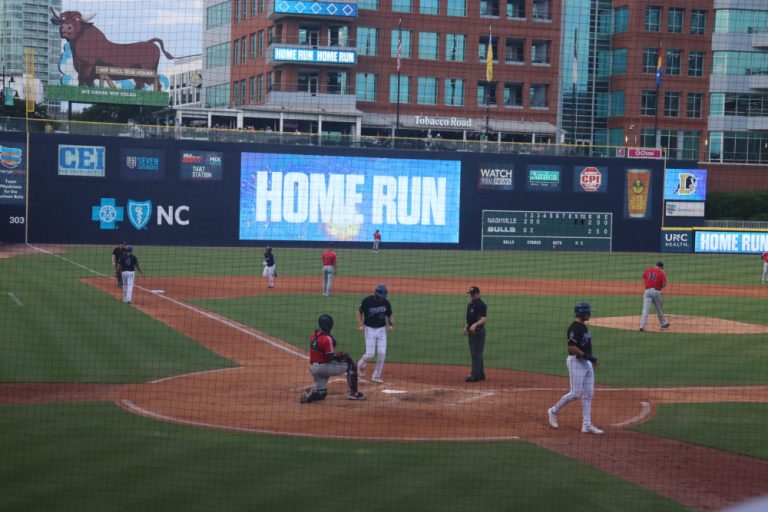 Their home city’s heatwave may be easing this week, but the Durham Bulls’ bats continued to scorch the Nashville Sounds Thursday night, with a multi-home-run barrage that carried them to a 9-7 victory.

Led by newcomer Jordan Qsar, who belted two homers, the Bulls overwhelmed the Sounds with power hitting for the second game in a row at the Durham Bulls Athletic Park. They’ve now hit 11 home runs in their last two games. Three have come off Qsar’s bat.

“I think at the end of the day, the only adjusting is probably – you know – new atmosphere, new territory,” said the outfielder, who played his fifth game for the Bulls Thursday night after coming from the Montgomery Biscuits. “But the game is the game. The only thing you can do….is keep doing what you’ve been doing, and just keep playing and sticking to your approach.”

On a cool evening that was a welcome respite from Durham’s recent 90-plus degree days, the Bulls homered half a dozen times. The night before, the Bulls’ five home runs catapulted them to a 17-4 walloping of the Sounds, who lead the Triple A’s International League West division.

The Bulls (27-24) occupy fourth place in the International East division.

After Nashville’s Mark Mathias started Thursday’s scoring with a two-run homer in the first inning, Qsar matched him in the second with a line-drive home run that also scored shortstop Xavier Edwards, another Bulls newcomer.

And Edwards wasn’t finished. With Josh Lowe and Luke Raley on base in the third, he blasted a three-run homer, which Qsar and Jim Haley followed with back-to-back solo shots that propelled the Bulls to a 7-2 lead.

Not that the Sounds went quietly. In the fifth, Nashville designated hitter Garrett Whitley’s solo homer and Pablo Reyes’ bases-loaded walk trimmed the gap to 7-4.

Even after the Bulls’ solo home runs by Jonathan Aranda and Lowe in the bottom of the fifth extended the lead to 9-4, Nashville didn’t go away. In the seventh, the Sounds loaded the bases and managed one run, when David Dahl scored on Mathias’ double play. Later that inning, Tyler White hammered a homer, slicing the lead to 9-7.

But Bulls relievers Seth Blair and Cristofer Ogando kept the Sounds off the board the rest of the game. Blair got five outs in the seventh and eighth innings, and Ogando blanked Nashville in the ninth.

Pitcher Easton McGee, who threw five innings and gave up three runs, got the win and improved his record to 3-3. Ogando picked up the save.

The six-game series continues tonight at 6:30 at the Durham Bulls Athletic Park..

“The more the merrier, because home runs are on the board,” Williams said of the Bulls’ recent long-ball hitting. “You know, the one thing a home run does is it electrifies the group, you know, and the dugout gets fired up.”

TOP: Durham Bulls Josh Lowe and Luke Raley score on an Xavier Edwards home run in the bottom of the third inning of Durham’s 9-7 win Thursday night over the Nashville Sounds. Photo by Ana Young, The 9th Street Journal.