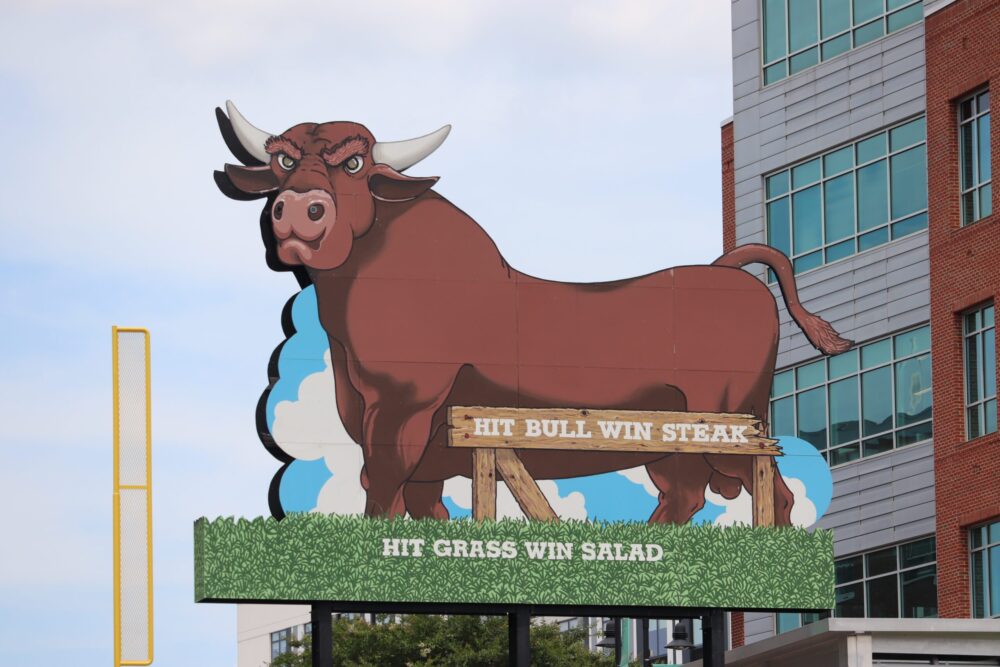 Sports Illustrated and Rotten Tomatoes (and many film critics) call it the best sports movie of all time. It’s got highly quotable characters, hilarious scenes and a hearty hometown feel to it. Thirty-four years ago this summer, the movie Bull Durham was released, transforming a relatively unknown minor league team into one of the most recognized names in all of professional baseball.

The astronomical impact even got its director and screenwriter to write a book about it, released July 5, called “The Church of Baseball: The Making of Bull Durham: Home Runs, Bad Calls, Crazy Fights, Big Swings, and a Hit,” referencing the opening narration by Annie Savoy (played by Susan Sarandon).

“I’ve tried ’em all, I really have, and the only church that truly feeds the soul, day in, day out, is the Church of Baseball,” Savoy finishes her proclamation.

Today, when fans visit the Bulls at the Durham Bulls Athletic Park, they see iconic landmarks, such as the Lucky Strike water tower on the American Tobacco campus behind the Blue Monster, and of course, a giant bull sign in left field that reads, “Hit Bull, Win Steak. Hit Grass, Win Salad.” But where did the Snorting Bull come from, and what does the movie have to do with it?

Yes. The bull shows up in only one scene, where a character named Burt Crook from the Fayetteville Generals (an actual minor league team that played until the 1996 season) hits it.

In the scene, Bulls catcher Crash Davis (played by Kevin Costner) orders up a curveball from Ebby Calvin LaLoosh, aka “Nuke,” a hot-headed newcomer who thinks he’s smarter than the veteran catcher. Nuke serves up a fastball that Crook belts for a homer, striking the Snorting Bull sign that stands next to other billboards.

“Look at that, he hit the f****ing bull,” says Davis, laughing at Nuke after the home run. “Guy gets a free steak.”

In the movie, the other outfield billboards—for a famous sports company, a cologne, and two Durham newspapers (one of which is now defunct)—represented actual businesses, but the bull sign was simply a nod to another iconic baseball sign: Abe Stark’s “Hit Sign, Win Suit” at Ebbets Field, where the Brooklyn Dodgers played until they moved to Los Angeles in 1957. Batters whose home runs struck the sign earned a free suit at Stark’s Pritkin Avenue clothing store.

“Abe Stark became kind of a local personality,” said Bull Durham’s director and screenwriter Ron Shelton, in an interview with The 9th Street Journal, during which he recalled how he came up with the idea for the sign. “I read about all this. I wasn’t Brooklyn-born. So I always had that in the back of my mind. When I got there—the ballpark, the old Durham Athletic Park—I just was looking up over the right-field fence, and there was that mound of grass, and I thought, what a perfect place to do a minor league version of that. It wasn’t in the script. I added it once I got there.”

He added: “It’s fun in that….kind of vaudeville, show business aspect of the minor leagues. You know the bull snorted and the tail wagged and the eyes lit up and you know—it’s just a kind of minor league feel to it.”

How did it end up at the ballpark?

After production concluded, Shelton and the crew left the sign for the real-life Bulls as a memento. When the Durham Bulls moved to the newer ballpark at the American Tobacco Campus in 1995, a version of the Snorting Bull came with them. Tom Evans of the Syracuse Mets was the first player to hit the sign, on May 26, 1998. Scott McCain was the first Bull to do so, later that summer on Aug. 16.

No. The bull from the movie was demoted to being on display in 1995 when the team moved to the new ballpark, while a new bull replaced the prop on the field. A third sign replaced the second one in 2008 after wind gusts tore the replica’s head off. Today, the current bull reads “Hit Bull, Win Steak. Hit Grass, Win Salad.” The original sign is in storage.

Do the players really win steak?

Yes. But only Bulls players get to cash in their prize, which they do at Angus Barn, a steakhouse in Raleigh, thanks to a partnership between the American Tobacco Campus and the restaurant. Players who hit the bull part of the sign get a $100 gift card to buy any steak or meal on the menu.

(Players who hit the grass part win a free salad at the restaurant.)

“The Goodmon family [owners of the Durham Bulls] came up and said, ‘Would you guys like to do something?’” said Steve Thanhauser, co-owner of Angus Barn, in an interview with The 9th Street Journal. “…That bull is out there in the outfield….it’s said forever, ‘Hit Bull, Win Steak.’ And so we said, ‘Well, let us provide the steak.’”

Typically, players go to the restaurant the next day or pretty soon after hitting the sign. However, the steak/salad offer still stands even if they don’t redeem it right away.

How often do players hit the bull?

Not often. In fact, entire seasons sometimes go by without a player launching a ball over the left field wall.

“That’s a tough one to kind of plan on [hitting the bull]. You kind of just take homers, and wherever they go, you’ll just take as a hitter,” said Mike Brosseau, a Milwaukee Brewers infielder who played for the Bulls during parts of the 2019 and 2021 seasons. (He hit the sign last season.)

“That’s one of the home runs in my career that probably sticks out a lot,” Brosseau said. “And, yeah, it was just one of those things that I think I was slumping pretty hard, and during that time when I hit that home run….I don’t know. Maybe that helped me turn the corner a little bit.”

Last summer, two Bulls actually struck the sign in successive at-bats in their Aug. 19 game against the Jacksonville Jumbo Shrimp. Josh Lowe (who now plays for the Tampa Bay Rays, the Bulls’ major-league affiliate) hit it first, pounding the grass to win a salad. Brosseau swung next and thumped the bull. Several days later, the two went to Angus Barn together to reap their rewards. Brosseau ordered the ribeye.

Published in Life in Durham and Sports