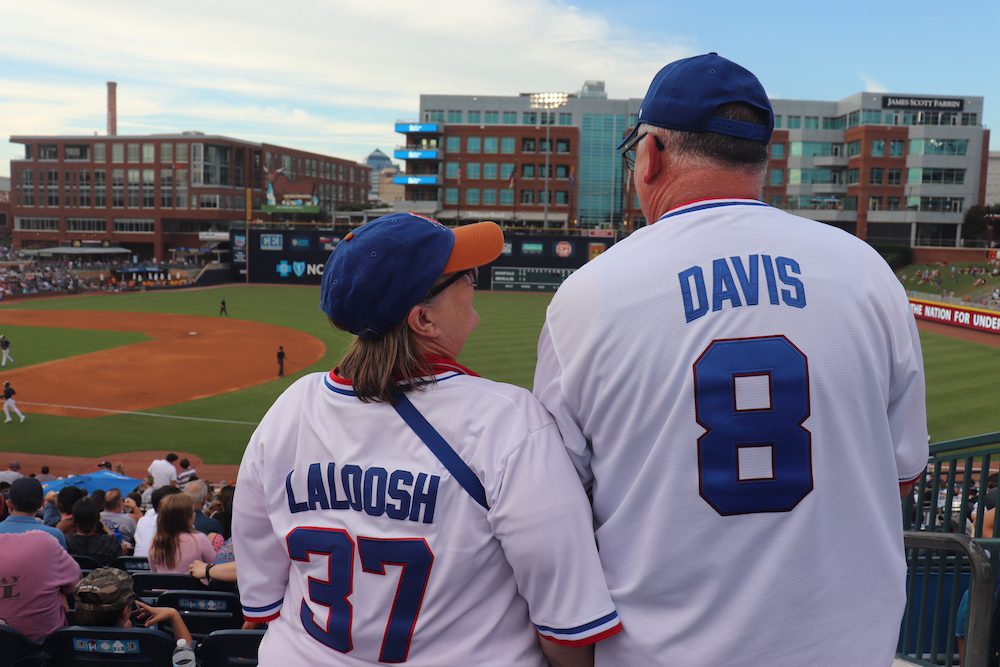 On Bull Durham Night, a cult classic comes to life

Taylor Seabrease was 15 the first time she watched the 1988 baseball film Bull Durham. That was back in 2009. Since then she has seen the cult classic at least 15 times.

“I like baseball, I like Kevin Costner and I just think that all the comedy and inside jokes in the movie are really, really great,” she said, eyes wide and a smile flashing.

Seabrease, who lives in Maryland, traveled from her home state with her boyfriend for last Friday’s annual Bull Durham Night, when the Durham Bulls honor her favorite movie.

She looked forward to “seeing the Shower Shoes take home a win.”

Each year, players, coaches and the manager wear a new jersey referencing a scene from the film. This year, they were the Durham Shower Shoes: in an early scene, veteran catcher Crash Davis (played by Costner) finds the shower shoes of pitcher Ebby Calvin ‘Nuke’ LaLoosh (played by Tim Robbins) covered in fungus.

“You’ll never make it to the Bigs [the Major Leagues] with fungus on your shower shoes,” Davis says.

Seabrease’s boyfriend wore a Shower Shoes cap he bought in the team’s retail store. The shower shoes scene is always fun to watch, Seabrease said. But her favorite scene? It’s when the team mudslides through a baseball diamond at night after drenching the field with sprinklers. It always makes her smile and laugh, especially on days when she needs a feel-good moment.

Bull Durham Night is typically held at Durham Bulls Athletic Park in early to mid-June, around the anniversary of the movie’s world premiere. But this year it was held Friday, July 22, as the “Shower Shoes” played the Norfolk Tides. 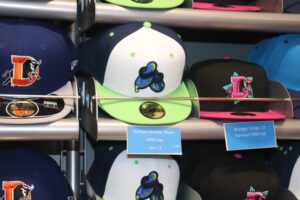 On social media, the Bulls became the Durham Shower Shoes. Ushers wore unique Shower Shoe-green polos. Fans scattered throughout the ballpark were clad in previous years’ Bull Durham Night merchandise and in Shower Shoes gear. Ahead of the game, the social media team tweeted a reference to Bull Durham character Annie Savoy (played by Susan Sarandon), the team’s biggest fan and the focal point of a love triangle that involves Crash and Nuke.

“We believe in the church of baseball,” the tweet said, an homage to Savoy’s famous opening monologue.

The scene at the stadium traveled across the silver screen into real life.

Husband and wife Robert and Teresa Shell sat next to each other at the top right corner of the stadium, in front of the Bud Light bar. Robert, who appeared to be in his late fifties, wore a white, red and blue jersey with Davis’ name stitched on the back. Teresa, who looks to be about the same age, wore a matching LaLoosh one. Besides the one he wore, Robert owns nine other Bulls jerseys.

The two live in Fuquay-Varina, N.C., but are die-hard Bulls fans. Robert owns a collection of baseball movies, but his favorites are Major League (directed by David S. Ward), For the Love of the Game (directed by Sam Raimi) and, of course, Bull Durham (directed by Ron Shelton). Shelton, who this summer released The Church of Baseball—a book about the making of the film—was not in attendance Friday night.

Robert has seen Bull Durham more than 30 times, he said.

Since they moved to their town (45 minutes south of Durham) nine years ago, the couple has been to five Bull Durham Nights.

Beyond those events, they’ve had their fair share of Bull Durham moments. Once, after visiting a pickle festival in the Warehouse District, they walked outside and noticed they were next to the Durham Athletic Park outfield (the historic stadium where the team used to play, and where Bull Durham takes place). Robert got giddy and began taking pictures of the field. When he walked into the stadium, a groundskeeper stopped him.

“‘Oh, I’m sorry. I just figured out where I was. I had to take some pictures of it,’” Robert recalled. The groundskeeper nodded for him to go on inside. “Then I go, ‘Man, is this heaven?’ He goes, ‘Wrong Costner movie.’”

Inside the stadium, scores of people carried bags with green T-shirts and hats from the team store. Mascot Wool E. Bull made the rounds taking pictures with fans, some wearing “Lollygagger” T-shirts — another movie reference. Some recited their favorite lines from the film.

“‘It’s a very simple game. You throw the ball. You catch the ball. You hit the ball. Sometimes you win, sometimes you lose, sometimes it rains,’” said fan Steve Force as he waited in line to order food with his girlfriend and their friends. (He was quoting  Nuke in the movie’s closing scene.)

Nearby, standing at an outdoor beer kiosk as Crash, Nuke and Annie mascots raced around the diamond, was Jeremy Trantham. He moved to Durham in 2010, when he was in his early twenties, and has been a Bulls fan ever since. He even used to attend the Bulls’ special game at Durham Athletic Park, played annually in honor of their old home. Since he moved to the city, he’s seen the team and town grow a lot.

“The old stadium has a very small intimate feel — kind of like the minor league baseball I grew up in my hometown,” said Trantham, who works in digital marketing. “I don’t think there’s an Annie Savoy in this stadium right now or [someone] that could access the players in the way that they did in the movie because it’s a different level of baseball.”

In 1995, the team moved from the old ballpark to its new stadium next to the American Tobacco campus.

Three years later, the team went from Single-A, one of Minor League Baseball’s lower levels, to Triple-A, the stage just below the majors. By the early 2000s, Durham had grown its reputation beyond being the hometown of the American Tobacco Company and Duke University, becoming a tech and innovation hot spot. Companies such as Bronto Software (now owned by Oracle Corporation) and Burt’s Bees opened headquarters on the American Tobacco Campus.

All the while, the Durham Bulls’ brand was exploding too. Twenty-nine years ago, five years after Bull Durham’s premiere,  Minor League Baseball began releasing a list of the 25 teams that sell the most merchandise. The Bulls are the only team to make every list (the last of which was published in 2020).

Events such as Bull Durham Night also attract crowds larger than the team’s typical game. Last Friday’s contest drew 8,513 people. The average turnout in 2019 — the year before the pandemic — was 7,668.

On Friday evening, when the Durham players batted, their jerseys and caps on the stat screen on the Blue Monster — the left-field wall —  featured the Shower Shoes logo (courtesy of photoshop). At one point during the game, a song from the movie, Bill Haley & His Comets’ 1955 single, “Rock Around the Clock,” blared throughout the stadium. Later, a baseball movie trivia game played on the screen, and showcased Durham players and fans in pre-recorded videos answering questions. 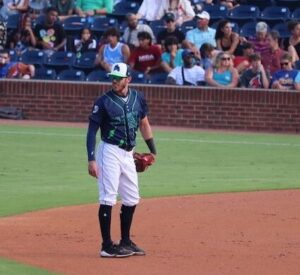 As the baby-blue sky turned pink and orange, and the sun disappeared below the high rise buildings behind the outfield, fans sang along with Jatovi McDuffie, the Bulls’ on-field announcer. He led the crowd in Neil Diamond’s “Sweet Caroline” and Bon Jovi’s “Living on a Prayer.”

In the first inning, Norfolk jumped to a 3-1 lead. But Bulls starter Kevin Herget emulated Nuke’s “million-dollar arm” across his next four innings — allowing just those three earned runs. Twilight turned to dusk in the sixth inning and the home team took a 6-3 lead, and fans began to clap to distract Norfolk’s hitters.

“This fan base, they’re very involved with what’s going on in the game itself, which makes it more fun to pitch in,” said Herget, who came to the Bulls this season. He says he has found similarities between the team in the movie and the real-life club, even 34 years after its release. “It’s [Bull Durham] probably one of the most accurate [baseball movies] in how things work — how real, where a lot of the others are very fictional.”

Four more pitchers followed Herget in the final four innings. None allowed any runs. After the Bulls closed out the Tides in the ninth, the bull snorted, wagged its tail and glowed its eyes red. Fireworks soon lit up the dark downtown Durham sky. Seabrease got her wish.

Above: Robert and Teresa Shell enjoy the Durham Bulls’ annual Bull Durham Night., wearing jerseys with the names of two of the movie’s characters. Robert has seen the movie more than 30 times. The theme of this particular Bull Durham Night was “Shower Shoes,” in honor of a scene from the movie. Fungus-laden shower shoes were featured on the Bulls’ caps and jerseys. Photos by Ana Young–The 9th Street Journal

More from SportsMore posts in Sports »