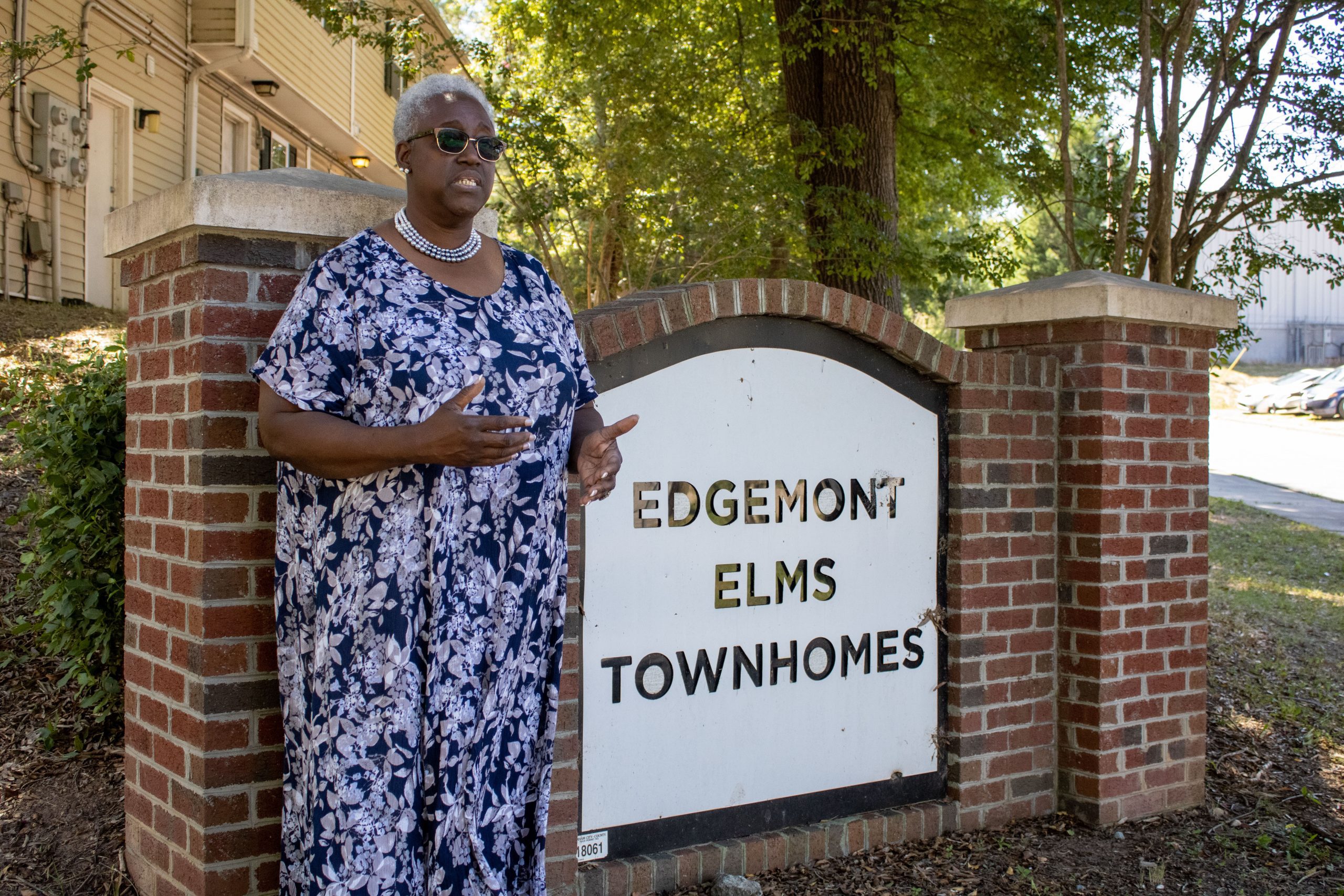 As mayoral candidate Charlitta Burruss showed us around her neighborhood, Edgemont Elms, she stopped at the road in front of her house and pointed to the ground where bullet shells had strewn the street the night before.

“I picked up 15 shells from this parking lot,” said Burruss, shaking her head.

Having served on the resident councils of several Durham Housing Authority communities – she previously lived in Calvert Place – Burruss is familiar with the gun violence and affordable housing crises facing the city.

Through her campaign, Burruss hopes to encourage others from low-income neighborhoods to run for political office. She said people like her, who have relationships with residents of Durham’s often-overlooked communities, have an important perspective to share.

“We don’t consider people who are actually boots on the ground, that are actually in the community and making a big impact,” Burruss told the 9th Street Journal.

In June this year, after hearing gunfire every night from her home in Edgemont Elms, Burruss organized a community barbecue, inviting district police and local families to spend time together and build relationships. In addition to her resident council responsibilities, Burruss is a member of the Residential Advisory Board of DHA and chairperson for the Consumer Family Advisory Committee of Durham.

In 2018, she received a Neighborhood Spotlight Award for her community outreach effort in Durham, which included organizing food and toy donations and community events.

This campaign marks Burruss’s fourth attempt at running for political office in North Carolina. She was a candidate for mayor of Monroe in 2007; town council in Marshville in 2011; and city council in Durham in 2019, receiving 1,258 votes.

Born in Washington, D.C., in 1959, Burruss comes from a family of preachers. After working many different jobs to support her son, Burruss decided to pursue higher education in her late 40’s, receiving an associate’s degree in Human Services from South Piedmont Community College in 2004 and a Bachelor of Sciences in social work from Gardner-Webb University in 2006.

Though she has never held a political office, Burruss is an experienced community leader; she said her roots in the community give her an advantage over other candidates. For example, Burruss has become frustrated by what sees as broken communication channels between DHA residents and local government officials. In her experience, the local government makes a dangerous presumption that all DHA residents have access to  computers and internet required to find information about affordable housing and employment opportunities.

“Durham officials don’t realize not everybody can afford internet access, and older people are not using computers,” said Burruss.

Alternative methods of communication, such as electronic billboards and posters containing updates from the local government, could be a better way to reach those without internet access, she said.

Patching the communication gaps between low-income residents and the Durham mayor’s office, Burruss said, is a vital prerequisite to addressing the issues she is most passionate about — crime, affordable housing, and employment.

Addressing crime and poverty would be Burruss’s main priority as mayor. She believes investment in education and parental support in communities with high crime rates can help break this cycle.

Burruss does not support defunding the police in Durham. Rather, she believes police officers should be retrained to better communicate with residents and those with mental health conditions. She also supports paying police officers more so they don’t leave to find work in counties offering higher salaries.

She says her experience as a liaison between local residents, police, and the Housing Authority positions her well to improve city relations as mayor. If elected, Burruss plans to spend time in Durham, speaking to people “on the ground” to inform her policy decisions.

“If I were in the mayor’s chair, you’d be able to put your hands on me,” said Burruss.