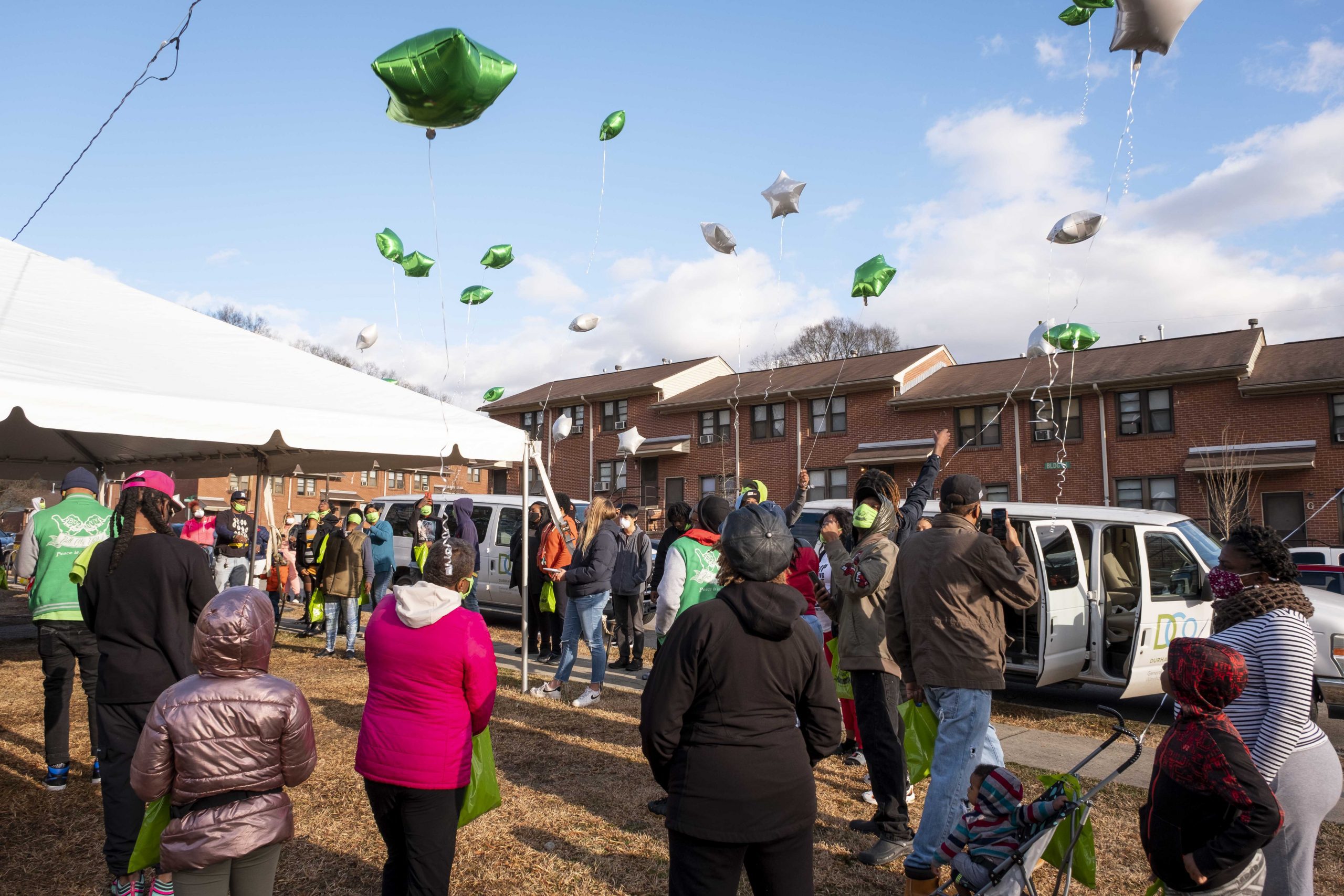 On Sunday, men and women in bright green baseball jackets and fluorescent yellow masks took possession of a corner of McDougald Terrace where several shootings have occurred over the last five years.

While the Bull City United members finished setting up, people who live nearby and supporters from other neighborhoods rolled in, by foot and in cars. Joyful songs like “Before I Let Go” by Frankie Beverly and Maze played from speakers as people greeted one another.

A street outreach program founded in 2015, Bull City United, tries to reduce gang and gun violence by framing it as a contagious disease that can be treated and prevented. The group’s strategy involves detecting and interrupting conflicts, identifying and treating high risk individuals and changing social norms.

Many team members come from Durham neighborhoods where this violence is most common. They hosted seven vigils across Durham last week to honor the Week of Peace. The vigils remember people lost to gun and gang-related violence and work to spark hope that things can and will change.

Durham experienced a surge of gun violence last year. From Oct.1, 2019 to Sept. 30, 2020, the number of people shot in Durham soared 59% to 221 people, according to police data. One out of every six gunshot victims in Durham during that time was younger than under 18, including eight children younger than 12.

On Sunday, David Johnson, a Bull City United supervisor, welcomed attendees as they arrived, most of whom he knew by name. Once more than 20 people gathered, Johnson took a mic and addressed the crowd.

“We are out here trying to show our love and support,” he said, adding how grateful he and the United team is for people joining them to seek change. “Y’all have shown us nothing but love.”

Johnson introduced  Keshia Gray, United’s outreach coordinator, who knows the McDougald community because some of her family lives there. “It sure is good to be home, y’all,” she said. “But one thing that is getting up out of here is gun violence.”

Determined whoops and “Yes Ma’ams!” escaped from the crowd.

Bull City United has not been as visible in recent months as it was after launching in 2015. Gray said it is growing now, pointing to Ty Robinson, a young man in the process of becoming a conflict mediator. She knew Robinson originally as a person at risk of being exposed to violence, she said.

Gray invited any mothers who lost children to violence to speak. Mothers were there, but none stepped forward.

Gray then read names of people killed by gang and gun violence in Durham in 2020. DaShawn Jones was on the list. So were Benjamin Smith, Terry Bradshaw and Kordell Young. Gray choked up shortly after naming Young, who was fatally shot on March 20 last year.

“He was one of our own,” Gray said, noting Young was active in Bull City United.

Once 40 names were read, the mix of families with young children, young and older men and women, and quiet, bereaved mothers shared a moment of silence.

Ashley Canady, president of McDougald’s resident council, walked to the center of the group and started singing “Hero,” by Mariah Carey. The lyrics fit with the push to encourage community members to work together to reduce violence. “When you feel like hope is gone, look inside you and be strong, and you’ll finally see the truth, that a hero lies in you,” she sang.

As Canady continued, United team members in the green baseball jackets passed around white and green star-shaped balloons, another tribute to people lost last year. Everyone released the balloons together. A wave of quiet passed through the crowd as they watched the balloons rise to the sky.

“Peace is a lifestyle,” said Gray, back on the mic. The people surrounding echoed the words back to her.

Tammy Goodman was one of the mothers present who did not address the crowd. She wore an orange sweatshirt with a photo of her son, Charleston Goodman, on the back.

Three years ago, 26-year-old Charleston Goodman was kidnapped outside of his home in East Woodcroft Parkway on Sunday January 28th, she said. He has not been found. In August 2019, his nine-year-old godson, Z’yon Person, was shot and killed in a drive-by shooting.

Sundays are difficult for Goodman and her family, she said before Sunday’s event began. And vigils are bittersweet.

Even if she doesn’t speak, showing up to advocate against violence gives her motivation to get out of bed each morning, Goodman said. In late 2020, Goodman co-founded Guns Down, Hearts Up, an anti-violence group focused on raising awareness of gun violence and advocating for more political investment in the problem.

“I’m turning pain into purpose,” said Goodman. “I know the pain would consume me if I wasn’t doing this.”

9th Street reporter Olivia Olsher can be reached at olivia.olsher@duke.edu

At top: Balloons rise from a violence-prevention vigil that members of Bull City United organized at McDougald Terrace last week. The star-shaped balloons were released to remember 40 people killed by gang- and gun-related violence in Durham in 2020. Photo by Sho Hatakeyama

CORRECTION: This story has been updated to correct the date when Charleston Goodman was kidnapped.