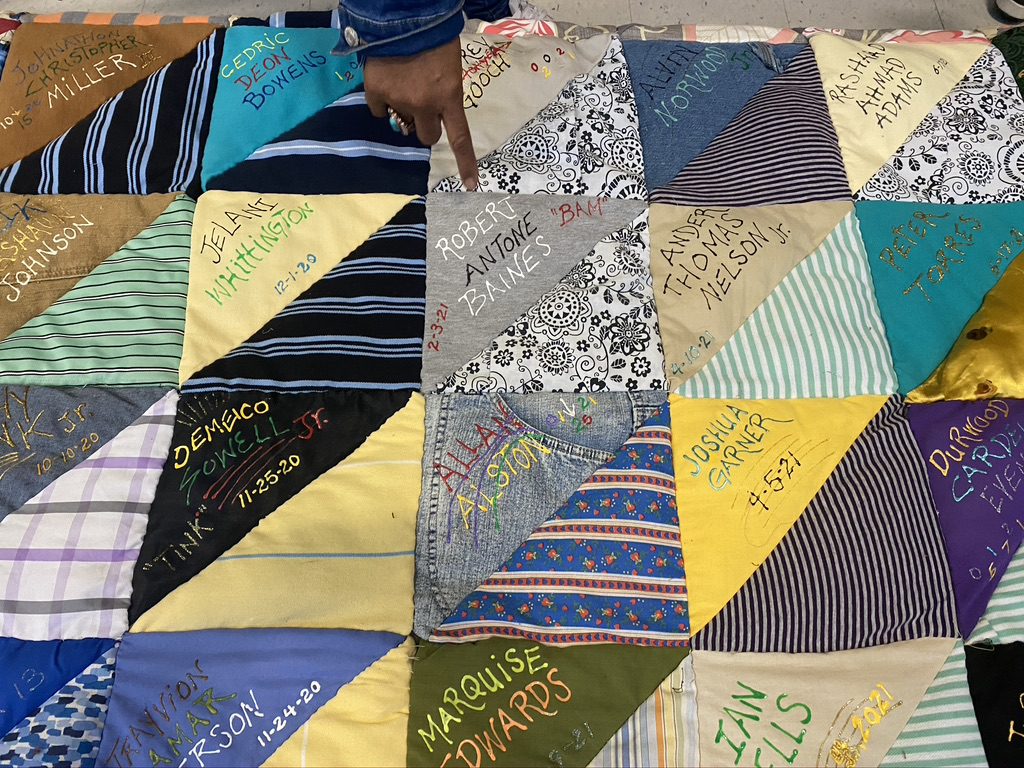 The trouble started when Hillside High School student Logan Lewis hopped off the stage and into the audience wielding a fake handgun.

Gunshots sounded, and a student actor on stage crumpled to the floor, dropping another fake handgun. The victim’s friend picked up the gun and chased Lewis to his home where he pounded his fists on the door, screaming for his mother. More gunshots rang out, and Lewis’ mother opened the door to find her son dead on her doorstep.

In the blink of an eye, the fictional community became a crime scene: Yellow tape wrapped around the porch and desperate sobs from huddled family members pierced the air, echoed by sniffles from the audience.

It was all made up, an emotional scene toward the end of Hillside’s production of an original play “State of Urgency.”

But the play also reflects actual events. “State of Urgency” originated as a response to Durham’s worsening gun violence problem. It also draws upon the real-life experiences of Hillside students, linking the experience of street violence with classroom struggles.

The play was performed three times over the weekend of November 14-16, and discussions are underway about presenting the play to other school audiences around Durham in the future.

“I got emotional at times,” Lowe said. “It’s really the nicest people to go through the worst things…They’re speaking about it to you and you’re just like, ‘Oh my God, this happened to you and I didn’t even know’.”

The play—the school’s first in-person production since the pandemic began—featured powerful monologues drawn from students’ personal experiences, as well as moving original songs and dance numbers. It addressed a range of issues, from colorism and school bullying to police brutality and Black-on-Black violence, forming a collage of the harsh realities feeding the growth of gun violence in Durham.

A call to action

Act One of “State of Urgency” opens with a flurry of emotions: Students, all wearing t-shirts with taglines such as “Hands Up, Don’t Shoot” yell out desires for peace, safety and mental health support. The voices crescendo into a collective question, perhaps pointed at the police, the government, the adults in the room, or all three: “Where are you?”

It is the first of many appeals to the audience.

The play’s action takes place on a city block, with a corner store, community recreation center and living quarters.

The audience first sees the block as it was in 1979: unified, safe and lively. Things quickly deteriorate as flashing lights and eerie music bring us into the present, where the block feels isolated and unsafe.

Scenes of police brutality follow, along with scenes of school strife, where colorism and materialism lead to bullying and exclusion.

Act Two opens with the students wandering the block, lamenting the violence they are living through.

The scenes that follow look beyond the world of high school, including a depiction of a traffic stop gone fatally awry. A traffic officer mistakes a man’s phone for a gun and shoots the man as passersby capture the tragic death on camera. The stage sweeps into a Black Lives Matter protest, with students hoisting signs and chanting.

The play also spotlights intergenerational debates over police reform and the value of protesting.

“Preserve the good and weed out the bad,” the cast says in unison, summarizing the debate.

The play wraps up with the students returning to the stage and imploring the audience to look within and be the change they want to see.

“This was a call to action,” Oral Chinfloo, a Hillside parent said after the performance. “I hope people reflect on what they just witnessed.”

The play pays homage to civil rights leaders of the past, such as Martin Luther King Jr. and Nelson Mandela.

Outside the theater, Tabb also highlighted local activism. In the building’s foyer, organizations such as Bull City United and Guns Down Hearts Up set up tables devoted to their work against gun violence. The Durham Homicide Memorial Quilt stretched along the foyer, holding over 800 names, each written on a cloth square. One square held the name of Robert Antone Baines, who was fatally shot in February 2021. His mother, Brenda Young, stood quietly nearby.

Before the play began, Tabb welcomed Young to the stage. Young shared how senseless violence took the lives of three of her family members. She begged members of the audience to help end local gun violence.

“I grieve every day,” Young said. “Don’t wait ’til it hits you… You do not want to go through this pain.”

Tabb then asked any victims of gun violence in the audience to stand. Six people rose.

After the play, as students greeted their families outside the theater for congratulatory hugs, a few people congregated around the memorial quilt. Young stood over the quilt, looking at the square with her son’s name on it. Closer to the middle of the quilt,  a young dancer wept quietly over another cloth square.

“Even though this is make-believe for us in terms of theater, this is not make-believe in real life,” Tabb said in an interview afterward. “It’s not a game. And as a community, we can’t treat it as a game.”

Above, Brenda Young points to her son’s name on the Durham Homicide Memorial Quilt, on display at Hillside High School during the production of ‘State of Urgency’. Photo by Olivia Olsher – The 9th Street Journal