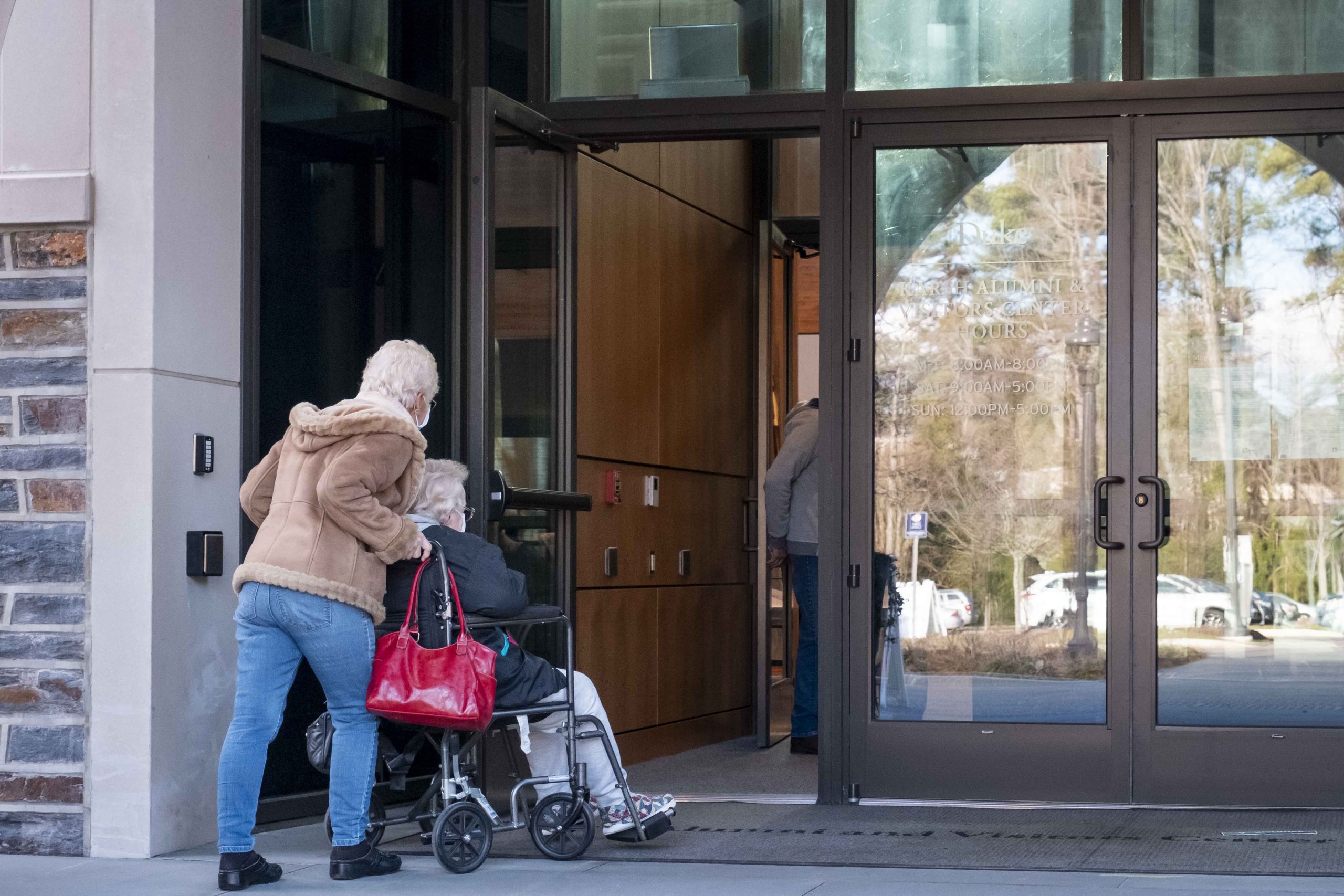 By Rebecca Schneid
and Dryden Quigley

County officials intend to begin scheduling new appointments by the end of February, but are unsure of an exact date. An unspecified number of people will be required to delay existing  appointments. But officials say that will be a small number and delays won’t exceed five days.

People with dates on the books, including spots for second doses, will get vaccinated, health officials stressed.

“Durham County has a baseline allocation of 600 first doses for the next three weeks, and we are uncertain when our allocation will increase. It is best to halt scheduling until we are confident we will be able to fulfill additional appointments,” Public Health Director Rodney Jenkins said in a press release.

People lucky enough to have appointments did get shots this week. That was evident Friday, as people complied with health precautions to gain entry to the county Department of Public Health vaccination site on East Main Street.

Visitors were screened in the parking lot by answering a few questions and then were handed tickets from staff members that allowed them to enter the building.

After getting dose number one, Durham resident Juan Santiago said he was “very relieved.” He also landed an appointment for a return dose two, in three weeks, he said.

Before climbing into an Uber, Santiago stressed he does not plan to stop wearing a mask or stop staying mostly at home.

This vaccine shortage is not unique to Durham. All over the state, distribution sites have exhausted their resources, state officials say. On Tuesday, state Department of Health and Human Services Secretary Mandy Cohen released a letter explaining that federal allotment of vaccines to North Carolina dropped from 260,000 to 120,000 this past week.

The federal government is incentivizing states to use all of allotted vaccines, Cohen said, noting that states with large unused vaccination supplies could receive reduced quantities. In response, vaccination providers worked especially hard this past week to clear the states’ backlog of vaccines, she said.

As of Tuesday, North Carolina had distributed 95 percent of its first doses. The recent success pushed North Carolina from 40th to 22nd place on a Center for Disease Control and Prevention ranking on how many first doses states administer.

Durham early this week announced plans to open a mass vaccination site capable of vaccinating 17,000 people weekly. The timeline for the opening of the site was still being determined, officials said.

Health care workers, longterm-care residents and staff, and people aged 65 and older are eligible to receive coronavirus vaccines in North Carolina. Durham County has distributed about 36,000 vaccines so far, according to the NCDHHS.

North Carolina has had over 746,000 confirmed COVID-19 cases with Durham County making up 19,000 of those cases. Durham County has also had 173 deaths attributed to the virus.

There may be a shortage of vaccines in Durham, but there is certainly no shortage of want. Despite demand not meeting supply, eligible Durham residents have been contacting helpline or online services to try to get appointments.

People were also crowdsourcing on social media forums like Reddit and other digital platforms to find out where they could get doses as quickly as possible.  Some traveled if needed to get their shots, including to Granville and Cumberland counties.

At top: One woman wheels another into Karsh Alumni and Visitors Center at Duke University, one of three sites in Durham dispensing coronavirus vaccines this week. Photo by Sho Hatakeyama