Home » The Bull Durham house, then and now 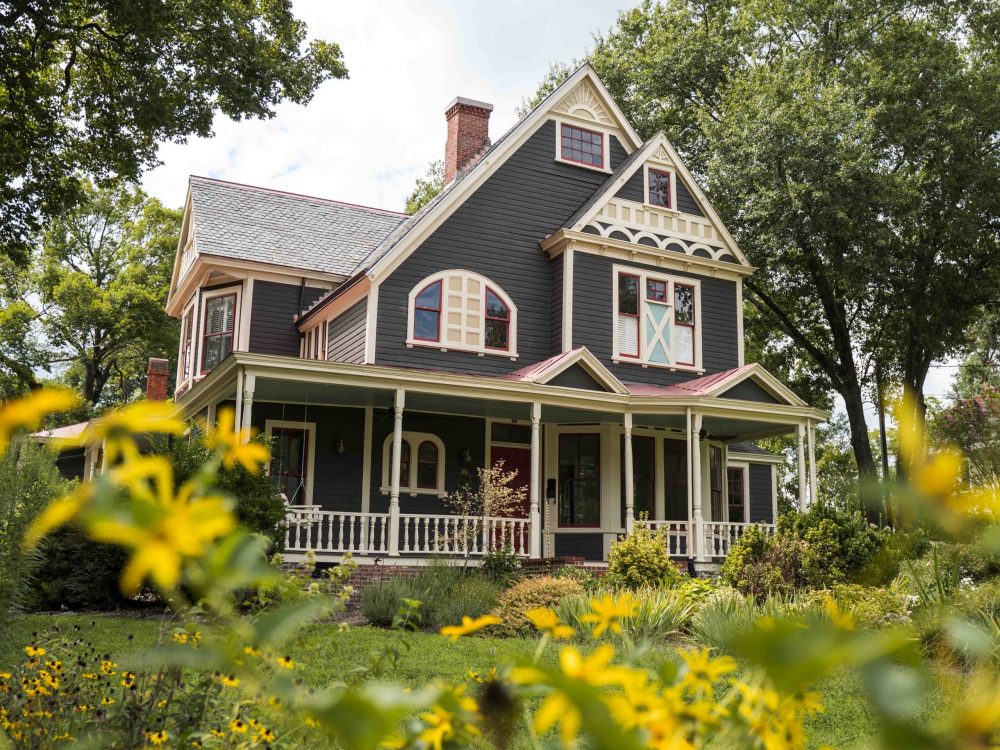 The Bull Durham house, then and now

From the outside, the Bull Durham house at 911 N. Mangum St. looks pretty much the same as it did in the famous 1988 baseball film. The windows are big and a mix of styles, typical of the home’s Queen Anne architecture. A swing still hangs on the front porch.

But inside, there is barely a trace of the erratically wallpapered, chaotically cluttered home where Annie Savoy, played with passion and wisdom by Susan Sarandon, seduced a series of Bulls players, most notably Ebby “Nuke” LaLoosh (Tim Robbins) and Crash Davis (Kevin Costner). Today, the home is transformed into an embodiment of southern minimalism.

The garish wallpaper is gone (understandably) and the walls now display a spectrum of muted pastels. Instead of Annie’s large collection of candles, the home is filled with natural light. It is very southern chic, with plenty of open space, simple colors, and vintage-esque furnishings.

We know these details because the sale of the house is pending (asking price: $1.15 million) and, when it was on the market, it even had its own website, thebulldurhamhouse.com, complete with a virtual tour. Stroll through the house (virtually or in person) and you won’t see many signs of Annie or Crash or Nuke – except for the tub.

“For me, the scene I’ll never forget was the infamous bathtub scene with Annie and Crash,” says Jarin Frederick, the real estate agent selling the home for Urban Durham Realty.

“The clawfoot tub is still in the home today!” says Frederick, referring to the location of one of the most famous moments in the film. The tub scene is all kinds of steamy, with Costner and Sarandon finally consummating their love affair surrounded by dozens of burning candles. They share passionate kisses and the camera pans away as the water splashes out the candles’ flames.

Is the tub now in a different room? It seemed larger in the film, but maybe that’s an optical illusion.  But if you’ve got $1.15 million, who cares? You can recreate this moment of movie magic, even if you have a bit less space for candles.

Even before it was on the big screen, the house, built in 1880, carried an air of celebrity. It has been granted historical status both locally and nationally as the “James S. Manning House.”

Manning was a reputable Durhamite, first as an attorney and judge, later a state senator and eventually as the North Carolina’s attorney general. He remained in the home until 1912 when he resettled in Raleigh. After the Mannings relocated, the house changed families a few times until it eventually became vacant.

That’s how it stood in 1986, when Ron Shelton, a director, screenwriter, and former minor league infielder, saw the house while scouting locations for the film that would eventually become Bull Durham. Shelton has said in interviews that the filmmakers chose Durham because of its minor league team and its skyline of dilapidated tobacco warehouses, which complement the romantic allusions of the movie.

But Bull Durham wasn’t entirely shot in Durham. A batting cage scene was filmed in Garner at what is now a mini-golf course; the bar where Nuke and Crash first meet is in Raleigh; and the baseball diamond where LaLoosh is interviewed about pitching in “the show” was in Arlington, Texas.

The Manning house, though, is less than a mile from the Durham Bulls stadium where the team played in the 1980s and where much of the film was made.

What a difference 30 years (and a little decorating) can make. When Annie lived there, the house was decorated with a seemingly endless collection of tchotchkes: buddhas, goddesses in various forms, and baseball memorabilia. Each room had its own statement wallpaper (usually floral) and the whole place was candlelit by night and sunlit by day.

In a desperate attempt to seduce Nuke during what he thought to be a celibacy-induced winning streak, Annie shouts that she detests cute – she wants to be “exotic and mysterious.” That describes her home, too, a workshop for her new age mysticism.

Today, the home is spacious with four bedrooms and 3.5 bathrooms, a front and back porch as well as an office, family room and living room. In the film, the house was painted a fading mint color. Now, it’s a slate gray, the classic mismatched windows accented with a bright red like the stitches of a baseball. It’s so nice it looks like it’s been on the cover of Southern Living.

Frederick says the owners have taken good care of it. “When you walk through the home you are immediately aware of the love and commitment the  homeowners made the last 13 years in preserving this historic Durham treasure,” she says.

The website highlights a laundry list of restorations and updates since 2007. These range from lighting fixture updates to larger renovations, like the addition of a garage and workspace in the backyard and the refurbishment of the front porch where Crash awaited Annie’s return from the ballpark in the film’s last scene.

Annie joins him on the porch, and the two sit under cover as rain comes down around them. She rambles about the non-linearity of baseball and Crash kindly tells her to shut up. Eventually the two move inside. Much is left unsaid as they dance in front of Annie’s shrine to the religion of baseball.

Staff writer Carmela Guaglianone can be reached at carmela.guaglianone@duke.edu

At top, photo of the Bull Durham house by Henry Haggart | The 9th Street Journal