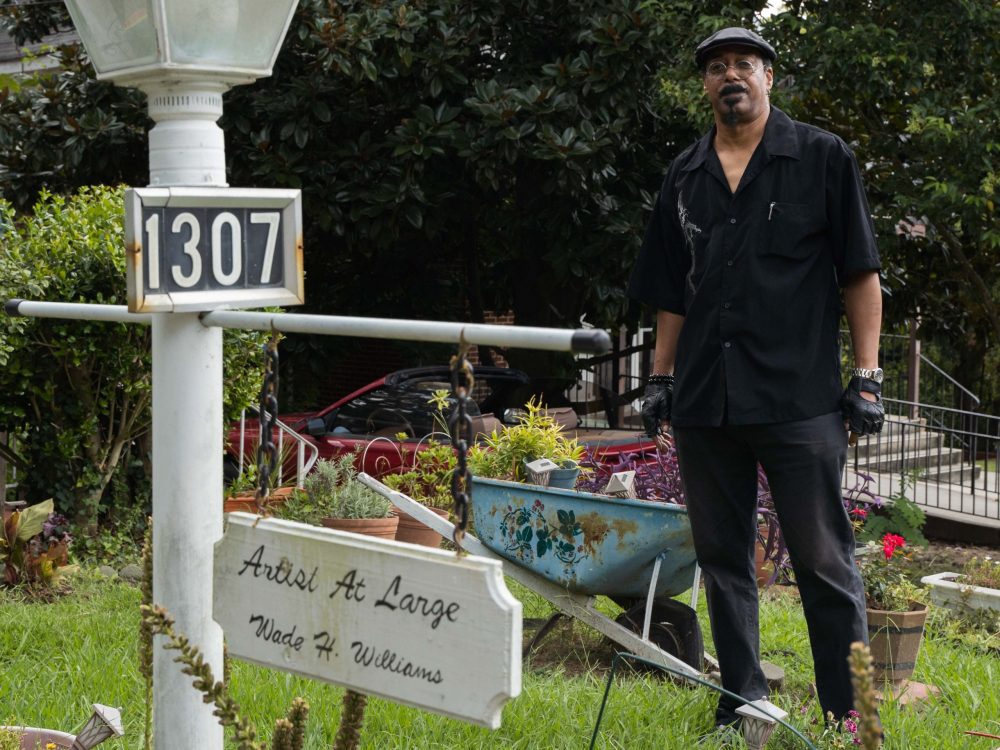 By Carmela Guaglianone on September 13, 2020

“VA 2-211-685” is scrawled in black marker across a sheet of paper. Wade H. Williams, artist at his own company Artist at Large, holds up his handiwork to his computer cam. He is sitting in his studio, with a charcoal portrait he’s just finished in the background. He wears large round glasses and a silver earring dangles from his left ear. Above his lip a handlebar mustache is expertly curled at each corner.

The string of letters and numbers he’s holding up over our Zoom call is the copyright registration number of his painting in downtown Durham, created when Black artists showed their opposition to police violence with an extraordinary collection of murals. The painting, called “Lady Justice/ Black Lives Matter,” depicts a Black Lady Justice wearing a white blindfold and holding the scales of justice. It can be seen on West Chapel Hill Street at Five Points downtown.

It was opportunistic protest art. “Lady Justice” is one of many works along Main Street and West Chapel Hill Street after local businesses boarded their windows with plywood in response to Durham’s Black Lives Matter protests in June. The wood provided a canvas for Black artists to make statements about racism and the BLM movement.

Williams has much experience with public art, but this hit particularly close to home. His art has highlighted issues of race for many years.

“I try to give food for thought on the African Diaspora,” he says of his work, which has been displayed across the world, from New York to Philadelphia to Belize.

Williams was born in Duke Hospital in 1950. He graduated from Hillside High School in 1968 and majored in Fine Arts at St. Augustine’s University in Raleigh. He spent the next 10 years at the Art Students’ League of New York. He studied drawing, oil painting and artistic anatomy (important fundamentals for an artist who cites French Impressionists and Renaissance masters as his influences.)

In 1989, he decided he was on his way to becoming a professional student — a fate he wanted to avoid — so he sold his studio in New York and moved to an island called Caye Caulker, 45 minutes from Belize City via water taxi.

“The idea was to unlearn everything I had learned in school,” Williams says. “You want to come out with your own style, your own thing.”

He went on to hone his style as an artist and educator in Philadelphia, and eventually he returned to Durham in 2006 to help care for his mother and grandmother. He is now a member of the Public Art Committee of the Durham Cultural Advisory Board, a contributor to the Durham Civil Rights Mural Project, and competitor in the Durham Arts Guild 66th Annual Juried Exhibition.

Willie Bigelow, art curator of the Hayti Heritage Museum in Durham, is a fan of his work and included Williams in the museum’s annual Black History Month Exhibition. Bigelow suggests teachers use his work to educate their art students. “It’s got an European-African flare,” he says. ”It’s superb.”

When I ask Williams about the mural downtown, he stands to find a print to hold up. This is just one of the many times throughout our interview when he will stop for a moment to find a relevant passage to read or show a painting he’s just mentioned.

“I’ve been an activist in a quiet way, in my own way,” he says. “Either I’d show it through my art or when I was younger I would march or boycott.”

When attending college, he became a member of the Black social fellowship Groove Phi Groove, which continues to do public service around the Triangle. The group’s colors are black and white — just like the Black Lives Matter movement, Williams points out. The Groove Brothers provided water, food, and masks to Black Lives Matter demonstrations and recently raised money to donate masks and gloves to Durham neighborhoods with fewer resources.

“At the age I am now I really can’t go out in the street and walk those miles, but I support them,” Williams says of the protesters. That’s why he created “Lady Justice/Black Lives Matter.”

“Someone brought it to my attention that they were doing murals, and naturally I wanted to be a part of that,” he says. He searches through his desk to find a picture of “Weeds Habitat,”  his first mural, painted in New Rochelle, New York, which shows leaves and rainforest painted in shades of green and blue. Since then, he has often used murals to bring art to a wide audience.

“In every part of Philadelphia there’s a mural with my name on it,” Williams says of his time there, where he was assigned to “areas that angels would not go.” He tried to portray himself as a role model to the students he worked with. His low-key style has earned respect.

“He is quiet, but when he has something to say, people really listen to him because he’s not busy taking up a lot of space, which can happen in group dynamics,” says Brenda Miller Holmes, an artist and public arts consultant in Durham.

The two met when Miller Holmes was organizing the Durham Civil Rights Mural Project in 2013. She knew right away that she wanted to include Williams and now considers him a friend.

“He creates art that’s pushing against when it’s necessary. He also creates a lot of artwork that’s about beauty and culture and what you want to build and hope for the future,” she says.

Even when he’s not working directly with students, Williams tries to educate through his art.

“What I’ve been doing lately is trying to express how Black people live, how they have fun, and I do that to combat some of these stereotypical thoughts people have of people of color,” Williams says.

He pulls up “An Unquiet Moment,” a recent piece of a Black man sitting solemnly with a french horn. Yellow flowers sit in a vase on a vanity, and light shines through the room from an unseen window.

Another piece he shares shows Miles Davis trumpetting on a bright day. He is a collage of a french railway map in a landscape of watercolor. On his face is joy and from his horn there is music.

“Some kid may see that and wonder who that is, what’s that about and they may not have known the struggles or the things people before us went through to get to that position,” he says.

In a different painting, an operating table is center stage and a Black operating staff is working to finish a procedure. The image is stark with dark colors save the contrasts of white uniforms; the team is solemn and focused under their masks. Behind them is a small window. Outside, the sun shines.

“I don’t think of him as an activist, he’s more of a reporter, and he uses his art to do it,” says Bigelow, the Hayti museum curator. “He uses his art to relate what he sees is happening around the community. He’s like a newscaster: here’s what I see, here it is.”

Williams wants his next project to highlight the Tuskegee Airmen, but he is early in the research, not yet sure how it will take shape. He also is keeping in mind a large basket of vegetables his neighbor brought over recently. He was stunned by the beauty of the vegetables and photographed them so he could paint them later.

“I want to tell a story of all the positive things my people have done, that’s one way of defunking the socialization of a people,” Williams says. “Knowledge is king, knowing your history is king.”

Above photo of Wade Williams by Henry Haggart, The 9th Street Journal