Home » At Bull City Magic, ‘the soul goal’ and a vision of a brighter future 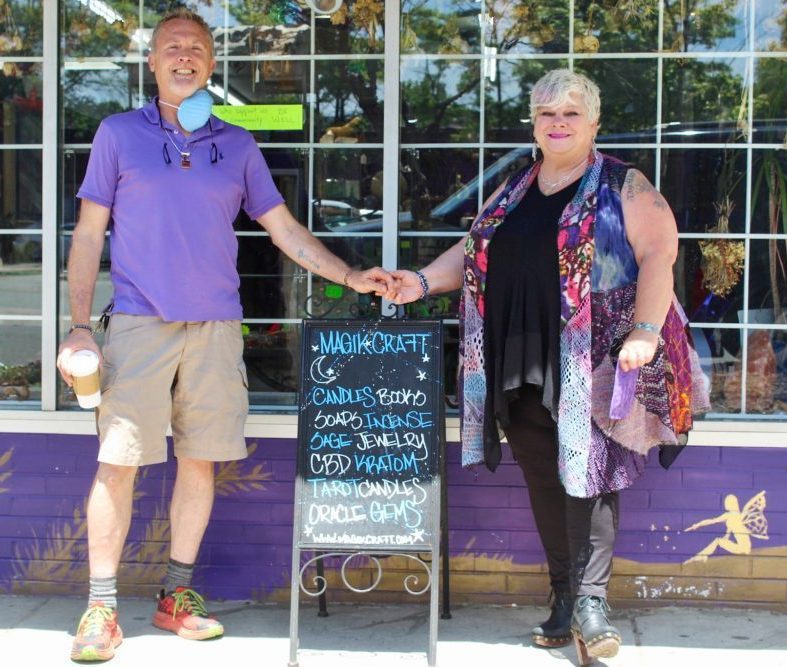 At Bull City Magic, ‘the soul goal’ and a vision of a brighter future

“We’re not like a regular store,” Lynn Swain says, holding a smoking bundle of sage over the flame of one of her shop’s locally sourced vegan candles.

Tom Swain, her husband and business partner, nods. “We want everyone to feel better when they walk through that door.”

The door he is referring to opens into the mystical expanse of MagikCraft: Bull City Magic, a metaphysical shop and spiritual safe space just off of 9th Street. The store is owned and operated by the Swains, and its mission is what they call “the soul goal.”

In what has come to be known as “this uncertain time,” they provide insight, positivity, and a bit of magic to Durham.

The store is her headquarters as a clairvoyant, a service more pertinent than ever. With our routines and physical lives so starkly interrupted, today is on hold, making questions of tomorrow more pressing. It’s a perfect time to ponder the future. Lynn, a healer, psychic, and medium who also goes by the name MagikCraft, says she has a powerful relationship with energy and the (supposedly) unknown. She reads people and receives messages from the universe, often using crystals or cards as guiding tools.

These days she is talking with clients over the phone or other virtual platforms, and it’s not just the mode of communication that has changed. She says that many of the inquiries she has received lately have related more to clients’ personal journey and reflection than ever before. That’s an encouraging trend, she believes. Working parents are spending more time with their children, relationships are being reassessed, and careers and passions are being critically evaluated. The shutdown has “put the brakes on, stop and look and listen.” she says.

In a politically polarized time, the store is focused on offering a safe space to any and all who need it. “We don’t talk about politics here,” Tom says. “It’s not about what you are politically, it’s about your soul,” Lynn adds.

Eye-catching merchandise lines the walls and fills the glass display cases: crystals from every corner of the world—including one from the highest elevation of Tibet—countless tarot decks, lavender soaps, books on destiny or tarot reading, and cast-iron cauldrons. She says 80% of the mystical merchandise is by customer request, from over 40 local vendors.

Even during a time of social distance, everyone receives a warm (but safe) welcome. This comes in many forms; sometimes it’s Lynn walking a customer around the store on FaceTime to put in a virtual order, other times it’s Tom, who was not “blessed with gifts” of psychic and medium knowledge like his wife and co-operator, but is known for pulling out a book that offers a look at a customer’s destiny based on their birthday and sharing a page or two with them.

Bull City Magic hosts a range of 32 workshops – from monthly Full Moon Gatherings to Crystal Grid training. Stay-at-home restrictions have moved many of these events to the store’s new YouTube page, but the storefront remains very much in business; after a call to City Hall describing the value of their apothecary inventory and soaps, Lynn said Durham has said they could stay open.

“We don’t want to just sell stuff,” says Tom, “we want to educate.”

The couple has been in this space for almost three years, underneath Cosmic Cantina (the enchanted names of the two businesses bear no relation, but there is certainly a bit of Bull City magic in Cosmic’s bean burritos). Before moving to this location, the Swains worked out of a nearby office space to build clientele.

“You don’t just open a metaphysical shop in the belt of Christianity without testing the waters, ” says Lynn. She has discovered that “Durham is a very mystic space,” but people like to keep that  “on the D.L.”

Given the name MagikCraft by the universe, Lynn is a seventh generation medium and psychic; the store’s website boasts that by 2019, she had read over 30,000 people. Her many skills are are listed there:

She became a medium at age 4 and began reading people at age 13.

Besides being a guru of the metaphysical, she is a savvy businesswoman. At the age of 57, her resume includes a degree in mathematics from the University of Delaware and more than 30 years in corporate finance.

Even in her years in the corporate world, Lynn worked internationally as a reader and healer. It finally became her full time profession when the newlyweds decided to open the shop in 2017. At the start, Tom, who worked previously as an electrician, manned the store during the week while Lynn continued her corporate work. She would then spend time in the store at night and on weekends, working more than 100 hours some weeks. Soon, though, she came to an important conclusion.

“I realized everything I was saying to my clients I wasn’t doing,” she says.

This was a part of her process of “walking through the portal of fear,” advice she gives clients struggling to commit to their passions or confront the things holding them back spiritually.

She is now fulfilled — though never finished. “I was blessed by being an insomniac,” she laughs. During the coronavirus slowdown, she and Tom are working on an herb wall, making more services available online, and they are collaborating with a Duke alum on a podcast.

They opened a second location to host magical meet-ups: a Kava, espresso, crystal, and sage cafe between Durham and Hillsborough called Magic on 70. The cafe boasts coffee flavors with mystical namesakes, such as “Thoth: God of the Written Word.” Just as one might expect, this carries notes of “Vanilla, Dark Chocolate and Cranberries.”

But alas, the website informs customers that for “the health and safety of our magical tribe,” the new shop is closed temporarily, although spiritual sessions are still available through virtual appointment with Lynn.

Like all of us, they are learning to adapt.

Lynn wears a purple mask around the store, and it nicely accents the lavender walls and the 700 pounds of amethyst crystal near the tarot cards. The store sells masks like hers in a variety of colors.

“Mother Earth has put us in timeout and we need to self reflect,” Lynn says. She doesn’t expect things to ever return to “normal,” but feels this forced re-evaluation has some positive and powerful elements. She is hopeful for the future, a reassuring thing to hear from a psychic.

People are taking this time to explore their  spiritual realm, whatever that realm maybe, which she says is “a human reset on a core level.”

She smiles. “Positive energy is contagious.”

Above, Tom and Lynn outside of Bull City Magic. Photo by Carmela Guaglianone | The 9th Street Journal