Home » A Durham moment: ‘Ain’t nobody gonna save us but us!’ 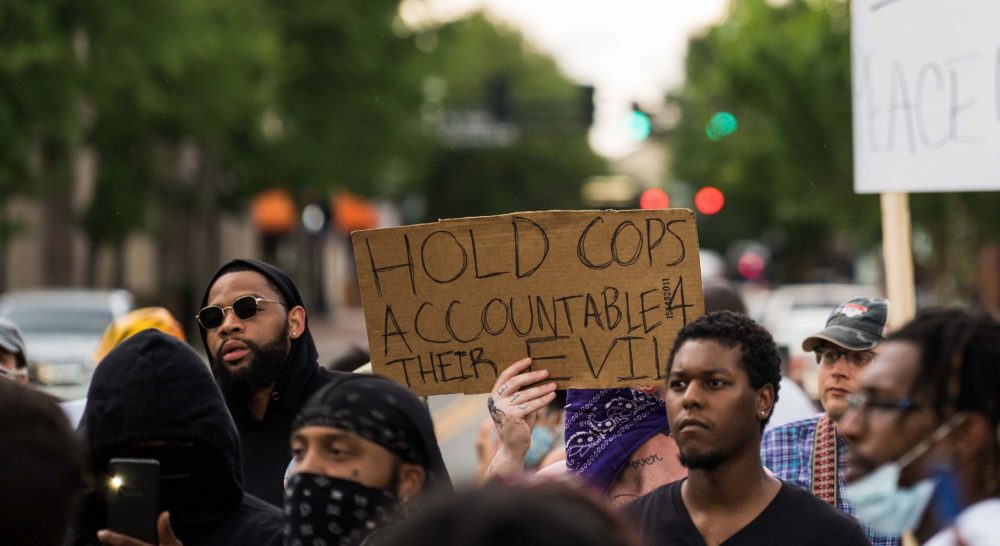 A Durham moment: ‘Ain’t nobody gonna save us but us!’

An American flag flails halfheartedly beside the demonstration in downtown Durham. A Pan-African flag — larger and catching more gusts of wind — is paraded through the crowd.

In the heart of downtown, where Main Street meets Morris Street meets Chapel Hill Boulevard, Durhamites have gathered in solidarity with Black Lives Matter protests sweeping the nation. Under a gray sky, they wear masks and hold signs. The air is ripe with electricity and anticipation, like we are on the brink of a storm.

Another sign simply says, “GEORGE FLOYD,” potent with a power that has mobilized millions.

Beside the woman holding this sign, a fellow protestor holds a piece of cardboard. In Sharpie, it begs the question that has brought so many people from the virus-protected safety of their homes out to this demonstration and others like it.

“Are me and my family next?”

They’re here because they saw it on social media – first the horrific video of Floyd being pinned under a police officer’s knee while he gasped “I can’t breathe!”, and then the call to action for protesters, which spread quickly through Twitter, Facebook and Instagram.

One participant mentions that she saw a post online about protests in Raleigh on Monday, which she also plans to attend. As she says this, someone sitting nearby asks for logistical details.

The protest has no agenda, so people in the crowd just speak up.

“Ain’t nobody gonna save us but us!” shouts one woman, standing in the center of the demonstration. Others circle around to listen as she calls for community action, for holding each other accountable, and for getting out the vote.

“We didn’t fight each other, we fought for each other,” she says. The crowd echoes her passion, chanting “No justice, no peace.”

More protestors take their turns sharing stories and making short speeches. On the outskirts of the crowd, an older gentleman wearing a blue plaid sportcoat adorned with a “F— Trump ” button, is offering everyone squirts of hand sanitizer.

Beyond frustration though, many in the crowd are angry.

“F— the police,” rings out occasionally from the protestors as cops on motorcycles loudly circle on neighboring streets.

Talking through his mask — blue, with the word “Democrat” patterned across it— Jan Cromartie, who mentions that he is a candidate for the Durham Soil and Water Conservation District, says he appreciates the way the community has organized to support the movement, but hopes to see grander, institutional changes as a result.

“Rhetoric is good,” he says, “but I believe in action.”

Droplets of rain start to fall as the protest continues into the evening.

In photo at top, demonstrators held a peaceful rally in downtown Durham on Saturday. Photo by Henry Haggart | The 9th Street Journal