Home » The board: cancellations, uncertainty, and hope on a bulletin board on 9th Street 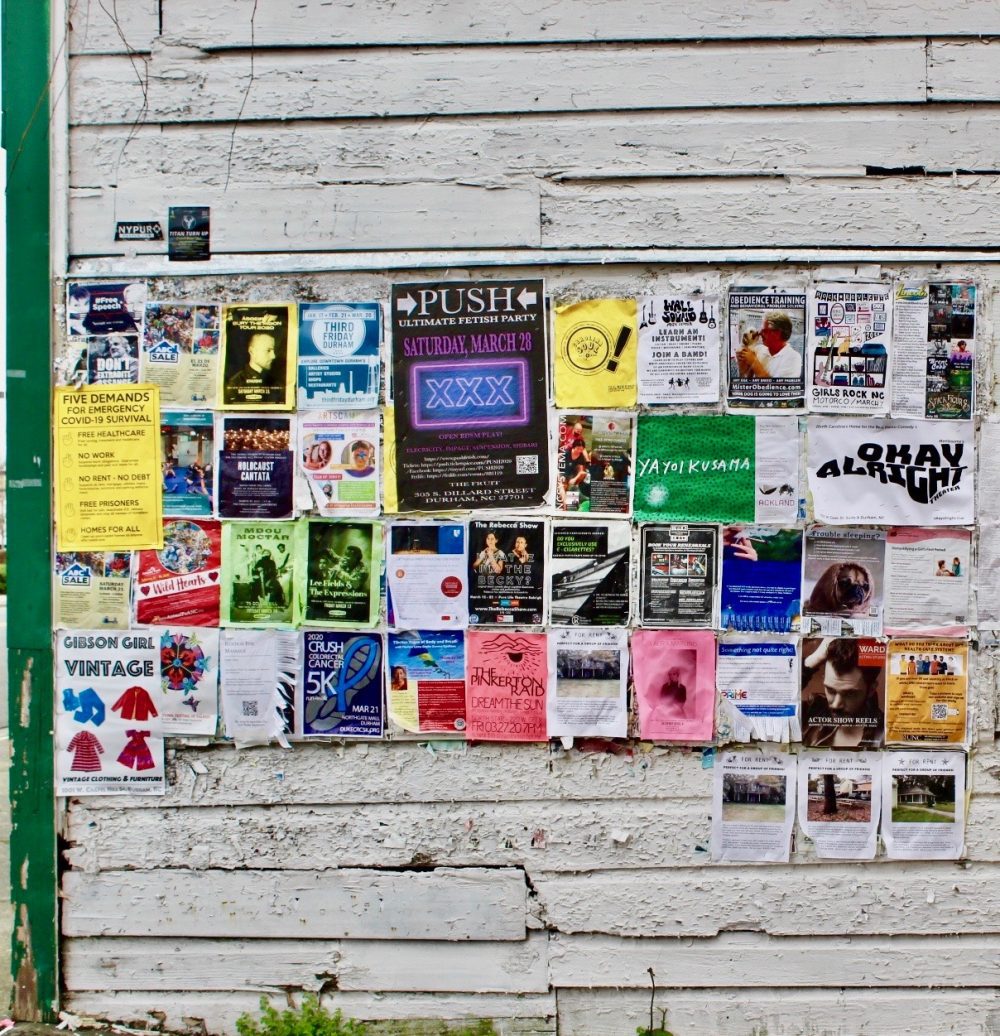 The board: cancellations, uncertainty, and hope on a bulletin board on 9th Street

The building is empty and the sun-bleached paint is peeling, but the wall of Ninth Street’s now-defunct clothing store, Native Threads, is still alive with a kaleidoscope of brightly colored flyers.

The makeshift bulletin board, an old-school way to learn about events in the area, stands as a snapshot of what life had in store before the COVID-19 shutdown. Concerts, comedy shows, and meditation classes have been canceled as chaos and social distance overtake the Triangle.

We tracked down the performers and organizers behind some of the flyers.

The flyer for The Bright Side Conference is, appropriately enough, quite bubbly. It promotes “a gathering high-fiving women for where they’re at now and helping them get to where they want to go.” But, with high-fiving recently deemed unsafe, the event won’t be held as planned in Raleigh.

Still, the Bright Side Conference “was always about optimism,” said organizer Jess Ekstrom, and she has adapted. With unpredictability being just about the only predictable thing in our lives, Ekstrom and her team are still leaning into their hopeful message: “We need (optimism) now more than ever.”

The conference will go on, but not exactly as planned. The organizers have shifted gears to make the whole thing virtual — which, Ekstrom said, came with an unforeseen slew of benefits. She invoked a phrase that a friend has been using: “With new problems come new solutions.”

The conference, originally open only to women, is now open to anyone. The virtual platform also allows self-paced access to talks and workshops that never expire on topics such as yoga, meditation, and art. The team has been able to invite more speakers now that travel is not a consideration, and their message is reaching more people and possibly having “a greater ripple effect.”

Ekstrom said the whole episode is a reminder to be flexible and learn. “Sometimes we think because something was our original plan, it was right,” Ekstrom said. In having to reevaluate her plans, she has found that there are “things in store for us that we don’t even know about.”

This has created a shift in the conference’s central theme as well; it will now focus on “the future and how we can remain optimistic.”

Ekstrom graduated from North Carolina State University with a bachelor’s degree in communication and media studies in 2013. Since then, she has started two businesses, made a name for herself as a public speaker, and recently published a book titled, appropriately enough, “Chasing the Bright Side.” The book emphasizes using optimism as a tool to create the life you want to live. She got her start in college, when she founded a company called Headbands of Hope that donated a headband to a child with cancer for every headband sold.

“I had no idea what I was doing but had this belief that I could make the future better,” she said.

She has taken a similar approach for the Bright Side Conference. Since participants won’t be getting swag bags, the conference is donating them to nurses and hospital staffers.

Yet even Ekstrom sometimes finds it tough to see the bright side. “It’s been one moment I’m like, ‘this is great,’ and then the next moment I get sucked into a dark hole on Twitter,” she admitted. She described it all as “an emotional roller coaster” but maintained a sense of hope. Like so many, Ekstrom is finding solace in the community that will come of this strange and unknown time.

“It’s affecting everyone,” she noted, “and that’s the good and the bad part. But there’s so much unity in that.”

The flyer for “The Rebecca Show” features two women striking thoughtful poses. Rebecca Fox and Rebecca Jackson-Artis are pondering one of life’s most pressing questions, the title of their performance at the Pure Life Theatre in Raleigh: “What if I’m The Becky?” Their website describes Becky as “a catch-all name for a white woman who doesn’t get it … is that redundant?”

The show, now postponed, was going to cover “sexism, racism, violence, the brutality of motherhood, exploitation in sports, regrets in old age, and the dynamics of changing friendships.”

Fox said the two “are proud to have made a decisive, timely choice” in pushing the performance back. The Manbites Dog Theater Fund, which was sponsoring the show, “has given all the recipients an extension,” according to Fox.

Fox, a bilingual speech language pathologist, teacher, performer and mother, said she is now focused on taking care of her children, who are out of school. She is not yet sure when performing will be back on her mind.

“I’m anticipating that we will all be inside for a long time,” Fox said, adding, “I’m hopeful that after my family and I have established some semblance of a new routine, I’ll be able to carve out some time and energy for work and a creative life again.”

It’s a time of uncertainty.

“Tibetan Lama Geshe Denma will introduce practices of Nine Breaths of Purification and Tsa Lung,” promises one flyer, advertising a weekend of Tibetan Yogas of Body and Breath.

It says the Nine Breaths of Purification “is a simple yet powerful practice for clearing our relationships to attachment, aversion and ignorance by regulating our breath and bringing awareness to the movement of the winds in the channels.”  Tsa Lung teaches exercises that cleanse the chakras. The flyer notes that these are “movements easily learned and benefits quickly felt.”

Unfortunately, the weekend of meditative practice has been canceled, leaving the chakras of many Durhamites clogged in the weeks to come. Lama Geshe Denma, who was born in Nepal and trained in India, was coming to Durham from a nearby retreat in Virginia. Now that he will no longer be passing through, it would be a challenge to reschedule.

But yogi and event sponsor John Gordon Moore has found peace with the decision. “Although I was certainly disappointed that the workshop had to be canceled,” he said, “it also provides an opportunity to practice contentment, and to gracefully accept whatever life offers.”

Moore, a Durham local since 1999, has been teaching yoga since 1987, and in his many years with the practice he has come to learn that it is “not only about flexibility of body but also of mind.” He mentioned that this time of reassessment and finding grace in the midst of disorder reminds him of an old Sanskrit word, “Santosa.” The word embodies a profound sense of comfortability or contentment.

Already, the quietness that life has taken on has prompted contemplation in Moore. “Surprised isn’t the right word,” he mused, “I’m impressed by the ways the community is coming together.”