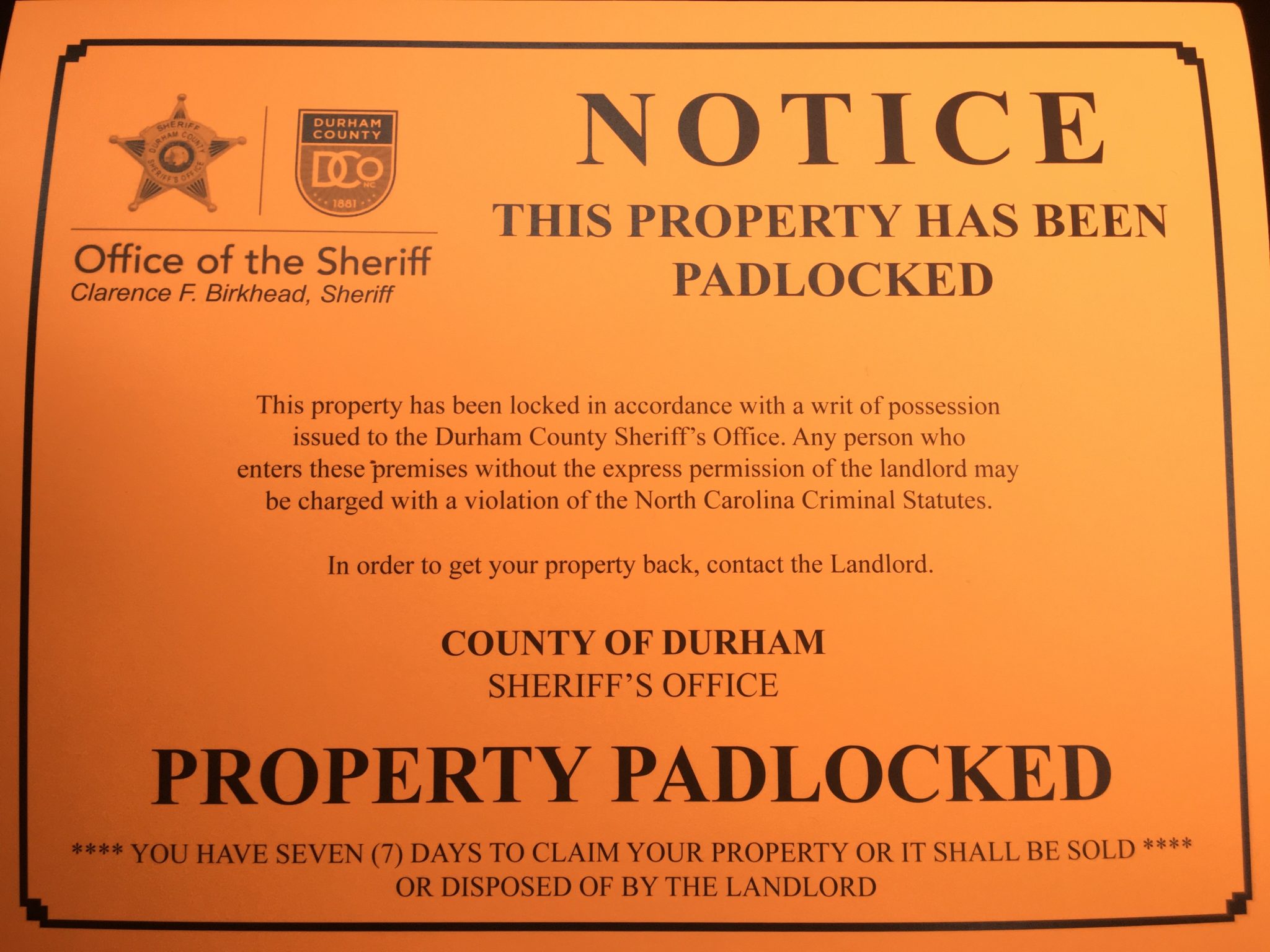 Sheriff Clarence Birkhead has stopped serving eviction notices and padlocking rental properties in Durham County to help slow the spread of the coronavirus that causes COVID-19.

A Monday evening statement from Birkhead confirmed that his office has decided to halt eviction service.

“I am suspending the service of these judgments until further notice,” Birkhead said. “Although Chief Justice Beasley’s order does not specifically address this process, it has been interpreted that under that order a suspension would be allowable.”

That effectively shut off the flow of new writs of possession — the court orders to evict tenants that have lost to landlords in court. But while new writs stopped coming more than a week ago, dozens already existed. The sheriff’s office estimates around 180 evictions occur in Durham every week.

As of last Wednesday, the sheriff’s office said it was still legally required to serve those pending eviction writs. But on Thursday, Beasley issued another order that ended up freezing those writs, too. It pushed back the due dates for many filings and “other acts” of the North Carolina courts, including evictions. Under this order, actions due on March 16 or later would now be on time if done by April 17.

Normally, tenants who lose in court have 10 days to file for an appeal. Under Beasley’s order, motions to appeal an eviction ruling are still timely if filed by April 17. That means all eviction cases with original final appeal dates on or after March 16 are postponed.

Last Friday, the office of the Clerk of Durham County Superior Court said it had stopped issuing writs for such cases and recalled all of the writs it had sent throughout that week involving those cases.

On Thursday evening, the Durham sheriff’s office indicated it was working to interpret Beasley’s order hours after it came out that day. The office continued to consult with legal teams and the judiciary on Friday.

By the time the sheriff decided to stop serving writs, there may have been none left to serve. Gilbert, who works in the Eviction Diversion program run by Legal Aid and Duke Law’s Civil Justice Clinic, said the pending writs were likely all recalled by the clerk.

“It’s essentially moot,” Gilbert said Monday, before the sheriff issued his statement. “It’s not his authority, because the clerk has started recalling any writ from March 3 or after. That should be and almost certainly is all of the pending writs of possession.”

Clerk of Durham County Superior Court Archie Smith could not be reached Monday evening to clarify whether all pending writs had been recalled. But on Thursday, Smith told The 9th Street Journal he intended to follow the spirit of Beasley’s order.

Birkhead’s Monday statement said that “no one has been evicted into a homeless situation as a result of recent orders.”

But some evictions may have already occurred amid confusion. According to Gilbert, at least one padlocking occurred on Thursday before Beasley’s order, but after sheriffs in other counties had stopped serving evictions.

“Anyone being evicted during this time is at a great risk, not only to themselves, but as a vector carrying disease,” said Gilbert. “The governor is urging us to stay home. It’s impossible to stay home if you don’t have one.”

Durhamites struggling to pay rent will be able to stay in their homes for several weeks, but eviction still looms over them.

“These cases are delayed. They are not dismissed,” Gilbert said, adding that courts are still receiving new eviction filings.

“When this ends, there is going to be a tsunami of evictions,” Gilbert said. “That is going to be aggravated by the fact that so many people in Durham are cost burdened. They are already spending over half their income on rent, and with so many workers losing hours or being unable to work at all, I suspect that whenever this ends, we are going to have a real eviction crisis.”

At top: A sign posted by Durham County sheriffs deputies before a landlord changes the lock. Photo by Niharika Vattikonda