Home » A Durham moment: Strolling through the Durham Night Market 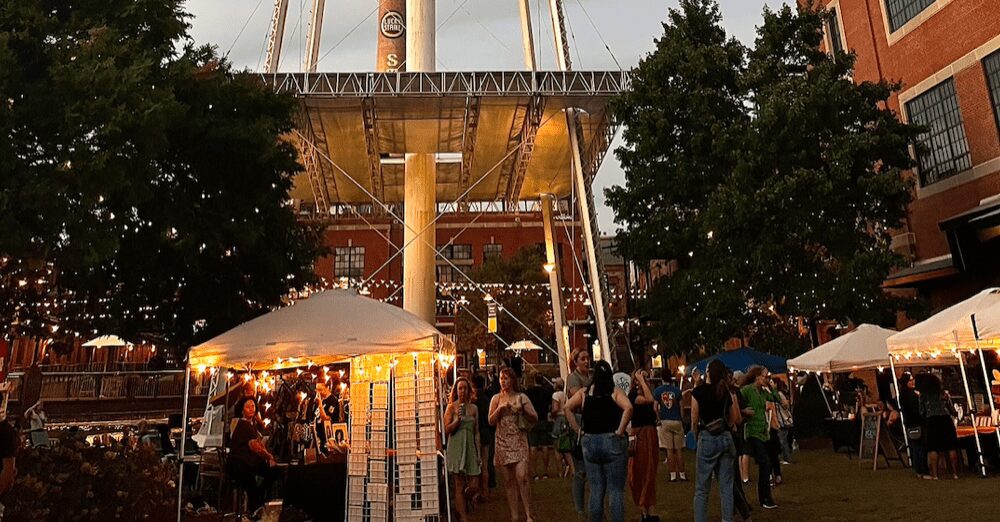 A Durham moment: Strolling through the Durham Night Market

It’s 5:30 p.m. on a Thursday. The sinking sun lights a fire behind the Lucky Strike water tower, bathing Downtown Durham in its glow. People leaving work flood the streets, making their way towards the American Tobacco Campus.

Some take a detour towards the Durham Bulls Athletic Park to catch a glimpse of Ripken the bat dog gearing up for Friday’s game against the Norfolk Tides. Others stop to investigate the transplanted rickety Maine cabin and beehive that belonged to Burt Shavitz, the founder of Burt’s Bees. But most head straight toward the beating heart of the hub: the Durham Night Market.

As the market comes into view, the crescendo of the manmade Old Bull River rushing across the old railway tracks—complete with antique train cars—begins to fade. Twinkling Edison lights strung up across the treetops come into soft focus. Local a cappella group Second Shift’s rendition of Queen’s “Don’t Stop Me Now” intermingles with people chattering. 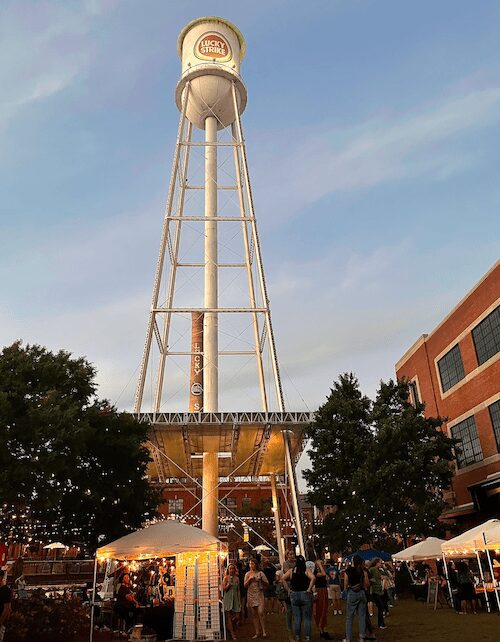 The first cool evening breeze in months announces autumn’s arrival. It’s a relief from the day’s heat for the families and friends claiming their spots on the lawn with checkered picnic blankets.

Girl Scout troop members sitting in a circle pull quarters and nickels from sequined coin purses and pool it in the center. A Shih-Tzu and a Maltese strike up a cacophonous conversation while their respective owners chastise them.

Framing this scene are parallel rows of three dozen multicolored tents—each manned by local artisans selling their wares. A cabinet of curiosities, the market offers everything from hand-crocheted rainbow teddy bears to lavender-lemon loaves freshly baked in the shape of frogs.

Some veteran vendors turned their lifelong passions into successful business ventures decades ago. One, Ryan Fox, started his art studio after taking painting and photography classes in college.

Fox’s booth is lined from floor to ceiling with landscape prints inspired by photographs taken during his travels. The watercolors capture deep blue swirls of Icelandic lagoons and bright orange facades of Moroccan palaces. A select few are dedicated to Durham’s crown jewels—the skyline, the Duke Chapel, and Brightleaf Square.

But one print is not like the others; it depicts the iconic North Carolina State University Memorial Belltower’s impending doom. 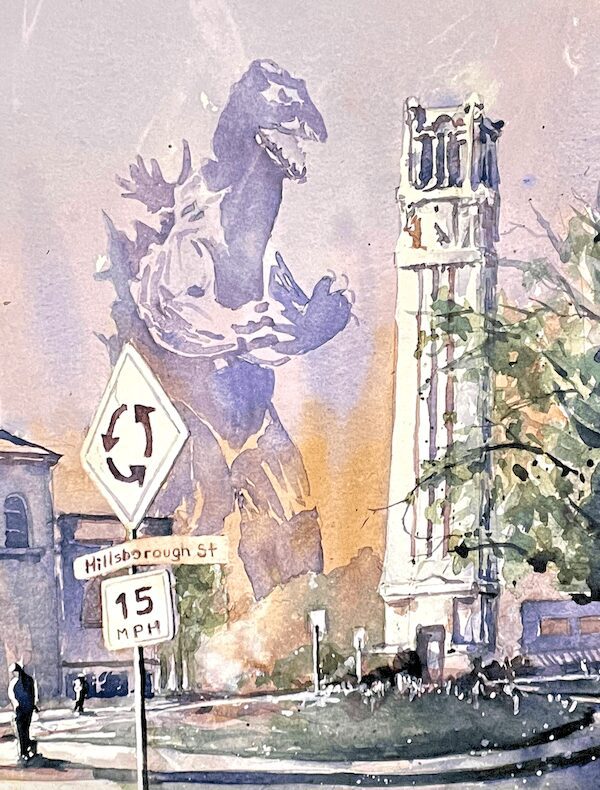 “This one was originally just the tower—I hated it. I wanted to rip it up into little pieces,” says Fox. “But then I saw my kids watching the new Godzilla movie, and I had the idea to paint Godzilla in, having the monster destroy the painting from the inside instead. People love it.”

Down the row, there’s another seasoned vendor most Durhamites will recognize: the Poetry Fox. Chris Vitiello is a performance artist who writes ad hoc short-form poetry on a subject of the buyer’s choosing while donning a red fox suit. He’s done so for nearly three decades and written over 38,000 poems. 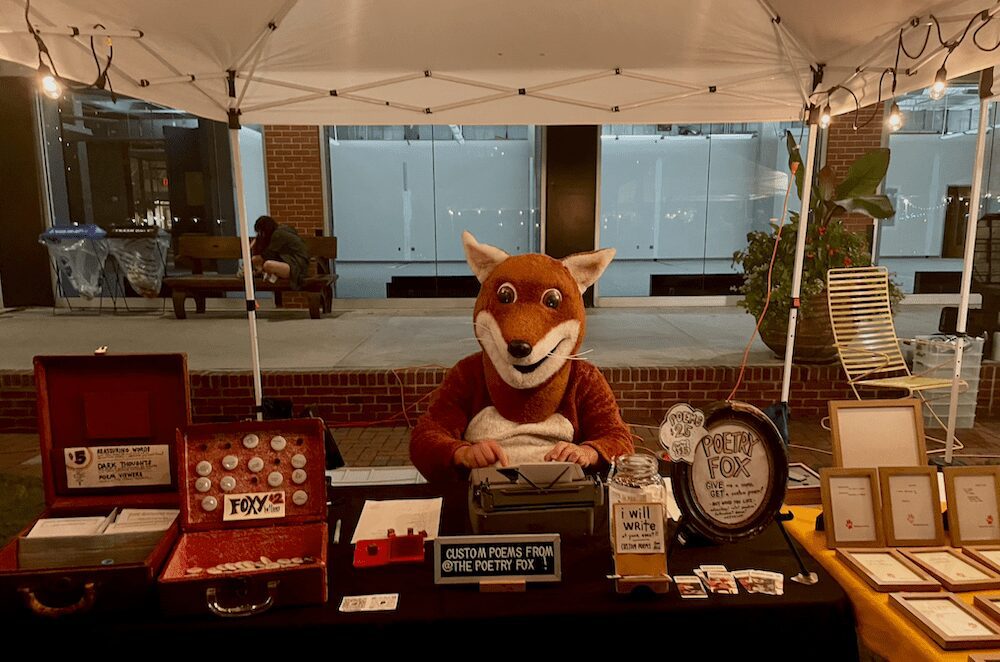 Other vendors are still getting their feet wet. Calile DeThomas is a Durham realtor who moonlights as a woodwork artisan. She designs patterns online, which she then uses to laser cut and paint wooden pieces. Among her offerings are intricate mandalas, ecology board games, and Major the Bull silhouettes. She also creates 6-inch wooden fairy doors—complete with LED lights—that open and close on miniature hinges.

While DeThomas has always been interested in this art form, she only started her business, Calile’s Creations, two years ago.

“After buying a laser-cutter and making myself little creations, I was hooked,” she says, touching her wooden Jack-O-Lantern earrings.

But it hasn’t all been smooth sailing. DeThomas struggles with the handheld credit card machine.

“Everything is cashless now, so it’s a learning curve,” she says with a grin.

Across the way, there’s another artisan who started her business during the pandemic. Jamie Hicks was a reporter traveling the world for the better part of five years. After being called back from assignment in the Cayman Islands in March of 2020, Hicks decided to pursue her bucket-list dream full-time: opening an all-natural bath and body shop. 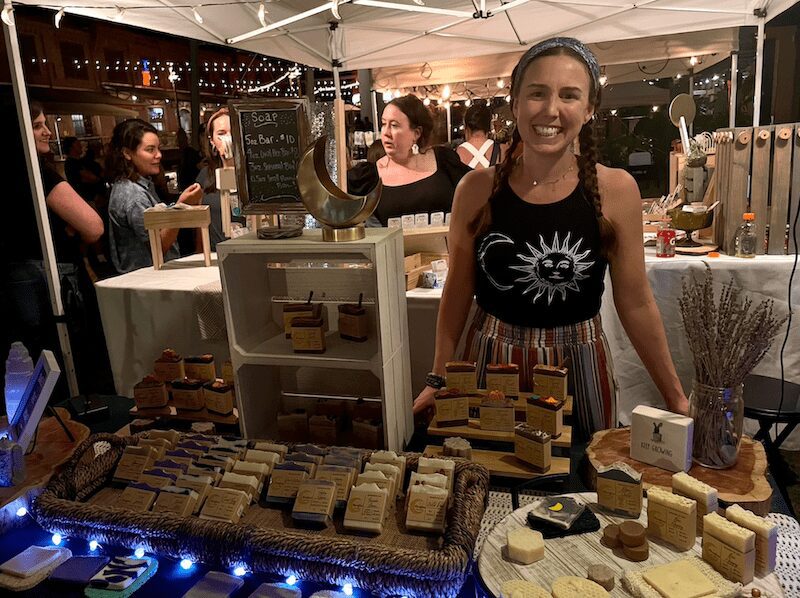 “After being a crime reporter for so long, I wanted something light and fluffy to look forward to post-pandemic,” says Hicks. “So I founded the Moonstone Company.”

Earthy notes of eucalyptus, wild rose, and sandalwood fill the tent as shoppers browse through Hicks’ assortment of soap bars and candles. Each piece is wrapped with care in speckled recycled paper sleeves emblazoned with a crescent moon logo. Hicks’ favorite for anyone in need of a pick-me-up is the coffee bean and oat milk bar.

The sun dips below the horizon. Buyers make their last purchases and gather on the lawn sipping Taiwanese bubble tea. They lay out their honeysuckle hand pies and alpaca fur slippers on picnic blankets like spoils of war. An acrobat dressed in neon pink and purple flower crown and leotard starts to perform. With her Cheshire Cat smile, she’s a blur between streamers and hula hoops in the dim light.

The acrobat finishes her show to a round of applause. With arms full of newfound treasures, patrons start the trek home. Vendors close up their tents. As quickly as it came, the energy of the market ebbs into the night. 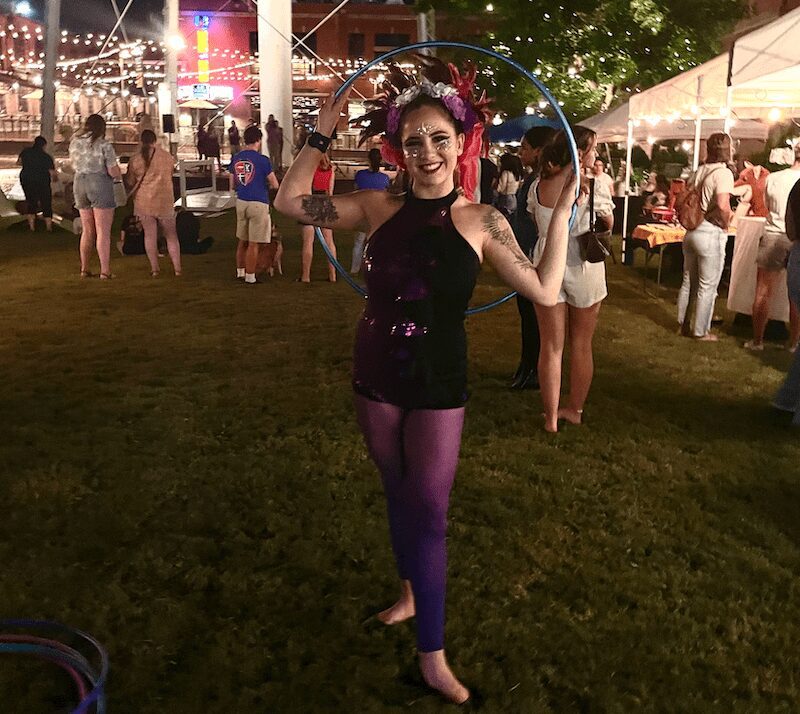 Photos (from above): the Lucky Strike tower rises above the Durham Night Market; Godzilla attacks the N.C. State University Memorial Belltower in a painting by Ryan Fox; Chris Vitiello, a.k.a The Poetry Fox;  local artisan Jamie Hicks; an acrobat from the Imagine Circus. Photos by Gwyneth Bernier — The 9th Street Journal