Home » A Durham moment: Cleaning up an urban stream 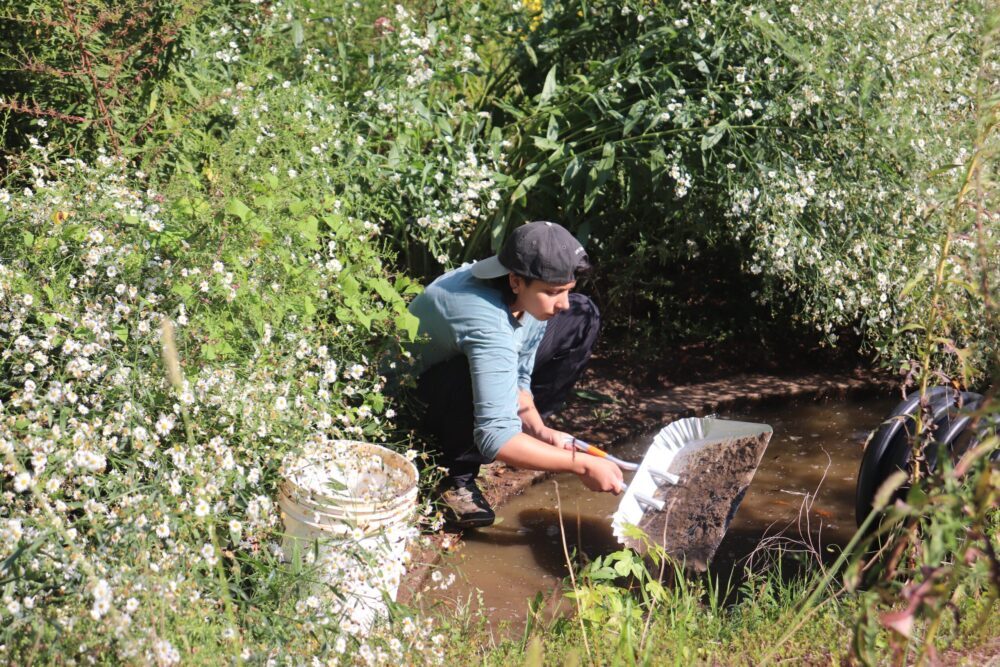 A Durham moment: Cleaning up an urban stream

On Saturday, a handful of volunteers in matching blue tee-shirts hike through winding trails. They arrive in pairs at a five-acre patch of lush green filled with twittering cardinals and buzzing honeybees—an oasis from the urban hubbub of downtown Durham. Armed with mismatched shovels and buckets, they make their way to the base of a bubbling creek that cuts through the overgrown foliage.

One volunteer spots a monarch butterfly floating above the late arrivals’ heads, and calls out to the others.

“Look, it’s coming for us!” the volunteer exclaims.

“Did you know they migrate all the way from Canada to Mexico?” asks another. 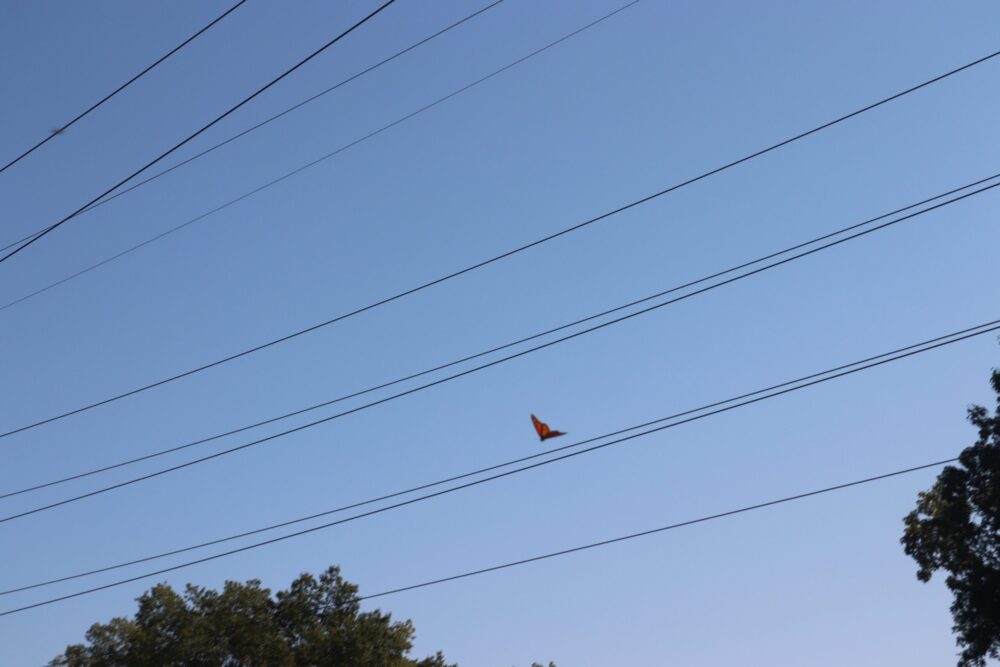 The volunteers from the Ellerbe Creek Watershed Association (ECWA) have gathered for a workday at Pearl Mill Nature Preserve. Tucked between West Markham Avenue and Rand Street, Pearl Mill is managed and maintained by the association. Ricky White founded ECWA in 1999 with the goals of land conservation and water quality protection, and acquired Pearl Mill as a donation from Duke Energy seven years later.

The ECWA volunteers work diligently in the morning sunshine to weed and seed a green infrastructure apparatus at the base of Ellerbe Creek called a bioretention cell.

A bioretention cell is a type of filtration device that filters pollutants from stormwater runoff through native plants and special sand. It looks like a garden pond and mimics natural processes, but is highly engineered and requires regular maintenance during the growing season.

The cell is needed to improve water quality in Ellerbe Creek, which is important both to Durham and other nearby cities. Ellerbe Creek flows into the twenty-mile Neuse River, which in turn empties into Falls Lake. So  pollution from Ellerbe Creek enters Falls Lake Reservoir, which supplies drinking water to Raleigh.

Yet Ellerbe Creek has a history of poor water quality. Due to polluted stormwater runoff from nearby roads, the creek has been on the state of North Carolina’s list of impaired bodies of water for years. Untreated stormwater frequently enters natural surface waters in Durham and carries with it pollutants that harm the surrounding wildlife and ecosystems. When rain falls on an impervious surface like a roof or road, it gains heat and speed, picking up sediment and other pollutants along the way. The runoff then enters natural surface waters at a higher temperature, velocity, and pollution level.

In 2016, the City of Durham also gave Ellerbe Creek a poor water quality grade of 73, comparable to a “C,” when it found 58 sources of pollution—notably erosion and sediment discharges—in the water. The water quality score reflected elevated levels of nitrogen, phosphorus, and bacteria, all of which can be harmful to human and animal health.

In 2017, ECWA devised an innovative plan to help combat this pollution: the installation of a bioretention cell. The association’s Water Management Program Coordinator Laura Stroud, who joined two years ago, says the cell is one of her favorite projects.

“There was an immense amount of planning and fundraising that went into being able to design and build the cell,” Stroud says. “It puts a big damper on how much gravel and sediment gets into the creek itself, meaning people and wildlife can use the stream in the way they were intended to.” 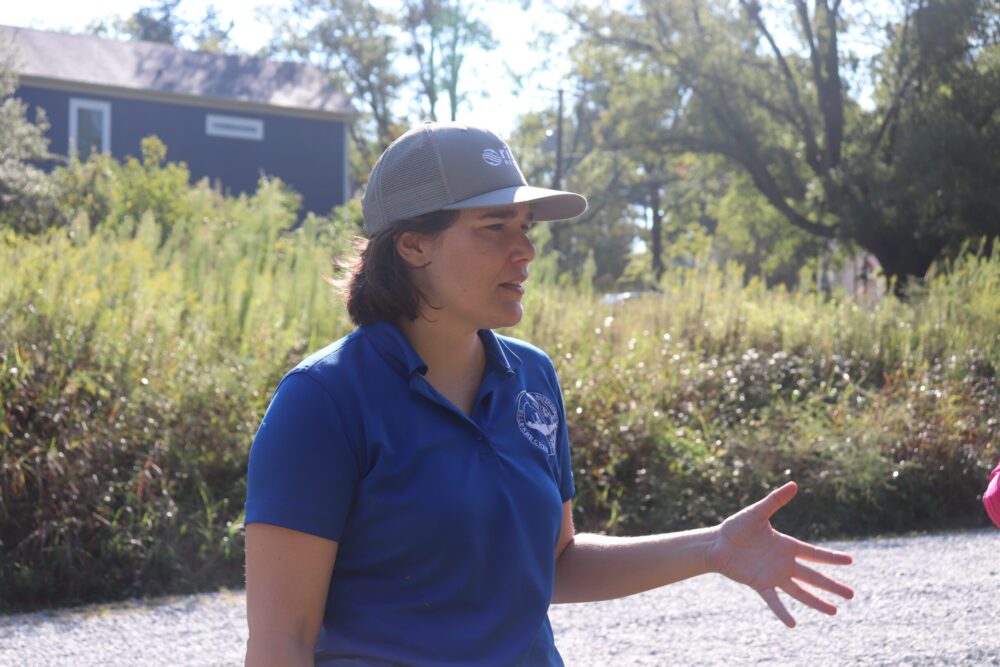 Stroud’s observation is backed by the data. In 2018, following the installation of the filtration device, Ellerbe Creek was given a water quality grade of 86 — comparable to a “B.” Though that score has fluctuated in recent years, it has remained better than pre-2016 pollution levels.

On Saturday, Carol Donin was volunteering at Pearl Mill for the first time. When Donin saw Pearl Mill being worked on a few years ago, she was initially concerned that the preserve had been sold to housing developers. Then she learned about the work being done to clean the creek.

“I was so excited,” she says. “You don’t see enough environmental stewardship in Durham.” 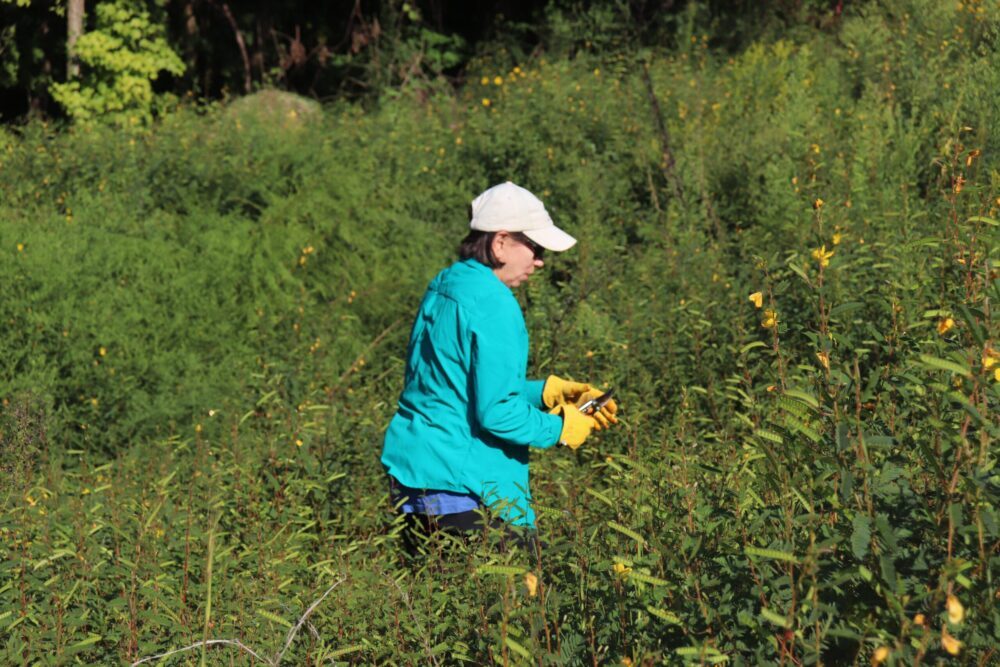 Knee-deep in the creek and sporting worn yellow gardening gloves, Donin clears dogwood and elderberry blooms from the area with a pair of shears. A retiree and 23-year resident of Duke Park, Donin enjoys cycling and hiking on nearby trails. She was inspired to take action after hearing an ECWA representative speak at her neighborhood association meeting. As someone who enjoys the outdoors, Donin says she feels a responsibility to take care of natural spaces.

After working for an hour, Donin flashes an exhausted grin.

“Even if you just put in thirty minutes of time, you’re still helping the environment and helping ECWA towards their mission of having cleaner water,” she says.

Stroud says the association’s work is even more important post-pandemic.

“One thing that COVID did was illustrate to people how important urban open spaces were when we all had no place else to go,” she says. “Durham’s nature preserves and trails were there for us and it’s important to make sure those spaces are protected and accessible to everyone in the city.”

ECWA’s future initiatives at Pearl Mill include creating a rain garden for filtering stormwater before it reaches the creek, a large stream restoration and stabilization project, and more  community educational opportunities.

More information about the association, including upcoming workdays and creek clean-ups, can be found here.

Published in Environment and Life in Durham