Home » A Moment in Durham: ‘In Algeria, baking is always about community’ 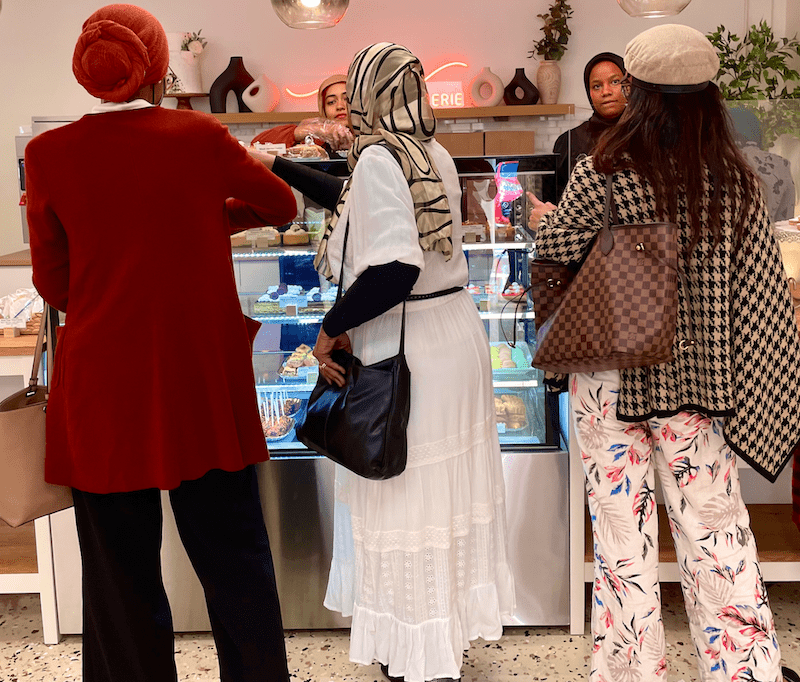 A Moment in Durham: ‘In Algeria, baking is always about community’

On a chilly Saturday morning, Djamila Bakour ties together clusters of white, gold, and pale green balloons to adorn the concrete facade of a shopping center in Southern Durham near Research Triangle Park. She carefully places a trail of chalkboard signs that read “Grand Opening!” in cursive leading to the door of her bakery, La Recette Patisserie.

Bakour darts back inside to check her ovens. A moment later, the smell of freshly-baked ginger blondies wafts out the door, drawing in a crowd. Some people speaking French dash to claim their seats. Others speaking Darja –the Algerian Arabic dialect– stop to pull one another into tight embraces. They come bearing gifts of rose bouquets and shiny silver baking tins.

Still others rush to take their place in line in front of the grab-and-go case, where salted caramel truffles and almond-date crusted lemon tarts stand at attention like soldiers in meticulous rows.

These desserts represent owner Bakour’s fusion of French and Algerian baking styles, a hallmark of the menu at the new La Recette Patisserie. 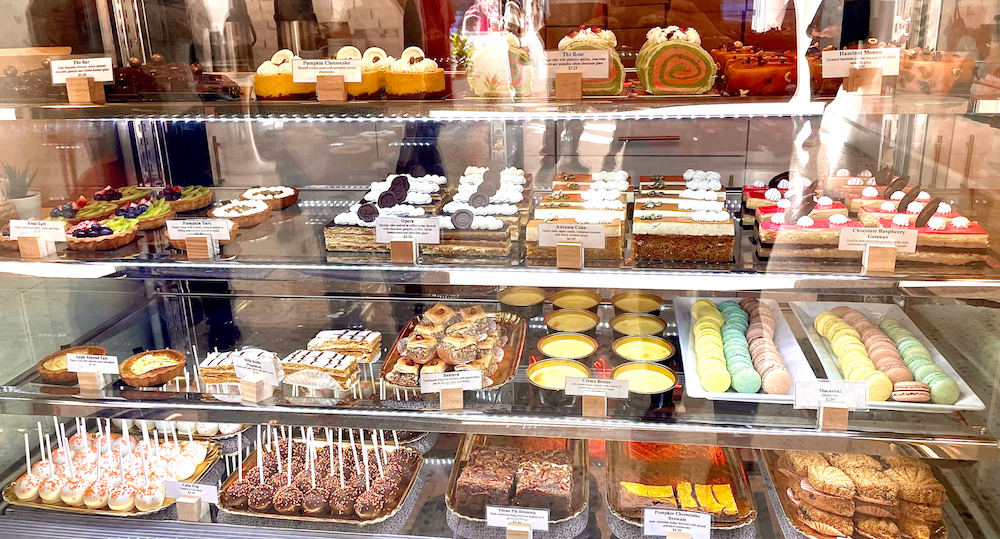 In the middle of the commotion, Bakour bursts through a set of sliding wooden barn doors that lead from the kitchen, holding a mirror-glazed pistachio praline cake in one hand and a piping bag filled with pink cherry buttercream in the other. She marches by her line of back-counter cakes, ready for their deployment to graduations and weddings. Bakour’s creations are outrageously whimsical, yet sophisticated. Winnie the Pooh sits with his signature honey pot atop a bright yellow beehive. A shimmering, ombré periwinkle mermaid tail dives into a waterfall four tiers high. Rapunzel lounges in her bubblegum-pink palace with licorice ivy vines that wind around its towers.

To make her creations so quickly to order, Bakour has learned that organization is paramount.

“I keep my generals in line,” Bakour jokes with a playful wink, tilting her head towards her four giant industrial stand mixers.

But she balances this fastidiousness with a penchant for creativity.

“I’ve never made the same cake twice because I like to consult with my customer before I start designing,” Bakour says, glancing proudly at her masterpieces. “The final product is always a unique combination of my customer’s feelings and my mood that day. My customers take the cakes home, but on a deeper level the piece of edible art is ours because it represents both of us coming together.” 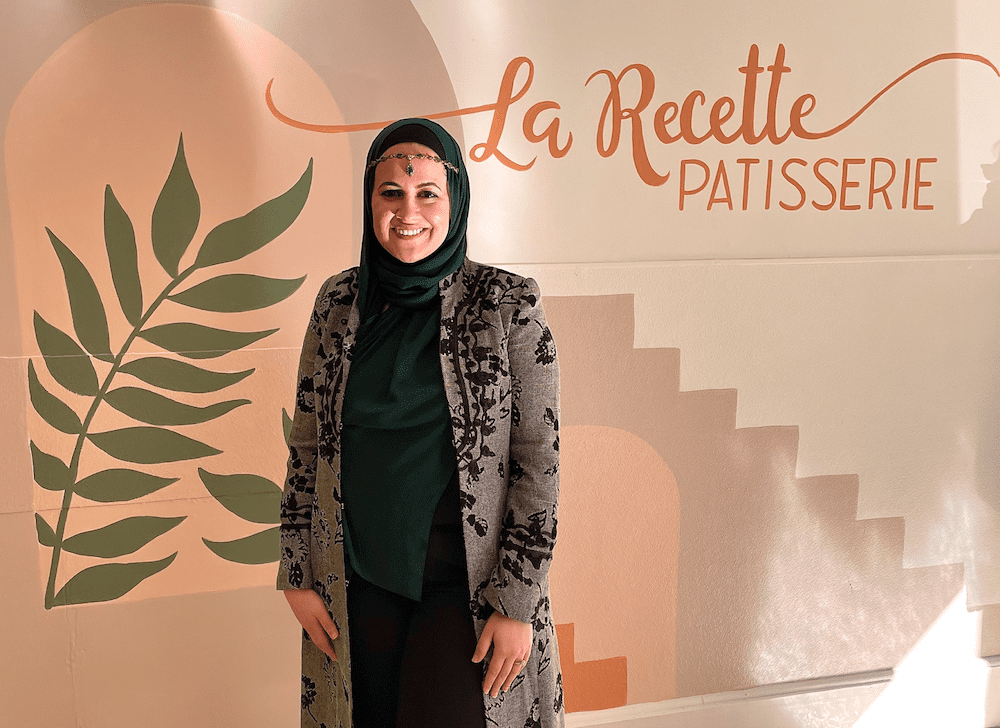 Bakour started making cakes as a home baker in 2015, fulfilling wholesale online orders after graduating from North Carolina Central University with a degree in food science and nutrition.

“I didn’t look that hard for a regular job after college,” she says with a chuckle, kneading croissant dough. “As an immigrant, I wanted to do my own work—be my own boss doing what I love.”

Bakour owes her love for baking to a childhood spent helping her mother bake for family and friends in Algeria. After immigrating with her family to the United States 15 years ago, Bakour finds her confectionery concoctions still help her feel connected to home.

To reconnect with the source of her passion, Bakour went back to Algeria for six months in 2017 to take a course from a French pastry chef.

“Algeria—and all of North Africa—is very influenced by French cuisine and culture,” she remarks, while dusting her blueberry cake pops with gold powder. “So I learned how to blend the disciplined technique of French pastry with flavors from the Algerian tradition I grew up in.”

After returning to Durham, Bakour was determined to bring “Arab hospitality” to her adopted city. In order to do so, she knew she needed a retail storefront. Bakour settled on her current two-room space on Meadow Drive because she felt the location was lucky.

“This place used to be a bakery before they upgraded to a larger space,” she said, wrapping her traditional Algerian “sables” cookies. “So it must have good vibes!” 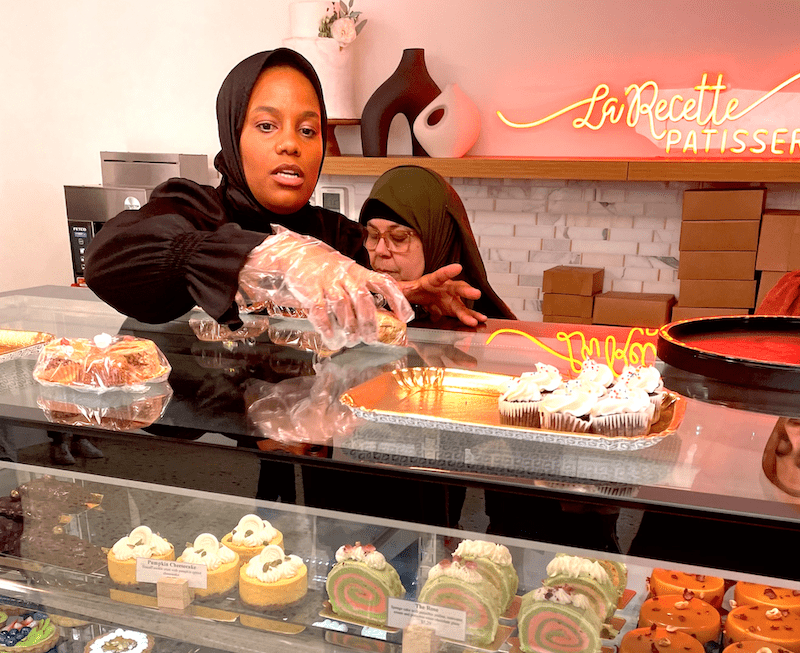 Thanks to the financial support of her online following, Bakour was finally able to sign a lease on her dream location last November. Her Kickstarter drive raised over $27,000 from 365 donors in the first month it was online.

“It’s crazy—I’m so humbled!” Bakour exclaims, briefly dropping her whisk to press crossed palms to her heart. “I get so emotional every time I think about the support my dream has from the Durham community.”

Bakour attributes her bakery’s popularity to her social media strategy. Boasting over 7,000 followers and counting, Bakour’s hyper-stylized Instagram feed nails the platform’s aesthetic through her careful curation of digital pastels and florals.

“I love designing every post with my favorite fonts, thinking of captions, and posting pictures I took on my iPhone,” Bakour says, stamping stars onto her batch of strawberry Linzer tortes. “It’s so great to be able to engage with my customers all the time in the comments section.”

Bakour’s authenticity shines in her video reels, in which she pulls back the curtain on how she makes the bakery’s most popular items. With an effervescent smile, Bakour walks her followers through her baking process in minute-long video snippets.

“With my videos, I can speak from the heart,” she says, piping her vanilla bean cookie pie filling. “That’s where I try to keep it real with my followers.”

Before opening her storefront, Bakour had to develop a grab-and-go menu for her future customers. Her sugary multicolored macarons represent the bakery’s classic French influence, whereas her savory labaneh zaatar–feta cheese and herb–danishes represent its distinctive Algerian flair. 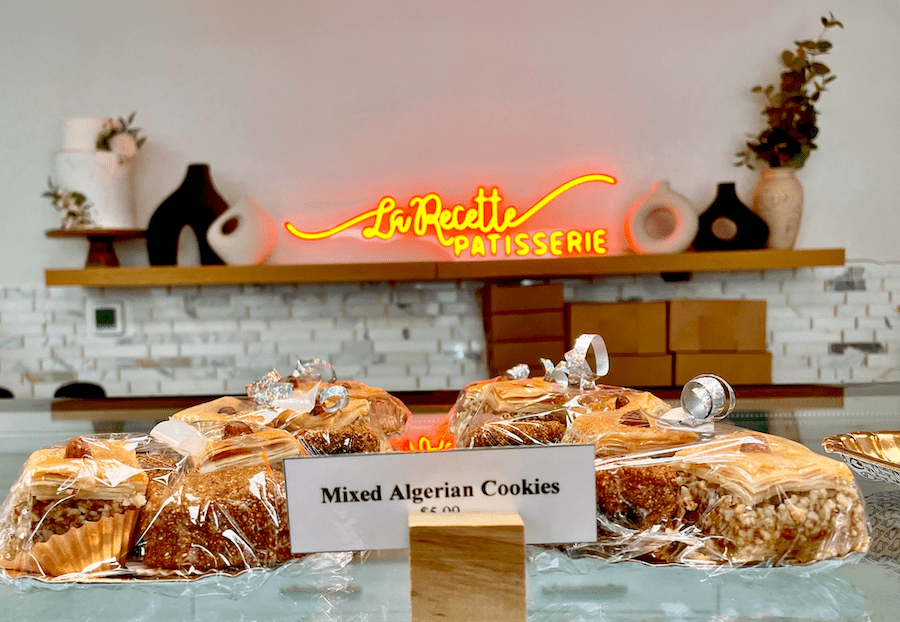 To make and sell all her delectable menu items, Bakour had to find staff, including the two women working furiously behind the counter to rearrange a quickly vanishing display of rose petal cupcakes. Behind them is the bakery’s name lit up in orange neon. The sign’s glow illuminates a white and indigo sugar-crystal encrusted geode cake destined for a 17th birthday celebration elsewhere.

“I actually hired two of my best friends, Amal and Areba,” she says, motioning to the two women. “They’re especially great as my farmers’ market team.”

But the bakery is mostly a family affair. Bakour’s husband Fadi Ghanayem brews pitchers of Algerian mint tea in the kitchen while her parents stamp to-go boxes with her logo. Aunties from the mosque popped by during the day to check on Bakour and lend a hand at the cash register.

Once Bakour enlisted her helpers, only one thing was left to do: design the bakery’s interior. Much of the décor includes subtle nods to her heritage, from ornate cushions purchased at markets back home to potted cactus species native to the Sahara. Even the floor—an eggshell and gold marble—is made from the same material as the floor of her grandparents’ house in Algeria.

Her hand-painted mural on the east wall transforms the space into an Algerian street scene.

Pictures of her hometown inspired the imagery of the desert sun beating down on small streets that wind through angular architecture. The minimalist painting’s maroon, burnt orange, and salmon pink hues are taken directly from Algerian art, but the palette also makes for a trendy background as customers snap and share selfies. 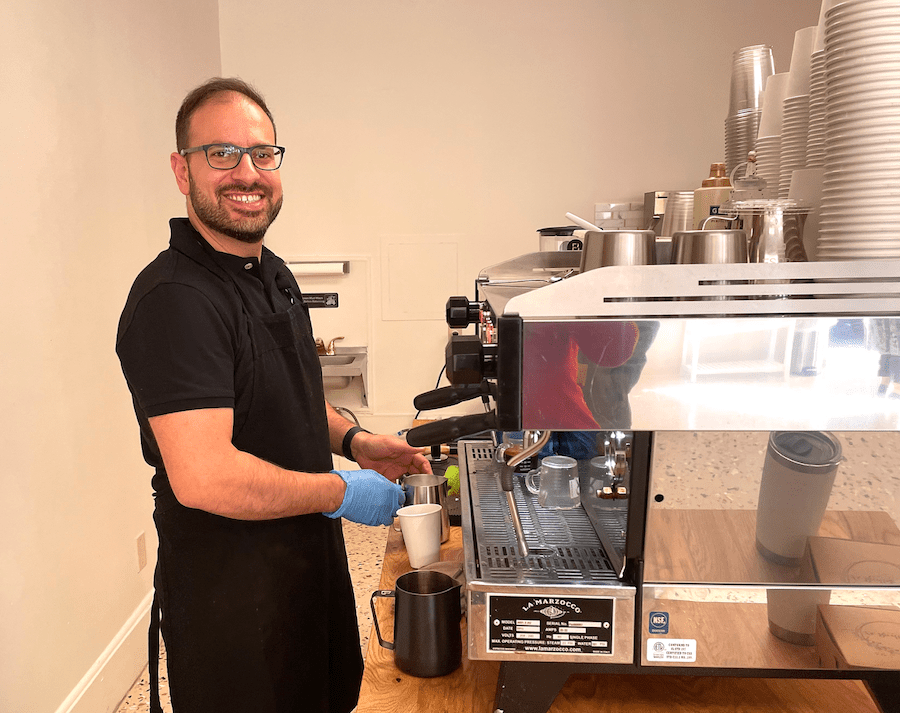 “It’s a blessing to see so many people coming together to support a Muslim woman-owned business,” she gushes, putting the finishing touches on a cake covered in cyan flowers. “I never could have done it alone.”

Beyond her in-house and online supporters, Bakour also had the support of established small businesses in Durham. She often goes to husband and wife duo Areli and Leon Grodski—co-owners of the Cocoa Cinnamon café—for business advice. Their partnership is reflected in the bakery’s opera cake, one of her best-sellers. Bakour infuses the icing with Cocoa Cinnamon’s original coffee blend for a local twist on a French classic.

In the long term, Bakour wants to open more locations and establish a weekly schedule of in-house cake decorating classes. But in the short term, she’s thrilled with the turnout for her grand opening.

“My French-style training elevates my desserts, but in Algeria, baking is always about community,” Bakour says. “Food is a universal language, and it’s a way for us all to connect during events like today.” 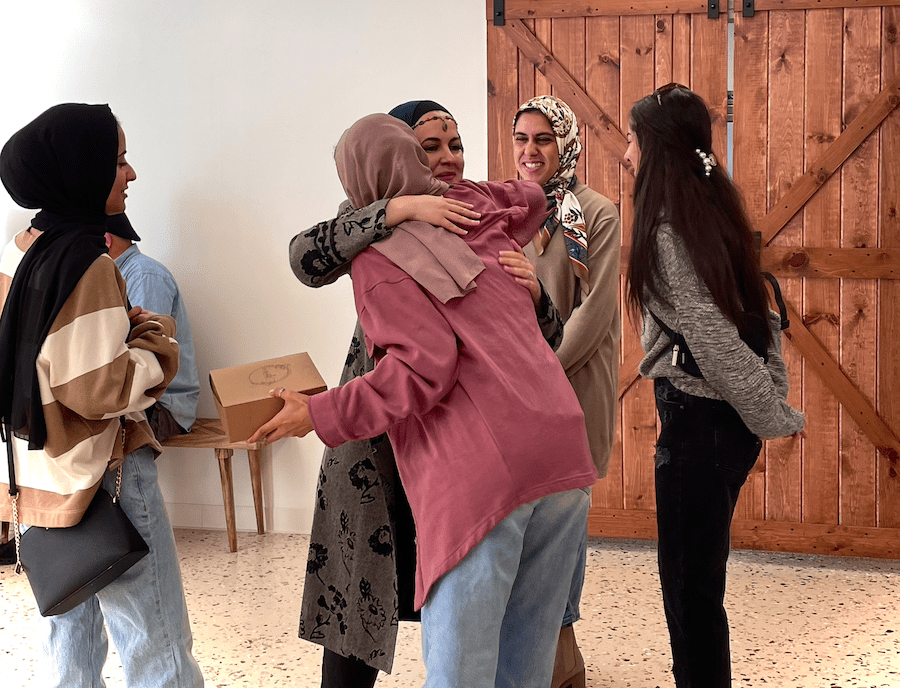 As she speaks, a mother gives her young son a bite of a cookie and a group of teenage girls giggles between bites of pumpkin cheesecake.

“I want La Recette Patisserie to be an outlet in which the community can grow and thrive,” Bakour says. “This is a place by community members for community members. I want people to build good relationships around quality desserts here.”

Bakour sets down her spatula for a moment. She notices a group of customers walk in the door. She turns to give them all hugs.