Home » A Moment in Durham: ‘You don’t have something like this anywhere else’ 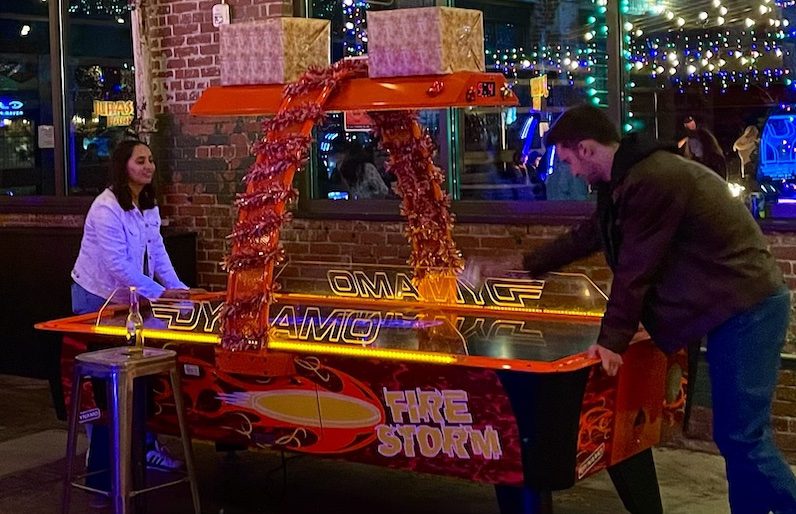 A Moment in Durham: ‘You don’t have something like this anywhere else’

Ping! The silver pinball ricochets off a triceratops’s horns. Ping! It bounces back with the flick of a stegosaurus’s tail. Ping! The ball rebounds off a pterodactyl’s wing right into the gaping jaws of a Tyrannosaurus Rex.

The Jurassic Park-themed pinball machine’s sirens go off and rainbow bulbs light up. Celebrating his victory, the player leaps up and pumps his fist in the air with a resounding “whoop!” A few people applaud and others work their way through the commotion to line up at the pinball machine of their choice. Lined up in rows, the machines each recall classic fantasy and sci-fi movies like “Back to the Future,” “Star Wars,” and “Guardians of the Galaxy.” 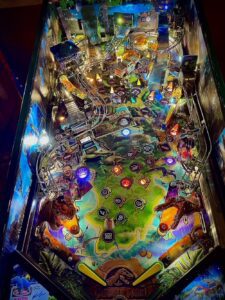 Welcome to BoxCar Bar and Arcade, a staple of downtown Durham nightlife. BoxCar was founded in 2018 by Jerrad Bement, who grew up in the ‘80s and ‘90s hanging out with his friends at a local arcade. The club’s golden game tokens pay homage to the hundreds of thousands of virtual Donkey Kong coins he collected during his childhood. Bement also chose the space, an old warehouse building downtown with brick walls and an exposed metal pipe ceiling, because it reminded him of the retro Nintendo aesthetic. A 21+ establishment, it’s a “cool nerd haven” for adults looking for a throwback.

BoxCar offers plenty of nostalgia for even the most hardcore video game aficionados. A group of guys in fraternity tee-shirts clamors around a Mortal Kombat machine, shouting “fight, fight, fight!” as they make Sub-Zero battle Scorpion. A couple celebrating their anniversary duel at side-by-side Pac Man machines donning red and green Mario and Luigi hats. A group of girls in alien costumes faces off at the Space Invaders machine.

The fun isn’t limited to people, either—BoxCar is dog-friendly. A girl playing Halo: Infinite holds her rifle in one arm and her French bulldog in the other. A guy playing Ridge Racer holds his Australian shepherd on his lap, its paws on the steering wheel. A chocolate lab wearing a red bandana fetches the ping-pong ball every time his human parents accidentally hit it out of bounds. 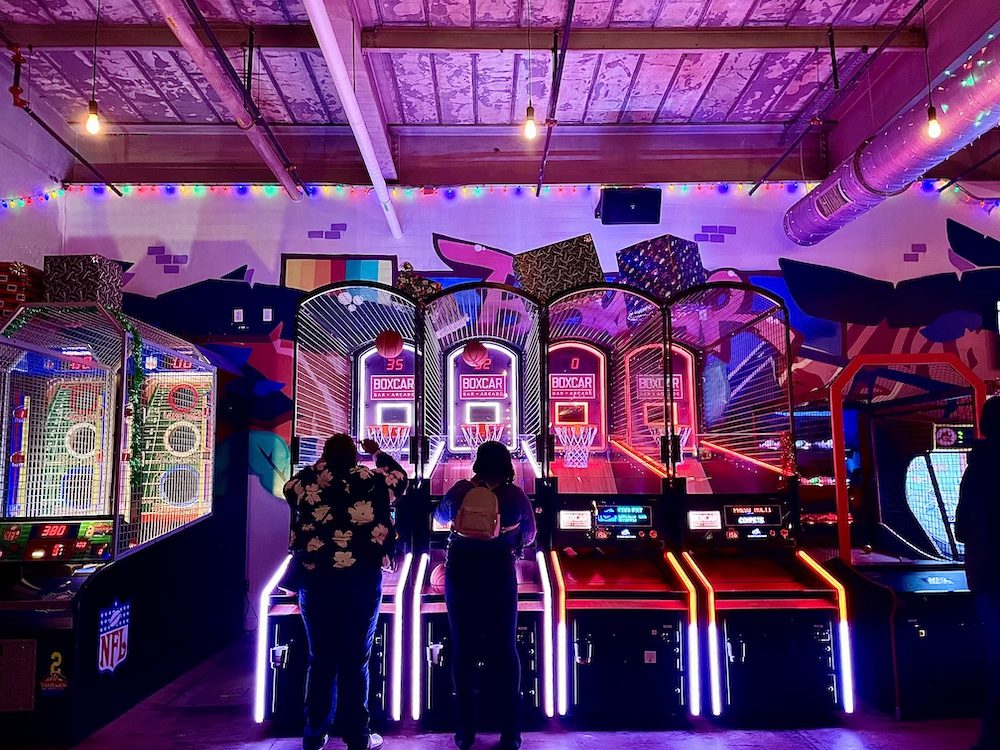 In a hyper-technological era where home Xbox and Playstation video games reign supreme, BoxCar harkens back to a time when gaming was more social. College student Melanie Butcher, who frequents BoxCar with her roommates, says she keeps coming back for the atmosphere.

“You don’t have something like this anywhere else,” she says. “The closest thing to it is places like Dave and Busters, but they’re always overrun with kids focused on winning prizes and the automated, casino-style games aren’t fun after a while. I can actually enjoy [BoxCar] with my friends—and it doesn’t have a cover charge to boot, so I can always convince new people to come with me.”

After working up an appetite during air hockey tournaments, gamers can also indulge in BoxCar’s extensive food and drink menu. Bartenders in tie-dye shirts rush to concoct cocktails and pour craft beers as patrons shout orders from the hundreds of options written in colored chalk on the board behind the bar. The autumn specials menu includes Falling Leaves Old Fashioned (made with Bumbu Rum, brown sugar, maple syrup, bitters, and a dash of cinnamon) and an Apple Cider Mule (made with Tito’s Vodka, apple cider, sour apple pucker, Rose’s lime juice, and a splash of ginger beer). 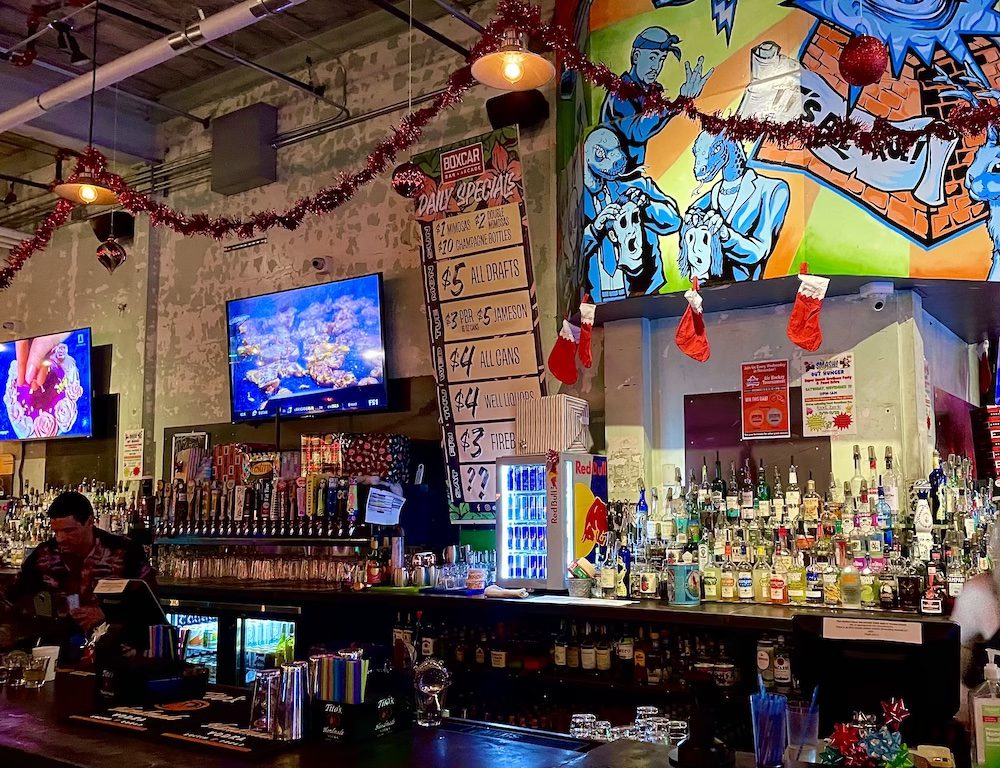 On the opposite side of the arcade, customers order prosciutto arugula, mushroom truffle, and Carolina hot honey pizza pies fresh out of the brick-fired oven. A woman sneaks a bite of her husband’s cinnamon-sugar jumbo pretzel when he isn’t looking. A terrier seated at his own high-top chair steals a pepperoni off a pizza slice when his owner isn’t looking.

As the night goes on, gamers take their food to the outside patio. A few take up games of outdoor bowling and corn hole, but most sit around the fire pit to keep warm. Local singer-songwriter Adam Decker launches into his set. When he strums the opening guitar chords to his original single “December,” people get out their phones and turn on their flashlights, swaying back and forth while holding their human and four-legged friends. Decker finishes his performance around midnight to enthusiastic applause. 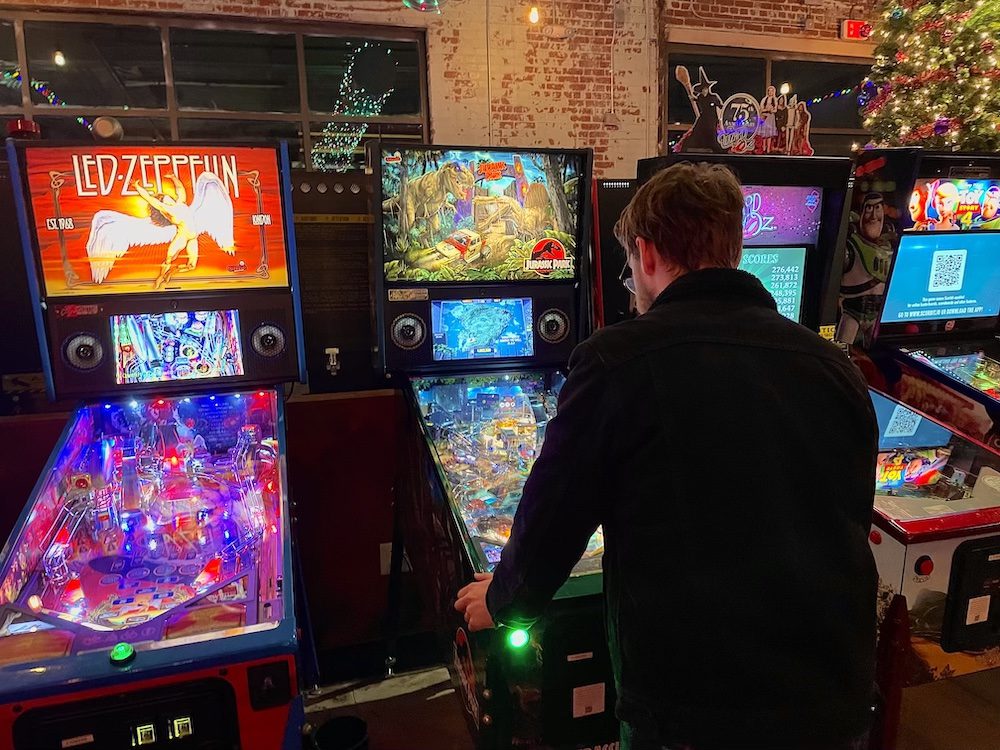 The miniature concert’s audience heads back inside as the night breeze kicks up. Some customers play final rounds of their favorite games—it’s their last time that night to shriek “I won!” Others stop to admire local graffiti artist J Massulo’s murals of fantastical tigers and astronauts space-walking on the worn, red-brick walls. On their way out, nearly everyone stops to add a can of food to the ever-growing donation pile at the end of the bar—a part of BoxCar’s month-long charity event, Smash Out Hunger.

As patrons and their pooches head home, employees clear tables and close up the bar to prepare for tomorrow night’s fun.

Above: Scenes from BoxCar Bar and Arcade. Photos by Gwyneth Bernier — The 9th Street Journal

Published in A Moment in Durham and Life in Durham