Home » ‘Empowering people to tell their own stories’: DJ Rogers on being Durham’s first Poet Laureate 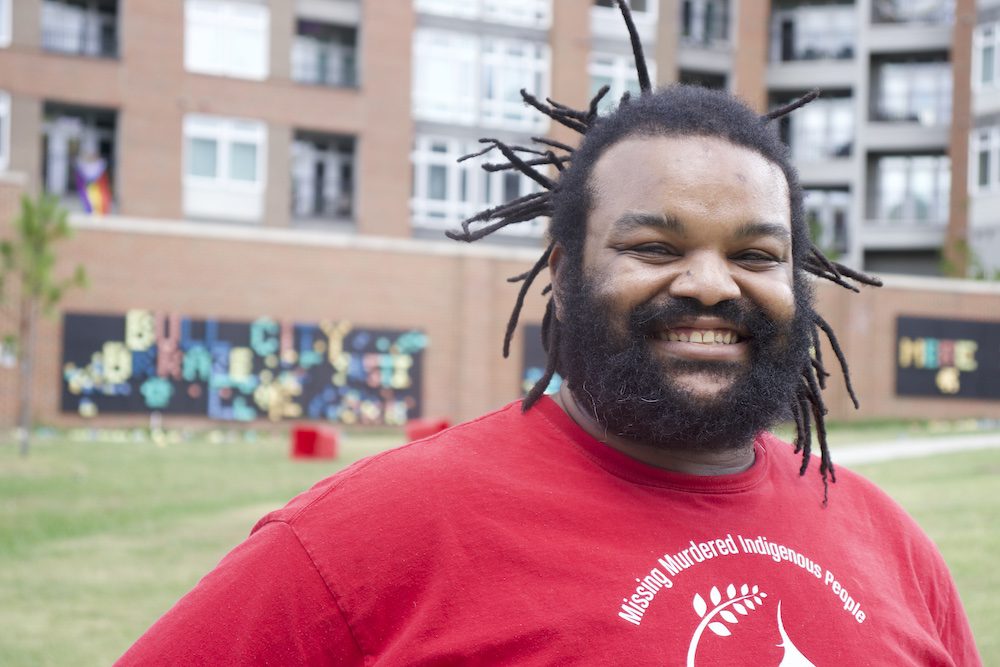 ‘Empowering people to tell their own stories’: DJ Rogers on being Durham’s first Poet Laureate

When DJ Rogers was 9, he could not read fluently. Rogers’ ADHD made it nearly impossible to get through long texts, his attention span waning too quickly to finish a page. Medications did nothing but put him to sleep. Growing up in South Raleigh as one of 14 children and lacking accommodations for his disorder, he felt like school was a place where he could never succeed.

In the third grade, Rogers’ teacher, Mr. Peterson, and his assistant, Ms. Cook, saw an opportunity to change Rogers’ experience. The two approached the struggling student with works by famous poet and activist Langston Hughes.

Suddenly, things clicked. The pieces were creative and eloquent, but short enough for Rogers to read without losing focus. He pored over the stanzas, learning words and phrases and structure and prose. Soon, he taught himself to read and write poetry of his own.

“Seeing that there were writings in a book that were this long was incredible to me,” Rogers said. “I was like, I can do this.”

To this day, poetry shapes Rogers’ language–and now, he will bring that language, passion, and talent to the public as Durham’s first Poet Laureate.

The Durham City Council announced his one-year term, beginning on July 1, as a leader in the arts and culture community on June 22.

Just over one year ago, a group of local poets–Dasan Ahanu, Crystal Simon Smith, and Chris Vitiello–went to the City Council’s Cultural Advisory Board to propose the creation of the position.

“I feel like there’s been some splintering and loneliness among the poetry world,” said Vitiello, who has been part of the Durham poetry scene for almost 30 years. “I think to have a publicly recognized poet doing public events is a good point of conversation for the arts to gather around and for writers to find each other.”

The Poet Laureate will bridge the gap between Durham and its poetic arts scene by bringing the  craft to the streets and the schools. Beyond writing commemorative poems for Durham events, Rogers will showcase his work through readings in the community and lead educational opportunities to encourage arts involvement across the city.

“I wanted [the Laureate] to not just be someone who kind of sits in the studio or writing studio and writes poetry and publishes books,” Smith said. “I wanted somebody who was going to bring poetry into our various communities, particularly our vulnerable communities, and use that tool to bring us together.”

Rogers’ quiet, calm presence would make anyone comfortable. He speaks in sentences with no clear ending, figurative language embellishing his ideas like flecks of gold. Narrative and prose poetry flow out of him naturally. Poetry is the foundation of his speech and thinking, and it is how he tells his own story.

A University of North Carolina-Chapel Hill graduate, Rogers, 33, has been involved in teaching, activism, and the arts for over 12 years. His first experience with teaching came when he helped to found Building Bonds, Breaking BARS (Barriers Against Reaching Success) in his junior year of college. This group raised awareness of the African-American male school-to-prison pipeline. Its members also went into juvenile detention centers to work with youth, teaching subjects such as black history to help spread knowledge of subjects typically overlooked in school systems.

Rogers, a tall man with long hair and a full beard, began his journey as a teaching artist after he graduated in 2011. He helped form a slam poetry team at UNC called the Wordsmiths. The group trained for regional and national competitions of spoken word performance. Rogers served as an “idea generator” for the new group, he said, and a coach for the budding poets.

Former Wordsmiths managing director Kat Tan, 25, explained that Rogers always encouraged his students to embrace the full scope of themselves. “I think the biggest thing for me,” she said, “is that he took my perspective seriously.”

She worked with Rogers for three years in the group while he was community advisor. “He reminds me a lot of a preacher sometimes, and that is something elevating,” the medical school student said. “It does inspire you to see how you might play a role in a larger story.”

“I love slam because it does encourage people to write,” Rogers said, “and that is one of my goals—I want people to be writing and to generate work, to take their ideas and bring them to the audience.”

Rogers worked with the Wordsmiths from 2011 to 2020 (when the national poetry slam competition was put on hiatus due to the COVID-19 pandemic). At the same time, he introduced teens to the creative arts through projects like the Street Scene Teen Center and the group Sacrificial Poets.

The nonprofit Sacrificial Poets uses poetry to develop artistic and personal growth in youth around the Triangle. Rogers, as executive director and teaching artist, co-led workshops with youth in middle and high schools as part of the Chapel Hill-Carrboro City and Orange County Sschools’ Boomerang program. The program works with students suspended from school and provides them the opportunity to make up lost credit hours with development classes and activities, one being Rogers’ poetry activities.

“I worked with a lot of students who were having a lot of issues pertaining to their home life or mental health,” Rogers said. “They had written these poems that were brutal to read and listen to. But they were the story that they needed to tell and being able to do so allowed them to feel heard and listened to in a way that fostered communication between them.”

Much of Rogers’ philosophy of teaching poetry stems from this idea of self-expression. “Empowering people to tell their own stories,” he said, “is something I’ve seen be transformative for people of all ages and walks of life over my years of doing this work.”

His experience with Sacrificial Poets revealed to him his passion for teaching, he said. Rogers has taught at multiple schools and now works as an instructional coach and teacher at Art of Problem Solving, a national virtual program, providing administrative guidance for the school’s English teachers.

“I wasn’t someone who grew up knowing that I wanted to be a teacher, educator, or artist,” Rogers said. “I was just somebody who tried to find my niche and also tried to build a future where I could then use what I had to help other people.”

In his piece, “I would love to applaud but I am too tired,” he writes:

To be a black man

a thing that holds others’

Every one of us that dies

not a ghost, a needle.

He plans to use his new position to develop poetry and creative workshops in Durham’s housing projects. Residents of the projects are often forgotten, said Rogers, but they have just as much art to share as the rest of the city. He hopes that as laureate he can bring recognition and resources to those communities and others so they can tell their stories.

“I don’t want to find their voice, because they already have it, but to engage with them in a new way, to say ‘This is how I want to tell my story.’ To say ‘This is important to me because I was here and nobody can take that away from me.’ Just to say ‘I’m here now—nothing’s gonna change that.”