Home » A Durham Moment: ‘Instead of cake, we’re having ice cream.’ 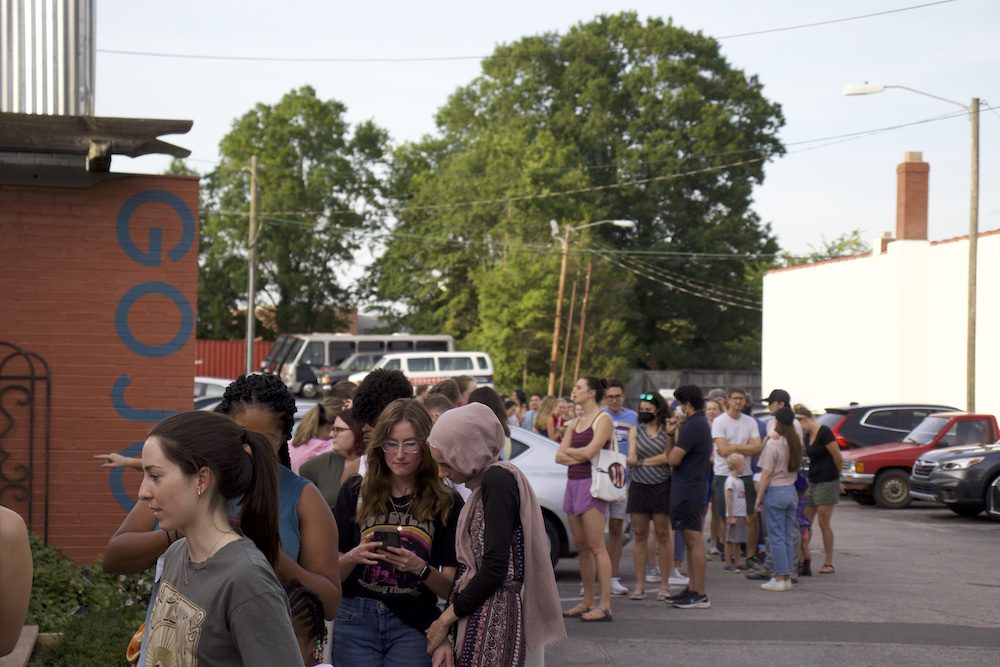 A Durham Moment: ‘Instead of cake, we’re having ice cream.’

The sunset is hazy above the downtown skyline, and the heat still beats down on the asphalt street. The humidity isn’t choking, as it usually is in North Carolina summers, but it is certainly hot enough to warrant a trip out for ice cream with family and friends—especially when it’s free.

It is the summer solstice–June 21st–but more importantly, it is Jeni’s Splendid Ice Cream’s annual First Day of Summer Party, awarding a free scoop to those who join their rewards program. The famous ice cream franchise recently opened its first Durham location in the Brightleaf District, and so tonight is its grand opening, too.

At 6:55 p.m.,the line already wraps around the building, and through the parking lot. The store is typically hidden from the street, tucked away behind Goorsha Ethiopian restaurant and around the back of Shooters II nightclub. The only evidence of its presence are the ceiling string lights that decorate its outdoor seating area and the tips of illuminated letters spelling out the store’s name poking up above the buildings. Tonight, however, the shop has drawn a crowd visible from down the block. And it isn’t even open yet.

Children dart about like dragonflies, weaving through the clumps of customers-to-be and making new friends, as children typically do. They ask their parents, who wait lazily in the heat, why the ice cream is taking so long, naïve to the fact that tonight is a special night.

The first 50 customers in line receive placards to commemorate their punctuality and dedication to the noble cause of free ice cream, and standing proudly with number one is Hadja Thiam. 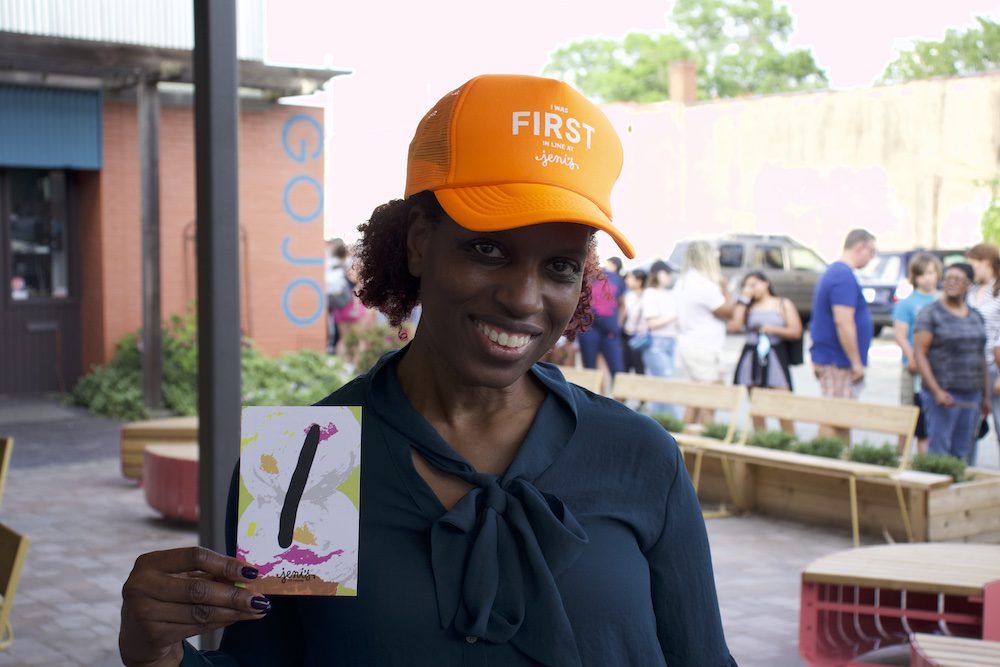 Hadja is a connoisseur of the company’s gourmet ice cream. Hadja, a nurse practitioner at Duke University, was hooked on Jeni’s the instant she tried it. With the closest store all the way in Charlotte, however, she was left with no choice but to order herself pints once (or twice) a month from the company’s website. They would arrive on her doorstep in large orange boxes, surrounded by dry ice like jewels in a treasure chest of gold.

Now, with the opening of the Durham location, Hadja only has to travel a few steps beyond the doorstep. Store employees crowned her with a bright orange trucker hat, emblazoned with white letters reading, “I was first in line at Jeni’s!” And at 7 p.m., when the doors open, Hadja jumps right through, pumping her fists triumphantly.

As the night goes on, the line only gets longer. The promise of a free single scoop (usually $5.95 a pop) draws ice cream fanatics from all over. Claire is number 6 in line, and she traveled from Carrboro just for the event. Toni, number 12, drove from Cary to visit the location where her son works, and for the chance to try some new flavors. The deal even captured the attention of blue-haired Astrid, number 49, who claims to be loyal to East Durham’s Two Roosters Ice Cream. However, even the most loyal can be turned.

“The coffee [flavor] is literally out of this world,” raved Astrid about “Coffee with Cream and Sugar.” “Like, I don’t understand how it is so good. It’s not like any other coffee ice cream I’ve ever had.”

Jeni’s was originally founded in Columbus, Ohio, in 2002 by entrepreneur and ice-cream-queen Jeni Britton Bauer. As of 2022, it has expanded to 19 cities, from Durham, to Houston, to Tampa, to Nashville, and so on.

The franchise prides itself on its handmade ice cream with unique flavors. Some fan favorites include Brown Butter Almond Brittle, Pineapple Upside Down Cake, and Sweet Cream Biscuits and Peach Jam.

The company does have some custard competition in Durham. Places like Two Roosters and the Parlour have local loyalists that could be turned off by the fact that Jeni’s is a chain and a newcomer to Durham. Corporate employee Dan Sierzputowski claims they have had no such trouble, though. “It is a great town,” said Dan, dressed in a green Jeni’s T-shirt and a gleaming smile. “The city has been welcoming to us, customers have been welcoming to us. We could see the town was just exploding.”

As darkness falls, the air cools, but the party is still heating up. For three hours, the line snakes around the patio to the back of the parking lot. By 8:30 p.m., about 150 people crowd the block. The limited outdoor seating, an amalgamation of abstract-style benches and quaint wooden tables, forces some customers to enjoy their ice cream standing or in the popped trunks of their cars.

Dogs pant out the nighttime heat in the parking lot, some being lucky enough to get their own whipped white desserts to devour. High school girls gossip in between licks of Lavender, old friends catch up over a cone of Chocolate Sheet Cake, parents take a break with Brambleberry Crisp while their toddlers gorge themselves on Gooey Butter Cake. The night is still young. 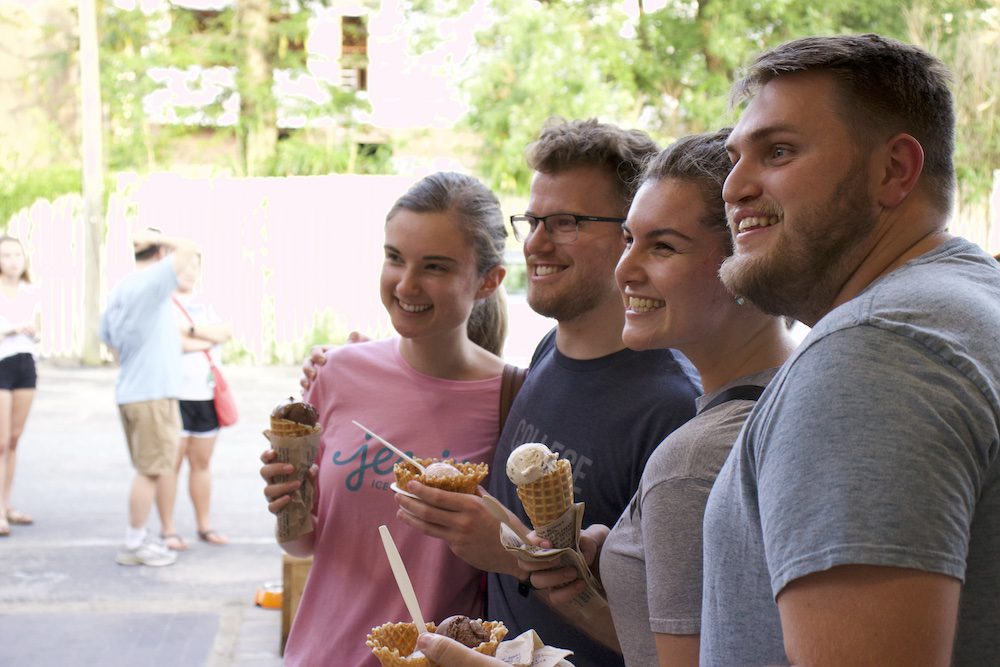 Standing at the corner of the patio are Matt and Kara. She sports a pink Jeni’s shirt and has been buying pints of the stuff at Whole Foods for years, ordering online when she can’t get to a store. Matt, Kara’s fiance, noticed this passion and took it to the next level for his partner. When he asked Kara to marry him, he brought Jeni’s along.

The lovebirds ate cups of the sweet dessert after Kara said yes, and even took their engagement photos outside the original Jeni’s in Ohio. The two are finally tying the knot this weekend at a North Carolina beach, but they plan on pushing the boundaries a bit to honor their love (of ice cream).

Above (from Top): Crowds await a free scoop; Hadja Thiam is first in line; and Matt and Kara united over ice cream. Photos by Maddie Wray — The 9th Street Journal