Home » ‘It can happen to any one of us’: Gathering remembers cyclist killed in hit-and-run 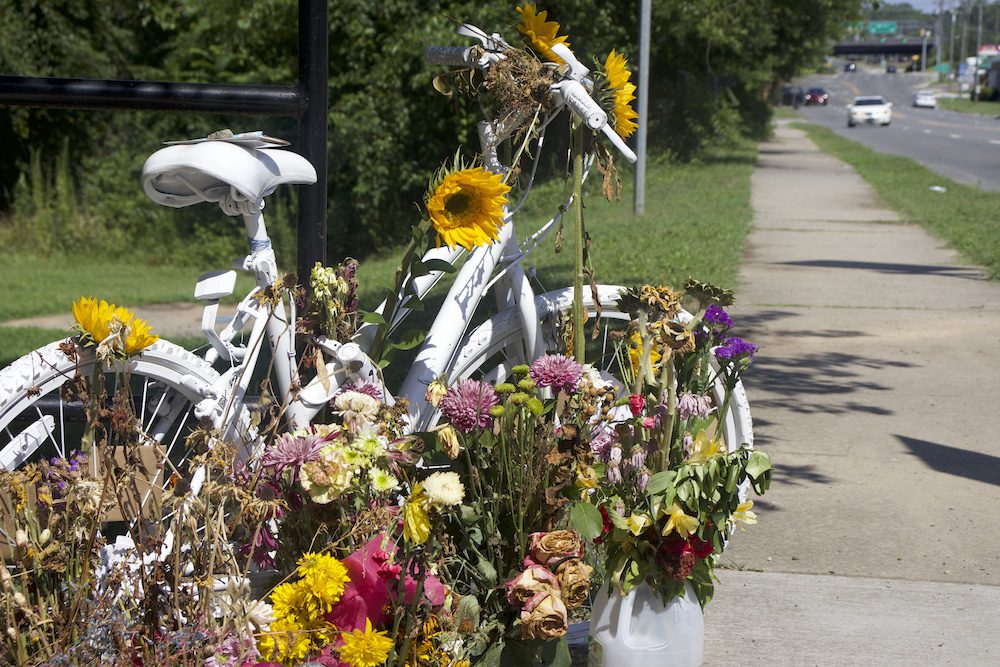 ‘It can happen to any one of us’: Gathering remembers cyclist killed in hit-and-run

At 10:30 a.m. on July 24, the quiet of Westover Park was broken by the sound of bike chains churning. Cyclist after cyclist began to appear, hauling  bikes from cars and  emerging from side streets and trails.

A young man walked his bike over the hill into the crowd and patted a friend on the back. “How you doing, man?” he asked. His friend sighed and gave a strained smile.

At the top of the hill, at the Guess Road crosswalk, stood a white-painted bike. Flowers embellished the spokes, and notecards with well-wishes were pinned to the wheels. Candles and makeshift vases made out of water jugs blanketed the sidewalk under the bike.

The ghost bike is a memorial for Matthew Simpson, a Durham cyclist killed in a recent hit-and-run.

Simpson, 40, was on a morning ride home on July 10 from the Museum of Life and Science with his wife, Allison, and their two children when he was struck by a driver. He later died from injuries. The incident occurred on Guess Road, which cyclists must cross while riding the mostly off-road West Ellerbe Creek Trail.

Bike Durham, a local nonprofit that advocates alternatives to automobile transportation, rallied the local cyclist community for a memorial “ride of silence” on July 24 to honor Simpson’s life.`

Like many of the attendees, local cyclist Scotty Mathess did not know Simpson personally, but that did not stop him from showing up to the memorial. “I didn’t know Matt, but anyone who’s in the neighborhood uses this crossing—kids, parents, the elderly—so when you know that it can happen here, you know it can happen to any one of us.”

By 11:15, the sun glinted off dozens of plastic helmets and sunglasses as volunteers milled through the circles of people, handing out neon yellow visibility vests and black armbands. Cyclists typically wear these bands as a symbol of solidarity and mourning while they complete their silent ride. 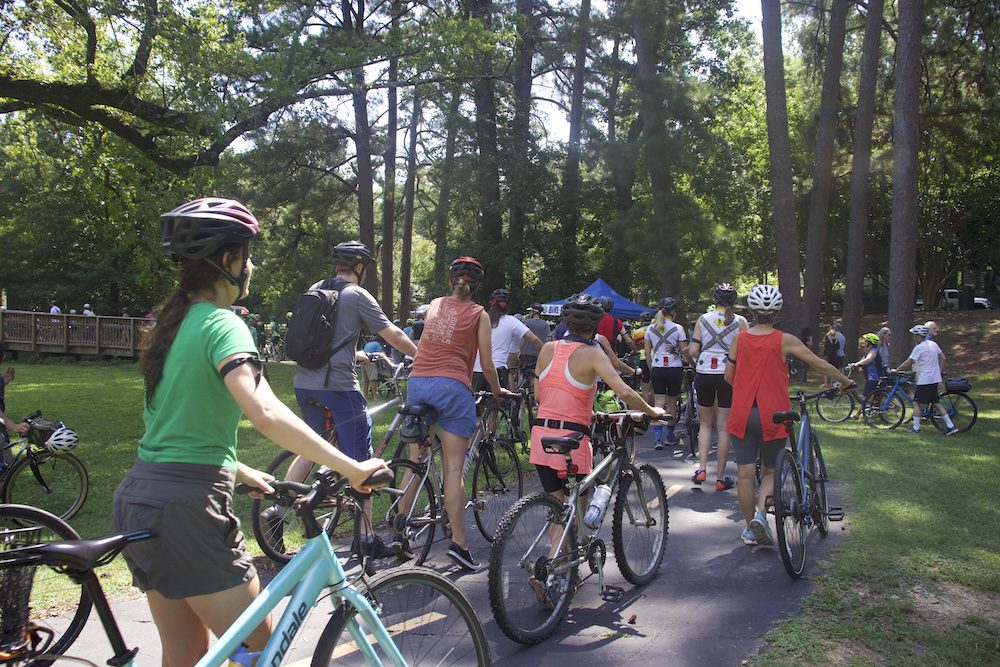 Near the crowd, a line stretched across the small wooden bridge leading to the bike memorial. People holding armfuls of candles, flowers and ribbons knelt before the ghost bike, lost in prayer or remembrance.

Allison Simpson took her turn at the bike in silence, eyes closed and tears streaking her face. An older couple stood at her right and left, ready to walk her back into the park, arm-in-arm.

As the crowd gathered back together, Tallmadge held up a small thin microphone and  the chatter quieted.

Talllmadge’s low voice echoed faintly through the park as the crowd stood still, with bikes by their sides. “It’s important to come together in moments like these,” he said, “to share in our grief and lean on one another in support.” Allison Simpson then took the microphone from Tallmadge.

Simpson was an engineer, originally from Easley, South Carolina. He met Allison in Washington, D.C., before the two moved to Durham in 2014. He was an avid hiker and cyclist, as well as a musician. They became partners in 2006 and married in 2014.

He was a dedicated father to their children Wallace, 4, and Matilda, 22 months, she said.

“I wish everyone here could know him fully,” she said, glancing up at the crowd. “I hope that we can work together to honor his life, the beautiful life that he lived, and also to keep our community safe, so that we can all enjoy it.”

Allison gingerly returned the microphone to Tallmadge and walked back amid muffled sobs to the small pocket of friends and family waiting for her with arms outstretched.

Simpson’s death has sparked fear and anger in the cycling community, with many taking to neighborhood listservs and Twitter. Some, like Mathess and Beth Doyle, called for infrastructure changes like a raised crosswalk or a full stoplight at Guess Road, where the accident happened.

Attendees of the memorial ride echoed those sentiments.

“Until the physical environment is redesigned and rebuilt to separate high-speed motor traffic from vulnerable road users, it’s just gonna keep happening. No end in sight,” said Mathess in an interview at the gathering.

Others like Stephen Mullaney, a Bike Durham staff member, condemned the culture of drivers that teaches a lack of respect for cyclists sharing the road.

Drivers should take responsibility if they injure a cyclist or pedestrian, he said in an interview, despite the possible consequences: “If it’s an accident, stop and help.”

After words from Simpson’s college friend and a member of GoDurham, Tallmadge instructed the group of 146 to prepare for the ride.

They began by crossing Guess Road at the site of the accident. The ride continued for three miles, Tallmadge said, passing the Simpson home on Virginia Avenue before returning to Westover Park.

As the group passed the Simpson home, they waved to Allison and her two children, he said. A chorus of bike bells filled the air as they rode past.

Above (from top): A ghost bike memorializes cyclist Matthew Simpson, who was killed in a recent hit-and-run; cyclists participated in a memorial ride to remember Simpson on July 24. Photos by Maddie Wray — The 9th Street Journal