Home » For Erwin Road cyclists, the question is where to draw the line 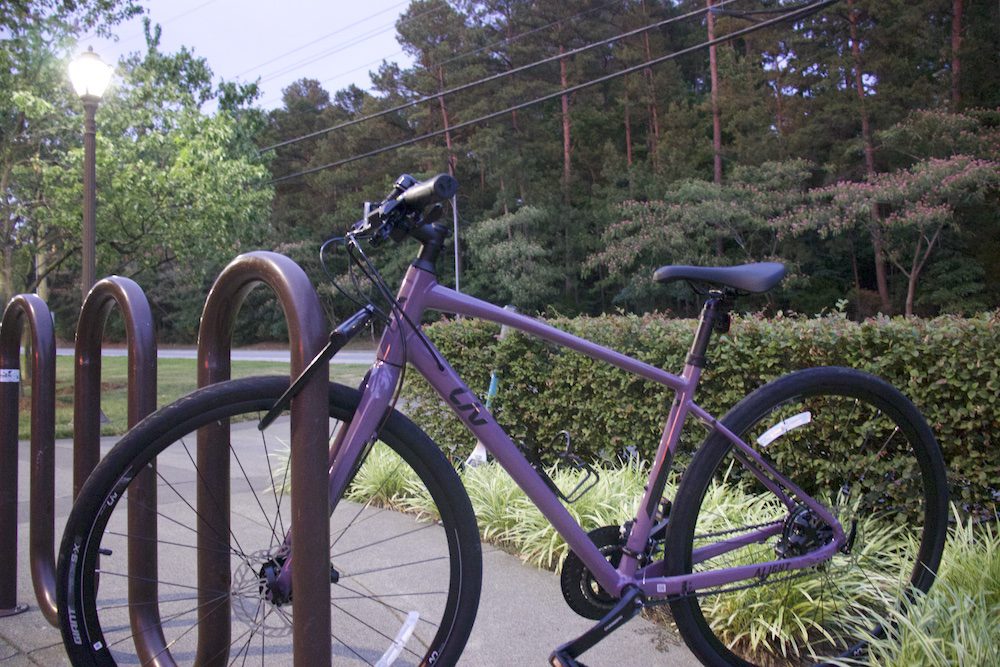 For Erwin Road cyclists, the question is where to draw the line

Cars zip past the small sidewalk, blurs of metal and exhaust. Pedestrians run across streets, and sidewalks appear to be an afterthought. Five lanes of traffic screech to a halt at one stop light, drivers fuming impatiently as they wait to hit the gas. Bikes pedal furiously in front of cars driving far too close for comfort.

Along other roads, simple white lines separate tons of speeding steel from riders protected only by plastic helmets and their own cycling skill. The presence of bike lanes may seem like a no-brainer. But along Erwin Road, where bike lanes are a rarity, painting those white lines is not so simple.

Starting this week, Erwin Road is being resurfaced from Main Street to Cameron Boulevard. The resurfacing gives an opportunity to create new bike lanes, pedestrian crosswalks, and other alternative transportation lanes by restriping the road. But the decisions rest in the hands of the North Carolina Department of Transportation (NCDOT), which owns and maintains the road, along with other heavily traveled arteries.

And the clock is ticking on the resurfacing design plans, due by the end of August.

Erwin Road has long been known as a dangerous corridor for walkers and cyclists, with 45 pedestrian and 10 bicycle crashes over the last 14 years. Transportation advocacy nonprofit Bike Durham and other concerned cyclists hope to get their wheels in the door by pressuring the city and state to address their many concerns about bike and pedestrian safety.

Dismounting from their bikes after their weekly Thursday night ride on Erwin Road, a group of Bike Durham cyclists congregated over picnic tables, bemoaning cycling issues over their post-ride meal: wings and fries from Heavenly Buffaloes.

“I’ve had a number of incidents where people coal-roll me,” said James Nishimuta, a former board member of Bike Durham. Scotty Mathess, a local cyclist sporting a baseball cap reading “One Less Car,” groaned.

“Coal-rolling,” they explained, can happen when cyclists approach a diesel truck. A truck driver presses a button to release black fumes onto a biker behind them as a sort of punishment for sharing the road. Bikers are engulfed in a cloud of smoke, coughing and unable to see.

And coal-rolling is not the only danger cyclists face. Nishimuta recounted the time when he was riding to the Eno River with his children on small backroads.  A driver close-passed him and laid into his horn, shouting “Get the f*** off the road!”

“Do you know how loud horns are when you’re outside the car?” Mathess chimed in. The others nodded in agreement, solemnly dipping their fries into the ketchup.

Bike Durham’s goals include “zero fatalities, zero disparities in access, and sustainability,” said the group’s advocacy director Erik Landfried. But Bike Durham isn’t the only player in this game. 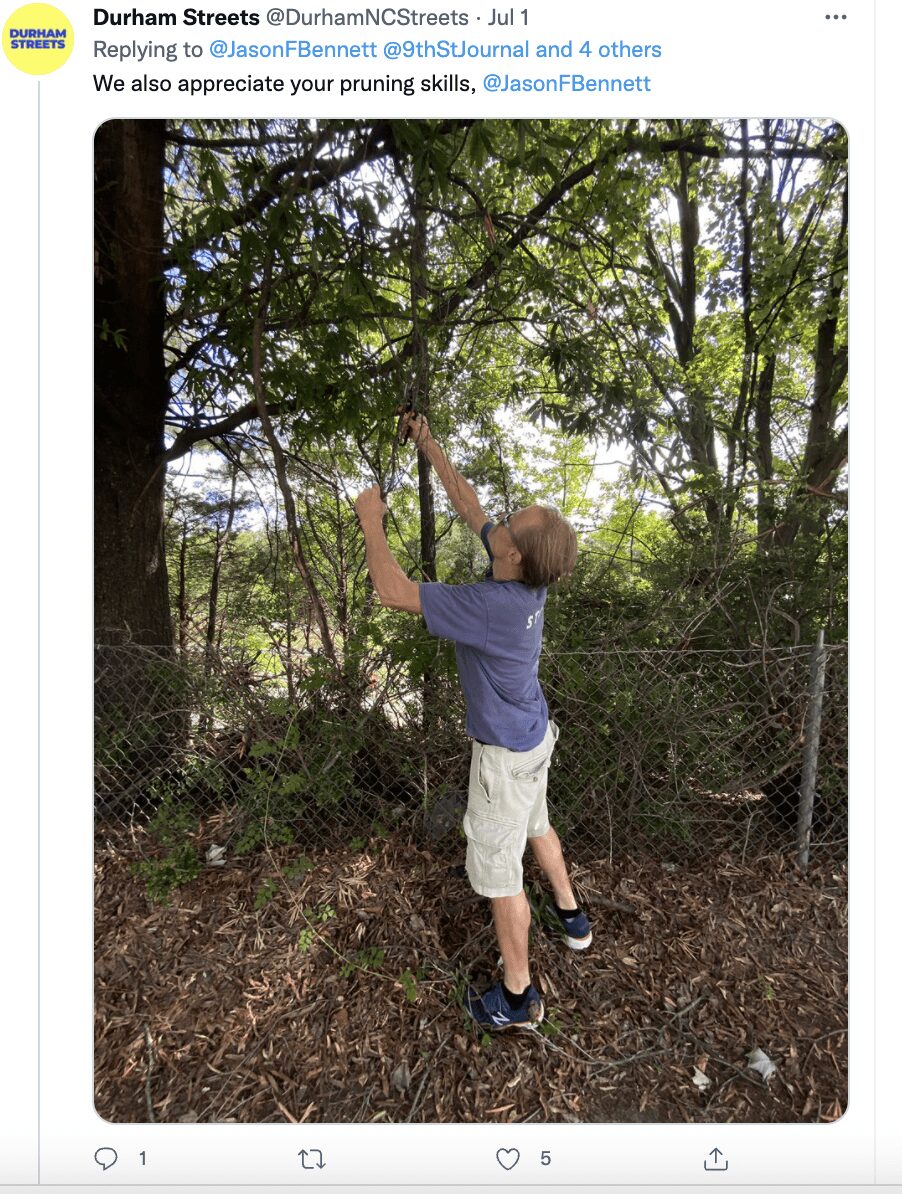 The Erwin Road resurfacing plan is part of NCDOT’s five-year resurfacing program, which funds  the state road maintenance on a 5-year basis.

The City of Durham is charged with reviewing Erwin Road and developing ideas for new surface design and traffic signals, and the state will repave guided by those recommendations.

However, the state’s five-year resurfacing program only pays for basic maintenance; it does not include funding for projects beyond the existing curbs. That means cyclists’ hopes for sidewalk repair and construction of multi-use off-road paths are not on the docket during the current repaving, said DOT district engineer John Sandor.

“It’s a possibility, but it would have to come with a different project, not a resurfacing project,” Sandor said.

Despite those roadblocks, the city still hopes to accommodate alternative transportation as Erwin is repaved.

“We’re looking at the different scenarios where we can improve the operation to provide greater convenience or safety,” said Brian Taylor, transportation planner for the city. “For someone who’s riding a bus, maybe helping their bus arrive on time or if they’re riding a bike, actually have a bike lane or protected bike lane, or improving a crossing, whether that’s maybe making it a more visible crossing and reducing maybe a turning radius.”

But until DOT approves the resurfacing designs, the scenarios proposed by the city are not guaranteed.

The city originally proposed creating business access travel lanes, which are lanes designated for buses and cyclists. The lanes speed up bus transit by giving buses their own lane to move freely outside of automobile traffic. Those lanes also can be used by cyclists, removing them from the path of cars.

However, DOT has specific traffic capacity guidelines that city recommendations must follow. A city consultant’s traffic analysis in May found that the shared bus and bicycle lanes would increase auto congestion beyond those guidelines and the proposal was sidelined.

“[The road] functions poorly today,” said Sandor. “There’s no spare capacity to give up without having tremendous impacts, and those will be negative.”

After that, many cyclists turned their attention to making smaller improvements on Erwin Road where they can, at least for now, said Landfried.

On a recent morning, the group met at the Old West Durham Cocoa Cinnamon, a local coffee shop with origins as a mobile coffee shop called bikeCoffee. Co-hosts Arleigh Greenwald and David Bradway welcomed five other attendees, most of whom rolled up on their bikes.

The group drew people of all ages and occupations; local bike-tivist Greenwald, wearing a cap emblazoned with her Twitter handle, “Bike Shop Girl”; Bradway, a Bike Durham member working at Duke University with a Ph.D, in biomedical engineering; Langston Alexander, a Duke master’s degree candidate; aspiring cyclist Karen Singleton from Cary; and Bennet, a loyal Bike Durham supporter. They sucked down iced coffee in the heat amidst debate over the possibility of sustainable transport in Durham.

Bikers have long complained about the lack of bike lanes on Erwin Road, which endangers even those cyclists who are brave enough to ride the road, they said.

“I know a lot of people that would bike to school, but they don’t because it’s intimidating, and it feels unsafe for them,” said Alexander, “which makes sense because there’s no bike lanes.”

As the ice cubes in their coffee melted, the group dug into the topic of strategy. “When you look at any movement or policy change,” said Greenwald, “you have to look at the dominoes—and which domino needs to fall.”

The cyclists are determined to make sure the city considers alternate forms of transportation in design plans for the road. And as the city moves into the public engagement part of its design process, things seem to be looking up.

“One of the things that we heard a lot on Erwin is that [city officials] haven’t heard otherwise. Nobody is complaining, nobody’s asking for better,” Greenwald said.

The city would like to move towards more sustainable transport, said Brian Taylor, the city transportation planner. In the case of Erwin Road, restriping may be the best option for now, he said. “They might be modest improvements because this is an NCDOT road,” Taylor said. “but we’re hoping to see some improvements for people bicycling, people crossing Erwin Road, and people riding the bus.”

Real change may take longer. But for the cyclists, the fight is still on.

“It’s a mindset of cars first,” Landfried said, “and we reject that notion.”

On a recent morning, Greenwald led a walking audit of Erwin Road, to spot issues with the corridor and report them to the city. She snapped photos on her iPhone of cracked sidewalks,  skinny and scant bike lanes, and dirt covering walkways (which Bradway had spent an hour shoveling two nights before). She uploaded each into Durham OneCall, an app where citizens can report service requests.

Behind her, sustainability advocate Jason Bennett pulled out a pair of gardening shears and began hacking at the branches that extend over the sidewalk, blocking the path for pedestrians and cyclists. The sun glinted off the blades as he completed the work he wanted to see done.

Above (from top): A bike rests in a rack along Erwin Road. Photo by Maddie Wray — The 9th Street Journal; Bike Durham member Jason Bennett trims branches along an Erwin Road sidewalk. Photo from the Durham Streets Twitter feed

Published in Life in Durham, Local government and Public safety