Home » As the city eyes expansion, county residents push back 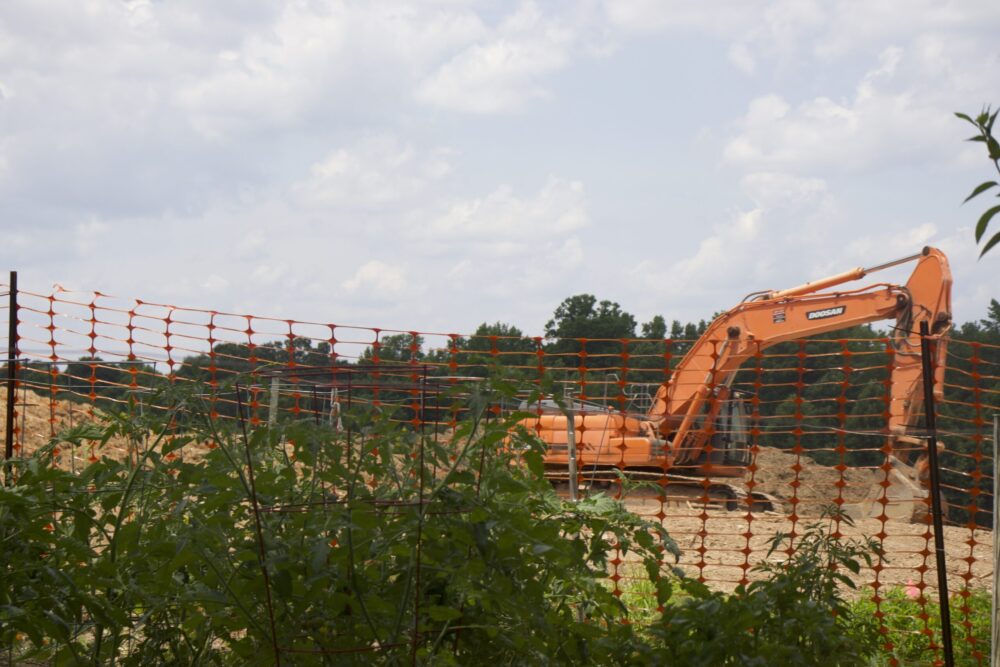 As the city eyes expansion, county residents push back

Sherron Road. Doc Nichols Road. Baptist Road. Olive Branch Road. These roads run through  southeast Durham, connecting small townships and farms, overhung by pine branches. Quaint brick homes and churches sit nestled in the forest, near elementary schools and fresh produce stands. But along the shoulders of the roads, orange zoning notices dot the tall grass like a new species of flower, and landscapes fade from green forest to orangey-red dirt, topped with rolling hills of mulched trees. Bulldozers graze in the fields, and pink flags mark the sites where construction blasts will next rattle the backyard wind chimes.

Unfortunately for the folks who prefer the quiet life, it looks like rural Durham is next up to be devoured by urban sprawl– but not if the new group Preserve Rural Durham can help it.

The comprehensive plan guides what can be built where in Durham, and most importantly to a Preserve Rural Durham, determines the city’s Urban Growth Area boundary. A new plan is long overdue, as the most recent iteration was written in 2005, 17 years ago. In a place as rapidly growing as Durham, 17 years is a long time.

The last comprehensive plan recommended expansive development into rural areas to help ease the housing crisis. The new document includes many of the same goals. However, Preserve Rural Durham has a different vision.

The nonprofit, founded by retired science teacher Pam Andrews in February, is dedicated to protecting rural areas of Durham that are threatened by the region’s rapid development, particularly southeastern Durham County. The June 9 meeting is part of a series of meetings Durham planning staff are holding to discuss the comprehensive plan with rural residents and others.

On Thursday, attendees trickled into the wood-paneled meeting room at the Ruritan Club, many clad in green and tan t-shirts emblazoned with the words “Preserve Rural Durham.” Before the meeting, the core team, made up of Andrews, her husband, and other volunteers ranging from young farmers to retired scientists, invited attendees to sign up for the group’s weekly e-mail listerv and to pick up the bright green and yellow yard signs  protesting development. (“John Deere-colored, so you can see them driving by!” said Andrews.) 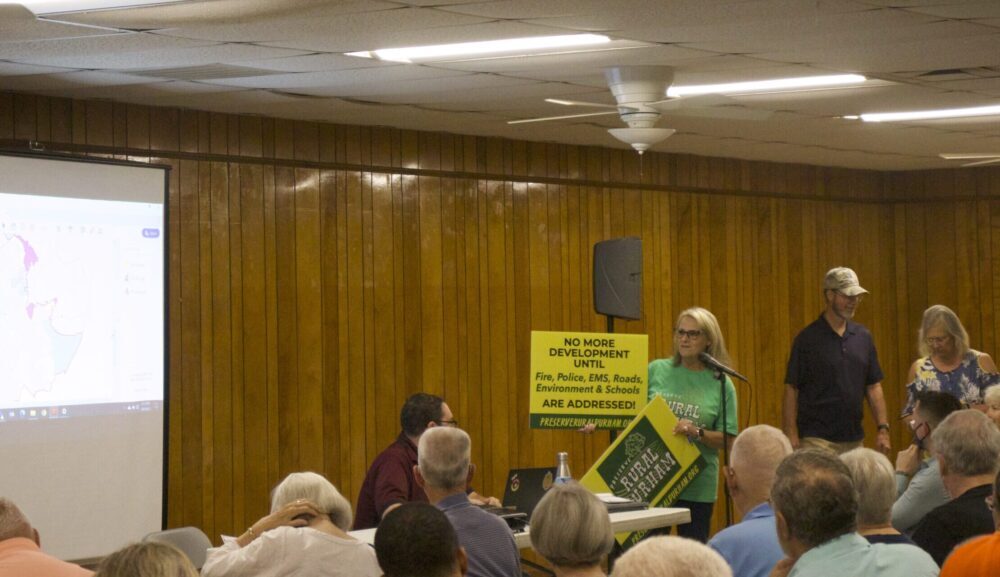 Whiteman began the meeting by sharing a statistic. The planning commission predicts the county’s population will increase by 130,000 by 2050, he said. That expected growth is fueling the need for rapid expansion, and southeastern rural Durham has been designated as the best place for this growth, he said.

“You can’t stop population growth,” Whiteman said after the meeting. “There’s no practical way to do that.”

Residents, however, voiced concerns about the proposed expansion, noting the city’s failure to follow its previous comprehensive plan. While that plan called for  “low-density residential development” with two-four units per acre in rural areas, the city instead approved complexes of townhomes with 8-12 homes per acre, speakers said. Higher-density housing is necessary to create affordable housing and to remedy Durham’s current housing crisis, said Whiteman and Cahill. Residents, though, see it as a threat to the natural beauty and quiet space they value.

Attendees said more high-density housing will increase traffic, and they questioned whether southeast Durham has the necessary infrastructure to support more development. Resident Antonio Jones complained that as congestion increases in Oak Grove and neighboring townships, getting to basic necessities like grocery stores and schools has become an ordeal.

“We all know, getting to the Food Lion is a mission at this point,” said Jones.

Some residents also seemed concerned about more than losing their quiet lives to rapid development. Preserve Rural Durham’s mission includes bringing awareness to the environmental impacts of rapid development on surrounding areas, such as Falls Lake. The group has compiled evidence of environmental degradation caused by development, such as what Andrews calls “tomato soup.”

Tomato soup in this context is no delicious lunch to be paired with a grilled cheese—it is red, muddy runoff from construction sites. Often chock full of nitrates and phosphates from bulldozed farmland, the mud flows into Falls Lake and neighboring creeks and provides nutrients for toxic algae to grow and pollute the lake, Andrews said.

The new draft plan includes promises of environmental protection. Yet the city’s previous plan also pledged to protect watersheds and other environments, said former scientist Tom Freeman. Degradation of floodplains and water sources still occurs, he said.“Go out there and look at the land, folks,” he said. “I hope you see a disconnect.” 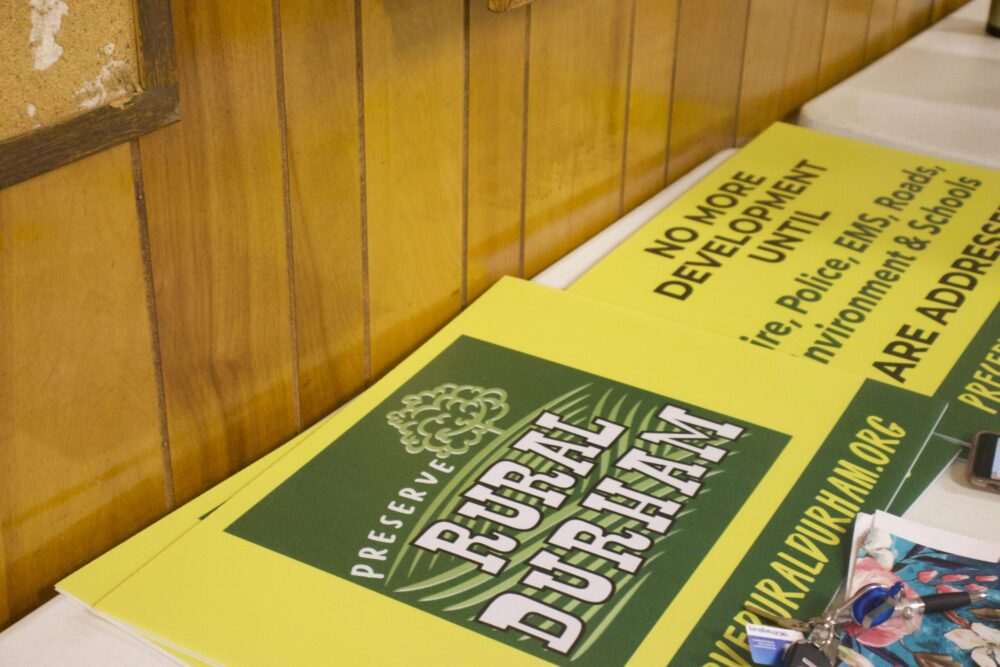 The planning department that is drafting the comprehensive plan serves the city and the county jointly, with county commissioners and city council both given say in matters of zoning and development. However, when land falls within Durham city limits, city council has the final say.

Through “voluntary annexation,” developers can opt to be incorporated into the city limits in order to use city resources like water and sewage. Once a piece of property has been accepted into the city, the city council—not the county commissioners— has the authority to approve or deny zoning. Rural residents, including many  Preserve Rural Durham members, live outside the city limits and so don’t vote for city council. So once a property is annexed into the city, rural residents lose the power to choose who has the final say over development bordering their property.

“We can’t vote for the people who are making the decisions,” an exasperated Andrews said at the meeting, echoing comments by several other speakers.

Cahill and Whiteman acknowledged residents’ frustration, recommending that they use a feedback survey about the plan. Meanwhile, another meeting is scheduled for June 21 at the Bahama Ruritan Club, and on June 23, four more tracts of county land are set to be voted on for annexation. Residents can also offer feedback by attending a virtual session on June 28.

Preserve Rural Durham will continue to show up.

“That’s how things go down in Durham,” said Jones. “Go down there and raise hell.”

Editor’s note: More information about the comprehensive plan is available here. Survey responses about the plan will be accepted through June 30.

Published in Environment, housing and Life in Durham