Home » “A lot of hugs and welcomes”: A year-round school resumes after a (brief) summer break

“A lot of hugs and welcomes”: A year-round school resumes after a (brief) summer break 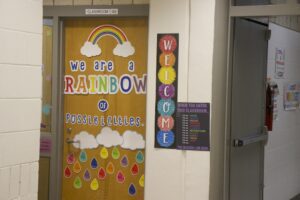 At 7:35 a.m. on July 18, a line of traffic winds down a tree-lined road out to the highway. Impatient passengers peer out the child-locked windows, clutching lunchboxes to their chests with anxious excitement. As they arrive at their destination, the car doors open and children pour out onto the drop-off circle. Parents say (sometimes tearful) goodbyes to their little ones. The students steel themselves for the next six and a half hours, their return to year-round school at Easley Elementary School after five weeks of summer. They take deep breaths, grab the straps of their backpacks, and run inside.

The Easley kindergarten teachers stand at attention by the entrance, armed with smiles and waves waiting to greet their former students. Kindergarten won’t start until later in the week, giving the teachers the freedom to serve as the welcome committee for the arriving first through fifth graders.

As the excited students stumble through the propped-open double doors into the central lobby, they are met with a chorus of “Welcome back! Hello! Good morning!” Teachers and administrators call them each by name and compliment their backpacks and lunchboxes.

“It’s been great seeing all the smiling faces,” says Jennifer Hauser, Easley’s principal since 2015. “It’s a lot of hugs and welcomes.”

As she speaks, a little girl in a pink sparkly backpack (with a matching lunchbox) runs up to one of the teachers and hugs her tightly around the waist, chattering something in the excited language only kids can speak.

The students aren’t the only ones excited to see the teachers. A woman walks two girls through the door, holding them by the hand, when she sees one teacher waiting by the door and her hands fly to her face. She shrieks with  happiness, and the two embrace.

“It’s a really good community school,” Hauser said of the 459-student magnet school, “and it really is like a family.”

Five students weave through a maze of cinder block hallways toward the principal’s office, but they aren’t in trouble. At the end of the hall is a makeshift library, boxes and shelves tucked away in a corner. Principal Hauser pulls books from the shelves too high for the young children to reach.

It is an Easley tradition– “birthday books.” When a student has a birthday, their name is announced over the loudspeaker and they are invited to come pick out a book from the principal’s special library to keep. The first day back from break is special, because all summer birthdays are celebrated at once.

Hauser points out the “first-grade favorites,” like Ramona and Beezus, to a young girl digging through the shelves. A third-grader shyly takes a chapter book from a box before darting off to class.

Back in the hallways, teachers hand off papers and files like batons in a relay, dodging students sprinting to get to class before they’re marked late. No post-summer break rust in these corridors.

At 7:44, the second bell is imminent. A young boy named Sawyer runs up to Principal Hauser, obviously distressed, and stands bashfully with his hands behind his back. “Principal Hauser,” he says earnestly, “You forgot to say the pledge!”

Principal Hauser gasps with dramatic concern and turns to her assistant principal: “Mr. B., we forgot the pledge!”

Jeff Bugajski laughs: “Who reminded you? Was it Sawyer? Of course it was.”

At 7:45, the second bell rings, and suddenly the halls are empty. Many classroom doors are a collage of stickers with the names of students, a helpful tool for lost children looking for their new homes for the year. Amiable clamor emanates from a classroom as a door swings open for a student clutching a hall pass to run to the bathroom.

When second period rolls around, single-file lines of students emerge, hugging close to the walls. Kids wave to each other across the hall,  careful to use their “inside voices.” A teacher walking past salutes the group with a thumbs up,  greeting one student with a sneaky fist bump.

Fourth-grade teacher Daniella Clay’s classroom is freshly decorated. A bulletin board is pinned with colorful posters holding places for “Amazing work coming soon!” The corner library is stocked with books impeccably placed on the shelves, soon to be mussed by the hands of students.  Clumps of desks are covered with brand-new school supplies, some piled in tall towers made by ambitious young builders.

A mural high above the floor reads, “Today is a good day to have a good day!” 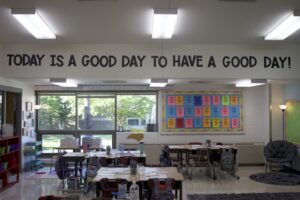 Clay’s new class is in “specials” this period, learning about books and computers. Her bouncing blonde curls and kind smile radiate excitement.

Clay has been preparing for the first day with a team of other teachers and staff, planning activities and ideas to explore with students.

“We want them to feel that sense of community on day one,” she says.

Clay gushes about the community at Easley. She says that the year-round school schedule, used by only five of Durham’s 55 public schools, helps to keep teachers and students close. They are only apart for five weeks in the summer rather than the typical school’s nine.

“All the teachers know all the kids,” says Clay. “We’re all their teachers.”

In Raymond Alban’s classroom, the thrill of the first day has students prattling on, but they quiet down quickly (though still squirming) when Alban says, “All eyes on me!”

Alban, a man with a comforting presence dressed in shorts and a polo, has been a teacher at Easley Elementary for 32 years. He proudly points out those in his classroom he already knows. He has had many of their siblings in past years.  Most notably, in his first year at the school, he taught one student’s mother.

His classroom is decorated with sight words on the cabinets (D is for Determined), and a colorful rug covers the floor where the class has morning meetings and “carpet time.” His 19 students work on coloring pictures of train cars and locomotives. Earlier this morning, they read one of Alban’s annual staples: The Little Engine that Could.

“I tell them, there’s only one thing I ask,” Alban says, “and it is that, just like the Little Engine, they try.”

The first day, to Alban, is vital.There are many standards to establish, like when to listen and how to walk in the hallways, but there are also important things for teachers to make clear.  “The first day is about setting the tone for the class,” he says, “a foundation on how we’re gonna learn.”

For one, Alban promises to never yell at his students. He aims to make his classroom a safe and exciting space for them. If they love school, he says, they will be ready to learn.

When a student asks him for a second coloring page because she cut out her locomotive wrong, he explains another standard: it is always okay to make mistakes.

As the day goes on, the students’ single-file lines get straighter, their binders heavier. But their excited chatter and smiles do not fade– it is still the first day of school.

Above: Bright, upbeat decorations greeted students at Easley Elementary, a year-round school that reopened on July 18 after a five-week summer break.  Daniella Clay motivates her fourth-graders with a sign that reads, “Today is a good day to have a good day!” Photos by Maddie Wray — The 9th Street Journal.