Home » Ardor in the court: a judge and his toys 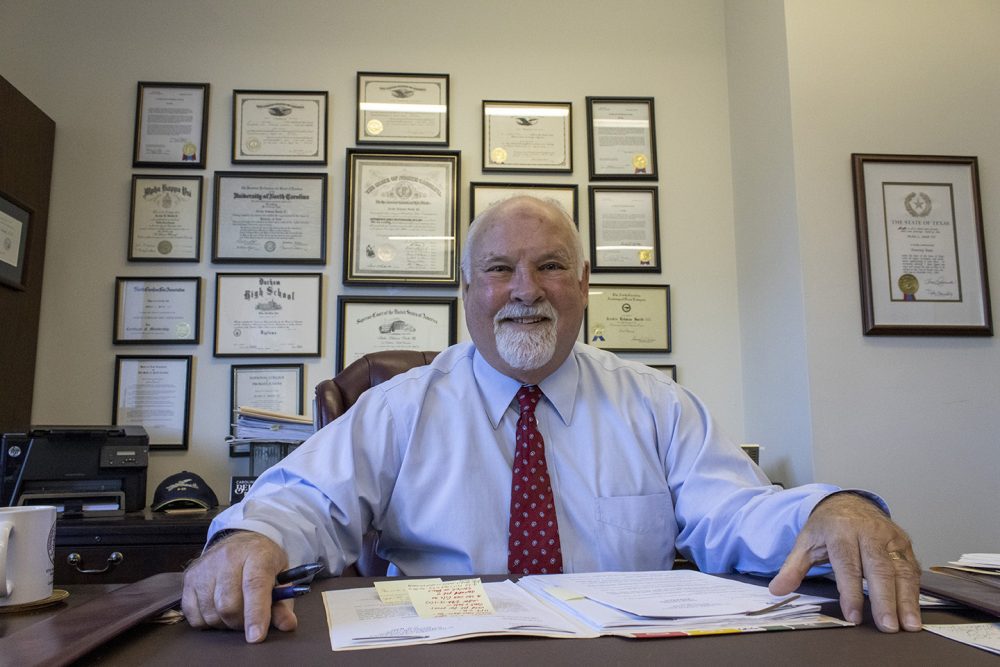 Ardor in the court: a judge and his toys

If someone asked you to picture a judge’s chambers, you might imagine a room from a “Law & Order” episode, with quilted leather furniture, towering wooden bookcases, and draping maroon curtains. You may see an American flag or thick stacks of tattered law books or portraits of old people in scalloped gold picture frames.

You probably wouldn’t picture an extensive toy car collection, a secret candy drawer, or a framed 18×24-inch poster of “The Three Stooges.” But then again, you’ve probably never visited the chambers of the Honorable Archie L. Smith III. Because the first time you walk into the office of this judge and clerk of Superior Court, who has over 45 years of law experience (and white hair to prove it), you might wonder whether he shares the space with a third grader.

On Smith’s wooden desk, a thick stack of papers covered in red annotations is situated right next to a tray full of colorful action figures, among them Snoopy and Smurfette. His deck of business cards, each featuring the great seal of the state of North Carolina, rests beside a tasteful assortment of food-shaped erasers. The wooden plaque with a golden gavel recognizing Smith’s service as president of the state conference of superior court clerks is barely even visible behind his arrangement of magic crystal balls.

And yet, there’s no third grader in sight. Just a gleeful 71-year-old Durhamite who wouldn’t dare take himself too seriously. The way he sees it, if he can refer to his desk as “the command post of the Starship Archie,” why wouldn’t he?

Once you climb aboard the ship, the first thing you’ll notice is Smith’s impressive wall of credentials. A 4×5 grid of various-sized, slightly crooked picture frames, showing off Smith’s degrees, certificates, and awards. It’s not an ego wall, though. It’s a wall of mileposts.

“It gives me continuity with where I am now and how I’ve come along,” he says.

Then, thinking that sounds too serious, he grins and adds, “And what else are you going to do with framed things?”

Below the frames, behind the command post, is another desk which holds Smith’s black Lenovo laptop, open but idle. It’s used for “this and that,” mostly communication. But when it comes to questions of the law, Smith much prefers to walk to the glass cabinet a few steps away and pull out one of 30-plus dark green law books, each dedicated to a different general statute of North Carolina. The books are exhaustive, but in his experience, Smith has found they don’t quite cover it all. So, he’s found alternative methods.

If you came into Smith’s office to discuss a complicated motor vehicle collision, he may ask you to “hold on a sec” while he pulls two toy cars out of a drawer. “Let’s reconstruct the wreck,” he’ll say.

If you begin to cry at Smith’s desk while explaining the details of your case, he’ll most likely reach into his secret candy drawer and hand you a Lindor Truffle. “A little chocolate will make you feel better,” he’ll say.

If you find yourself angry in Smith’s office while talking about how somebody wronged you, he’ll grab a gag voodoo doll from another drawer (How many drawers does this guy have, anyway?) and offer you the opportunity to curse your enemy with “flatulence” or “bad breath.”

If you ask him what’s gonna happen with your case, and he’s not quite sure, he’ll grab a translucent crystal ball out of its ornate golden stand on his desk. He’ll hold it in both hands and gaze deeply into it for a while before looking up at you and saying: “I can’t tell you right now how your case is gonna turn out. I would if I could. Been trying to find one of these that works, but none of ‘em do. If I find one, I’ll call you right away.” Twelve crystal balls later, he’s still searching.

And if you were to ask Smith why he does these things, these totally unnecessary but completely charming things, he’ll tell you that he simply can’t help himself. He loves whimsy.

“You know, some of the things in this office have nothing to do with anything,” he’ll tell you, as though you didn’t already know that.

He might be referring to the 6-foot tall bonsai tree standing by the window that was given to him 30 years ago when it was just “an itty-bitty desk thing.” Or maybe he’s talking about the literal pile of rocks that sit in a bowl on a shelf.

“They’re little curiosities. I mean, I bet you don’t have one of these,” he says, grabbing a wind-up toy scorpion and letting it inch across the table. “I mean come on. That’s fun.”

This is the way Smith explains most things in the Starship Archie.

Or “That tickles the hell out of me.”

There are some things so weird, though, even Smith doesn’t know what to make of them; mostly gifts from his granddaughters, or his friend Fred, who “always finds the darndest stuff.” But you can’t throw away a gift, Smith explains, and it would be ungracious not to display one.

Hence, his tchotchkes take up most of the space on his shelves and room in the seemingly infinite drawers of his desk.

However, there is one surface in Smith’s office that’s empty: a long wooden table just beyond the command post.

If you ask Smith why that is, he’ll tell you that this is where the serious business happens. Opposing lawyers argue over this table. Agreements are reached around it. Civilians’ fates are decided.

“We can get down to the real juice here,” he says.

But of course, the table is also used to celebrate staff birthdays, and, during the holidays, Smith uses it to display his “Carolina Christmas tree,” a little plastic evergreen with red tinsel. When there’s no seriousness to attend to, Smith wants this table to serve the same function as “the kitchen table in your mom and dad’s house.”

The same goes for his red leather couch, which he hopes will remind you of your living room sofa at home. And for his two granddaughters, it does.

Whenever they come to visit, after tiring themselves out with their grandpa’s toys, they’ll inevitably pass out on this red couch. At which point Smith will go into his wardrobe, grab one of his two judge’s robes, and drape it over them as a blanket. The blanket-robe is easily differentiable from the robe-robe. It’s a significantly lighter shade of black, faded and frayed from years of naps. He doesn’t mind though. He only really needs one.

Smith knows that he’s got an unusual number of knickknacks for a county clerk, or anyone for that matter. But he also knows that a little joy can go a long way in a courthouse. And even with all his things, Smith can get down sometimes.

On these rare occasions, he’ll open a drawer at the bottom of his desk, and reach for a manila folder labeled, in his carefully penciled script handwriting, “Things Worth Thinking About.”

It’s filled with old newspaper and magazine clippings, notes from his granddaughters, and printed-out mantras. If you ask, he’ll take some of his favorites out and show them to you. But when you hand them back he’ll say “I’m not tryna be profound or anything” and divert your attention to the new model airplane Fred just bought him.

If you ever do have the pleasure of visiting the Starship Archie, on your way out, after Smith has offered you a parting mint, but before you’ve reached the doorway he might say, “I don’t wanna give the impression that I’m a lunatic, but I just like to enjoy life.” And you might think to yourself: boy, did “Law & Order” get it wrong.