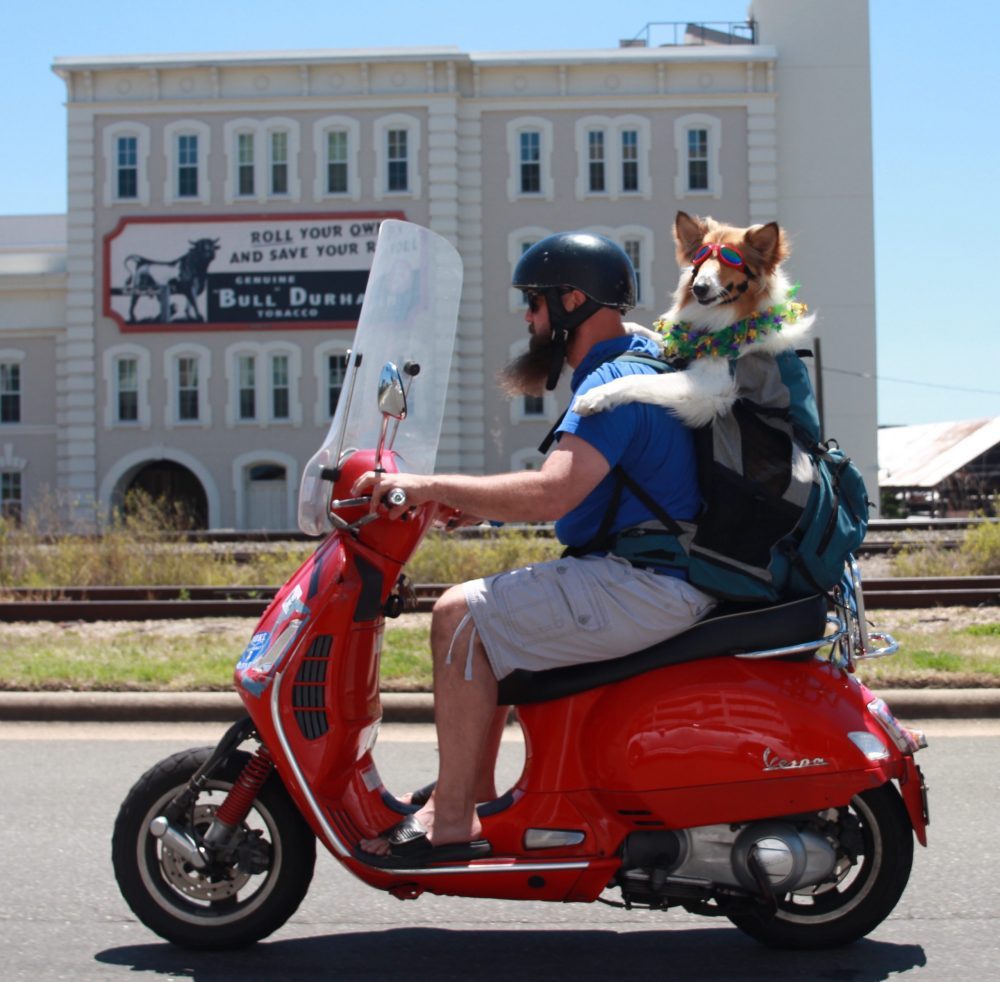 A man, a dog and a scooter

On a Thursday afternoon in Durham, traffic begins to slow on West Main Street as drivers gawk and smile at a cherry red Vespa. Pedestrians turn and pull out their phones to take a photo of the odd spectacle in front of them. They need a picture because otherwise their friends may not believe them.

This is what they see: A man and a dog riding a scooter.

The man has Ray-Bans and a thick brown beard. The dog, strapped to the man in a K9 backpack, is a brown and white collie wearing bright red goggles and a colorful tulle collar with sequined stars.

As they ride, the man stays focused on the road ahead, but the dog, Miss Betty White, seems very aware of the paparazzi. Her tail wags under the nylon pack that secures her to the man’s back. She turns and tilts her head slightly, striking a pose.

In a year of turmoil and doubt, the sight of a man and a collie on a Vespa evokes a momentary burst of joy. For David Cunningham and his 14-month-old dog, it is just another ride.

Cunningham, a 43-year-old bartender, grew up in Ohio surrounded by dogs. They were just some of the many beings running around the house with him and his six siblings. Since moving to Durham almost 20 years ago, he had always wanted a dog of his own, but never had the time. That changed when COVID-19 hit. Suddenly, West End Billiards, the bar where he works, closed, and Cunningham found himself alone with little to do. He found Miss Betty White in a kennel in Lexington, N.C.

A registered emotional support dog, Miss Betty, as he calls her, lifted him out of his quarantine blues. Since then, Cunningham’s buddies have told him he’s become a calmer, friendlier guy.

A peek in her closet

Off the scooter, they spend their evenings together, often dining at outdoor restaurants, or just watching “The Call of the Wild” on Cunningham’s couch.

Along with her diet kibble, Miss Betty gets a steak dinner once a week and a daily dog-friendly ‘pupcake’ or donut. Every Tuesday night the pair hits a local restaurant for date night. While Cunningham orders off the menu, Miss Betty snacks on a dairy-free peanut butter cup from her favorite dog bakery, Oliver’s Collar.

“She likes Reese’s just like her dad,” Cunningham says.

She earned her name because of her distinctive fur and as a tribute to the legendary actress: “With her big ole white mane like that, I was like, it’s gotta be Betty White. But there’s only one Betty White, so I insist people call her Miss Betty White.”

True to character, Miss Betty gets dressed up before an outing. A peek into her closet reveals dozens of outfits and accessories, complete with sequins, pom-poms, and ruffles. She has a rainbow tutu, denim overalls, and her “naughty Santa Claus outfit,” named because it is slightly too small and “her booty sticks out,” according to Cunningham.

Though luscious, Miss Betty’s shiny coat comes with a price. It has made vacuuming a crucial part of Cunningham’s daily schedule. That, along with her anti-shedding shampoo, ensures that his couch and cargo pants aren’t completely covered in dog hair.

Cunningham walks Miss Betty at least a half-mile four times a day, they go to the dog park once a week, and on the weekends they take hikes around the Eno, the Duke Forest, or the Al Buehler Trail. Miss Betty also has regular doggy-dates with her best friend Jack-Jack (a “little beagle lookin’ thing”) who lives in the neighborhood.

Miss Betty White’s active lifestyle keeps Cunningham in shape. He says he’s lost weight since he’s gotten her and developed a tan from being outdoors so often.

She isn’t always as sweet as she looks. When she gets restless, Miss Betty can misbehave. On one such occasion a few months ago, she chewed up the molding around Cunningham’s door.

He put her in a crate when he left home after that – until his guilt became too strong. Then Cunningham discovered the Furbo, a remotely operated camera that lets you see, talk, and toss treats to your dog when you’re not home. It’s even got an infrared camera so he can see Miss Betty in the dark.

In between customers at the bar, Cunningham will open the app to find Miss Betty White “laying up in the window sill like a cat.” He’ll use the microphone to get her attention, and then shoot a few treats onto the rug for her to find.

She has become something of a local celebrity. During their scooter rides, drivers often swerve to take photos to post. To Cunningham’s surprise, Miss Betty’s fan club stretches beyond Durham. He said she’s been recognized in Hillsborough, without the scooter.

For fans who want to keep in touch with Miss Betty, she has her own Instagram page.

One post reads: “I love my human!!! Steak and eggs for breakfast…was not expecting that.”

Cunningham grins.“I’m that guy. I used to make fun of those guys, but now I am one…I show my dog off like she’s my girlfriend or one of my kids.”

One post of Miss Betty as a puppy sitting in the grass is Cunningham’s favorite. He’s thinking he may get it as a tattoo.