A Durham Moment: “We just roll on. That’s how it works.”

Major the Bull, a 10-foot, 2,500-pound, bronze statue who watches over downtown Durham from his brick pedestal, is a symbol of strength, power and pride. And, on Fat Tuesday, he dons a bright pink tulle tutu around his waist.

Hanging around Major’s neck is a yellow, green and purple sign made out of duct tape. “Happy Mardi Gras,” it reads. He stands frozen, waiting for the celebration to begin.

The sound is faint at first, but when the parade of krewes rounds the corner onto the plaza at 6 p.m., a symphony of trumpets, drums, tubas and trombones bursts through the air.

People flood into the square, turning it into a dancing sea of colors and sparkles.

An older gentleman frolics around in a pink leotard, tutu, tights and bright red lipstick, his shoulder-length gray hair gelled back behind his ears. Little kids run past him weighed down by dozens of beaded necklaces, sequined headbands and feather boas. At sudden intervals, the kids break out in cartwheels.

Some people have made their own outfits for the celebration. One woman is completely hidden under a crow costume on which she glued hundreds of black feathers. Another is barely visible behind a multicolored, papier-mache dragon head.

Others join the festivities in street clothes, beaming when fellow decked-out participants offer up handfuls of beaded necklaces.

At the center of the crowd are the Bulltown Strutters, who have run the event for over a decade. They lead the now-packed plaza in glorious renditions of “When the Saints Go Marching In” and “Second Line.” 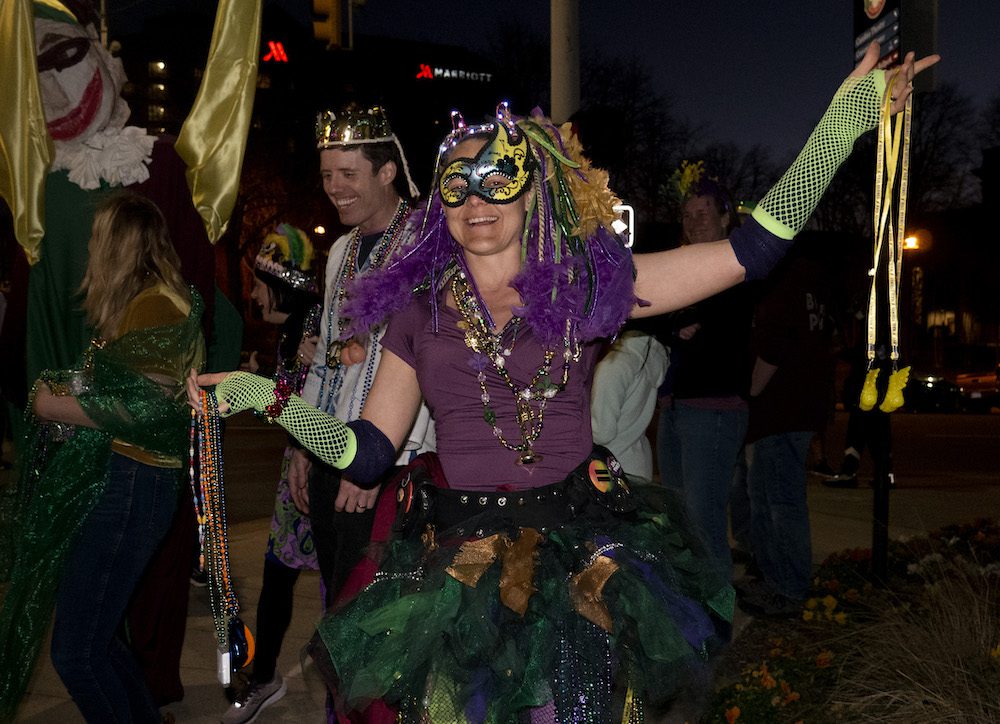 Kelley Grogan, a member of the krewe, marches around in a green wig carrying a sign that says “strut with us.” Her husband bangs on the drums a few feet away. Grogan’s never been to New Orleans, and this is her first Durham Mardi Gras, but she’s quite sure it won’t be her last.

“The camaraderie is amazing,” she shouts over the trumpets. “Everyone is just letting loose.”

In front of her, adults and children alike skip and hop around in circles, stomping on the bricks while they pump signs in the air.

One little boy with reflective sunglasses climbs up onto a stool and, gripping his silver harmonica with both hands, plays a unique version of what might be “Piano Man” before star-jumping back to the ground.

Other krewes include the Tic Tac Teauxs, the Krewe of Mischief and the Society of the Sacred Bull.

The last, a krewe of neighborhood kids from Trinity Park, shows up with a float made of painted wood and cardboard. It’s dripping in beaded necklaces, stocked with half a dozen King Cakes and has been signed by all of the krewe’s members for the last seven years. Its wear is starting to show.

“We’re probably gonna lose a wheel tonight,” says Walt Barron, one of the krewe’s adult leaders. “But we just roll on. That’s how it works.”

After a half hour of dancing, singing and twirling about in the plaza, the Bulltown Strutters decide it’s time to begin the procession down to the Blue Note Grill, where the celebration will continue into the night.

The music stops momentarily while the musicians gather their instruments and props and prepare to leave. Then after just a few seconds, a man in a chicken suit, carrying a massive tuba, shouts “NEXT SONG!” and the Strutters oblige, starting up again with “When the Saints” as they make their way down Foster Street.