Home » In God they trust: A courthouse prayer group offers a mindful break 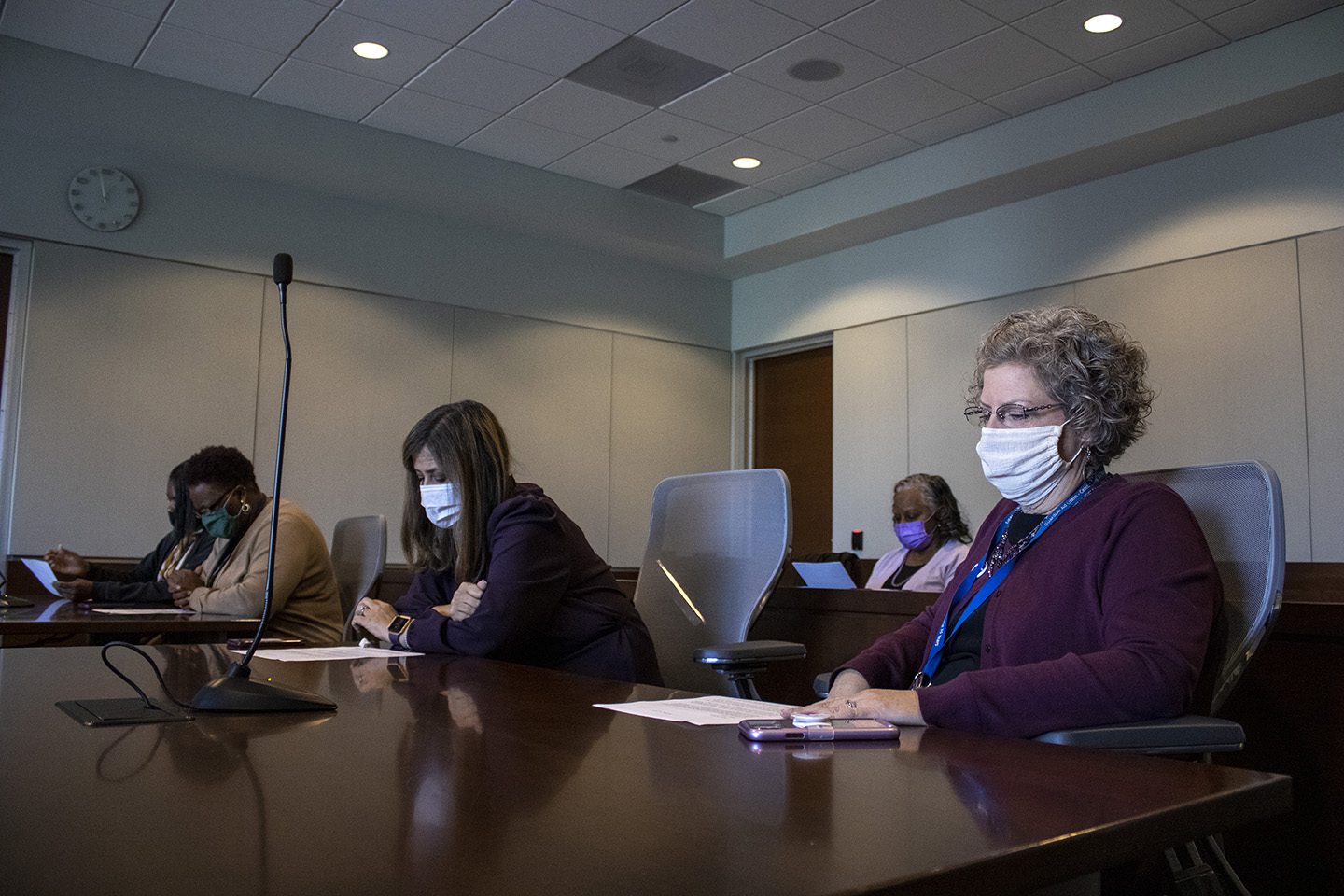 In God they trust: A courthouse prayer group offers a mindful break

In the Durham County Courthouse, a courtroom is a place for trials, arguments and rulings. It’s where attorneys lose cases and defendants receive jail time, a place where people debate, cry and curse. But on Wednesdays from 12:45 to 1:00pm, one courtroom on the second floor becomes a sanctuary for the courthouse staff prayer group.

To its members, the group is a safe haven – a mindful escape from the daily chaos of their jobs.

Chief District Court Judge Pat Evans joined 15 years ago as an attorney. Today, she attends every meeting and leads most prayers.

“It’s like our anchor,” Evans says. “In courts, we see a lot of stuff. It’s very traumatizing, but we always know that we can come here and be rejuvenated to finish the rest of the week.”

In court, God’s name is thrown around as a matter of procedure. Witnesses must place their hand on a Bible before they testify. They swear by God “to tell the truth, the whole truth, and nothing but the truth,” but rarely with any religious conviction. The prayer group wants to put meaning back into these words.

It was started in 2001 by now-retired clerk Darlene Pate to unite the courthouse staff. Pate wanted to remind them of their shared faith and give them a space to reflect.

Each week during their lunch breaks, judges, magistrates, translators and prosecutors borrow the courtroom of Clerk Archie Smith III —a judge and chief administrator in the courthouse— to host their prayer session.

Courthouse interpreter, Maria Owens, comes from civil court. She spent the last half hour translating for a couple’s custody hearing. She mediated as a mother and father fought over their infant son.

Evans comes from traffic court, where she had a full docket. Her afternoon promises more of the same.

After half a dozen other staff members enter, they arrange the desk chairs from the lawyer’s tables into a rough semi-circle. Sometimes, they turn off the fluorescent lights, letting the afternoon sun spill through the windows.

These adjustments convert the courtroom from a place of tension to a peaceful oasis.

A small printed packet guides the group. It provides a theme, a piece of scripture and a paragraph or two of insight.

On October 6th, the theme is “helping one another.”

“Encourage one another and build each other up… always strive to do what is good for each other,” one member reads.

Then she asks each participant what they want to pray for.

Darrin Corbin, a District Court magistrate, mentions his stepfather who suffers from congestive heart failure. While Corbin is in this prayer meeting, his stepfather is in a hospital in New York.

Owens would like to pray for her mother-in-law, who recently suffered an aneurysm.

Evans echoes those prayers and adds one of her own: that people will vote in Durham’s municipal primary election. Then she leads a prayer.

Eyes close and heads bow. Some people rock back and forth in their chairs. They nod, whisper prayers of their own, and hum on beat with the judge’s voice. Every few words, someone offers “yes, Lord” or “thank you, God.”

When the session ends, participants linger, joking and catching up. They comment on each other’s outfits, especially those of the judges, who are rarely seen sans long black robes.

In two decades, the group has almost never missed a meeting. It’s lasted through a building move, multiple retirements and now, a pandemic.

As COVID-19 raged through North Carolina, the courthouse stayed open, so the group continued to gather there. Numbers dwindled, but those who couldn’t come sent in prayers from home. Those who did come practiced social distancing. At each meeting’s end, in lieu of parting hugs, they took turns tapping elbows.

“We never considered not meeting,” Evans says. “We didn’t sit up next to each other, but it was even more important that we gathered and prayed and sought God’s protection together.”

The prayer group is not publicized around the courthouse, but people from all departments show up. Though it is a Christian prayer group, all are welcome. And by gathering during their personal lunch breaks, Evans says, the group avoids any conflict between church and state.

On some weeks, the clerk’s courtroom is full, with a dozen staff filling the gallery. On others, three people may meet.

Brittany Clinton, an assistant district attorney, started coming to sessions a few months ago. Like most new members, she heard about the group “through the grapevine.”

In a job where uncertainty is guaranteed, the prayer group gives Clinton something to rely on.

“After we finish each session, it’s like a breath of fresh air,” she says. “It makes me feel a little bit lighter, like I can go ahead and make it through the rest of the day.”

Walker has attended prayer group meetings for over five years. She’s saved every printed packet, storing them in a drawer at home.

“I like to pull them out and read them from time to time,” she says. “I can look back and see that my prayers have been answered.”

Evans has had her prayers answered too. For one, her husband, whose medical issues heighten the risks of severe illness from COVID-19, has stayed healthy throughout the pandemic.

But a prompt in a recent meeting reminded her of one prayer she’s still waiting to see answered. “Think of something you’ve given up on,” it read. “Ask God to show you how He’s still working on it.”

For the past 30 years, Evans has prayed for the violence in Durham to stop.

“Not to be curtailed, but to totally stop,” she says.

Her criminal court docket is too long.

In 2020, a record-breaking 318 people got shot in Durham County, nearly a 70% increase from 2019. Though in line with gun violence trends globally, these numbers are hard for Durhamites to hear, especially those who work in the courthouse.

In this meeting, Evans prays for something to change. After a moment of silent reflection, she unclasps her hands and stands up. Then she turns to Clinton, gives her a light elbow tap, and together they walk into the hallway.

“See you next week,” Evans says.

It’s not a question. It’s a promise.

At the top: A group of courthouse staffers meet in their Wednesday prayer group. Chief District Court Judge Pat Evans, seated in the back, often leads the group. Photo by Josie Vonk, The 9th Street Journal.