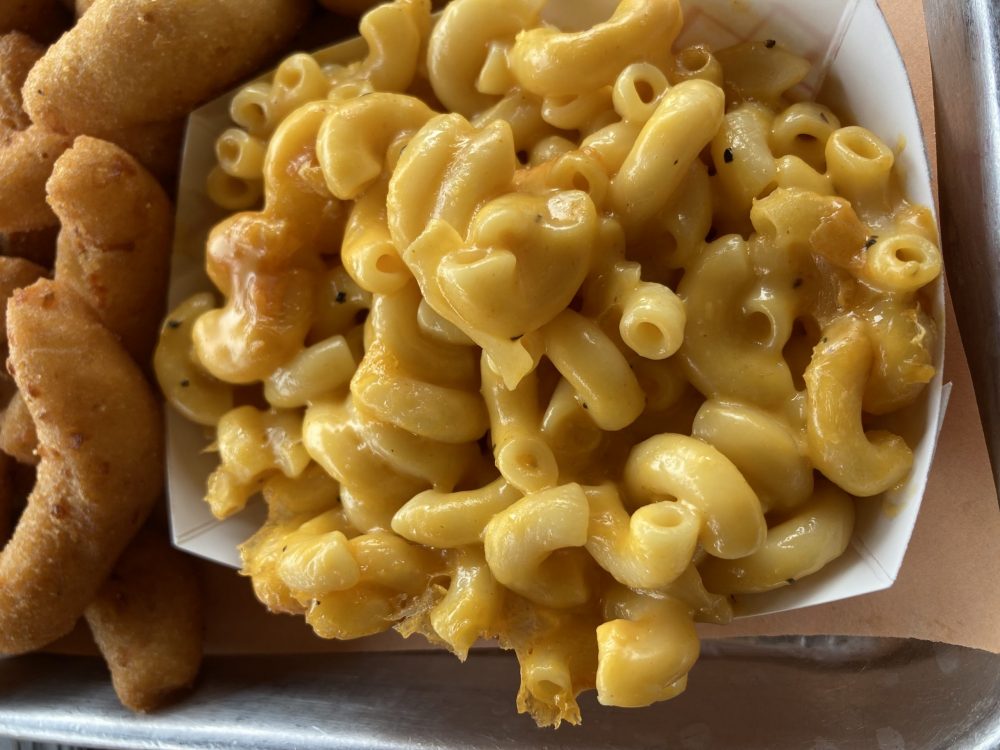 The search for Durham’s best side of mac and cheese

At a barbecue restaurant, meat is the main event. But no heaping serving of Durham barbecue — whether pulled, chopped, wet, or dry — can stand alone. It needs sides, be they slaw, beans or something more adventurous. For me, the most important side is mac and cheese, and Durham chefs keep it simple.

Regardless of the restaurant, the foundation is the same: a classic macaroni elbow—farfalle or ditalini would be sacrilegious—and always well-cooked. Al dente is a foreign concept to a pitmaster. When it comes to cheese, cheddar is a safe bet and powder is a possibility, but there shouldn’t be anything along the lines of an aged parmigiano-reggiano. A few daring chefs will sprinkle in some black pepper, but there’s no place for the likes of lobster or truffle oil, which may be tastefully (or pretentiously) added at a restaurant where plates aren’t separated into quadrants.

To figure out who does it best, I embarked on a mac and cheese tour of Durham. In two weeks, I visited five barbecue restaurants, reporter’s notebook in hand, and sampled—or, more accurately, indulged in—each version of the treasured side. Here’s what I found.

The lunchtime crowd has formed a line to the door at the Backyard BBQ Pit when I arrive. I spend my wait digesting the sprawling chalkboard menu, admiring the graffiti-covered walls, and gawking at the overflowing cafeteria style buffet.

“What can I getcha, baby doll?” asks my server once I reach the front of the line. The steam rising from the buffet table fogs its plexiglass barrier, so she walks me through the sides in a friendly southern drawl. She tells me that I shouldn’t miss out on the candied yams, which she prepares from scratch every morning. There isn’t enough room in one black styrofoam takeout container for all of her recommendations, so I find myself at the checkout counter with two combo platters and four different sides (candied yams included).

I open the container to find a heaping side of mac and cheese, spilling out of its quadrant and shining with the oily glow of melted cheddar. I reach for my plastic fork, but soon find that this mac and cheese demands a spoon as I can’t afford to have any of the cheesy sauce slip through the tines.

The star of this dish is the generously apportioned cheddar cheese that envelops the elbows. It mixes with collard greens and sweet potato in the happiest of accidents as the sides begin to blend together, creating new flavor combinations. After polishing off the last spoonful, I notice a small pool of oil where the mac and cheese once rested. Usually this would concern me, but I remind myself that Backyard BBQ’s mac and cheese is not meant to be refined (or healthy); It’s comfort food, and if an ungodly amount of cheddar cheese is required to make it right, so be it.

Once seated at a high-top table with my feet dangling above the floor, my server brings over a complimentary basket brimming with biscuits and hushpuppies and invites me to take all the time I need with the laminated menu. Her friendliness is a welcome counterpoint to the ominous collection of cleavers that adorn the red wall to my right.

My side of mac and cheese comes congealed in its small white bowl, shaped as if plated with an ice cream scooper. The yellow dome is flecked with black pepper and intermittent globs of melted, stringy cheddar cheese. My mouth doesn’t water, but I pick up my fork and break into the sphere.

At first, I’m disappointed by the texture—a graininess in the sauce and overcooked noodles—but then the flavor surprises me. This mac and cheese tastes homemade, like your grandma cooked it for the family reunion (and maybe left it on the boiler a few minutes too long). At first, the dominant flavor is white cheddar: mild, creamy, and subtly salty. But then, a pleasant black pepper kick rises from the back of my tongue, interrupted by the occasional hidden cheddar gob, delightfully chewy and sharp. The mixture of cheeses and spices don’t melt together seamlessly, leaving the sauce separated in places, but this gives the dish character. Like a home cooked meal, you can tell it’s made from scratch.

Less than 30 seconds elapse between the moment I place my order at Picnic and when I’m handed my mac and cheese in a folded brown paper bag with my name on it. At one of Picnic’s outdoor wooden tables, I open the bag to find a packed plastic deli container, yellow elbows pressed against its clear lid.

My fork pierces the noodles with ease, a sign of too much time spent in boiling water. Indeed, Picnic’s mac and cheese is meant for the lazy patron, it requires little chewing as the noodles break apart with no effort. The cheese sauce is sticky. It lingers after I swallow, coating the roof of my mouth. Its primary flavor is Velveeta, with a slightly sweet and tangy aftertaste from the addition of pimento cheese.

Eating Picnic’s mac and cheese won’t be a new or surprising flavor experience, but it will transport you back to the microwavable meals of your college years, and it’s that familiarity that keeps my fork returning to the container.

As the waitress takes me to my table at Bullock’s Bar-B-Cue, I walk past the restaurant’s “wall of fame,” crowded with signed pictures from celebrity patrons, including Joe Biden and the former editor in chief of Vogue. Once in the dining room, I can’t help but notice that I am one of the few patrons without gray hair.  For a weekday lunch, the restaurant’s brown leather booths are remarkably full with regulars who don’t bother opening their menus. My waitress tells me that she’s been working here for over 20 years and serving certain customers daily for just as long.

Unfortunately, while the rest of Bullock’s feels deeply authentic, the mac and cheese does not. The elbows are cooked well, but the bright yellow sauce that coats them is bland and chalky. Its one-note taste resembles cheddar cheese, but its grittiness and plasticky aftertaste suggests a sauce made from powder. That along with the pasty mouth-feel compels me to retire my fork after a few bites. Bullock’s homey atmosphere and warm service made me want to love their mac and cheese, but it didn’t stack up. The restaurant’s barbeque certainly lives up to its reputation, but the mac and cheese tastes like an afterthought.

The first thing I note when I walk into Q Shack isn’t the dark red walls or the glowing neon signs or the taxidermied bull’s head. I happen to arrive at Q Shack as a fresh tray of baked mac and cheese is placed into the steam table. I watch, mesmerized, as the server breaks into the cheesy shell with a spoon and transfers hefty, steaming scoops of elbows into paper containers.

Metal cafeteria tray in hand, I slide in among the lunch crowd on a colorful vinyl chair and carefully consider which part of the mac and cheese I should try first. A crispy bite from the top? A silky forkful from the middle? One of the chewy, cheesy clusters sprinkled throughout? Settling on a surface bite, I dig my fork in and lift it up, watching strings of cheddar stretch and pull.

The sauce is sticky and tastes sharp and salty with a hint of black pepper. The noodles near the surface have dried ever so slightly so they crunch, while the ones in the middle are soft and tender, but not mushy or broken. No other restaurant achieved this textural variation. Before each bite, my fork wanders above the noodles as I’m momentarily unable to decide how to craft the next one.

This mac and cheese is so enjoyable, I hardly remember to eat the chopped pork that is intended as the main dish. Once I do, I eat it only sparingly to save room for the rest of the macaroni.

Photo at top: Q Shack’s side of mac and cheese, with a helping of hush puppies on the left. Photo by Nicole Kagan – The 9th Street Journal