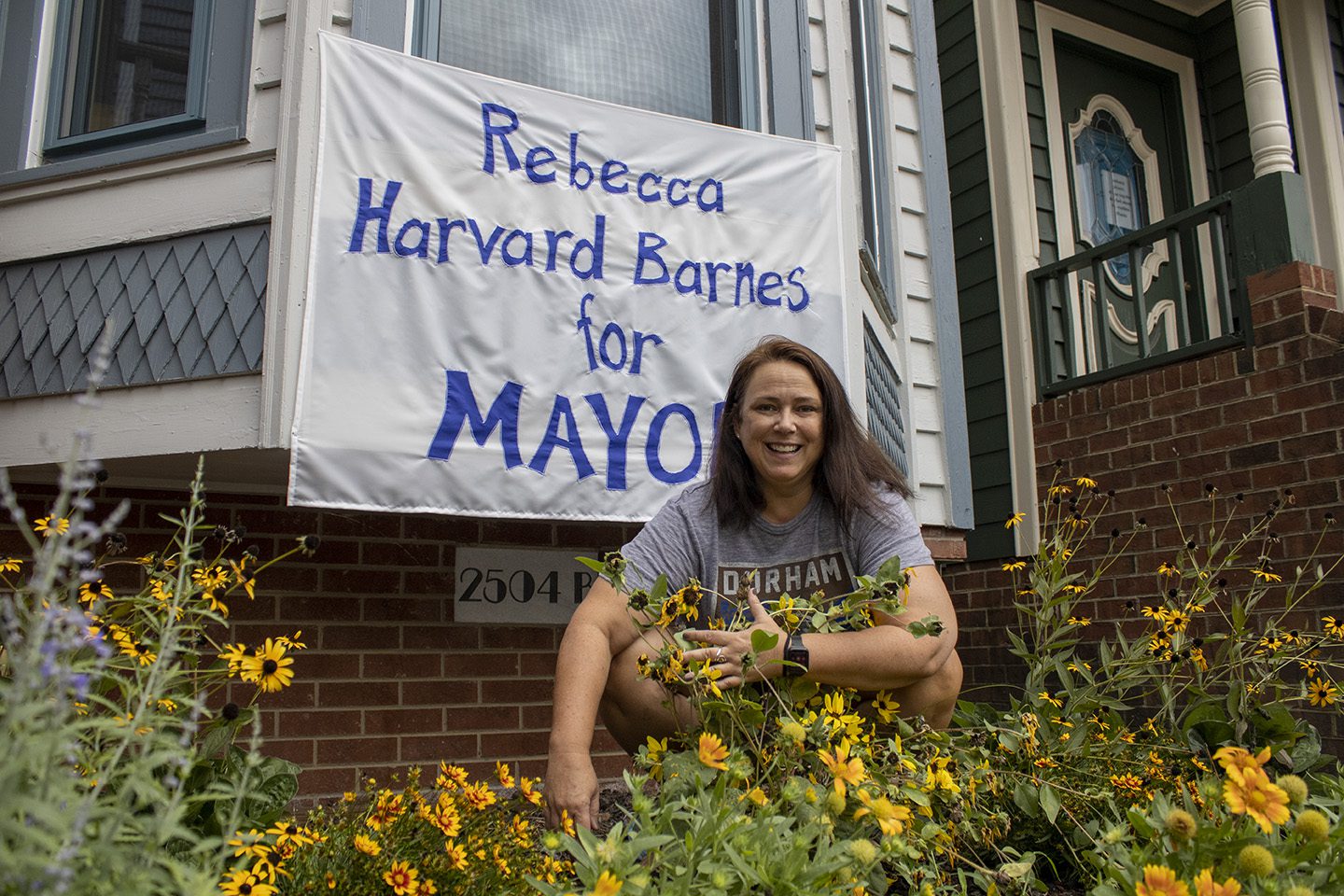 When mayoral candidate Rebecca Harvard Barnes talks about Durham, her eyes widen and her face lights up.

She’s not a seasoned politician like other candidates. She’s never even held public office, and most of her work has been faith-oriented. So why is she running?

The 52-year-old candidate was prompted to run after seeing an onslaught of political, economic, and health crises afflict the city. She wants to win, but even if she doesn’t, she hopes her long-shot candidacy inspires people to get involved.

“I want to lead by example. I want to show people that what they can do is get up and do something,” she said. “My ‘doing something’ is running for mayor.”

If elected, Harvard Barnes would use continued investment and creative policy to address affordable housing. Climate change and racial equity are among her other top focuses.

Despite her lack of political experience, she thinks she’s ready to lead Durham. Her father, Joseph Harvard, pastored the city’s First Presbyterian Church, and she’s worked in churches as a lay minister on-and-off for 20 years, most recently educating kids and teenagers. She has also worked for Habitat for Humanity, a Christian nonprofit that builds homes for underserved communities and advocates for just housing policies.

Harvard Barnes said she has a knack for “building bridges, bringing people together, and helping people work through differences they may have.” She would facilitate smooth conversations between different parts of city government because of her experience navigating the many sects and departments of churches, she added.

When finances got tight during the pandemic, she obtained a real estate license and joined a firm that she hopes can help her advocate for affordable housing.

A vision for Durham

“I’m a firm believer in not having to reinvent the wheel,” she said. “There are so many programs all across the country where affordable housing has been addressed in creative ways. We’ve just got to look at them and make some decisions based on what’s been successful.”

Climate change preoccupies her. She thinks of overflowing landfills and global warming often.

“I lose sleep over it,” she said. She believes current national and international emission reduction goals aren’t ambitious enough, and would amplify Durham’s climate change initiatives as mayor.

Durham has already experimented with reparations, an idea Harvard Barnes is open to despite saying it is not a “cure-all.”

She’s thought over initiatives related to police reform and addressing poverty and gun violence, but her primary plan is to listen. That, she said, is what people need to do “in order for there to be any kind of equity.” Although she has several ideas about how she would approach policy, Harvard Barnes stresses her openness to ideas.

She also understands, however, that her chances of success in the October primary are slim. Nevertheless, she sees her campaign as a vehicle for awareness. She said she won’t waste resources on signs and stickers, but plans to wear a sticker that says, ““I’m Running for Mayor!,” so people will talk with her and engage with local politics.

Win or lose, Harvard Barnes will keep advocating for Durham. She encourages others to do the same.

”The decisions made by the city you live in affect your life and affect the lives of people around you,” she said. “ That’s the reason I’m doing what I’m doing…to wake people up.”

At the top: Mayoral candidate Rebecca Harvard Barnes poses with flowers in front of her home. 9th Street Journal photo by Josie Vonk.