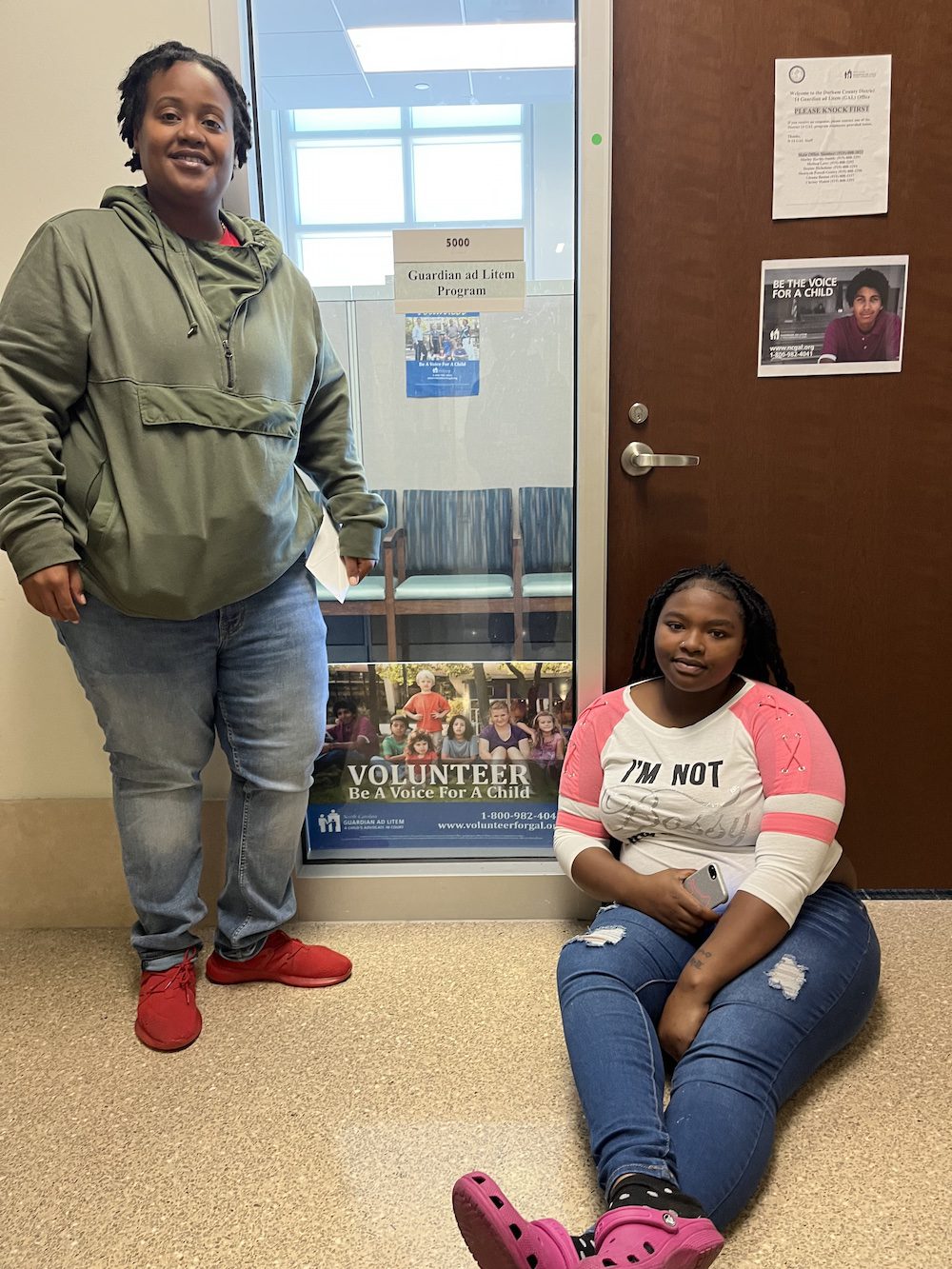 Kellie Smith wants to spend the holidays with her children.

“I missed my kids having their first steps, them crawling for the first time, them saying their first words,” she says outside the Durham County Courthouse, tears streaming. “I’ve missed so much of their life. I’d be damned if I missed another second of it.”

It is a Tuesday in early October, and Smith’s fourth trip to the courthouse in a week. Her children, Ah’miyah, 3, and Phillip, who turns 2 in December, were taken into custody by Durham County Child Protective Services (CPS) in 2019 and 2021. Smith is at the courthouse because she has requested a hearing to ask to have her kids with her for Halloween or Thanksgiving. Her request is denied.

Smith, 20, lives with her fiancé and baby boy, Takiel. Every other week, Smith sees Ah’miyah and Phillip for two hours.

On December 15, Judge Doretta L. Walker will oversee a hearing that will determine whether Smith regains custody. For now, Smith is one of hundreds of parents in Durham – many of them Black and brown mothers – fighting court battles to get her kids back. These mothers are navigating a child welfare system whose legal hurdles and decisions seem to them, at times, arbitrary. Smith’s journey with CPS offers an inside look at one of these cases.

Joy Cook, a spokesperson for DSS, said the agency would not comment on the controversy surrounding CPS for confidentiality reasons.

In 2020, 632,000 children entered the foster care system in the United States. The federal government spends nearly $8 billion on foster care each year.

The Abuse, Neglect, and Dependency page on the North Carolina Judicial Branch website says that if “the facts reported fall within the legal definitions of abuse, neglect, or dependency,” CPS will investigate the case and determine “what is needed to ensure the child’s safety.”

Foster parents help scores of  children, but the system is imperfect. Studies show that nationwide, children in foster care are at a higher risk for unemployment, involvement in the criminal legal system, mental health disorders, sexual abuse, and homelessness.

Anti-CPS organizations have popped up throughout the country. They include national groups such as The upEND Movement, as well as local organizations in New York and Wisconsin, among others.

Former Wake County CPS investigator Amanda Wallace created Operation Stop CPS in 2021. The organization is currently helping six women—three in Durham, one in Raleigh, one in California, and one in Kentucky— to get their children back. The group has come under scrutiny in recent months for its protest tactics, which include showing up at government officials’ houses.

Child welfare officials have also accused Wallace of practicing law without a license. Wallace, who does not have a law license, disputes the allegations.

Nationally, Black children are removed from their homes at higher rates than other children. Locally, Wallace alleges, CPS officers frequently appear in predominantly Black neighborhoods like Smith’s. “Especially in our culture, CPS has been able to infiltrate our community and people use it as a tool against each other in these situations,” says Wallace, who is Black.

On December 11, 2019, Smith, then 16, and her mother, Sharron Dobaly, argued about who should claim Ah’maiyah on their taxes. Later that day, an angry Dobaly reported her daughter to CPS.

Smith and Dobaly have had a contentious relationship. Their fights were bad enough that the police were sometimes called to break them up. At one point, Smith says, she fled to her grandfather’s house and lived with him temporarily.

Dobaly told CPS that Smith had shaken her daughter. Smith denies that, adding that there are no medical records indicating Ah’miyah had been hurt.

Smith was furious. Earlier that day, she had visited her father, who had been shot and was recovering at the hospital. Her grandma had just died. She had strep throat and could not speak. Dobaly’s charge was the last straw. When the CPS agent arrived, she threw a cup, among other objects, at her brother Tyquis Dobaly.

The agent took Ah’miyah into custody.

Smith says that while she never hurt her children, she sometimes struggled with her temper. She grew up watching relatives abuse and lash out at each other regularly, which, she says, amplified her anger.

About a year after CPS took Ah’miyah, a social worker visited Smith and discovered that she and Phillip were at a friend’s house, court documents show. This violated a CPS order, which decreed that Smith could only keep Phillip if she was under constant supervision of someone age 25 or older. Smith was 17 at the time, and her friend was a teenager.

An adult was present but hadn’t been screened by CPS. Court records show that the social worker reported Smith, and CPS took Phillip into custody.

Smith also signed a document admitting to abusing her kids, after her son Phillip was taken. But Smith says she learned what was in the document only this year. She says she didn’t read the document when she signed it, and that her public defender told her to sign it.

The AHB Center for Behavioral Health and Wellness conducted a 20-page parental capacity evaluation in May 2022, on behalf of CPS.The report says that Smith “has the cognitive and functional abilities to provide a safe and stable living environment for her children.”

Since her children were taken, Smith has completed a parenting course, passed a Parental Capacity Assessment, attended regular therapy sessions, obtained a steady job at Wendy’s and found stable housing.

Smith says she has complied with CPS requirements. She doesn’t understand why she still does not have her children at home.

Smith has been in and out of therapy for much of her life, and has gone to sessions consistently since losing Ah’miyah. Her annual therapy report for 2021, which was given to the court, says she “feels [therapy] will help her get her children back” and “wants to experience less sadness and anger.”

Smith keeps logs of her visits with Ah’miyah and Phillip. On  recent visitation logs, she writes that Ah’miyah and Phillip gave “hugs and kisses” to her and to baby Takiel. She describes helping them write their names, put on their shoes, and resolve arguments with each other.

Each time, she says, neither of them want her to leave.

ABOVE: Amanda Wallace, standing, a former investigator with Child Protective Services in Durham, launched Operation Stop CPS in 2021. She advocates for parents like Kellie Smith, is fighting to regain custody of her two children. They are at the door of the Durham County Guardian Ad Litem’s office. Photo by Charlotte Kramon–The 9th Street Journal.